Weaving, Women, and Justice in Guatemala

Today in Guatemala's Supreme Court, closing arguments are being delivered in the trial of former head of state, Efraín Ríos Montt on the accusations of genocide and crimes against humanity.  This landmark case has taken years of patience and the steady call for justice from the affected indigenous communities of Guatemala. In the following blog post, I will outline how the art of Mayan weaving demonstrates a resilience of character that has enabled the women of Guatemala to endure generations of political violence and oppression.

During the Indian freedom movement of the 1920’s, Mahatma Gandhi promoted the spinning of Khadi for self-employment and self-reliance amongst rural villagers of India’s underclass. According to Gandhi, weaving was the heart of a local economy and was considered as necessary as breathing for the oppressed masses.  A similar thread of empowerment exists in Guatemala. 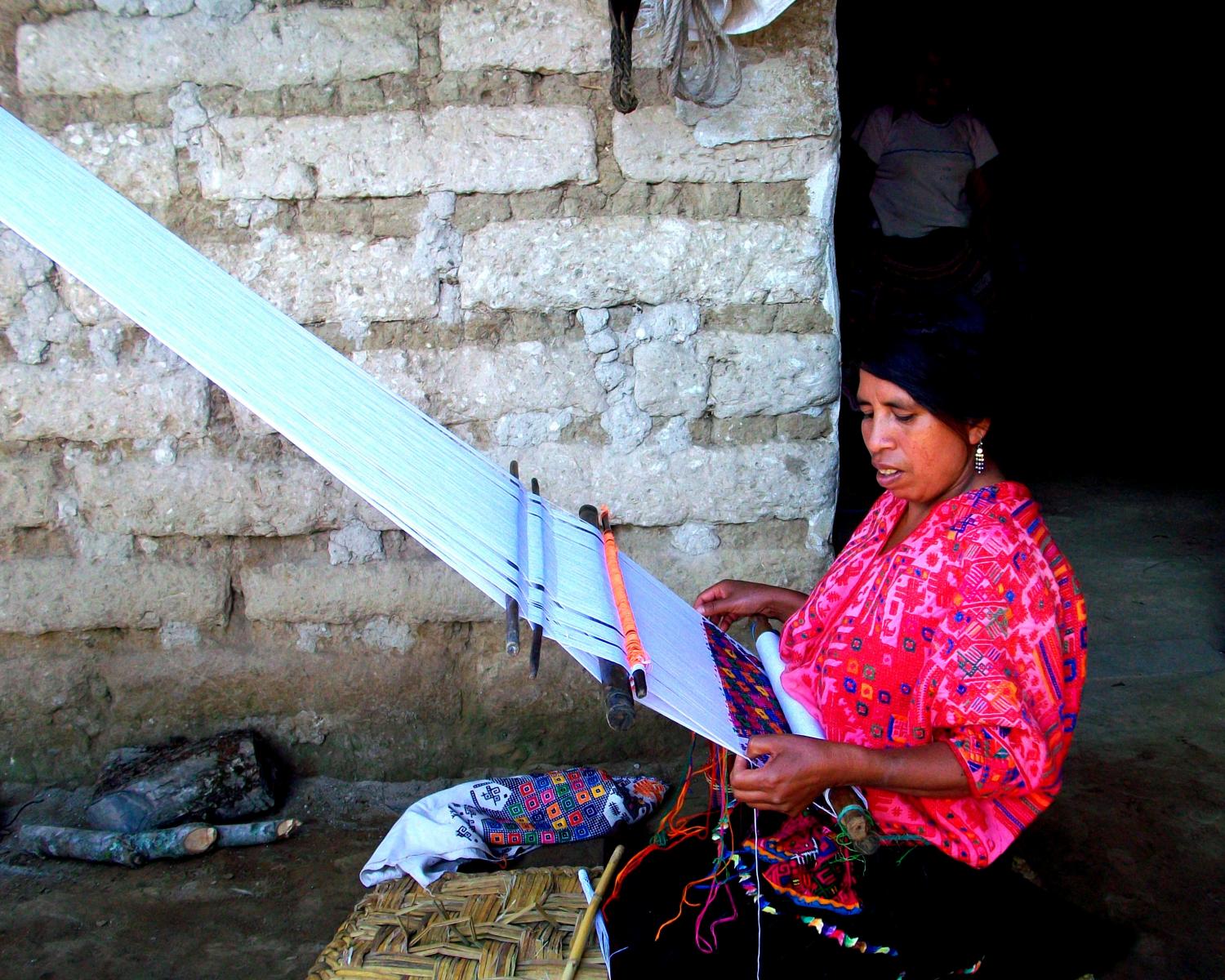 1 “in a very literal sense, the weaver becomes a part of the loom... if she is ‘strapped in,’ weaving can take place. If she is not, it cannot.” Chandler, Deborah, Senuk, Raymond E. Guatemalan Woven Wealth: Preserving a Rich Textile Tradition. Canada: Friesens Corporation, 2009. Print.

Just south of the Mexican border, Guatemala’s tapestry of traditional textiles remains a prominent feature in the indigenous Mayan communities.  Since pre-Colombian times, women have hand-spun and hand-woven their families’ traje (clothing) using the age-old back-strap loom. According to the Ancient Mayan Quiche (“Kee-Chay”) tradition, Ixchel, the female moon goddess has been weaving in this method since the beginning of time.

In the back-strap loom, the weaver physically creates the necessary tension to weave strands of dyed-cotton through the suspended threads.  As explained by author Deborah Chandler, one can imagine a guitar where the artist must physically sustain tension on the strings in order to create music.  Using this back-strap loom, women throughout the Western highlands of Guatemala create the fabric panels that compose their intricate traditional traje (clothing), including huipiles (blouses), tzutes (head wraps) and fajas (fabric belts).

In a similar fashion to Scottish tartans, each region in the Western Highlands of Guatemala exhibits a distinct weaving pattern, color palette, and material composition.  For instance, one can easily distinguish the heavily stitched maroon huipiles from the Patzun village of Chimaltenango from the Indigo and light blue vertical striped blouses of the Santiago village of Solola, (See Image 4 below). 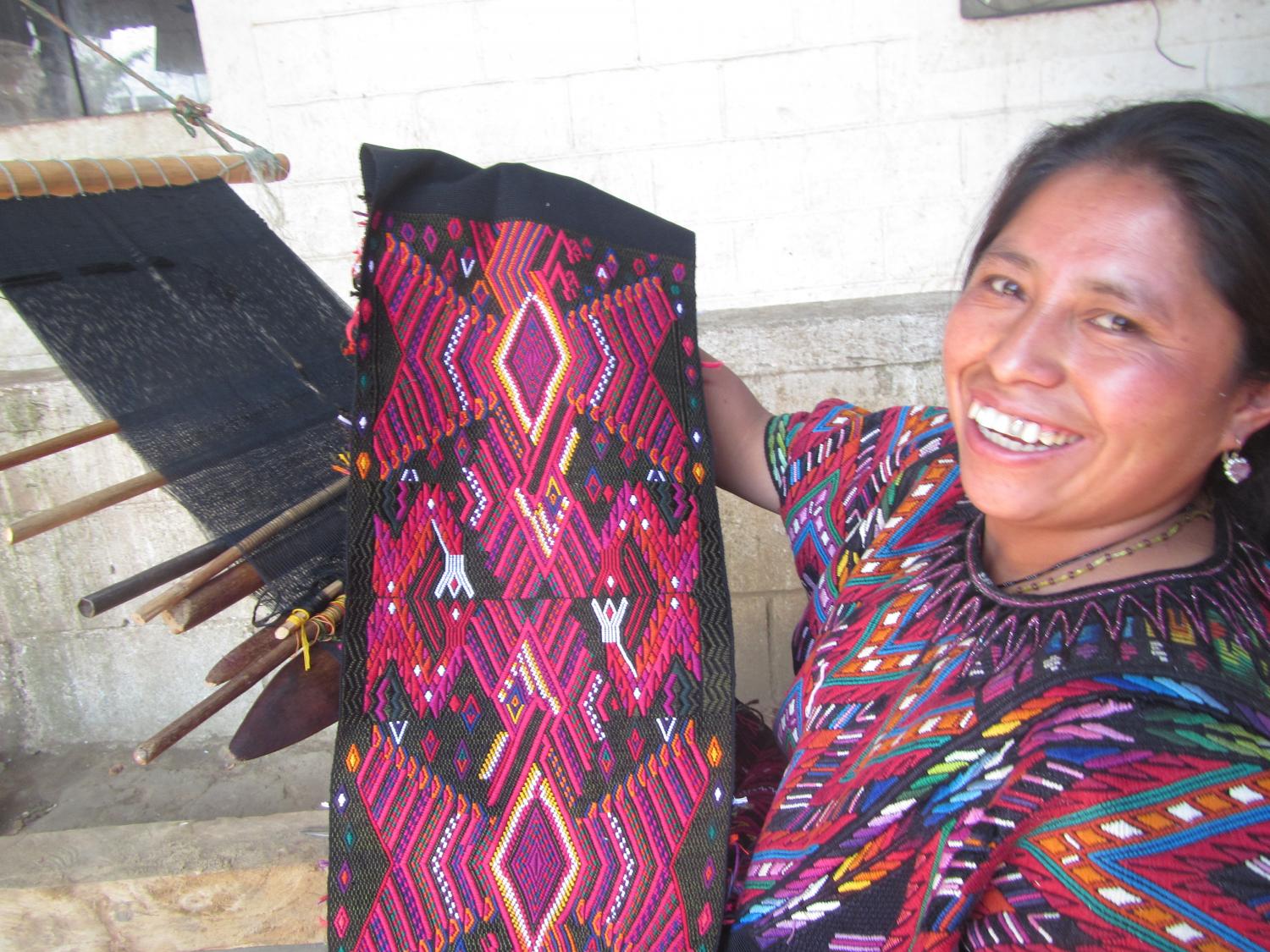 2 Marta, a microfinance borrower from the Western Highlands of Guatemala proudly displays a week’s worth of work. She follows a pattern taught by her mother, typical to the Chichicastenango village.

Much like a national flag, women wear their traditional traje as a proud representation of their hometown roots despite the fabric’s historical connection to the Spanish conquest. It is widely explained that colonial officials forced each community to wear a certain color and pattern to help in tax collection practices.  Furthermore, these community-specific fabrics were used by the central government during the Guatemalan Civil War (1960-1996) to target specific indigenous communities.

Former dictator, Efraín Ríos Montt is on trial in Guatemala City for his role in the systematic extermination of the indigenous Mayan communities of the Quiche department of Guatemala.  After obtaining political power through a military coup in 1982, General Ríos Montt re-issued a “State of Siege” throughout the country of Guatemala. His 17-month term as dictator is widely regarded as the bloodiest chapter during the country’s 36-year civil war.

Unlike previous stages in the civil war, (the Caribbean counter-insurgency battles, or urban Para-military death squads), the regime of Ríos Montt focused on isolating rebel guerrilla forces from their civilian support base in the Western highlands, specifically the indigenous communities of the Ixil triangle of Quiche. This effort, also known as “Plan Sofia,” has been well-documented by UN-sponsored Historical Clarification Commission of 1999 and was recently detailed in the award-winning documentary, “Granito: How to nail a dictator.”

Rebel-sympathizing villagers throughout the Quiche region were targeted by the Ríos Montt regime.  As a result, many women were forced to hide their traditional traje or exchange their huipiles for those of a neighboring region.  The continued “scorched-earth” campaign of Ríos Montt tallied 3,330 killings by the military during his first month in power (a rate of approximately 111 per day).  Remarkably, amidst all the political violence and destruction, the Mayan women survived and  their weaving continued.  ("Chapter 4: The 1980s". Shr.aaas.org. 31 January 1980. Retrieved 3 May 2013.) 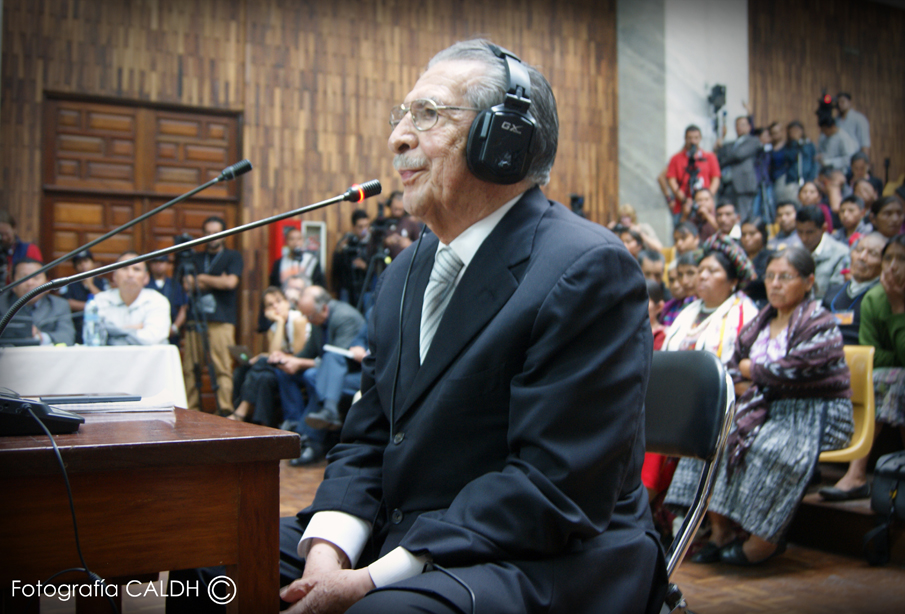 3 The trial of Efraín Ríos Montt is historic. Never before has a former head of state been tried for genocide in his own country. Notice the survivors from the Ixil Triangle of Quiche in their traditional traje. (Permission to use this photo obtained from Jose Rodriguez of CALDH. (Center for Human Rights Legal Action))

POST-WAR RECOVERY AND DEMAND FOR JUSTICE:

After the peace accords were signed in 1996, indigenous communities throughout the Western Highlands have been vigilant about cultivating their cultural heritage. Weaving is crucial to the cultural dissemination for future generations.  Much like a rite of passage, Mayan girls learn the patterns and folklore behind their village tapestry from their grandmother’s and mother’s teaching, (See Image 6 below).

Weaving also presented a form of communication or symbolic storytelling. The colors, designs, and patterns in traditional Mayan weaving all carry symbolic significance and have literally been woven into a community’s heritage. Weaving becomes the artistic canvas for the indigenous women of Guatemala to share and show their “Cosmo-vision” or world-view.  For instance, the white and black vertical stripes in the traditional traje of Solola region represent silver-lined clouds amidst a dark night.  For this community, they remind themselves of an ever-present hope in a sea of darkness, (See Image 7 below).

Despite pressures to hide their traditions or assimilate into a mestizo culture, the indigenous women continue “to struggle for [their] culture."

"Many of our male comrades recognize this wealth of knowledge that we women have. Our women have known how to struggle for our culture. It's women who preserve the art of weaving; we are the weavers. Our knowledge concerning weaving, our art is very advanced. That's why many people everywhere consider the Guatemalan woman to be an artist. And weaving is an art."  - Nobel Prize Laureate and Indigenous Rights leader, Rigoberta Menchú, 1983

In the trial of Efraín Ríos Montt, the prosecution has featured the testimonies of surviving victims from the affected region of Ixil, Quiche.  Nearly 100 brave witnesses from the indigenous communities have given testimony to forced displacement, torture, rape, and arson during the 1982 “scorched earth” campaign, (See Image 8 below).  Weaving often provided a catharsis of creativity for the surviving victims. Much like the coarse stitched thread and thick woolen blouses, the indigenous women of Guatemala have been conditioned to endure the hardships of their environment, (See Image 9 below).

I am personally convinced that this persistent strength has placed Guatemala at this “tipping point for justice” as coined by Pamela Yates, director of the award-winning Guatemalan Civil War documentaries, “When the Mountains Tremble” and “Granito: How to nail a dictator.”

Rigoberta Menchu recently explained that, “the dark forces in the country that orchestrated the genocide are united and strong.” But she insists that, “justice is the only way that we can dignify the victims, but currently we are facing a very complicated situation.”  In the face of extensive trial delays and a myriad of legal loopholes, it appears that a sentencing for Efrain Rios Montt is inevitable.  Members from all levels of society are now standing in solidarity with the indigenous men and women of Guatemala in their cry for justice.  But much like their traditional Mayan traje, this resilient hope has been and will be here for generations to come.

In the following interview, Raquel, an indigenous rights leader from Santa Cruz, Quiche, explains the cultural depth woven into the traditional Mayan traje. She also delineates the role that women have played in bringing the former Dictator Rios Montt to justice. 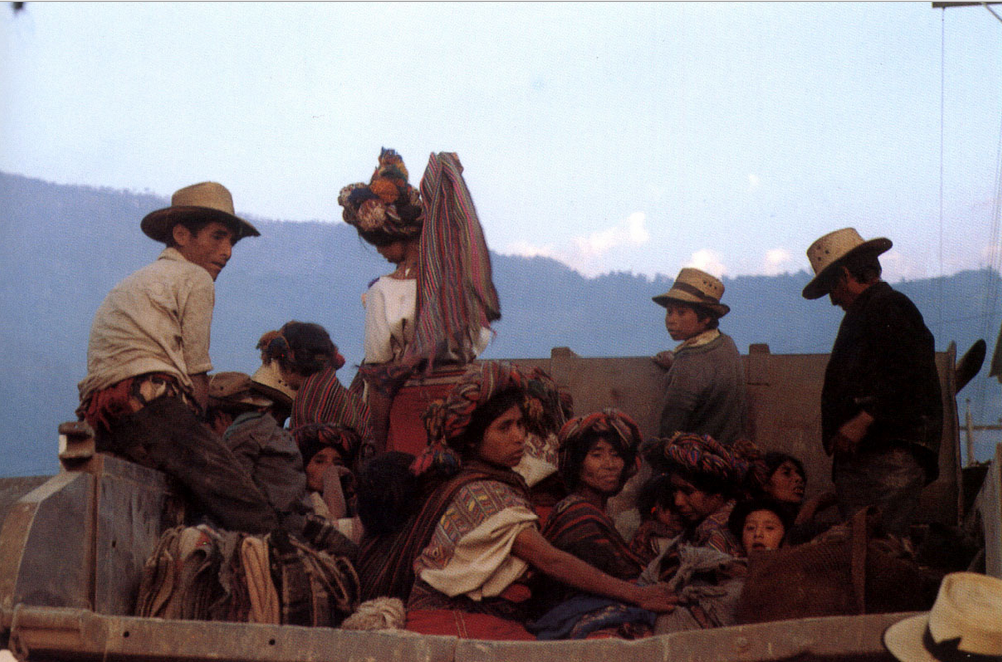 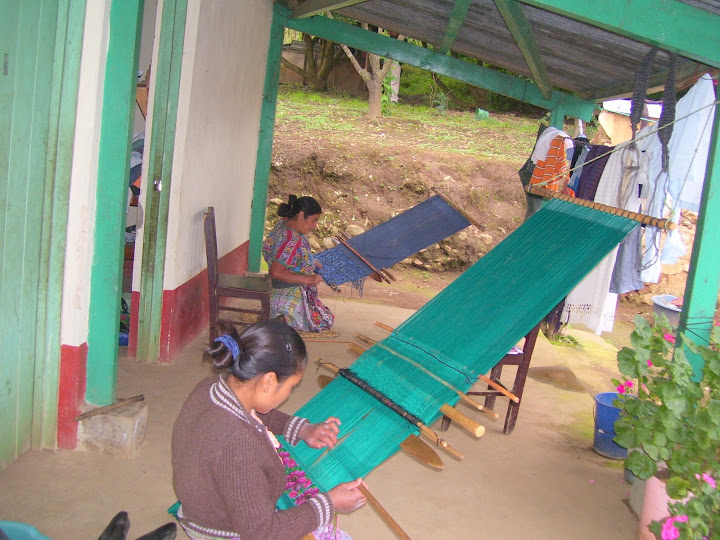 6 "Working in Community." Here, two microfinance borrowers from Friendship Bridge weave with a traditional back-strap loom. The first solidarity group formed within Friendship Bridge was composed of 20 surviving widows from the Quiche Region. 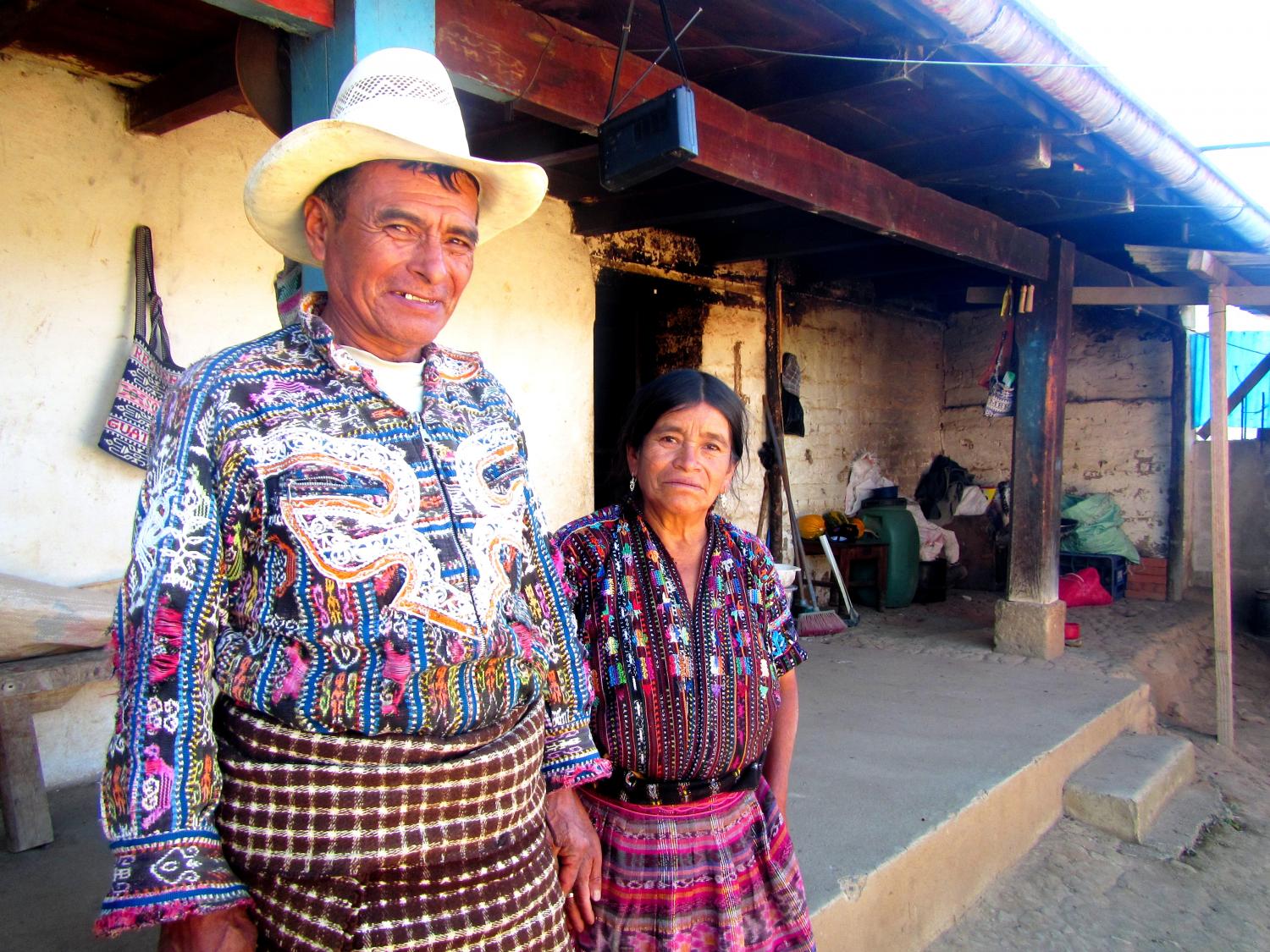 7 Notice the vibrant colors and detailed-stitching on the black fabric base of the traditional traje from the Solola region. Much of men’s fashion throughout the indigenous communities of Guatemala has adapted to western influences. But due to the primarily agricultural population in the department of Solola, traditional traje is worn by both men and women. 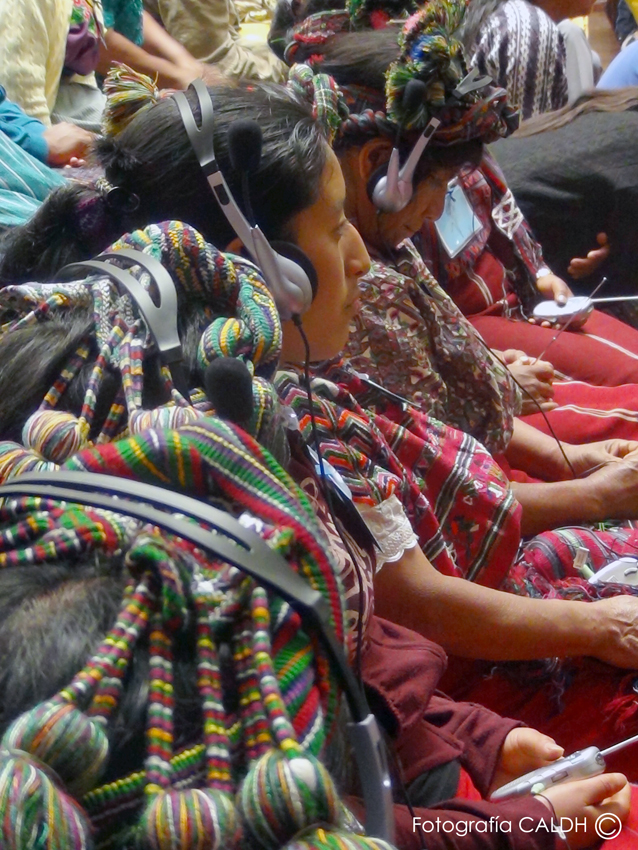 8 Female witnesses from the Ixil Trial of Quiche. Headphones were used throughout the trial of Rios Montt to accommodate some of the 23 different Mayan languages represented in Guatemala. (Permission to use this photo obtained from Jose Rodriguez of CAL CALDH. Photo credits: José Rodríguez CALDH (Center for Human Rights Legal Action) 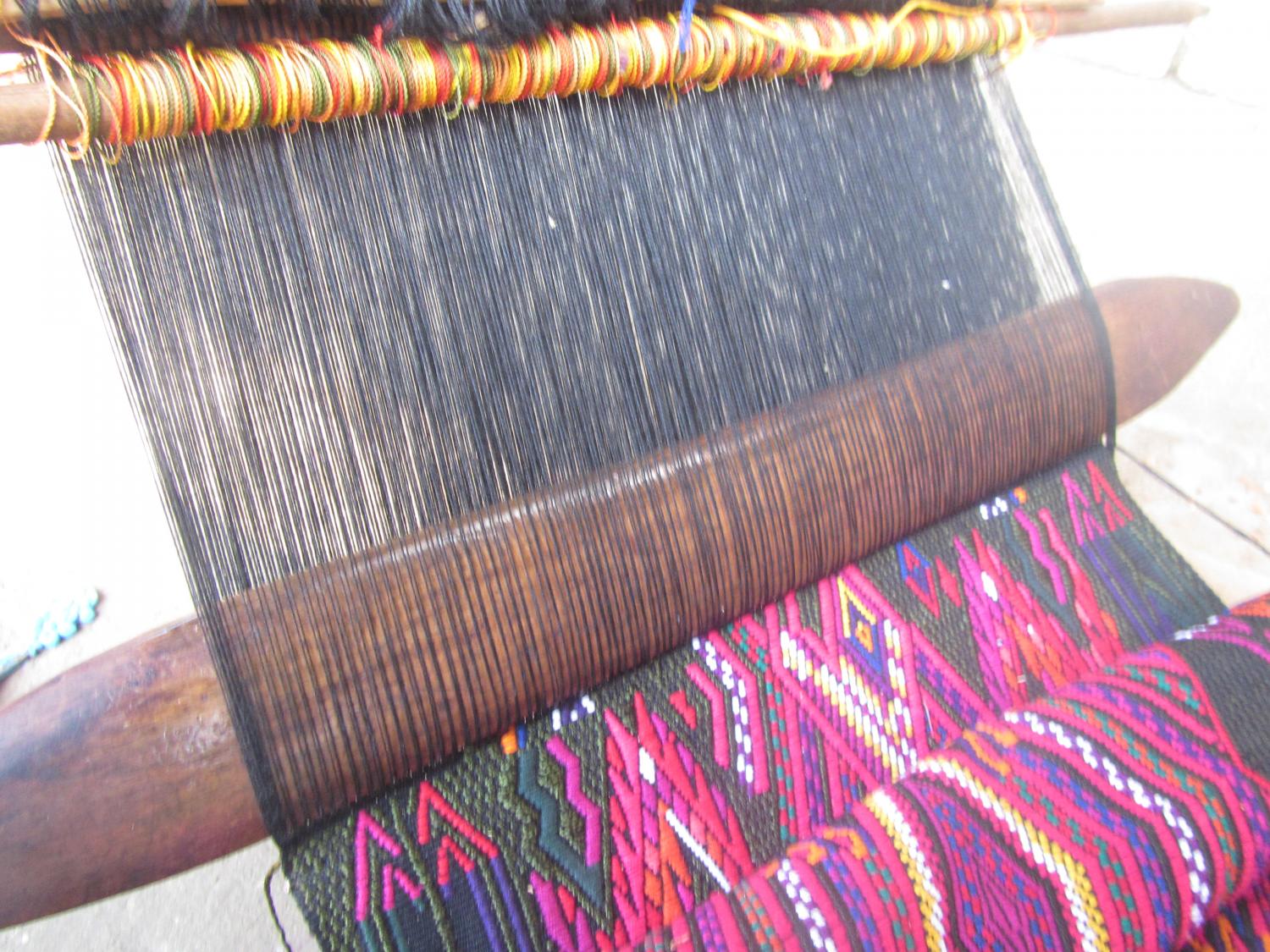 9 The finished fabric is thick and coarse to my thin-skinned bourgeoisie fingers. Much like the women of Guatemala, the weaving is built to endure the mad sun, and resist the stains from working the soil. A well-made huipil can last for over ten years of consistent use. 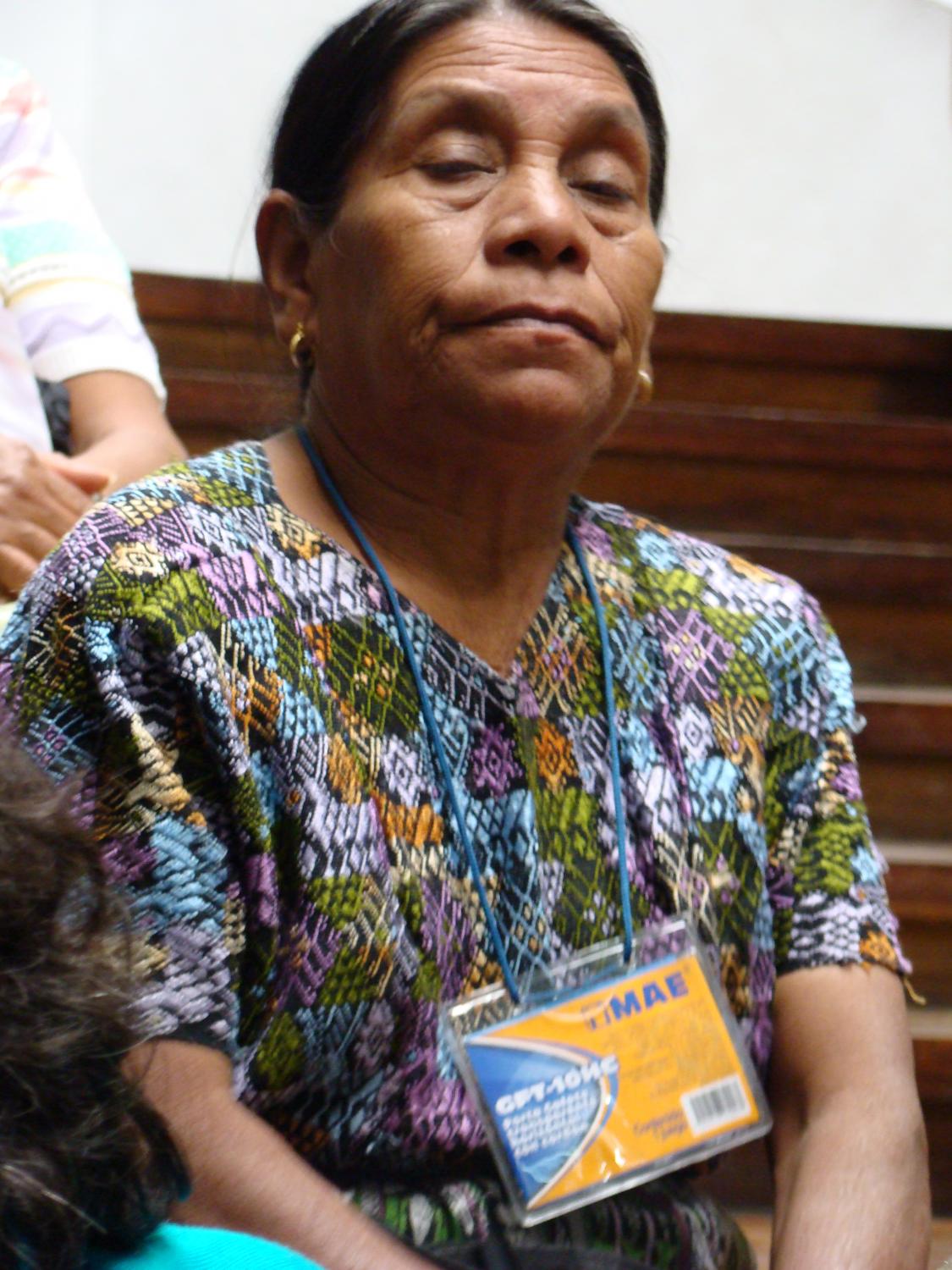 10 In an interview with this blog post's author, Rita, one of the genocide survivors recounted losing her house, possessions and clothes to arson. Rita was forced to hide in the forests of Quiche with her family, including her 8-month old child. Rita rebuilt her life by selling tortillas in the urban center of Guatemala City. Despite pressure to assimilate, Rita never from hid her cultural heritage and her voice is now being heard in the Supreme Court proceedings.
Share on: