This is a guest post by Kiva Fellow Esther Honig, who spent the last four months working with Kiva partner Fondo Esperanza in Chile.

In Santiago, Chile, a recent census showed that 50% of households living below the poverty line are run by single mothers.

The reason why has a lot to do with gender inequality in Chilean society. Of 93 countries surveyed around the world, Chile ranks 60th on the Gender Empowerment Measure (GEM).

While the country is considered to be fairly developed, many women still struggle to gain economic independence. The majority of single Chilean mothers never see a dime for child support and many moms, like the four Fondo Esperanza borrowers I interviewed, have had to work tirelessly to make sure their families not only get by, but get ahead too.

I’d like to introduce you to these four mothers -- amazing women who embody the spirit that Kiva loans are designed to nurture, and who will stop at nothing to make sure their children have access to opportunity.

“I could only be a wife and a mother,” explains Maria, a 35-year-old single mother and borrower of Kiva field partner Fondo Esperanza. 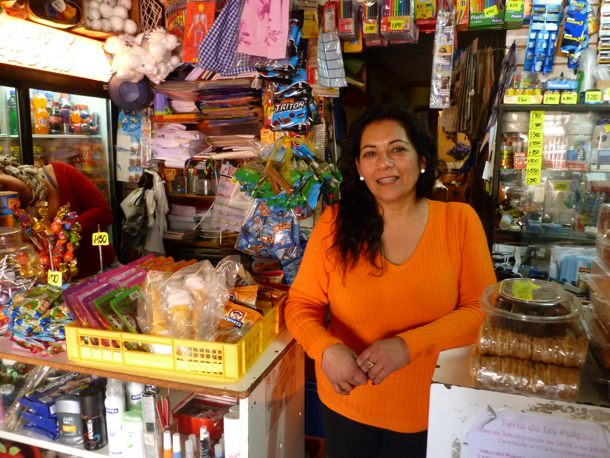 “This is very typical of Chile,” she says. “In Chile, men are very machismo but the women are also very machismo and we fall into their trap.”

Maria’s husband did not allow her to work and insisted she stay home to care for their kids. This is common for many women in Chile. In fact, women have rather low participation in the labor force. According to the World Bank, only 47% of working-age women hold formal employment.

Regardless, Maria’s entrepreneurial spirit persisted, and eventually she insisted on starting her own business. With just with just  80,000 pesos, or around US$170, Maria bought an assortment of everyday goods to start up a convenience store on her front porch.

Though small, that business has enabled Maria to make it as a single mother when one day, eight years ago, her husband left her.

“I was traumatized,” says Maria. “He left me with the bills for the house. At first he was helping me out a little and after a year he just forgot.”

For the past decade, Maria has continued to grow and invest in her business. Today, she is a borrower through Fondo Esperanza, and her success as an entrepreneur has not only supported the household, she is also financing university studies for all three of her kids.

“If you give your kids a house, it can burn down and you’re left with nothing,” she explains. “However, if you educate your kids that is something they will never lose.”

“When I first moved here, there was no kitchen,” explains Alejandra, pointing to her modest apartment that she received thanks to a government subsidy. “For the first few months, we could only eat fast food.” 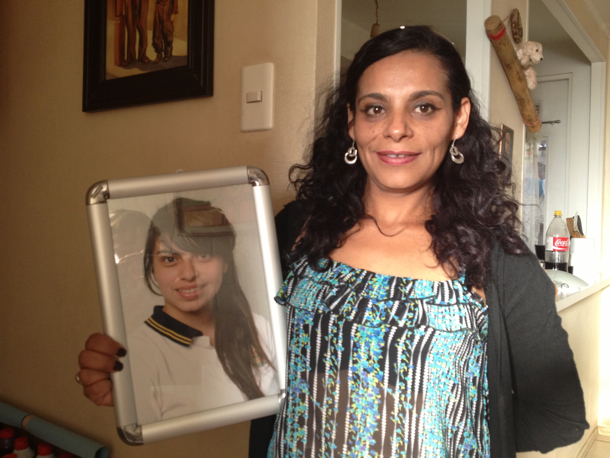 Alejandra with a photo of her daughter Nicole.

For the past seven years, Alejandra has been a single mother of three and says that making it on her own was not easy. Since her husband left her to care for their three kids, she has had to work nonstop. In addition to holding down part time work in cleaning and caretaking, Alejandra runs her microbusiness on the side, and has sold everything from fast food to underwear and cleaning products.

For many mothers, formal employment is simply not an option since it doesn’t allow them the flexibility to look after their kids too. For Alejandra, this was especially important. Her 18-year-old-daughter, Nicole, is deaf and at times requires extra assistance.

Alejandra explains that she often looks up to her daughter.

“Many things are not adapted to her special needs and so it has been a struggle, but she has always managed to get ahead,” she says. “She has a disability and I don’t, so if she can do it why can’t I?”

Alejandra is on her sixth loan with her communal bank at Fondo Esperanza and says the credit has allowed her to establish a business selling cleaning supplies from home. Each month, a part of what she earns goes towards constructing a small space on the side of her home where she plans to open up a store.

With this, Alejandra hopes that once Nicole has finished high school, she will also become a Fondo Esperanza borrower. Nicole takes seamstress courses, and Alejandra envisions that the two will work side by side -- Nicole at her sewing machine in the kitchen and Alejandra with her small shop next door.

“I married at 25, had three kids,” says Miriam. “I divorced four years later and from there I had to learn to make it on my own.” 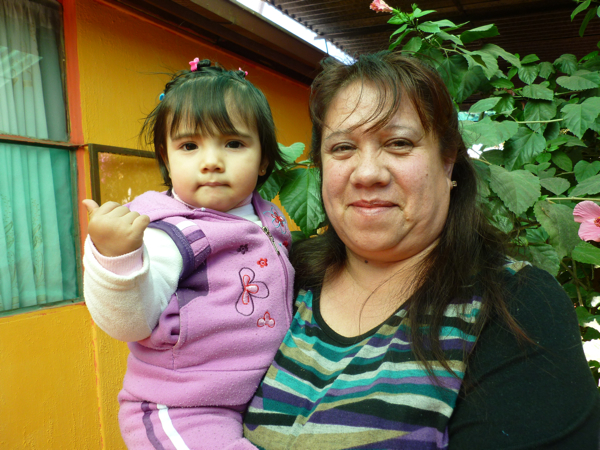 Mariam experienced an abusive relationship and separated from her husband even though it meant less financial security.

“In Chile, it’s difficult for women to become independent,” she explains. “It’s frightening and many women don’t have the confidence to say, ‘I can do this, I can provide for my family on my own.”

These days Miriam is 42 and a grandmother. She sells clothing and household appliances at the local market, uses her car to shuttle neighbors into town, and during holidays, she makes and sells traditional meals, empanadas and baked goods. “I’m like a little octopus,” remarks Miriam. “I do a little of everything.”

At 31, Miriam was diagnosed with cancer and was unable to work for the following four years. “It was a very poor life.” She recalls. “There were times when we had no electricity or water, sometimes we didn’t have food.”

Throughout it all, what keeps Miriam going is thinking about her kids,

“Everything I have accomplished is for them,” she says. “What gives me the greatest pride is that they’re good people, that they study. that they have careers. and that they never forgot that there were days we had one bread for the four of us.”

Four years ago, Miriam joined Fondo Esperanza and says many of the other borrowers are like her, single mothers learning to get by.

“Fondo Esperanza is educating us to think differently,” she says. “Not only do they lend us money so that we can have our own businesses, but they teach us to be independent, to believe in ourselves, and that as a woman, no one can think lesser of me.”

Estrella rests her chin in her hand as she talks to me -- it’s 5 p.m. and she has little energy.

“I live with just the necessary,” says Estrella. “All the money I make is so that my kids can study.” 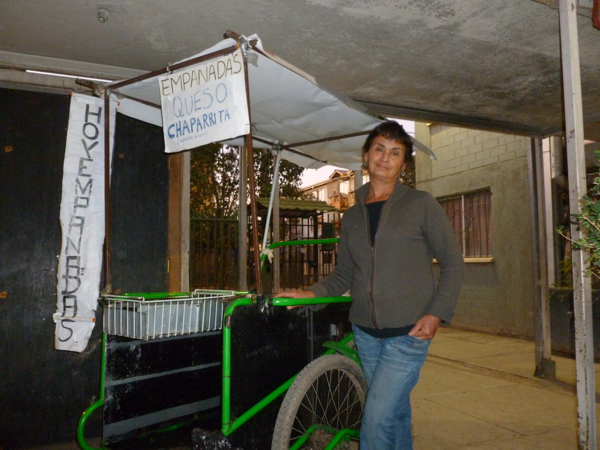 At just 20, Estrella became a single mother and today has three children. What makes Estrella’s situation especially difficult is that she has Lupus, a disease that affects the immune system.

Due to her health condition, Estrella has limited work options. Direct sunlight irritates her Lupus, and every six months, she travels to a hospital for treatments. On top of that, she has fibromyalgia, and says at times she is unable to work at all.

“Some days, I can’t get out of bed and my whole body aches,” she says. “It’s like a truck has run me over.”

This is why Estrella must work independently in order to support her family. Seven days a week, Estrella wakes at 6 a.m. to get her youngest son to school. From 9 a.m. until 3 p.m., she sells empanadas at the local market. In the evenings, she returns home, takes a nap, and wakes an hour later to make more empanadas for the following day, often baking until 1 a.m.

“I think about my kids,” says Estrella. “That’s what keeps me going. I want them to have careers and to be able to live comfortable lives.”

Estrella has pushed each of her kids to study. Her oldest son is a civil engineer and her daughter has just entered university. Though she received a generous scholarship, Estrella struggles to pay the remaining tuition of US$170 each month.

Thanks to her loans from Fondo Esperanza, she has been able afford more ingredients to make a larger batch of empanadas. This allows Estrella to work less and have more time to rest.

“[Fondo Esperanza] gives me hope,” she says. “I have the chance to receive another loan, and I can look ahead to think what I am going to do with my business.”

You can make a difference for a mother this Mother's Day. Consider giving a Kiva Card. When you do, your recipient can make a loan to a borrower of their choice and get repaid to do it again and again.

Have questions about Kiva Card? About Kiva's Field Partners? Send them our way at blog@kiva.org. 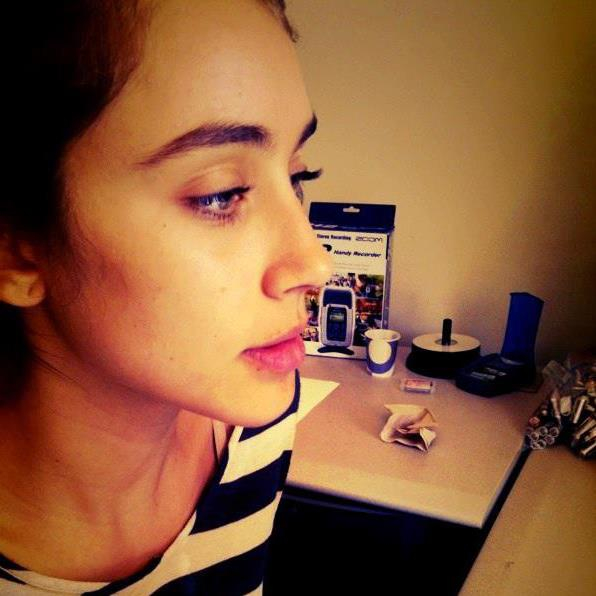 Esther Honig was born in San Francisco, but raised in Denver Colorado. In 2009 after graduating from high school, Esther lived in Mexico City where she studied Spanish, Latin American Literature and History at the National Autonomous University of Mexico. In 2010 Esther enrolled at Mills College where she was reintroduced to the vibrant culture of the San Francisco Bay Area. Esther considers herself a lifelong student of the arts and culture. Since the age of eight she has pursued dance, classical ballet and modern-contemporary, as both a passion and a creative outlet granting her insight and experience into the creative process. Esther has found her latest passion in radio journalism. In 2011-2012 she studied under KALW director Holly Kernan to produce two radio documentary pieces, both of which have aired on KALW. In May 2012 she graduated with honors from Mills College with a degree in Spanish, Spanish-American Studies. Honig applies he knack for language in the area of literary translations where she works with poetry and novels that have never before been translated. In the future Esther hopes to pursue opportunities in journalism and translations.