After several weeks of extensive user testing, we’re excited to release a new site update for the lending team "About" pages next week. This is all part of a concerted effort to better integrate lender feedback into our design process, and I’m personally excited about how much we’ve been able to do with this next round of changes. In addition to your emails and comments on the blog and lending teams, we sent out multiple surveys, interviewed a number of lenders and even had lenders visit our office so that we could learn directly from their experiences. I know the whole Kiva team would agree that it’s been such an insightful process.
One example of our learnings was the discovery that there were several features our community wanted that weren’t part of our original design: what individual loans are being used for, how many team members are supporting each loan and whether or not they’re set to expire in the next 48 hours.
Similarly, there are parts of the current design that weren't a priority for a majority of teams. Most people weren’t interested in seeing their own team description, so we de-emphasized its placement if you’re already a member (but if you haven’t yet joined a team, the description is still front and center). The team stats and rankings were also less important to team members than the Latest Activity, so we relocated those to a secondary position in the sidebar. (Click on the thumbnails below to enlarge.) 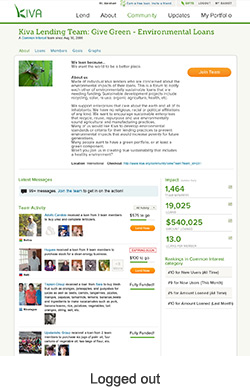 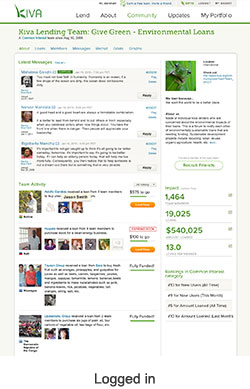 The primary goal with these changes is to better highlight team activity, improve the connection between lenders and borrowers and make it easier for team members to see what their fellow members are up to. Here’s a summary of the biggest changes coming with next week's update:

With these changes scheduled for next week, I wanted to say thanks again to our community for their helpful perspective throughout the design process. We’re looking forward to hearing what you think about these latest updates!

Have questions? Comments? Send them our way at blog@kiva.org.

Brandon is from North Carolina, where he studied journalism at UNC Chapel Hill. After interning at Kiva in 2012, he joined the staff full time in 2013 to serve as the Community Marketing Coordinator, Kiva's liaison with the 25,000 lending team communities. In his spare time, Brandon enjoys medium-format photography, biking around the bay, and keeping in touch with friends and family on the east coast.