Many of the Micro-Finance Institutions (MFIs) that Kiva partners with include poverty alleviation in their mission statements. To fulfill this mission, many MFIs realize that administering micro-loans needs to be combined with other supplemental support activities to be able to sustainably bring people out of poverty. Some services that MFIs offer can range from financial management courses, community development projects, business planning for new entrepreneurs, health insurance packages for entire families, just to name a few. They understand that the roots of poverty are much more than just not having access to financial resources.

When I started as a Kiva Fellow, I was primarily focused on the process and administration of micro-finance and overlooked some of the most exciting aspects of the work. I have been with the MFI Fundacion Alternativa in Quito, Ecuador for about four weeks and have visited dozens of clients who have solicited small loans as new entrepreneurs or to strengthen their existing small businesses. One afternoon after completing follow-up visits to new clients in the field, my counterpart at Fundacion Alternativa asked me if I wanted to see one of their social projects. I was intrigued because I had been so focused on borrower verifications and other business components of micro-finance that I hadn’t realized they also managed several social projects. I said, “Yes, of course”.  While in route to visit the project I was starting to have doubts about my decision to go along. I did not realize that a “short drive” would turn into driving several hours into the countryside on very curvy mountain roads to check out some pigpens and waste treatment. After we started on the road trip, I knew that I would not get home until very late and I was already tired from being picked up at 6:30am and fighting a cold.  I was wondering what exactly I was getting myself into. That is the life of a Kiva Fellow!

In the end, I am glad I said “yes” to visiting the project. It was definitely worth it. The countryside was stunningly beautiful and the project that we checked on was innovative, interesting, and practical at the same time. We finally arrived at a small town called Pueblo de Cahuasquí, which is known as the “Island in the Sky” because it is located on a beautiful, scenic plateau in the mountains.  The principal economic activity of the town is farming. 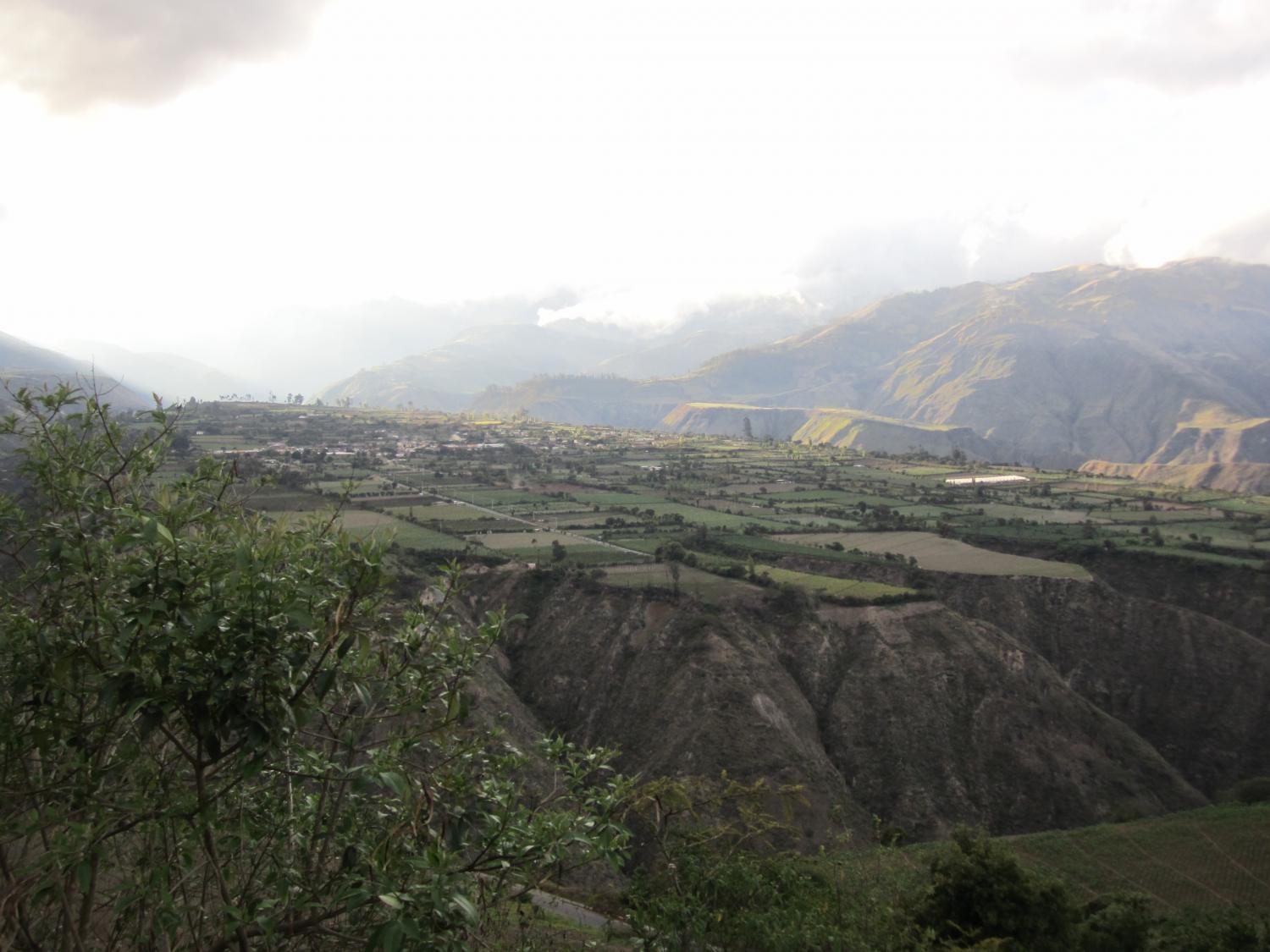 Fundacion Alternativa received a grant from a Belgium non-profit to implement a biodigester, or waste treatment, program. The idea is to build pigpens to capture the waste from the animals that is then stored in large, compressed plastic barrels. From the pressurized waste in the barrels, clients can capture gas to cook with and heat water, another type of gas to organically fumigate their crops, and at the same time collect natural manure for fertilizer. 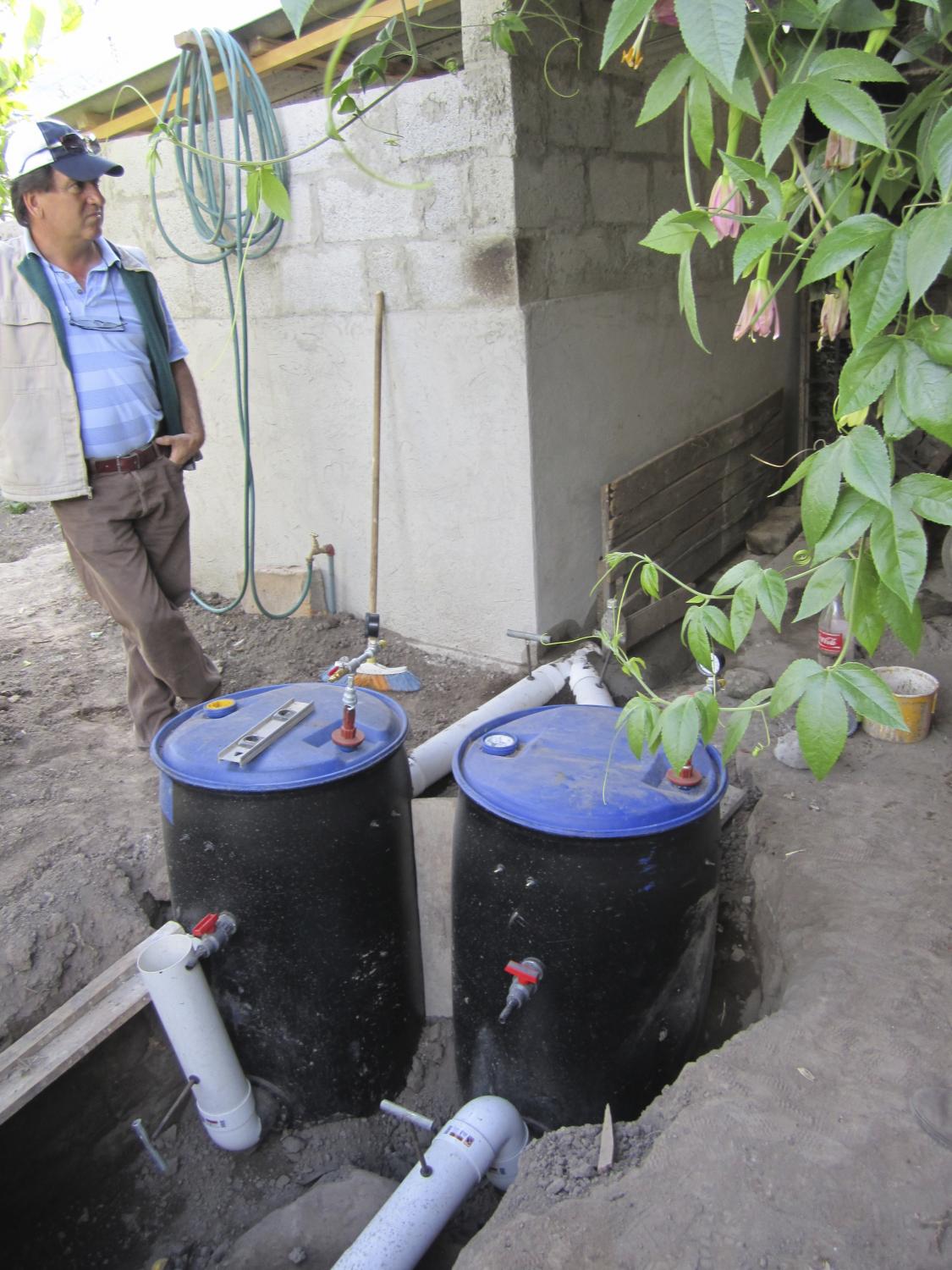 Implemented Biodigesters attached by pipes to the back of the pigpen. The top valve is to capture gas for cooking, the middle one is gas for fumigating crops, and the bottom pipe is to collect natural fertilizer. 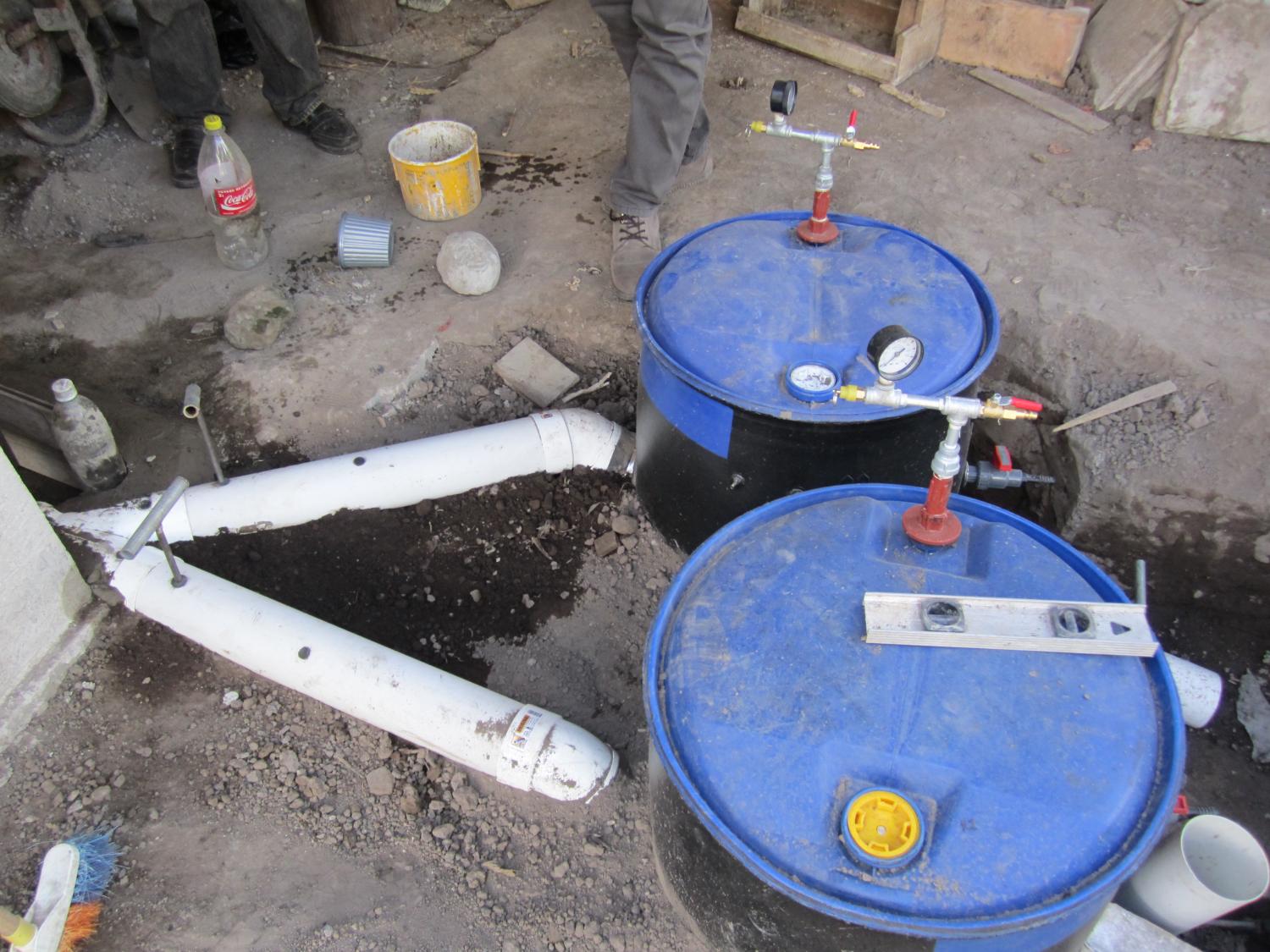 Two biodigester barrels are used for the project so that while one is filled to capacity for the gases and fertilizer to be used, the other one can continue to collect the waste. It is an easy process to switch from one barrel to the other.

Also, once the pigs are fully grown, clients can sell them for a profit for additional income. I was so impressed with the innovative and productive use of the pigs and biodigesters and absolutely amazing results with relatively simple technology! It is a project that triples the benefits of a traditional income generation investment of raising pigs.  I was fascinated by all the positive advantages of pigs and biodigesters, and mostly that a MFI was taking the lead on implementing such a project. It makes sense though; many of their clients take out small loans to purchase pigs in the hopes to raise and fatten them up in order to sell them for big profits at market, why not try to add extra value to raising the pigs. 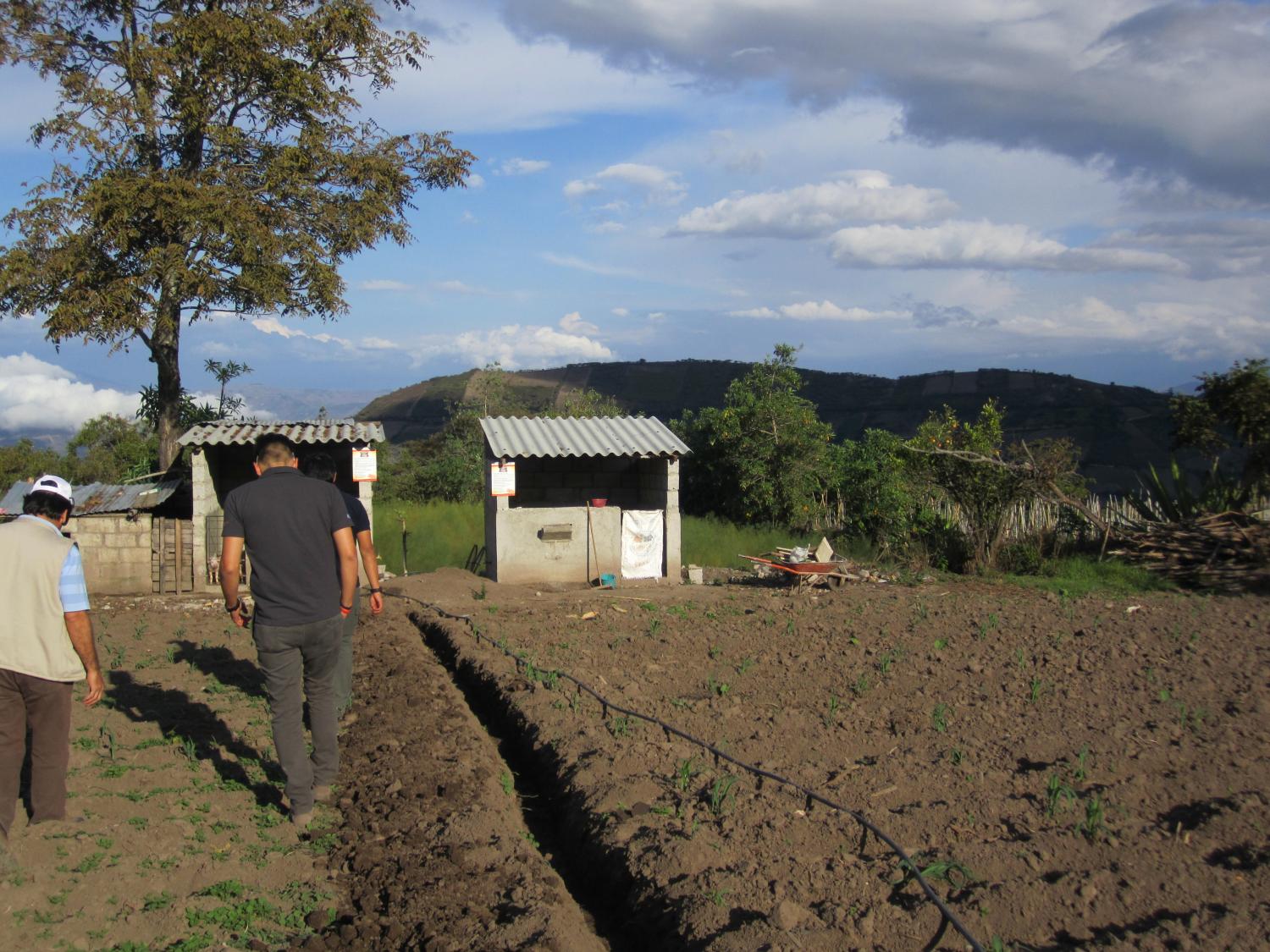 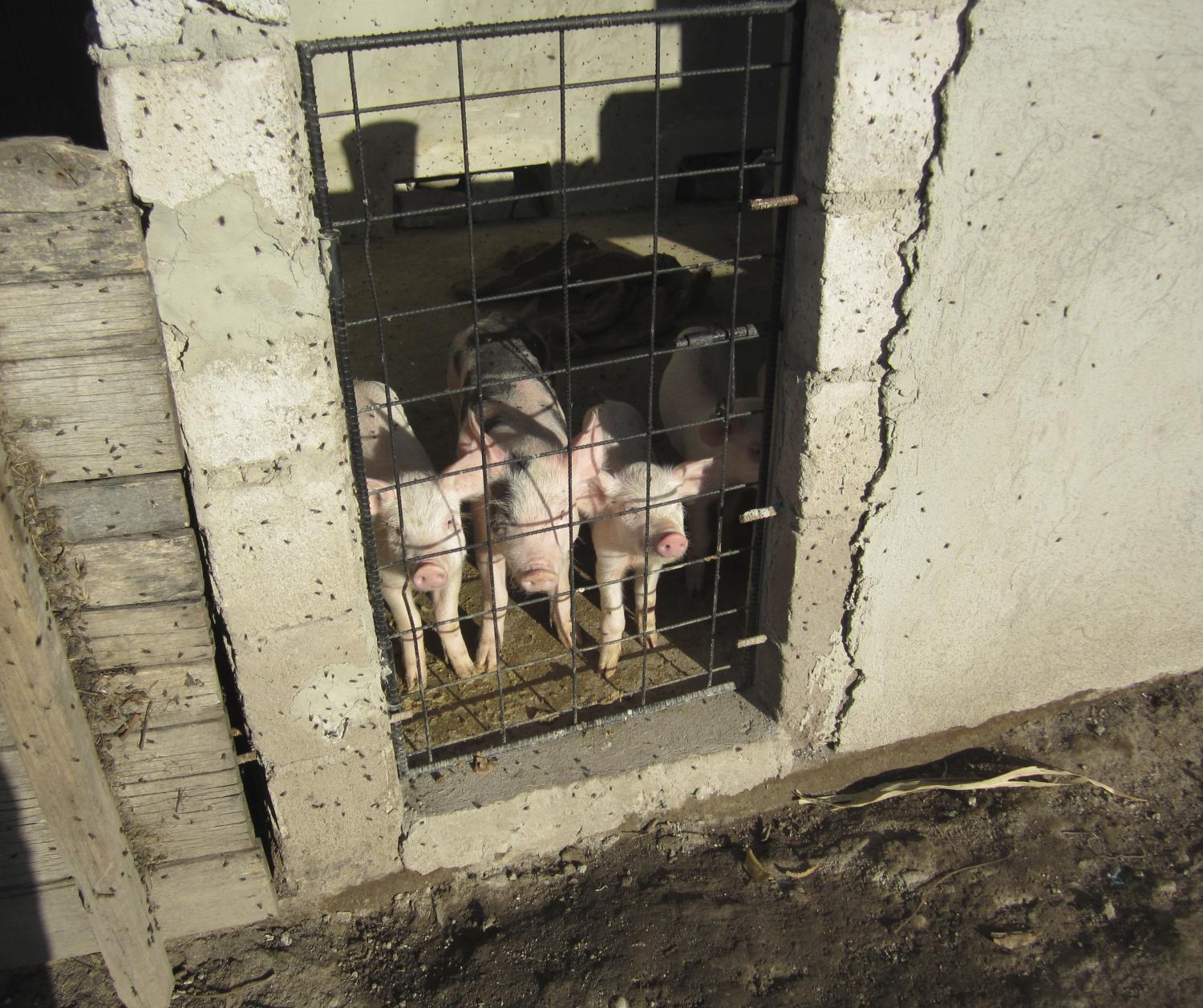 Four newly purchased piglets in their pigpen for the Biodigester project 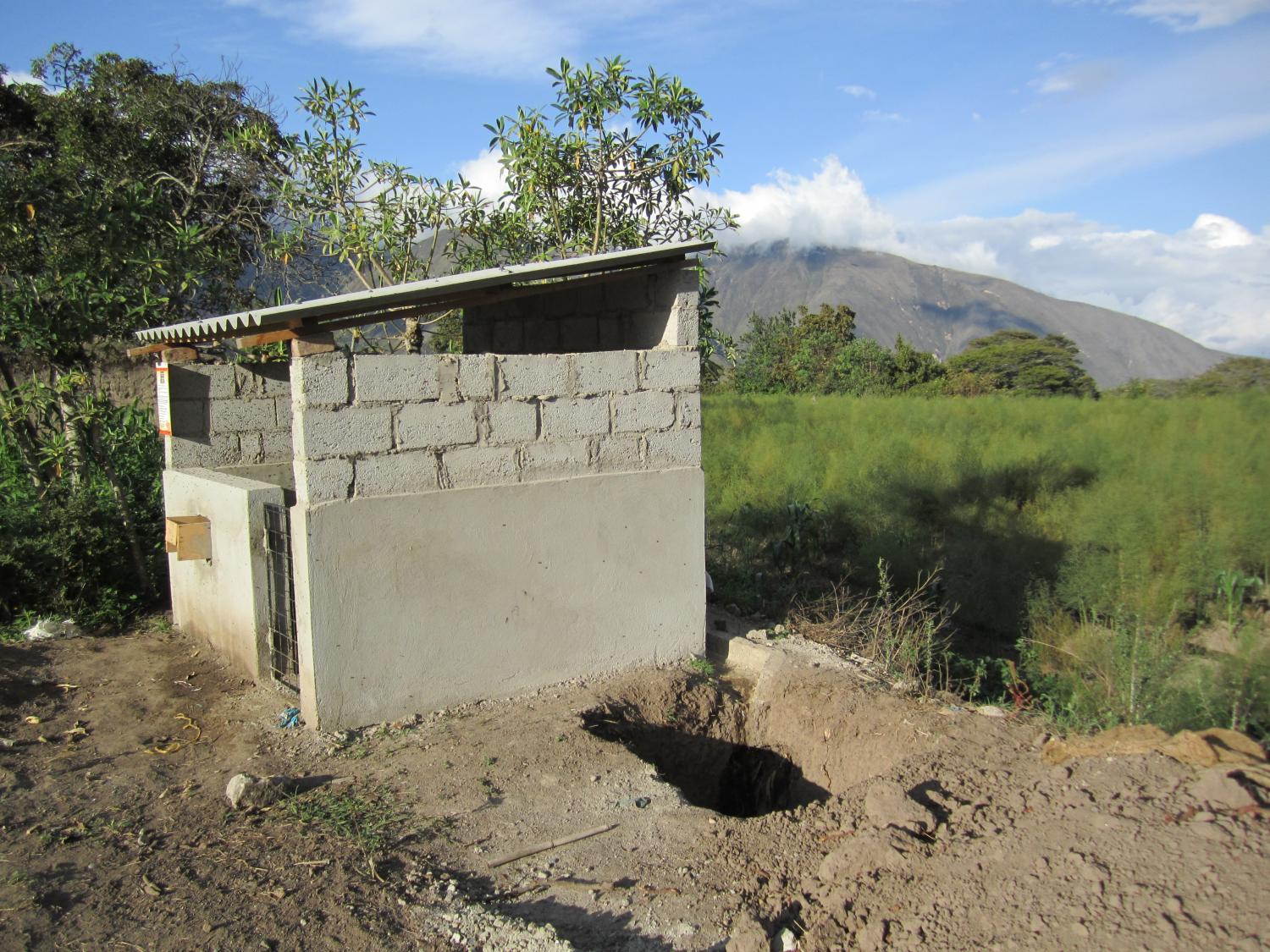 Beginning phases, a newly built pigpen and space for the Biodigester barrels

This Fundacion Alternativa project supports interested clients by providing the materials to build the pigpens and biodigesters, as well as supplying the piglets. The clients only need to supply land and the labor to build the pigpens. The foundation has hired a very knowledgeable engineer plus an experienced veterinarian with a background in pharmaceuticals to oversee the implementation of the project. As with all new projects, there are some hurdles to overcome. One challenge was that when the piglets were first bought they proved to be too small and were not producing enough waste to fill up the biodigesters as fast as planned, but in a couple of months they should have no problem filling up the barrels. Another challenge is that people who live in town have access to potable water but those that live in the outskirts do not have enough water for the pigs, and the little they do have is used for human consumption. Due to insufficient clean water the pigs were getting sick, which is not good for them or the biodigester. The team is currently working on a safe and cheap way to disinfect the drinking water for the pigs. After working out the initial glitches, Fundacion Alternativa hopes to build around 80 of these prototypes. Word is spreading on the projects in Cahuasquí and more townspeople are coming forward asking to participate.

Being able to see this amazing multi-faceted project and dedication to improvement first-hand, I strongly feel that this is something that could be supported by Kiva. Hopefully in the next couple of months, lenders will be able to loan their money to help fund this impressive biodigester project that not only is environmentally friendly, but also provides many economic benefits to clients in farming communities! 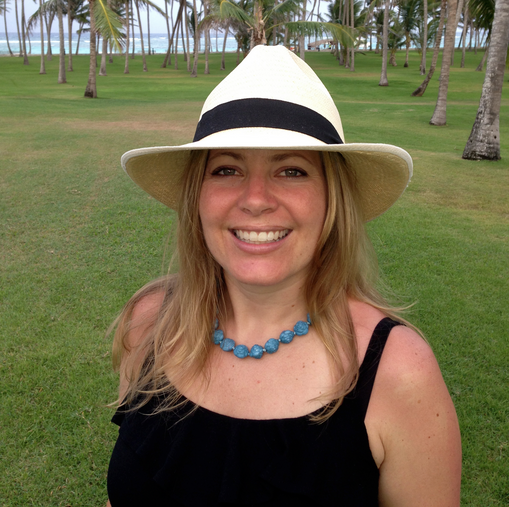 Growing up in a small town in East Tennessee, Kacki was drawn to people with different backgrounds and wanted to explore the world. She studied Intercultural Studies for Business at Wofford College in South Carolina. During this time she studied abroad in Spain, Cuba, and Brazil. After graduating, Kacki headed to Costa Rica for an internship and also spent time volunteering on an eco-farm in a rural town. She returned to Atlanta, Georgia where she gained a strong foundation in business skills working for BB&T Bank and Northwestern Benefits Corporation. Missing the excitement of Latin America, Kacki moved to Santiago, Chile where she became TEFL-certified and an English Instructor working with high-level executives on improving their English. Loving the field of education, she returned to the United States for graduate school at the School for International Training (SIT) in Vermont where she received her Master’s in International Education. This led her to work in Mexico and Belize for four years with ProWorld Service Corps, a small international sustainable development organization. She was promoted to Country Director and managed the site in Oaxaca, Mexico. Following her time in Mexico she went to Washington D.C. to work for Georgetown University in the Office of International Programs. After three years, she is ready to get back to living life in Latin America and help create positive change!