Standing at a whopping 6 feet 2 inches tall, with kind eyes and a warm, toothy grin, Yessaya Lyimo is quite the presence in any room. He is the first person I met in Tanzania, and has probably been the most influential in making my time here a safe, engaging, and enjoyable one. 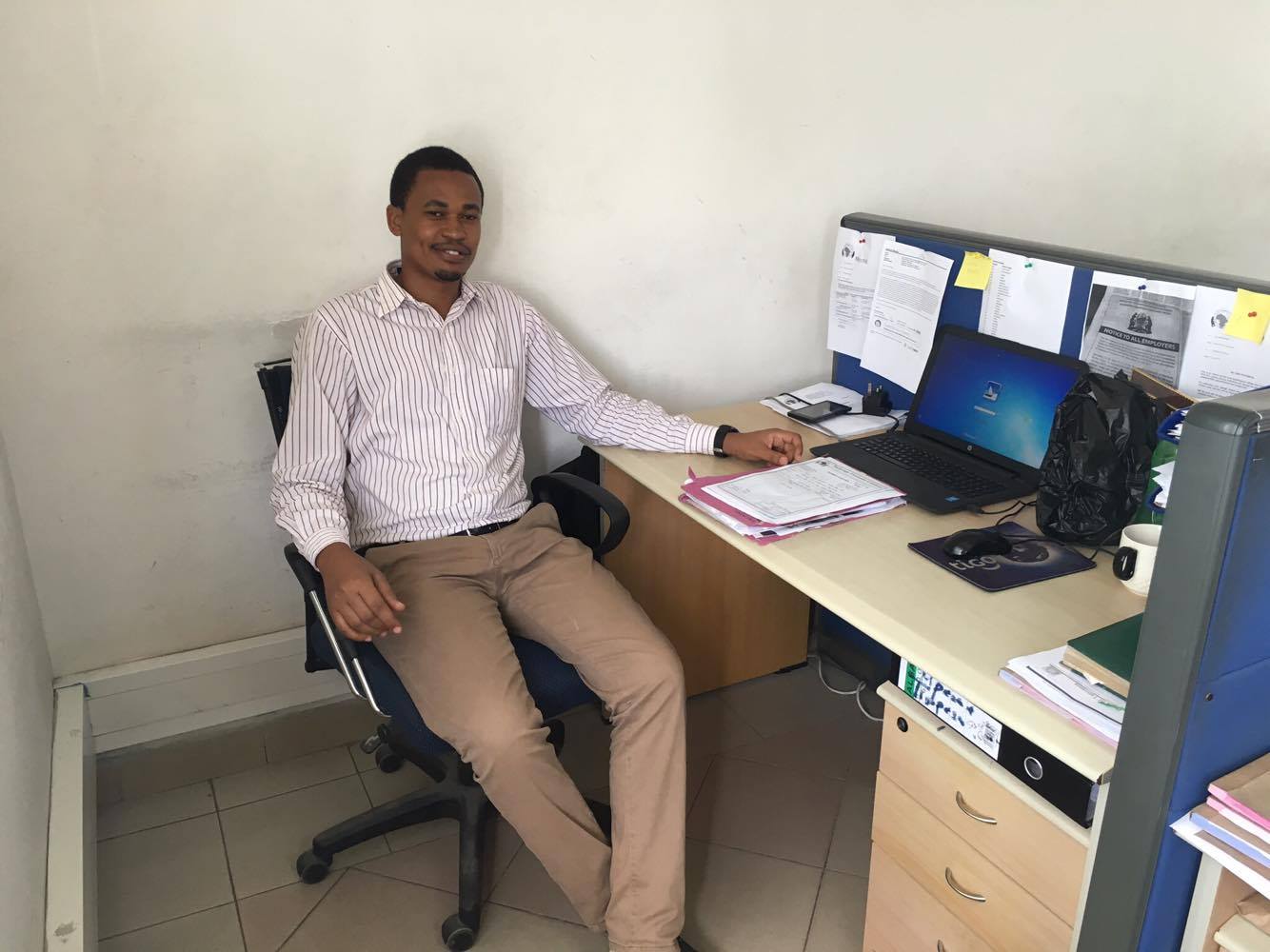 Yessaya at this desk in the office

Since the moment he spotted me (not a difficult task, but hey) in the steamy arrivals hall of the Dar International Airport, Yessaya has taken me under his wing, and treated me like a child of his own. I would be lying if I said that I wasn’t nervous to come here. Moving alone to a bustling African city was never something I imagined myself doing, nor was it on my bucket list, to be honest! My nervousness was apparent, but Yessaya understood the reasons for my trepidation, and responded by doing everything he could to make me feel safe and at ease.

In addition to being a kind and compassionate person, Yessaya is an incredibly hard worker, and an integral part of the team at Tujijenge. Yessaya has been working for Tujijenge Tanzania for seven years now, and up until recently he has been the Kiva Coordinator, taking in and caring for all of Tujijenge’s Kiva fellows like myself.

He handles a massive work load, often arriving at the office at 7am and not leaving until after 8 at night. At Tujijenge, he manages the finances for all of the Kiva loans, conducting all of the repayment reports each month and keeps track of the inflow and outflow of Kiva funds. While he is no longer officially the Kiva Coordinator, Yessaya has taken care of me like it was his day job, ensuring I get to and from work safely each day, suggesting fun things to do in Dar on my weekends, and even bringing me Tanzanian treats to sample from the local food vendors. His long days are augmented further due to his lengthy daily commute, which involves taking two dala dalas and a ferry, and often takes over an hour each way. Every day he does the job of several individuals, and does it all with a smile on his face.

Yessaya draws inspiration for his job from his strong desire to help individuals in need. He strongly believes in Kiva’s mission and feels that through his work at Tujijenge, he is truly able to positively impact the lives of others. It is that knowledge that keeps him going on a daily basis.

I had the opportunity to bond with Yessaya outside of our regular office interactions, when he invited me to his family’s house for dinner a few weeks ago.  I knew that he lived quite far from the office and from where I am staying, but I didn’t quite realize the extent of his daily safari (journey).

The journey out to his abode was an experience in itself. Not wanting me to attempt the journey on my own, Yessaya picked me up near my house, only to take me all the way back. We took a bus to Dar’s main port, where we passed through the nation’s largest fish market in order to get to the ferry. The wait for the ferry was longer than usual, as one of the two vessels that usually oscillate between the two shores was getting repairs. Apparently a month prior, a minor leak turned into a gushing jacuzzi jet sending several passengers on an unexpected swim! (Greaaaat.)

The need for a ferry to connect these two parts of the city seems a bit unnecessary, as the other side must be no more than 100 meters away. As we sit there, waiting for our trusty vessel to arrive to escort us safely, I can see men across the channel cooking, chatting, fishing. We are so close I can smell the fish frying on the other side! Yet the only bridge is quite a distance away, putting all citizens needing to travel to this part of the city at the mercy of this sole, leaky ship.

The ship finally arrives (where it was I have no idea...Cape Town? Iceland?!) and the masses move. People come from out of the woodwork. It felt like the great wildebeest migration as people, goats, cars, chickens, bicycles, tuk-tuks, random stray children, and giant buckets of live fish, shoved, squeezed and used brute force to get their carcasses on board, except instead of watching it safely from the inside of a Range Rover I was pressed between an exhaust pipe and a herd of geese. I was undoubtedly the only mzungu in sight, and it made for a thrilling, unforgettable experience.

When we finally got to the other side, we walked through town, then took a bajaj to take us the final stretch to Yessaya’s place. I was greeted by his lovely wife, Veronica, who instantly placed their four-month old baby into my arms. I spent the rest of the afternoon holding baby Cleva in my arms, toting him around Yessaya’s village, meeting the neighbors and friendly passersby. We stared at the trees, the chickens, and the neighborhood children whom baby Cleva would one day grow to play with. Veronica, or Mama Cleva, as Yessaya calls her, prepared a lovely meal of ugali, stewed kuku (chicken) and a spinach-like vegetable. In that moment, as we shared a meal in the dark (the power had been out all day) all the travel was worth it. 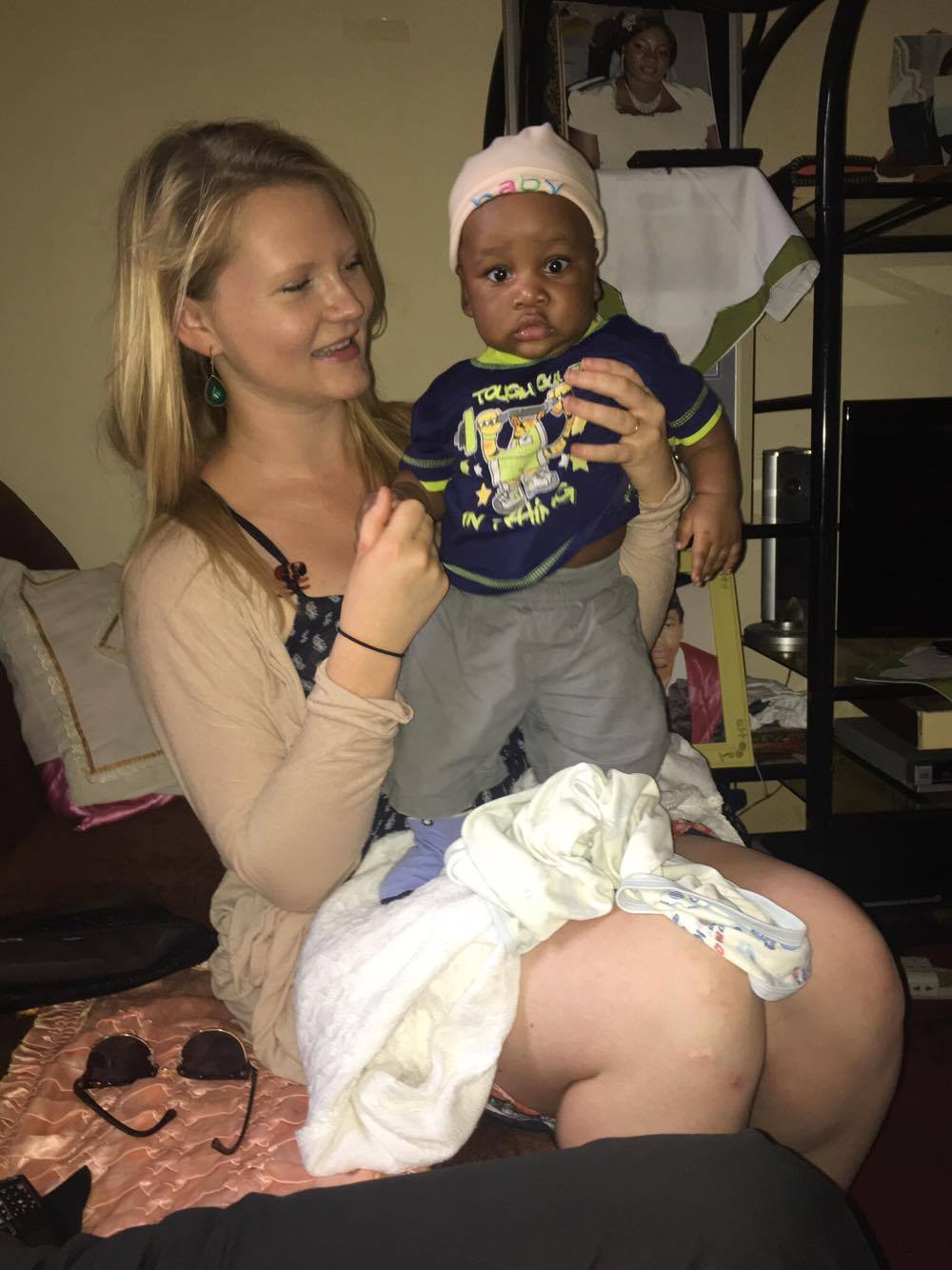 Me and Baby Cleva

After our dinner and some more time cuddling with baby Cleva, I thanked Mama Cleva and Yessaya graciously for their hospitality, and Yessaya and I began the long journey home. He was originally going to take me only half way back, but as my trusted bajaj driver was unavailable to take me from there, Yessaya insisted on escorting me all the way back to my house. Are you sure?? I exclaimed. This would mean it would be nearly 3 hours until he is back at his house again, having done his daily commute two times – on his weekend! Of course, he replied. Baby Cleva would not be happy if I didn’t ensure you get home safely. This is a testament to not only Yessaya’s kindness, but also to the kindness of the Tanzanian people. Since I arrived on the continent, I have been welcomed so graciously by everyone I have met. Tanzanians are very proud of their beautiful country, and are so happy to share it with new people. 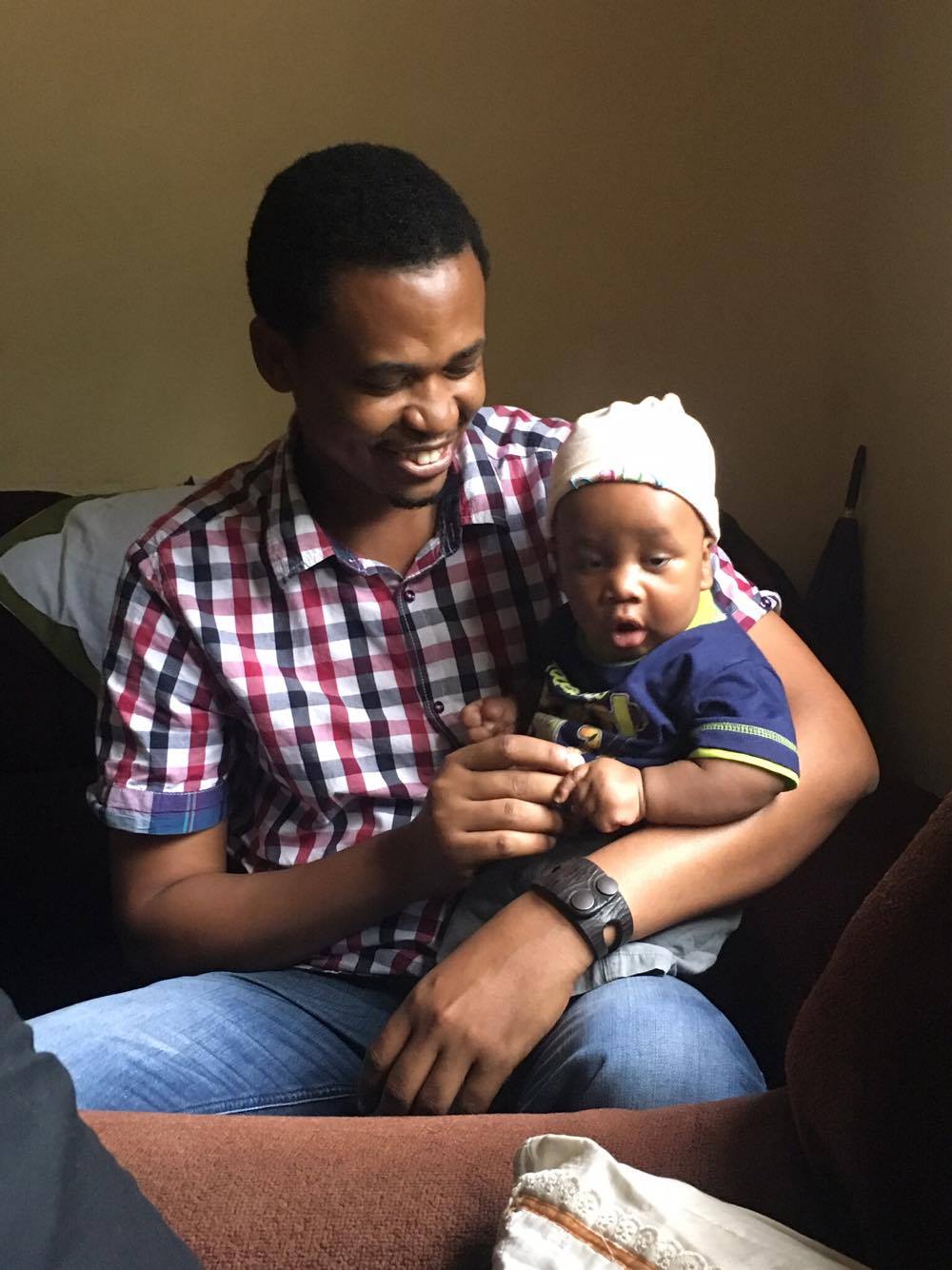 Yessaya and his baby boy

Yessaya is an integral piece of the machine that keeps Tujijenge, and Tujijenge’s relationship with Kiva, running smoothly. He was the first person to say karibu Tanzania  (welcome to Tanzania) to me, and I know he will be one of my toughest kwaheris (goodbyes). 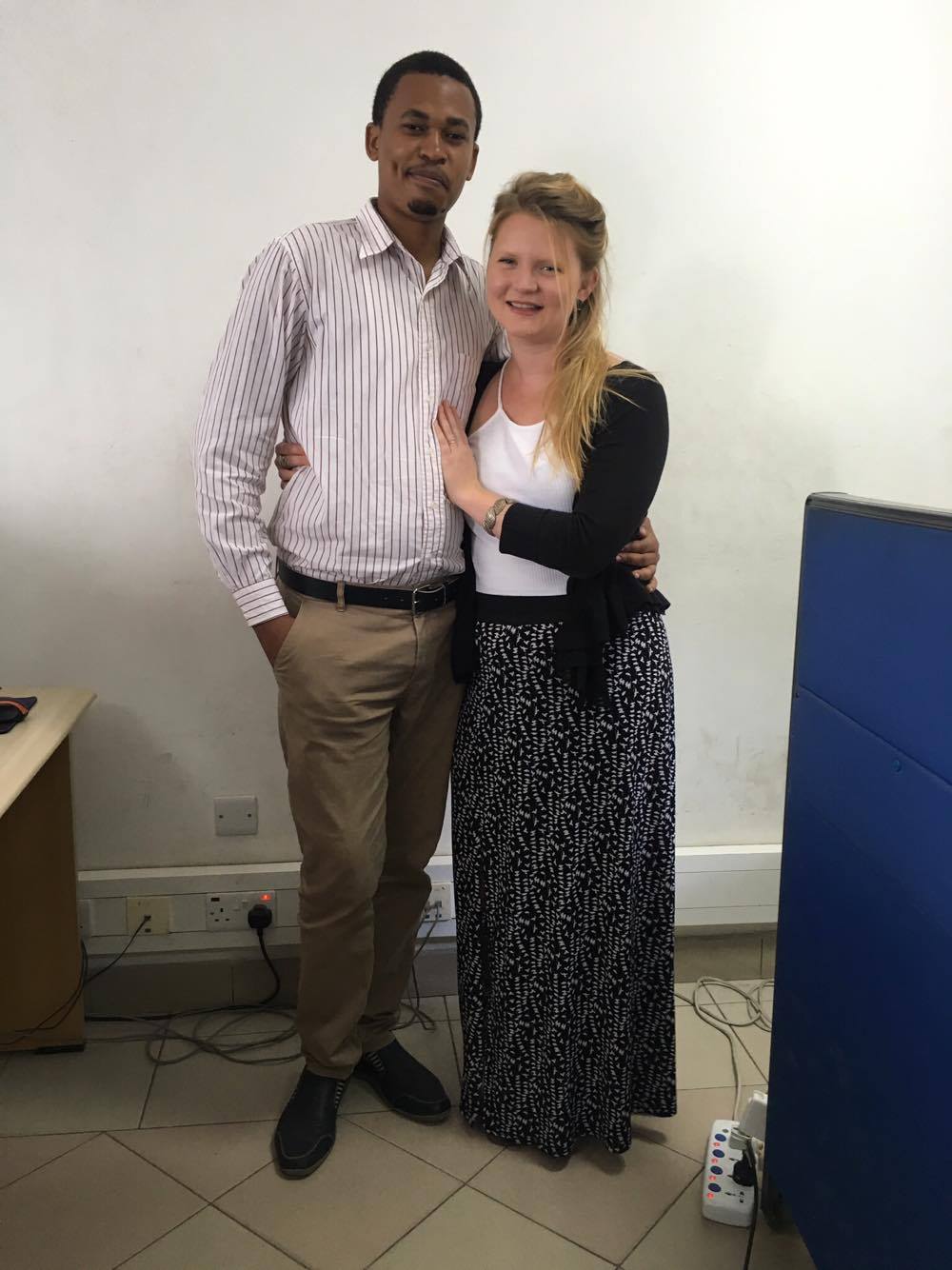 Will be sad to say goodbye! 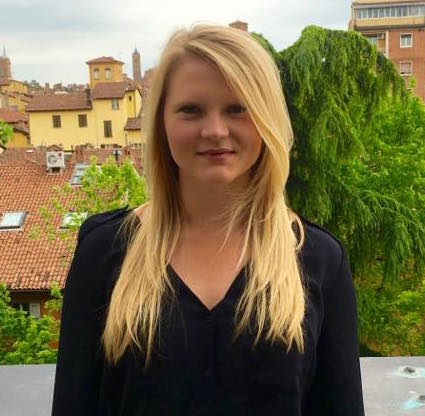 Irish-Canadian but raised in Los Angeles, California, Katie is an outgoing and enthusiastic graduate student who is excited to spend the summer working as a Kiva Fellow in Tanzania. She currently resides in Bologna, Italy, where she is pursuing a Master of Arts in International Economics and Law at the Johns Hopkins School of Advanced International Studies (SAIS). Prior to graduate school, Katie spent time interning with an NGO in Hanoi, Vietnam that provides rehabilitation services to victims of human trafficking. Katie has also spent time in Washington D.C. working as a legislative assistant to a Member of Congress. In her senior year of university, Katie lobbied her campus administration to divest from companies that use conflict minerals that come from certain noxious mines in the Democratic Republic of Congo, which initiated institutional reform throughout the entire California State University system. She is passionate about upholding universal human rights and plans to pursue a career in the field of human rights advocacy and protection. In her spare time, Katie enjoys hiking with her dogs, hosting dinner parties, and salsa dancing. Once she returns from Tanzania she will continue her final year of studies at SAIS in Washington D.C.