Danni cooking and preparing for her day's work

After venturing through hours of the greenest landscape over several hills, we finally made it to Borbon, a small city in Northern Ecuador.  Our mission was to find Danni - a Kiva borrower.  However, it wasn't as simple as one may think.  First, we had to climb down a hill into an area of several homes.  The loan officers forgot which direction her house was, so we asked a group of women where Danni was.  After several wrong turns, we were at last in the home of Danni.

When we walked in, we were greeted with a huge smile, along with the smell of heaven.  This was the smell of Danni's cooking as she was preparing for her day's work selling food on the streets.  Every day, she begins to cook in the early morning.  By 3pm, she is ready to take all of her home-made food, moveable stove, chairs and other supplies up to the main street to sell.  She has to carry each of these items up and down the steep hill every day.

We conversed for about half an hour and she introduced me to her 2 children.  I found her to be an extremely passionate and hardworking woman.  After getting to know one another better, she finally gave me a sneak peek taste of her special sauce.  It was a flavor I had never tasted before - pure deliciousness to say the least.  I couldn't leave her home without knowing the special ingredients.  She eagerly gathered all of her ingredients and had me smell each one individually - lemon, oregano, chili sauce, garlic, celery, parsley, and 2 special herbs called chigarran and chiangua.  After the sauce is made, she sprinkles salt and then pours it on fried fish, shrimp, chicken, as well as other foods.  I thanked her tremendously for sharing her secret recipe with me. 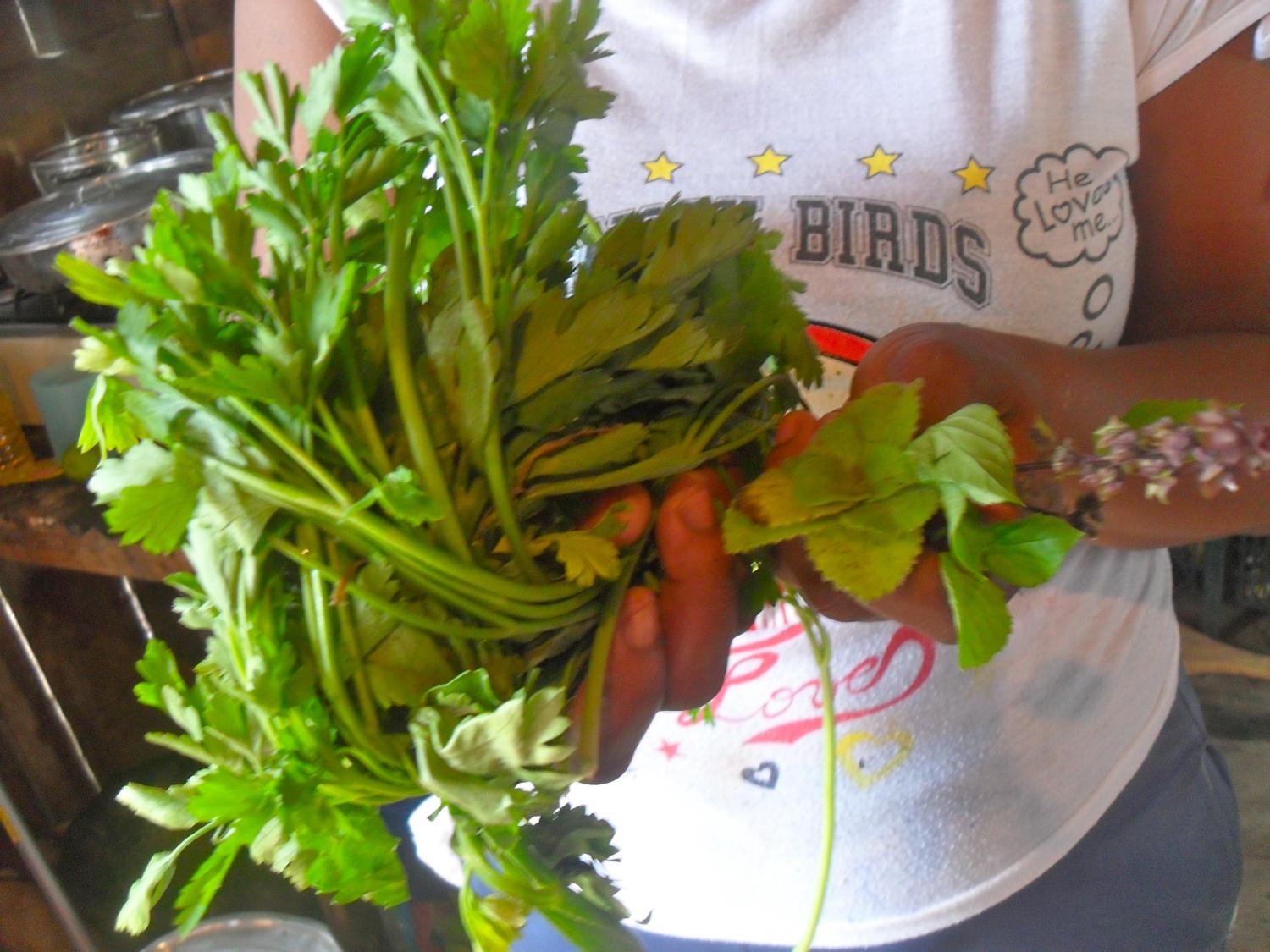 Danni's Secret Ingredients!
I asked Danni her dreams for the future.  Not only would she like to own a bigger home to have more space for her children, but she would also like to have a roof for her business for when it rains, more chairs, and more gasoline for her stove.  I told her that all of this is feasible and I have no doubt that she will accomplish this and much more!

When I gave her the printout of her Kiva profile and showed her all of the people who invested in her, she immediately smiled.  She said that she was going to frame it and hang it right next to her other framed portaits.  I then asked her what she would like to say to all of her lenders, and she responded, "Thank you very much for your support and trust in me.  I hope that you are proud of the work that I am doing.  I only ask you to please don't close the door on me so that I can continue to move forward and offer my children a better future."  It was in that moment that I truly realized the importance of what Kiva is doing - giving people like Danni an opportunity that they wouldn't otherwise have.

Not only did Danni reveal her secret recipe to her food with me, but more importantly, she also shared with me her recipe to her own success created by both her passion to succeed coupled with a helping hand from Kiva lenders.

Born and raised in New Jersey to immigrant parents from the Philippines, Cassandra grew up as a first generation American with the mentality that each person should have an opportunity to improve his or her life. Cassandra's desire for experiencing different cultures was sparked during a semester abroad in Spain. Since then, she has traveled to more than 20 countries and has no intent to stop. She received her BA in Accounting with minors in Spanish and Business Information Systems from Lehigh University. After graduation, she moved to New York City where she began her career in KPMG's Audit Financial Services practice. After an arduous first year, she decided to spend three weeks volunteering at a childcare facility in South Africa serving impoverished children, many of whom lost their parents to HIV/AIDS and violence. This experience propelled her to give back in her local community. She is a “Big Sister” to a child from the Dominican Republic and serves on a Manhattan high school advisory board that aims to help its immigrant student base realize their fullest potential and gain access to higher education. The combination of these life experiences sparked Cassandra’s interest in microfinance and international development. She strongly believes that access to basic financial services can transform the lives of individuals, as well as have a positive impact on the broader community. Cassandra is eager to apply the skills she has learned, along with her intense passion to help others while she works at microfinance institutions in both Ecuador and Peru.