Kiva Farmers: A Tale of Irony and Woe in Nicaragua 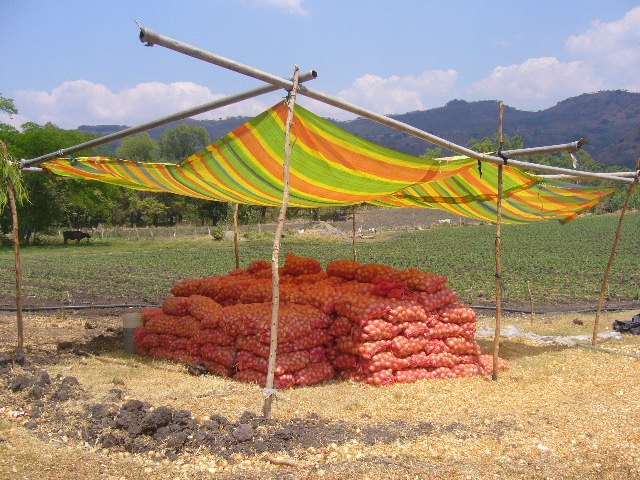 It has been a phenomenal summer harvest here in Estelí, Nicaragua. Everywhere you look; there are fields filled with onions, sweet peppers, tomatoes, and cabbage, thanks to just the right amount of rainfall and sunshine, and access to financing through micro-credit.  With loans from Kiva,  borrowers bought plants, fertilizer, pesticide, gasoline for irrigation pumps, and also paid the salaries of workers, and rent for the land and use of a tractor.

So why then, are all the farmers struggling to make their loan payments? Why is a Kiva borrower delinquent 40 days in paying back his loan?

We have to go back to the last three years, before 2010. Harvests were not good.  There was too much rain during the summer (Oct – April) which brought pests and rot. The farmers lost part of their crops, and couldn’t meet the demand in the market. Consequentially, prices for their produce shot up, and then did very well.

Then in 2010, the farmers, expecting the same conditions, all sowed their crops in October. However, this year, conditions were perfect. Come March, harvests exceeded expectations, and all the produce came to market at the same time, driving down the price. So instead of $6 for a box of tomatoes, the farmers were receiving $1.50. Now many farmers are forced to rely on an intermediary to broker a deal for their crop. The intermediary takes only three cents on the dollar for selling their harvest, but he is selling it at a cut-rate price, leaving the farmers with little to no earnings.

Tomatoes left to rot in the field.

With no help from the government, the farmers are on their own to solve this dilemma.  Many are letting their crops rot in the field, because it costs more to pick, bag, and ship the produce to market, than what they can expect to receive from a buyer. As a Kiva Fellow, seeing the poverty and hunger here in Nicaragua first-hand, and knowing that this is the second poorest country in Central America after Haiti, letting food go to waste is an outrage.

Imported tomatoes can be found in supermarkets in Managua.

To understand how bad the situation is, Nicaraguans normally consume 60,000 lbs of tomatoes, and this year the farmers produced double that amount.  And it is not only tomatoes that exceeded expectations, but onions, cabbage, and sweet peppers too. Onion farmers have told me their earnings this year are 80% less than in previous years.

Only a few lucky farmers were able to export their produce to neighboring El Salvador and Costa Rica, where the governments restrict imports to protect their own farmers.

Meanwhile, I have heard one heartbreaking story after another as farmers sit on produce they can’t sell, and are forced to sell off their assets, including livestock,  to cover their debts, or face  going into delinquency.  To help the farmers, Kiva Field Partner MiCredito has begun to restructure the loans of the farmers to help them through this, but they cannot stop the downward spiral as the farmers are unable to take any new loans, which means they will not have the financing needed to sow their next crop, and so on. 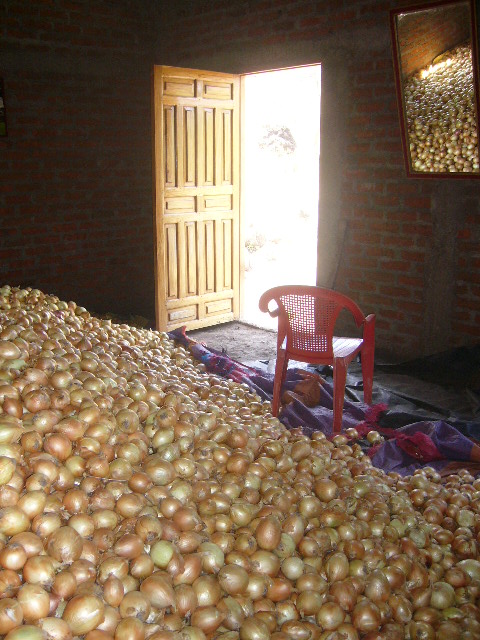 A Kiva borrower's home filled with onions, waiting for a buyer.

As for the Kiva borrower who is already 40 days late in paying off his loan, his case weighs heavy on my mind as he tries daily to find a buyer for his onions.  He and his wife have two young boys in primary school. They live in a one room house with a dirt floor and  no running water. They own a horse and a few cattle, that the farmer may have to sell to keep from defaulting on his loan.  The last news I received on his situation, was that he was restructuring his loan with Kiva Field Partner, MiCredito, to give him more time.

To avoid this adversity in the future, the farmers’ association has decided that next summer, starting in October 2011, the farmers will stagger their plantings in the three agricultural regions of Sebaco, Colita, and Estelí.