I Am The Wolverine

Conducting Borrower Verifications is one of the main responsibilities for many Kiva Fellows. A BV is essentially an audit of a borrower to ensure that they're a real person using their Kiva loan for its stated purpose and to assess its impact on their life. Needless to say, there's quite a few adventures to be had while spending three weeks on the road to do twenty BVs in Western Kenya. The following is an entry from my personal journal recounting one particularly trying day on the road.
May 4, 2015
Homa Bay, Kenya

We had a plan for my last set of borrower verifications. It was a good plan but all plans seem to go awry here. I arrived in Homa Bay by coach yesterday a little later than expected (who knew the 8:30 bus actually leaves at 9:45) but it didn’t really matter since I didn't have any plans for the evening. The hotel was actually quite nice and had working generators that kicked in during the inevitable power outage.
Today, I was supposed to meet up at 9am with Robert who would be my local expert, driver, and translator for three BVs in the area. In reality, I left at 1pm with Thomas and did two BVs. How? Robert was sick and sent Thomas in his place. It's rainy season now and last night’s rain turned the short route to town (15 minutes) into a muddy impassable mess so he had to take the long way (1 hour) to meet me at the hotel. On top of that, his motorbike was damaged en route which added more delays for repairs. Well, "this is Africa", as I like to say, and crazy stuff happens that would never happen at home so I fully expected things to go wrong at any given time. There's plenty of time left today so the delay is not a big deal yet. 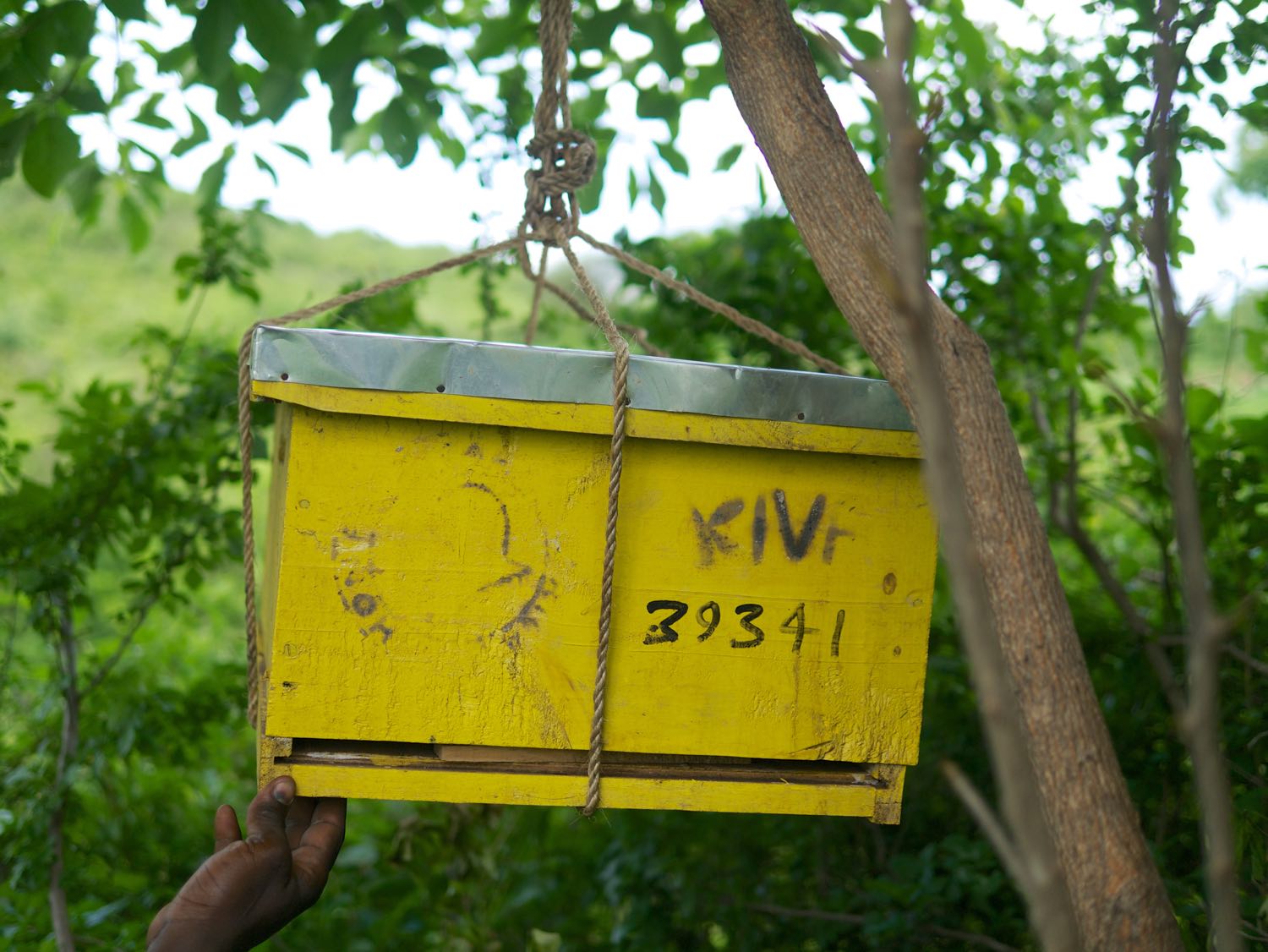 One of many Honey Care Africa beehives I will see on this trip
As we sipped on Stoney Tangawezi while awaiting repairs, Thomas received a tip from a bystander that the morning sun had dried out the short route enough to be passable so we can save ourselves 45 minutes. Yay! Not. We managed to traverse a couple of challenging mud pits with some difficulty until we encountered one that required a detour.
Thomas attacked the pit's embankment at a 45 degree angle but I think our motorbike was a little underpowered because we came to a dead stop about halfway up. With our momentum stopped, the motorbike tilted to the right in slow motion which was not good. Thomas struggled to right the bike and I planted my right foot into the ground with authority but it just sank into the mud and failed to stabilize us. Finally, the bike fell over and I fell backwards off the bike (conveniently avoiding muffler burns on my legs). My arms flailed out to brace myself but my butt and back also helped cushion the fall. Thankfully, I landed in dryish mud instead of a puddle so I wasn't a total mess. I got up, brushed off the caked mud and, oh look, there’s a little twig sticking out of my right palm. I yanked it out like it's no big deal (so as not to appear like a total newbie to Thomas and a few others on the road) and somehow there’s no blood at all. I am apparently The Wolverine. 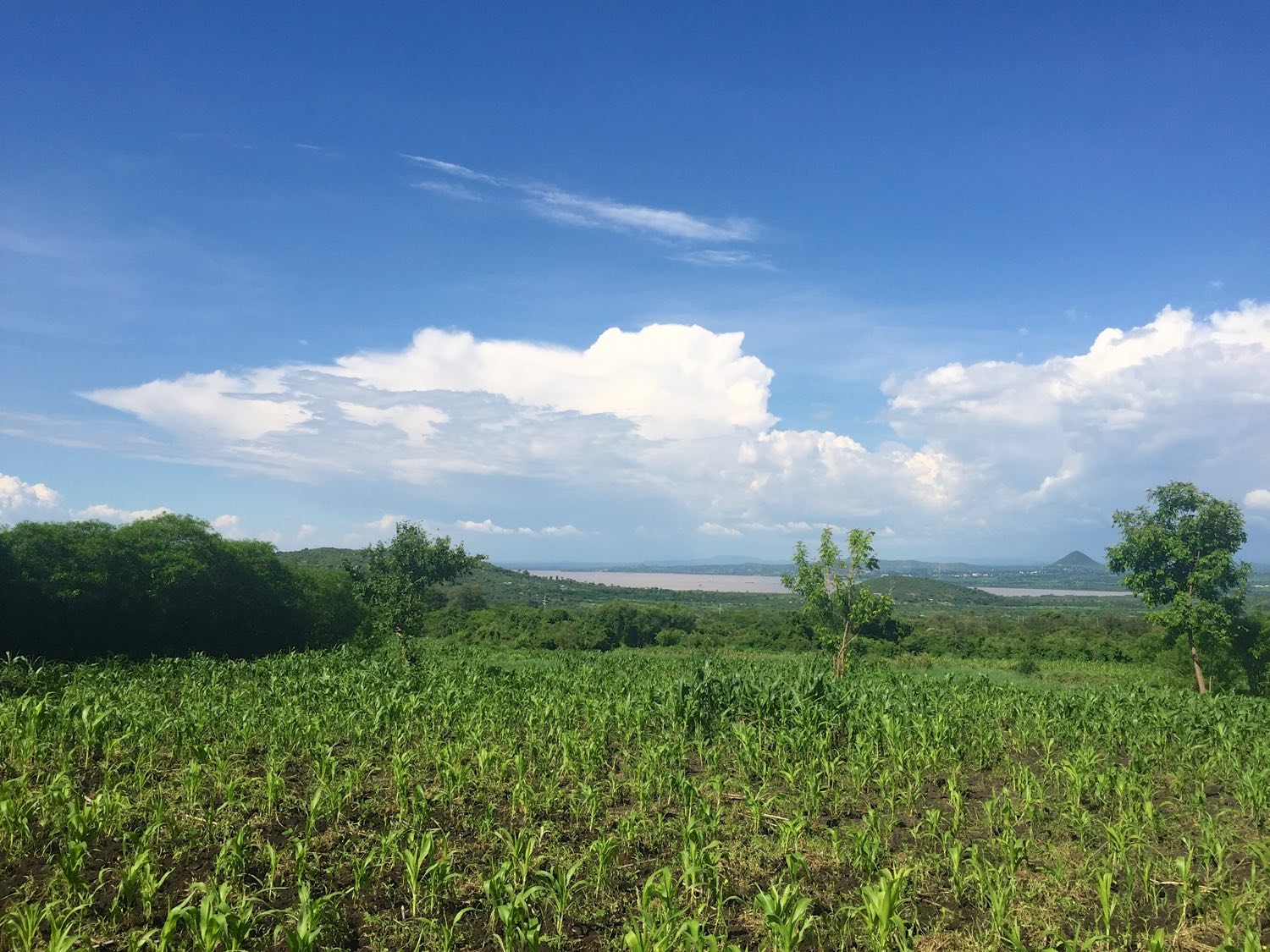 Home Bay is actually quite picturesque as long as you're not looking at the muddy "roads"
We regrouped, walked the bike to solidish land, and continued on. It was smooth sailing for the most part but, at one point, Thomas looked back to speak to me and barely missed driving straight into a huge open drainage hole. Hitting that would’ve been a terribly painful experience with a helmet on but we generally don’t do helmets in Kenya so I might have died or something. Or not because I’m The Wolverine.
Later, we caught a bit of air on a bad part of the "road" (think dirt/rocks/mud/random holes in the ground instead of smooth tarmac), landed with a heavy thunk, and the engine immediately started to make horrible noises. We didn’t make it too far after that. The motorbike died as we coincidentally arrived near our destination. Not being able to start it again, we pushed the motorbike to a nearby house and inspected it a bit even though we knew nothing about fixing it. Dejected at our latest turn of events, we decide to leave the bike for later and headed off on foot to our first borrower. 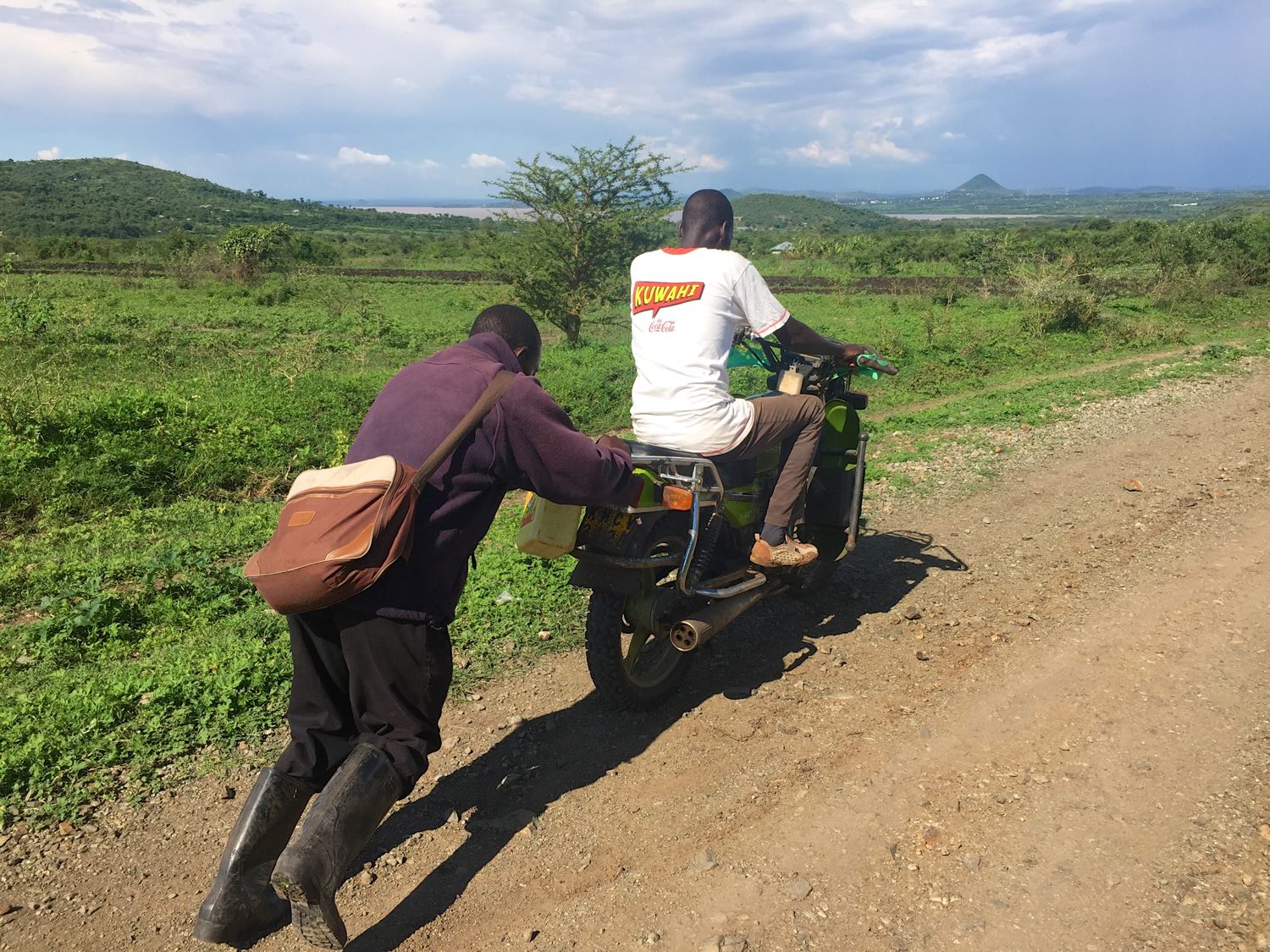 One of our futile attempts to push start the motorbike. Note Thomas's rubber boots. Not having that will haunt me the next day.
The BV went off without a hitch and Thomas recruited a friend to try his luck at the motorbike. Quite predictably, nobody was able to start the darn thing and then we spent the next twenty minutes trying to push start the motorbike but all we could manage was a few labored breaths out of it.
We finally gave up and left the bike at a nearby shop. Thomas then hired a local friend to take us to the next BV and the rest of the day went pretty smoothly. We even managed to dodge a thunderstorm that threatened us for an hour! I only got to do two of the three BVs today but there's enough slack in the schedule to do it in the morning. 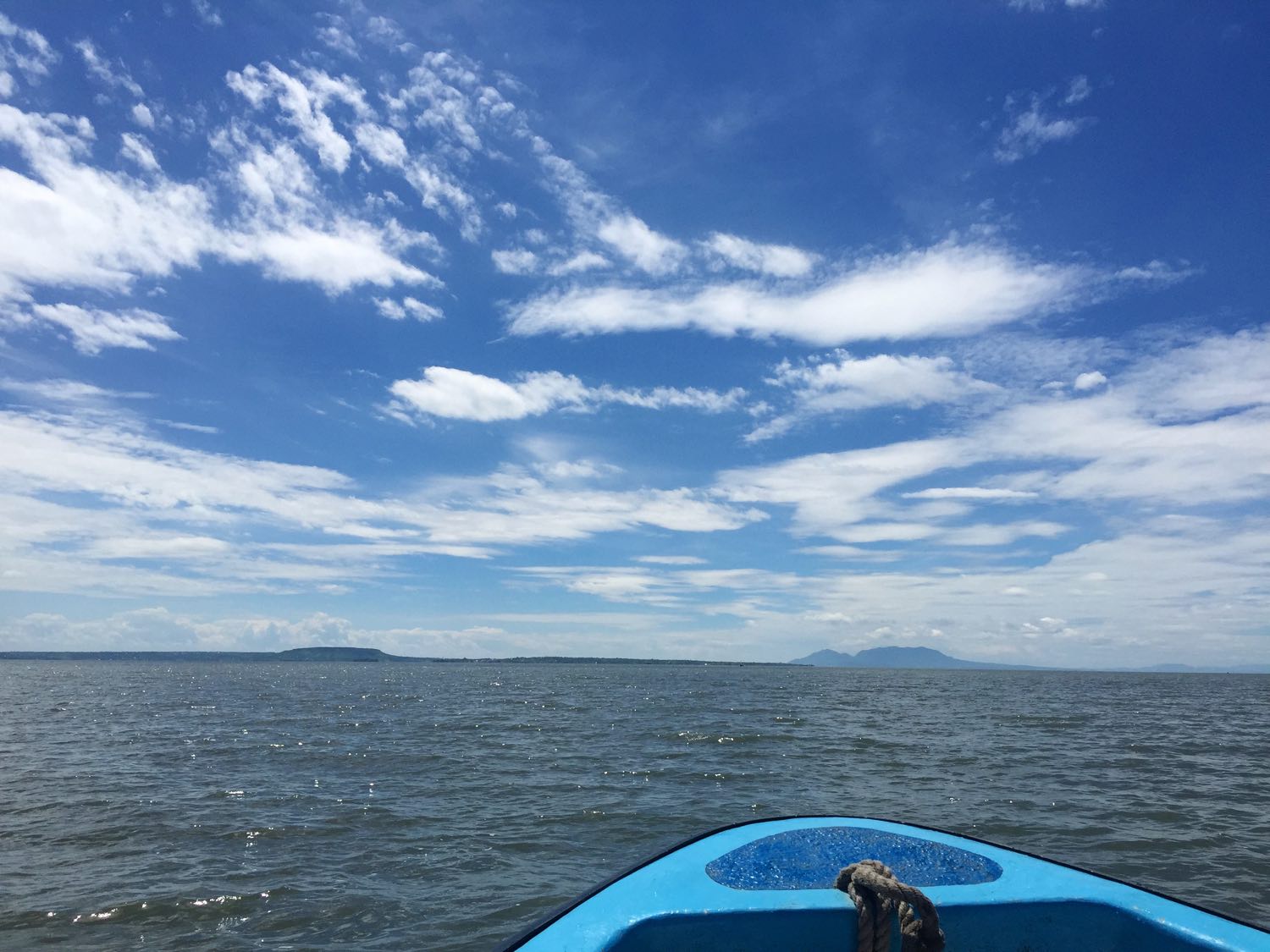 Lake Victoria. I took a small private boat instead of waiting three hours for the ferry. We didn't sink.
Tomorrow can’t possibly be as interesting as today but you never know. I have to be in Kisumu in the early afternoon so instead of taking the slow matatu, I might need to save some time by taking the ferry across Lake Victoria. I’m quite sure that’ll sink or something. Can The Wolverine swim?

We Kiva Fellows refer to days like this as "the trough" which is when everything is going wrong and you're hating life but you have to persevere because there's no other option. The thing is though, as challenging as it was for me, poor infrastructure and torrential rain makes life difficult every day for the residents of Homa Bay and countless similar towns throughout Kenya. Please consider supporting a Kenyan borrower. A little bit goes a long way. 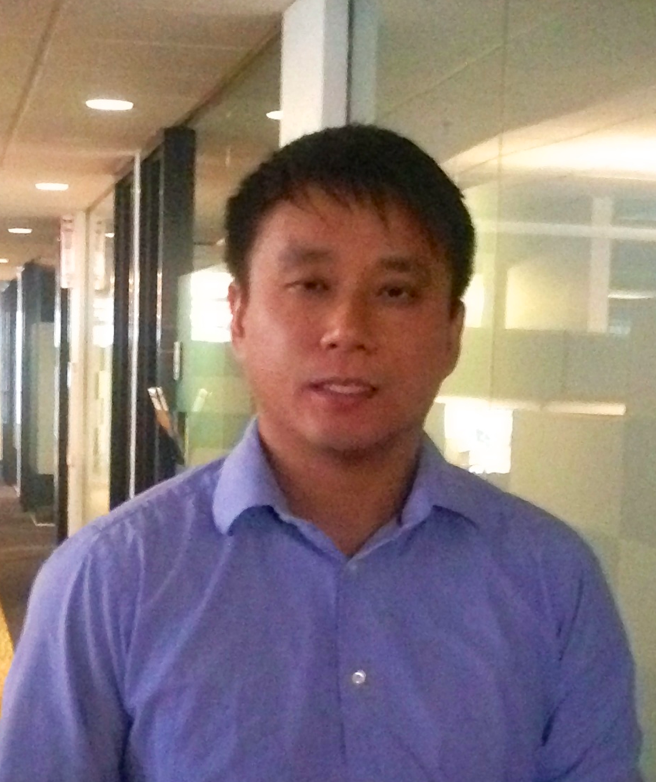 Tony was raised in the NY metropolitan area and is a graduate of Rutgers University. He began his IT career in Atlanta where he also completed his MBA at Georgia Tech. An avid traveler, he is passionate about experiencing a wide variety of cultures and has a keen eye for exploration and adventure. Lending on Kiva was a tremendously powerful way to stay connected to the countries he visited. Serving as a Kiva Fellow is a natural extension of his commitment to make a positive impact around the world.