It’s All About the Benjamins, Baby

What in the world am I talking about?  Well, today, March 13, 2010, is the ten-year anniversary of the US dollar being used in Ecuador.   That´s right, most people are unaware that the official currency of Ecuador (and Panama and El Salvador to name a few others) is the United States Dollar.

In early 2000, Ecuador´s economy was in “a deep recession, and output fell by 7.5 percent last year. The nation’s inflation was the highest in Latin America, at more than 60 percent, and in September, the Mahuad government defaulted on about half of Ecuador’s $13 billion in foreign debt“  In such drastic times, drastic measures were necessary and on March 13, 2000, the USD started to replace the Ecuadorian Sucre at a rate of 25,000 sucres = 1 USD.  By September 11, 2000, the USD was the only accepted form of currency, although sucres were accepted for conversion at the central bank until March 30, 2001.

The dollarization in Ecuador was extremely controversial and people protested the change of currency for numerous reasons.  One was simply that people didn´t want to get used to a new currency, new coins, etc.  Many people complained about not having change, vendors rounding prices up, and just overall being confused by these wacky new bills and coins.

A second hesitation was that Ecuador´s economy would now be tied to that of the US.  While Ecuador´s economy wasn´t doing so well on its own, this created an added risk.  I also have to believe that it must be a slap in the face to be using bills and coins that pay tribute to another country´s  history (although Ecuador does mint their own coins, more on that below).

An undisputed disadvantage to the dollarization of Ecuador is the issue of seigniorage, which basically means that the US makes money by printing a dollar bill for 4 cents and selling it to Ecuador for $1.

There was so much controversy, in fact, that President Jamil Mahuad was ousted from office in a January 21st, 2000 coup and Vice President Gustavo Noboa took over.  Unfortunately for the protesters, Noboa supported the dollarization and went ahead with the currency change anyway. 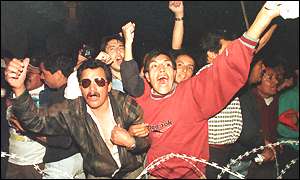 An interesting aspect to Ecuador´s use of the USD is that the country still mints its own coins up to denominations of 50 cents that are used in conjunction with its American counterparts.  The coins are the same size and shape as the American coins but have a different look to them.  I can pay for the bus with an American or Ecuadorian quarter (although the same is not true in the States, not surprisingly).  Ever wonder where all those Sacagawea dollar coins went?  Ecuador!  I see them everywhere and usually have at least 2-3 in my wallet at any given time.

The popular Sacagawea dollar, along with all the Ecuadorian-minted coins

So how far does a buck go down here in Ecuador?  Well, 25 cents will get you a bus ride anywhere in the city, a freshly peeled mango, a soda, or a bag of chifles (fried plantains chips…I can never go back to the potato chip now).  I bought a CD with 168 songs the other day for $1 (OK, it was a bootleg) and pay $1.60 for my daily lunch (which my coworkers tell me is expensive), pictured below.  However, the most basic Chevy hatchback will run you at least $13,000 in Ecuador, quite a lot considering the average income is under $5,000/year.

Of course I was 15 and living in Pennsylvania when the dollarization went into effect so how about a little local context?  I spoke with Marco, my coworker here at D-MIRO who has been with the institution since 1998 and saw first hand the effects of the dollarization on our clients and the microfinance industry.  Marco said that D-MIRO really struggled during the years of such high inflation because the loans the institution received were in USD (D-MIRO is part of a Norwegian-run mission) yet they were lending it out in sucres to the clients.  The clients repaid in sucres yet D-MIRO still had to repay their loans in dollars, which is where the inflation really took a toll on the institution.  So for the field partner, it was a welcome change.

But what about the clients?  Although Marco admitted that they are much  better off now with the dollar, he did mention that the dollarization was hard for the clients at first because the exchange rate was so high.  In 1997, 4,000 sucres were equivalent to $1, but because of the inflation in the sucre, the exchange rate was almost 25,000 sucres to the dollar by January of 2000, which the government used as the rate during the transition period.  So what´s the big deal?  Well think of your 401k through the last recession.  How would you feel if you were forced to liquidate in March of 2009, when the market had bottomed out?  Would you still be able to get that condo in Miami?  Of course maybe 25,000 wouldn`t have been the “bottom”…there is no way to know.  However, it still proved very difficult for many in Ecuador to be able to pay for their daily living expenses with such a poor exchange rate.

The biggest impact that the dollar has had on Ecuador?  Stabilization, says Marco.  With the dollar, D-MIRO´s clients can have more confidence in the financial markets and worry about more important things, like running their businesses well.

So next time you see that Kiva loan from Ecuador, you will know the full story behind the $25 the borrower is receiving…and you can wish Ben (and Sacagawea) a happy birthday!

Leigh Madeira is serving in Guayaquil, Ecuador with Kiva Field Partner Fundación D-MIRO as a member of the Kiva Fellows 10th class.  Please join D-MIRO’s lending team, make a loan to a D-MIRO entrepreneur or donate to Kiva today!