Community Loans: Another Level of Microfinance

I spent the last week with the research department touring the region, tagging along on a market research survey.  On the last day, we were driving through a coastal town when the paved road turned to dirt.  According to the driver and director of the research department at NWTF, when the road turns to dirt, you know you are headed in the right direction.  Sure enough, within a few minutes we reached a squatter community bustling with people.  (In the Philippines, the government protects squatters, and large communities spring up on other peoples’ lands.)  The road was just wide enough to fit the van and lined with nipa huts and sari sari stores.  We passed by two makeshift basketball courts before coming to the end of the road.  We parked the van and split up to walk around and talk to the people.  Unfortunately, the interviews are all in Illonggo, so I chose to follow the director down to the shore.  He began talking to a group of women on the beach holding their infant children.  He asked a few questions, one of which is particularly interesting.  If they could have a loan to spend on anything in their community, what would it be?  Their response: a storage tank for diesel fuel or an icemaker.  I’ll explain why this is important, but first some background. 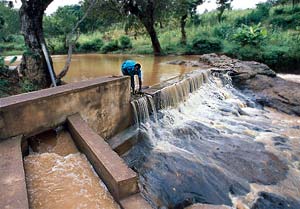 A micro-hydro facility in Africa.

A community loan is exactly what it sounds like – a loan that benefits and is paid for by the community.  In a partnership with the Asian Development Bank (ADB), NWTF began offering community loans in a few branches.  The women in each center are part of a cooperative, which can take a loan on behalf of its members. The cooperative chooses an investment, which NWTF will fund through a community loan.  The women pay back the interest and principle, which is, of course, far more than any individual member could shoulder on her own.  These types of loans work best in areas that have a common need (often the case in single-industry communities).  So far, NWTF has funded several of these projects, including a rice mill for one village, and a micro-hydro facility for another.  In both cases, not only did the entire community benefit – the rice mill cut out the middleman, bringing higher profit margins, and the micro-hydro facility electrified the barangay (village) – but the community also made money on the venture.  The first one is buying unmilled rice from the surrounding towns, milling it, and selling it to local dealers.  The second one is selling electricity to other homes that are not part of the cooperative.

Back to the present.  In this community, there are approximately 1,000 homes.  Most families derive their income from diwal fishing.  Diwal are large oysters that are popular here in the Philippines.  They are shipped to Manila and other parts of the country to be served in restaurants.  Everything revolves around the fishing industry in this village.  Crab traps are stacked next to a house on the beach.  There are pails of small fish everywhere, waiting to be distributed to the  markets in the provincial capitol or sun-dried on long racks to be sold as dried fish – a common business among NWTF clients in these types of communities.  We ask whether 5,000 pesos ($100 USD) would be sufficient for a microloan.  For some people, they respond, 5,000 would be enough.  But many families would require a loan of upwards of 20,000 pesos to purchase a new motor for their pump boat.  For new clients, this isn’t possible.  Project Dungganon (NWTF’s microlending program) members start at 5,000 pesos, and work their way up to 20,000 pesos over the course of 5 or 10 loan cycles.  So if this village is brought on-board, these potential clients will have to start small.  A community loan, on the other hand, could potentially enhance the earning-potential of everyone in the village.

On the beach where we are standing, there are probably 40 pump boats. Some are on the beach for repair, while others anchored just off the shoreline.  Each is outfitted with an outboard motor that runs on diesel fuel. If this community could install a storage tank and buy diesel fuel in bulk, they could collectively reduce the input costs for running their fishing businesses, resulting in higher profits for everyone.  Similarly, if they had an icemaker, the fishermen could store their catch on ice.  This would allow the community to function as a co-op, selling enough volume to perhaps eliminate middlemen or time the market and get better prices for their catch.  These are the direct benefits of a community loans.  As with anything in microfinance, there is a ripple effect, producing many indirect benefits as well.

In a small and very poor barangay (village) such as this one, money tends to stay within the community.  People buy their clothes, detergents, and other necessities at the sari sari stores and eat locally prepared food.  They use local construction workers to build homes, and rent fishing equipment from vendors in town.  Additional income at the primary producer level (i.e. the fishermen), which comes from outside the community, circulates continuously until it is spent elsewhere.  The local businesses make more money as a result, which they can invest in their childrens’ education or putting an addition on their home.  In a squatter community, a family could even potentially earn enough to buy the title to their land.  In other words, when the primary industry becomes more efficient and profitable, the community at-large inevitably becomes the beneficiary.

Kiva does not offer community loans on the site because, as many of you know, it is a site that supports livelihood loans.  In other words, you lend money to individuals, who, in turn, invest in starting or maintaining a business.  Community loans are much broader in scope and scale, and may be a bit higher risk.  Community loans are not widely used here in the Philippines, and I am not sure about the rest of the world.  They have revolutionary potential because of the broad and sustainable impact they can have on a community.

Please help NWTF achieve its mission of serving the poorest communities in the Philippines by joining the NWTF Lending Team. Also, if you have any other questions about NWTF and their work, send me an email.