Phonecards and Peanuts: Looking at Micro-finance through the Macro Lens

Topping up one’s phone credit is never a problem in Dakar – on every street corner you will find one, or usually three or four young men hawking the same exact Orange Telecom cards. They offer the exact same cards, in the exact same spot, at the exact same time. Peanut vendors are equally ubiquitous, often stationed only a feet away from each other, selling the same peanuts, in the same 50 Franc increments.

These vendors often rarely have many other avenues for generating income. Many come from the countryside, where subsistence farming is usually the one and only option. They prefer the hustle and bustle of the city. They prefer the 500, 1000 or even 2000 CFCA (between US$ 1-4) they can make a day. Who can blame them. 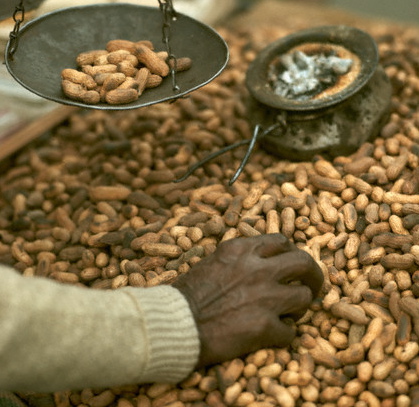 But when you add up all of the thousands of phonecard, peanut (cigarette, tissue, fruit …) vendors, you begin to see why this country, and indeed many of its neighbors, are still so poor.  With so many young, able bodied workers devoting long hours every single day to hawking the same commodity items, it seems like a 0, or at best 0.0001, sum game. It is hard to argue that each additional hawker is reacting to increasing demand. The same amount of phonecards would be sold with one guy per street corner instead of four.

Further up the food chain, the story seems the same. Looking through the stack of loans at a local branch, every single loan application the loan officer read-off was for a small-scale merchant. Many were selling the same exact Malian fabrics, Guinean fruit or Chinese mobile phone accessories as the boutique one hundred feet away.

These merchants often do see an increased income thanks to micro-loans. Many go on to invest these gains in the health and education of their children, or in building a home or diversifying their business. All very positive for both social and economic development. And there is the intrinsic value of participating in the formal financial sector – supporting the integral institutions of a functioning economy. But at the end of the day, the amount of added value to the economy from simply selling an (imported) good hits a peak quite quickly.

We are often caught up on the success of micro-lending on the individual micro level, but how does it add up in the aggregate? Is financing vendors of commodity items adding to the well being of the community and nation as a whole? Is the pie actually growing or is it just being sliced up into more and more pieces? Does micro-finance really have the power to propel an entire country out of poverty?

I invite your ideas and comments – these are tough questions, and ones to which I’m sure Kiva fellows and lenders can offer good insight.

Why not make your next Kiva loan to UIMCEC? We currently have two loans from the Dakar area. Check ‘em out  UIMCEC borrowers