I eat at Kumba’s at least three times a week. I’ve always been the type that likes to have my “regular spots” – my coffee shop, my bar, my newsstand. I like to think of Kumba’s as my lunch spot. It doesn’t hurt that everything is so homey. There are only three tables, so people tend to share and chat. By the time I had made three visits, I was granted to privilege of walking through the door to “Eh! Step-nie!” followed by enquiries after the folks I usually eat with and their whereabouts. The food is tasty and it’s fast, and on very rare occasions when she knows I’m coming, there’s onion stew (my favorite so far). About a week ago, I popped my head into my Kiva Coordinator’s office to let him know I was off for “apotho lunch” (me and my weak American stomach eat lunch about an hour before everyone else in the office). He asked where I was going, and I told him Kumba’s for Cassava Leaf. “Kumba?” he asked, “You know, she is a client”. (check out her current profile here) 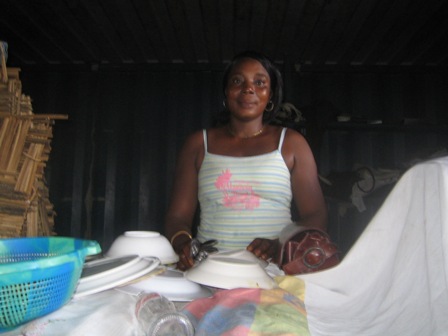 I did NOT know that, and it excited me a great deal. I’ve been fortunate in my ability to have meetings with a large number of clients since my arrival in Makeni, but I often feel a bit rushed and impersonal. The need to communicate through a translator, though essential for my Krio- and Temne- speaking clients, can seem like a wall. Sometimes I suspect I’m getting the lip service answers of “to invest in my business” or “yes, microfinance has been wonderful for me” to my questions, because borrowers can be so startled and awed by my unannounced appearance in their place of business, snapping my camera and spouting my questionable Krio. I like to think, however, that Kumba and I have become pals in my time here. I look forward to seeing her in the afternoons. When I ask her “Eh ma, ow de day?” I’m really curious about how her day has been so far, and what she’s been up to. She seems to feel the same way. I mentioned to my coordinator that I would love to interview Kumba for a blog.

At the beginning, he was clearly a bit skeptical. Turns out Kumba has been interviewed before. Some while back (it can be very difficult to pin down exact dates and times here…) a reporter from Scotland visited Makeni to research a human-interest piece on microfinance, and he chose to focus on Kumba. From the sounds of things, she was promised everything but the kitchen sink: donor money would flow in, her restaurant would become famous, etc. etc. (bear in mind I get all this third-hand, but tsk tsk, reporter man). As is often the case in such scenarios, the man returned home, probably wrote a beautiful and moving story about a woman’s struggle against the odds, and Kumba never heard a word again. One can understand why she would be a bit reluctant to sign up for round two.

Determined to at least try, I stopped by the restaurant for lunch yesterday, and started talking to her about SMT and my work at Kiva. I mentioned that I would love to write a story about her for lenders to read. Her smile didn’t waver, so I pushed forward. Not wanting to repeat the mistakes of my predecessor, I tried almost too hard to be honest with Kumba: this will not mean any extra money for you or any extra funding. Most of the people who read this will probably never visit Sierra Leone, so there will not be any additional business. It won’t affect your ability to get new SMT or Kiva loans in the future positively or negatively. After I painted this rosy picture of my post, Kumba waited for a moment, then just grinned, nodded and said “s’okay. Now?”. I felt a little flutter knowing that, even though it meant nothing for her personally, Kumba would still do me this favor. We ARE friends!

Turns out Kumba has taken out three loans through SMT so far (she is currently paying back her third). Before opening the restaurant, she worked at two different hotel/restaurants in town, but was unhappy in her inability to manage her own work and hours, and a bit disappointed in her, ahem, erratic paycheck schedule. She opened the restaurant 1 year and 8 months ago (the exact date and the quickness with which she was able to give it to me are testaments to how much this date meant to her). With her first loan, she purchased general supplies: food, drinks, cooking gear. The second went to upgrading her kitchen and getting more pots, pans, and utensils, in order to service new customers. It is the most recent loan, however, about which Kumba seems most proud. In addition to even more general supplies such as food and cooking gear, she purchased new tables and chairs so her customers could sit comfortably. She surrounded the wood-frame building in mosquito netting to keep the majority of bugs out of everyone’s food. She even got some tablecloths and posters for the wall (which, I have to say, really do make the ambiance). She’s even considering a music system to keep people entertained while they eat. Now, rather than working for unreliable managers, who demand too much, don’t allow sick time (missing a day of work due to illness is cause for dismissal at most jobs in Sierra Leone), and rarely pay wages, Kumba is her own boss, and even has a small staff to manage herself. She is clearly proud of her restaurant and her accomplishments, and I like to think of her as an “empowered woman” (though this is a super-American term, I think) who has some control over her life and her future.

I know sometimes it can be easy to see the down-side to microfinance, and the burden it places on people. Sometimes we all wish there was another way, or a better way, to make sustainable change for the working poor in developing nations. I agree that dialogue needs to be kept open: it’s the only way more ideas will be generated. I also recognize that for many, microfinance is not all peaches-and-cream, and that it can even make life worse. When I start to get down on it though, it’s nice to go to Kumba’s, grab some onion stew, and bask in the proud glow of a woman who used a small loan to seize control, and create a new future for herself.