Doña Cony is quite the savvy business women.

She lives in Batahola Norte, a neighborhood in Managua, Nicaragua, the second poorest country in Latin America after Haiti, according to the World Bank. 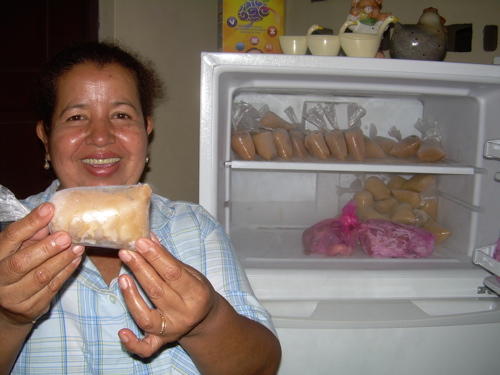 She sells her own homemade ice cream, rents rooms in her house to visitors who come to Nicaragua to volunteer, teach or study and cooks them delicious meals served at the family’s dining room table. On weekends she runs a catering business for neighbors celebrating special occasions, including weddings and quinceañeras or coming-of-age parties when girls turn 15.

In a large plastic bowl in her outdoor kitchen in the back courtyard, Doña Cony stirs the ingredients for ice cream – milk, fruit, sugar, cinnamon and rum – and pours the cool mixture into individual-sized plastic bags which she freezes overnight in her refrigerator.

All day long in the 90 degree muggy heat, school children, mothers with babies on their hips  and sweaty young men who play basketball and soccer in the park across the street come to her front gate and ask, “¿Hay helado?” — “Is there ice cream?” She usually offers only two flavors a day and sells them to customers who bite off a corner and slurp down flavors bursting with coconut, mango, guayabana, ciruela (prune), pitaya, pineapple or mamón (from the lychee family).

Two weeks ago when the cost of milk jumped, Doña Cony raised the price of her ice creams from 3 cordobas (15 cents) to 4 cordoboas (20 cents). When she told her customers about the price increase most customers did not have the extra cordoba to spend but Doña Cony told them to pay her back next time.

A year ago she used to sell 500 ice cream bags in three days but now sells only 50 in the same time period. In Nicaragua, according to The FINANCIAL 2009, food price inflation rose from 11% annually in January 2006 to 34% annually in August 2008. The impact of these price increases clearly has a disproportionate impact on Nicaragua’s poor as a larger percentage of their income is devoted to food costs.

Doña Cony’s dream, as announced in the first episode of “As the Microfinance Mundo Turns” is to open her own restaurant or fritanga as they are called in Nicaragua. There is no fritanga in her immediate neighborhood.

Will Doña Cony seek credit from one of Kiva’s field partners in Nicaragua? Perhaps CEPRODEL? Will she qualify? What does she have to do to get a loan? Stay tuned for upcoming episodes of “As the Microfinance Mundo Turns.”