Not long after my Kenya Airways flight slalomed into N’djili Airport, I began to hear the noise.  Drum beats.  Cheering.  Flag-waving masses of people.  “Wow,” I thought, “what a welcome.”  I had heard the Congolese were welcoming, but this is a bit over the top! 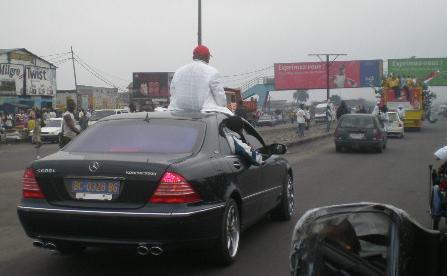 A Hero’s Welcome – Note the caravan of fans at the top right!

It turns out the ad-hoc parade wasn’t for me (Bummer!) but for the coach of one of the club football (soccer) teams here in Kinshasa.  Nevertheless, the conglomeration of people and noise proved to be an ideal introduction to this pulsating metropolis.  With 8 million souls, Kinshasa is considered by many to be the largest french-speaking city in the world.  It is the capital of the Democratic Republic of Congo (DRC), the third largest country in Africa, bordering almost all major conflict regions on the continent.

Usually, when I tell people I’m heading to the “Congo,” I get the same almost-scripted reaction.  Puzzlement, worry, doubt – “why would anyone willingly go to the DRC?”  I suppose the Congo has come to be seen as a basket case, a land of war, violence and suffering.  What I see, however, and what I hope to convey through this blog over the next two months, is Congo as a land of opportunity, a land of hope.

Rich in mineral wealth, and relatively stable since elections in 2006, the DRC seems to have finally turned the corner after centuries of violence and exploitation.  This is where you (Kiva Lender) come in.  By lending directly to entrepreneurs in the DRC through Kiva you are, in a way, reversing history, connecting with the Congolese on a basis of dignity and mutual respect.  So be sure to keep an eye out for DRC loans this summer and beyond, as the MFI I am working with, Hope DRC, plans to ramp-up its Kiva lending!

John Soleanicov is serving as a Kiva Fellow with Hope DRC (KF8).