Imagine that you’re a young West African woman.  You live in a small village, and you had to quit school at a young age to help your parents take care of your brothers and sisters, so employment prospects are slim.

Your grandmother approaches you with a job offer.  She tells you that, with the career that she has in mind, you could make up to $200 a day, along with gifts of palm oil, yams, and chickens.  You would be carrying on a family tradition, a religious tradition, and a cultural tradition, and the people in your town would respect you and your work.

So, it’s no wonder that many African women still take up work in the practice of female genital mutilation, despite the fact that it is illegal in many countries.

According to the World Health Organization: 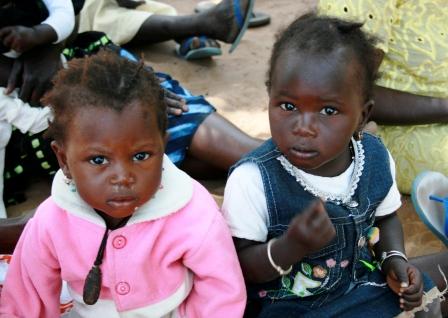 Senegalese babies in a rural village. FGM procedures are mostly carried out on young girls sometime between infancy and age 15, and occasionally on adult women. (Photo courtesy of Liz O'Donnell, KF7)

Many women who work as “excisors” are unaware of the medical complications caused by FGM.  Furthermore, the tradition of FGM is often believed to be a part of Islam, but actually has no religious basis.  Often, once the excisors learn the truth about FGM, they decide to change their careers.

Ouraye Sall, from Senegal, is one of these women.  “Ten years ago I could never have imagined that I would be a leader in a movement to end the ‘tradition’ that most women in my community have undergone. Not only did I believe it was a religious obligation, but I myself was the one who operated on girls in all the surrounding communities.”  Oureye is now an advocate for ending FGM in Senegal. “Ever since I learned that FGM is not required by Islam and that it is a violation of girls’ and women’s rights, I stopped practicing.”(1)

But, what options do these former excisors have, once they decide to renounce their lucrative careers?

Here’s where microfinance comes in!  There is a growing movement to link anti-FGM health education campaigns with microlending programs that help provide alternative income-generating activities for former excisors.  These women receive microloans to start new businesses, and agree to attend informational sessions on the dangers of FGM.

According to the advisor of one of these programs in Togo, the former excisors are not the only ones to receive the FGM-linked microloans.   She says, “if you attack the supply of practitioners, but you don’t reduce the demand, then FGM will continue.  Only some of the women who get loans are cutters. The others live nearby.  We must work with the entire community.”(2)

In Gambia, a tiny sliver of a country situated on the West African coast, the Gambia Committee on Traditional Practices affecting the health of women and children offered $200 microloans to 19 former excisors last year in a public ceremony as a part of the Alternative Employment Opportunities Project.  The recipients vowed to discontinue their former work and to help protect female children from FGM.  The loans were followed by training on microfinance and management of small scale business enterprises.  The women planned to use the money to enter into a variety of income-generating activities, including animal rearing, petty trading, and pottery.(3)

While microloans provide an alternative for the former excisors, it is up to the women themselves to make the difficult decision to renounce their former careers, and to stick with their decisions.   According to the president of the Benin-based Women in Law and Development in Africa, “I cannot tell you how many public declaration ceremonies we have had with women swearing ‘never again’.  When we do follow up, we find they are back at it.”(4)

As the saying goes, “you can lead a horse to water, but you can’t make him drink.”  And it becomes even more complicated if the water is a microloan with 20% annual interest.  And if the horse has to work in the hot sun selling peanuts for 5 cents a bag in order to pay back the water/microloan.

Nonetheless, the rate of FGM is declining, and microfinance provides a key component that enables the change.

Just one more way microfinance is changing the world.

I am a Kiva Fellow, Class of KF6/7, serving three months in Lome, Togo, and three more in Thies, Senegal. Please check out my current MFI, IMCEC, and see all of their fundraising loans here!