I once heard that Kentucky Fried Chicken conducted a market survey on their brand and found that the words “Kentucky”, “Fried”, and “Chicken” each had negative psychological associations. Hence the change to the more deliciously ambiguous “KFC”.

If this is true, then “Kiva Happy Hour” must surely invoke feelings of warmth and joyous goodwill in most people. Take one fuzzy “innovative-slash-fantastic” organisation, add cheap drinks and nice people, and, as we say in England, Bob’s your uncle… good times.

This is precisely what happened in the Foreign Correspondents Club in Phnom Penh on Thursday in the third week of February. Thanks to everyone who came and to Sanjaya Bagopunyasena for doing most of the organising. 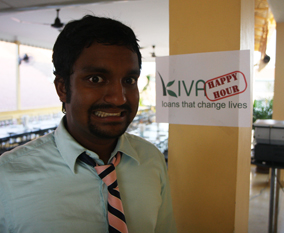 Kiva Fellows new and old (I mean old as in KF6, not age ok?)

Talking about microfinance and enjoying it

Step aside Gucci… microfinance t-shirts are SO this season. Hitting the runways (mainly of airports in West Timor and Phnom Penh) are the brand new limited edition Kiva “Loner/Loaner” t-shirts. Designed by Hollie Harrington of London, and produced in Phnom Penh, Cambodia, these shirts will add a dash of microcredit chic to any outfit. 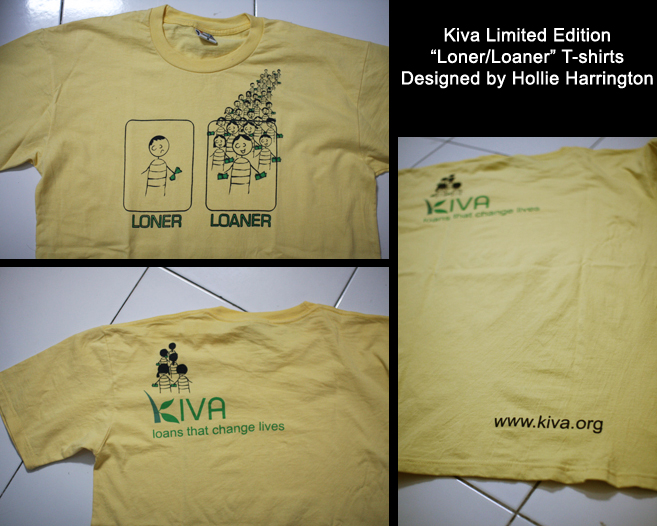 Are you a loner or a loaner? Or perhaps even a lender?

If you would like one of these t-shirts there are a few left over in the AMK office in Phnom Penh. Otherwise contact me and I can send you the design files so you can get them printed locally. But only if all profits are re-invested on Kiva!

Kiva Fellows Ball, Briggs, and Dunbar looked Danger squarely in the eye and said “Not today, we’ve got Kiva work to do!” when their plane was struck twice by lightning en route to their new assignments. Thanks to the Flip cameras distributed by Kiva and in true Kiva Fellows tradition this near-death moment was, of course, captured on video. OK so I added sound effects.

Flip video cameras: So simple, even a racoon can use it

Successful applicants for the Kiva Fellows programme generally need to be a bit tech savvy to handle the equipment they will use in the field. But the new Flip video cameras that were issued to KF7 are reputedly simple enough that even monkeys can use them.

Upon hearing this, I reacted as any sensible person would. “Sure, but how about racoons?”. 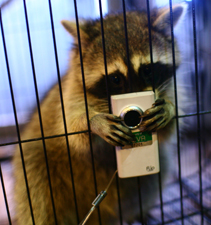 "How do you paws this thing?"

Note to Kiva: No Flip video cameras were harmed in the making of this video.