Poncho, then Expectations, slashed on a trip to the country

The morning commute to the DINARI office on my motorbike no longer takes 30 minutes since I found all the shortcuts (by getting thoroughly lost) so I hesitantly say that I’ve “hit my stride” here in Bali.  Nothing wakes you up like an exhilarating bike ride at 7:30 am, dodging erratic drivers, enormous potholes, stray dogs, pedestrians in the middle of the road, and excessively crowded streets.

Last Sunday I loaded up my bike, said farewell to my two roommates from Jakarta and started the 2-3 hour drive, solo, to the DINARI office in Melaya, a small city in west Bali, where I’d be spending the week.  Somehow it didn’t occur to me that leaving at 4 pm was a bad idea, especially given this is rainy season in Bali.  By 5:30 the sky had turned completely black, the clouds felt like they were right above me, and I knew I was about to get very wet.  I stopped to throw on the $2 poncho I’d purchased just before leaving and covered my backpack just before the skies opened up.

It was the worst storm I’ve ever been in.  There I was, a relative novice on my bike, trying to find a city I’ve never been to in the pouring rain and impending nightfall.  Thankfully there weren’t many roads where I was going (and mine stayed free of flooding) so I took it slow, kept heading west, and eventually arrived in Melaya sopping wet and my poncho in tatters, but with little additional fanfare.  But let’s be honest here, that was fortunately the low point of Bali experience thus far and I learned a valuable lesson in preparedness and respect for the term “rainy season.” 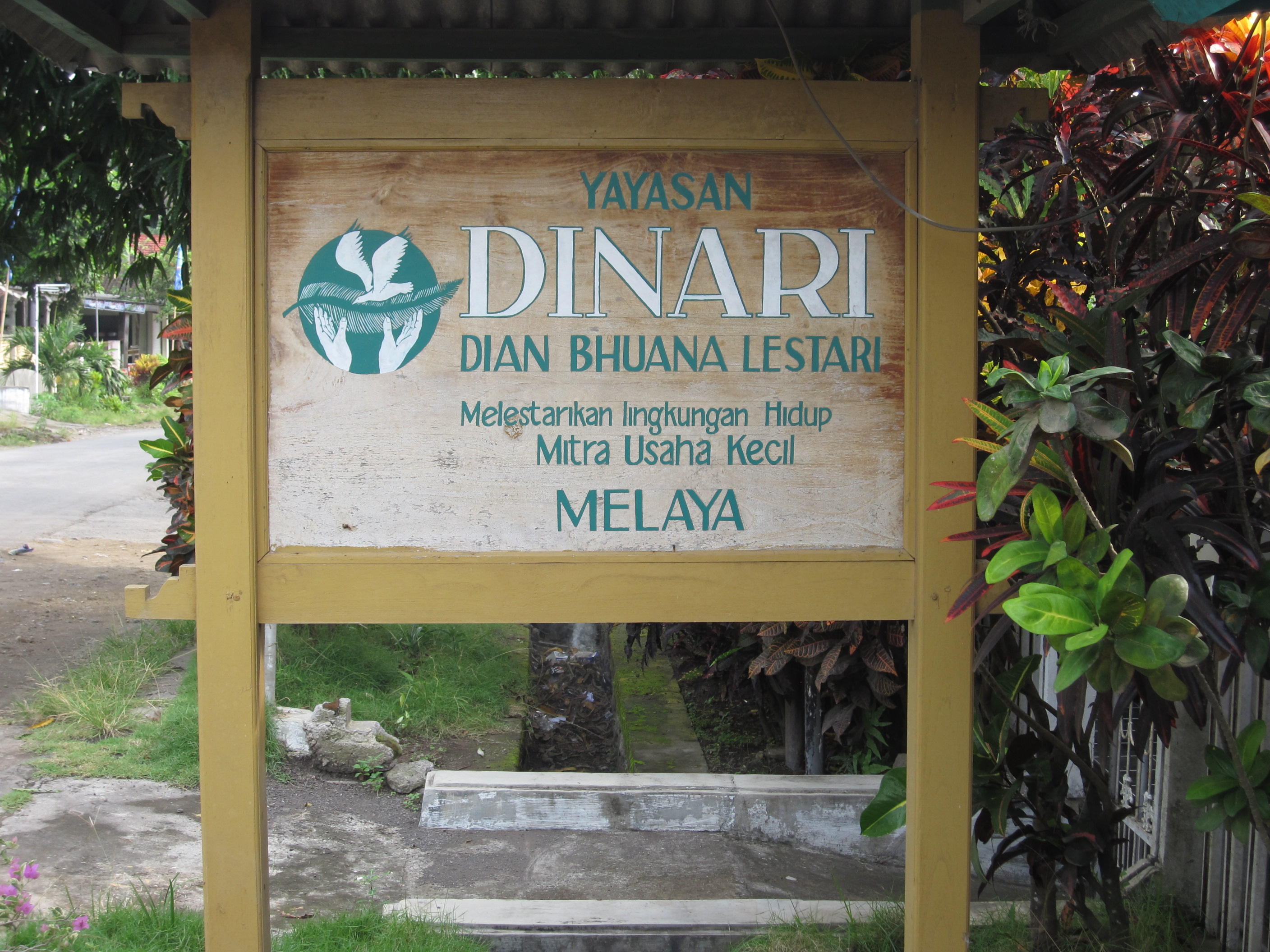 The next morning, with my “I-think-I-can-journey” over, I arrived at the office rested and dry and was greeted by an exceptionally friendly staff.   They proceeded to serve me mounds of traditional Indonesian breakfast goodies and coffee until I was uncomfortably full and hopped up on caffeine.  The DINARI office in Melaya is a fraction of the size of the HQ office I’d come from.  I welcomed the relaxed atmosphere and quieter streets – the “country” pace of things.  It felt like I’d gone from Manhattan to Montauk and I loved it.  Although, being the only guest at the only hotel in town was a tad strange and I’d be lying if scenes from The Shining didn’t cross my mind as I walked to my room at night.

DINARI was founded in 1992 in Denpasar, the sprawling and densely populated capital city of Bali.  DINARI’s roots lie in the rural, largely agricultural communities of west Bali.  The Christian community of Blimbingsari (blimbing is star fruit; sari is the essence of something) was established in the outskirts of Melaya in the 1930′s and is where a number of the DINARI staff grew up, including the founder and CEO Pak Alit.  (The previous Kiva Fellow working with DINARI gave an excellent description of the history of the Christian community in Melaya, which can be found here.)

The Protestant church at Blimbingsari

The majority of borrowers the Melaya branch works with are engaged in agricultural activities of some kind – a great many are pig breeders and farmers.   Despite it being smaller in size, the Melaya office’s  borrower portfolio is larger than the headquarters in Denpasar.   It struck me that DINARI’s mission – to “raise society’s awareness of environmental issues and to provide opportunities for people in chronic poverty to improve their lives” – may be better fulfilled at the Melaya branch, at least in terms of the environmental aspect of the mission.  So many of the clients in Melaya literally live off the land.

For a city of boasting 10,000 residents at most, Melaya is incredibly diverse.  During the 10 minute ride between my guest house and the office I passed Muslim girls heading off to school with brightly colored scarves covering their heads and Hindu families leaving morning offerings at their family purah (temple).  I was awed  by how well these communities coexist together in this small corner of the world. It reminded me of a term I’d learned when I was studying in Barcelona that the Spanish had used to refer to the peaceful coexistence of Christian, Muslims, and Jews during the Middle Ages: convivencia (“the  coexistence.”) 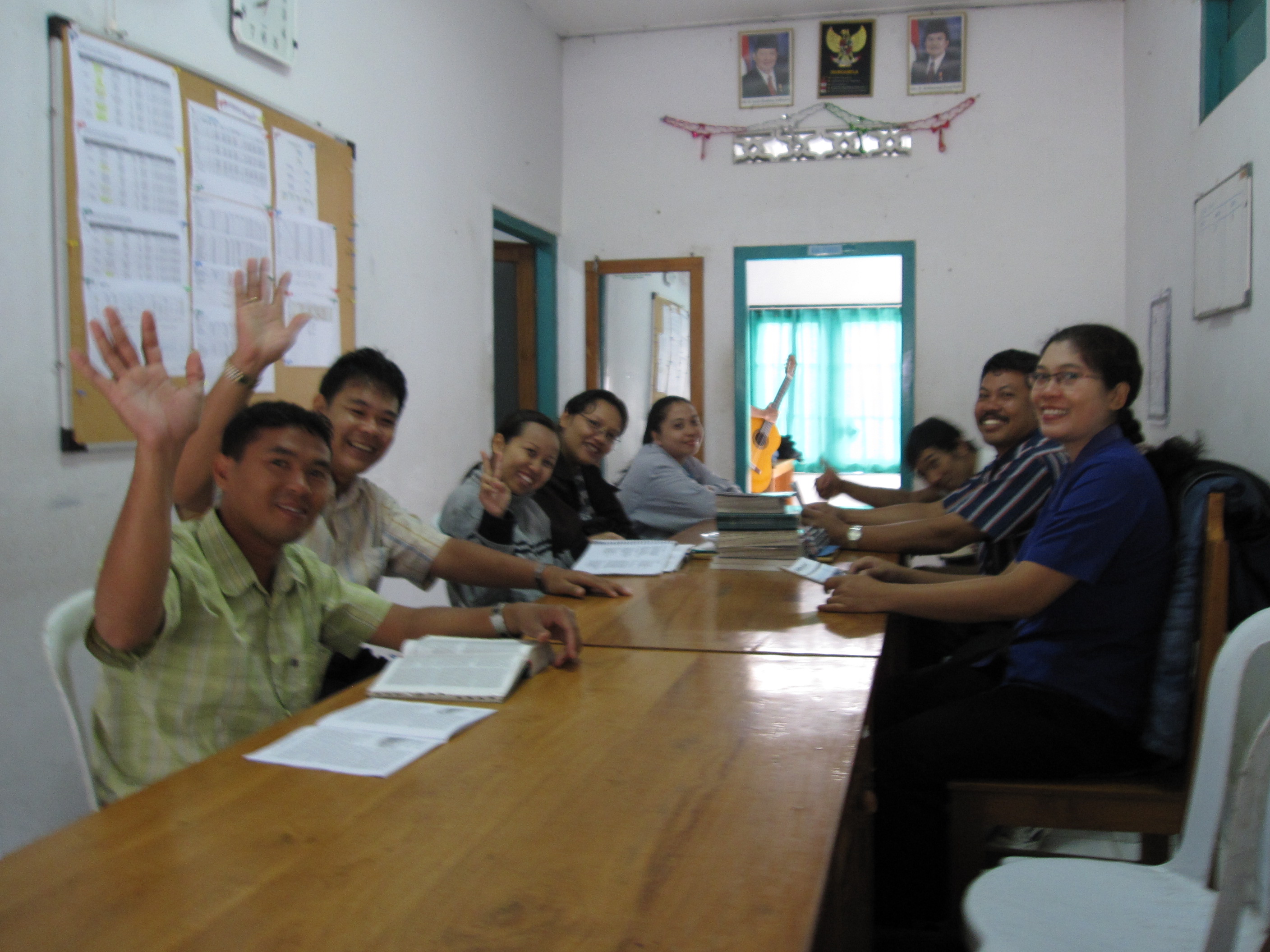 In addition to really appreciating the slower pace of things this trip to Melaya offered, I particularly liked the work I was getting to do. Zeruya, the Kiva Coordinator at the Melaya office, had created an ambitious schedule of client visits for my week (the first of 3 I’d be spending in Melaya.) The itinerary called for us being on the road a significant portion of the day, which was just fine by me.

The Melaya office’s operations cover an enormous area, so each day we’d have a 30-45 minute drive on the coastal highway just to get to the junction where we’d begin our ascent inland. Compared to the suburbs of Denpasar, the terrain in west Bali is mountainous and the climate much cooler. But the scenery is spectacular. Think beautiful lush green rice paddies stretching until they collide with the deep blue of the Indian Ocean, monkeys in the trees by the side of the road, and the clearest sky I’ve ever seen – punctuated by a vicious daily afternoon torrential downpour. 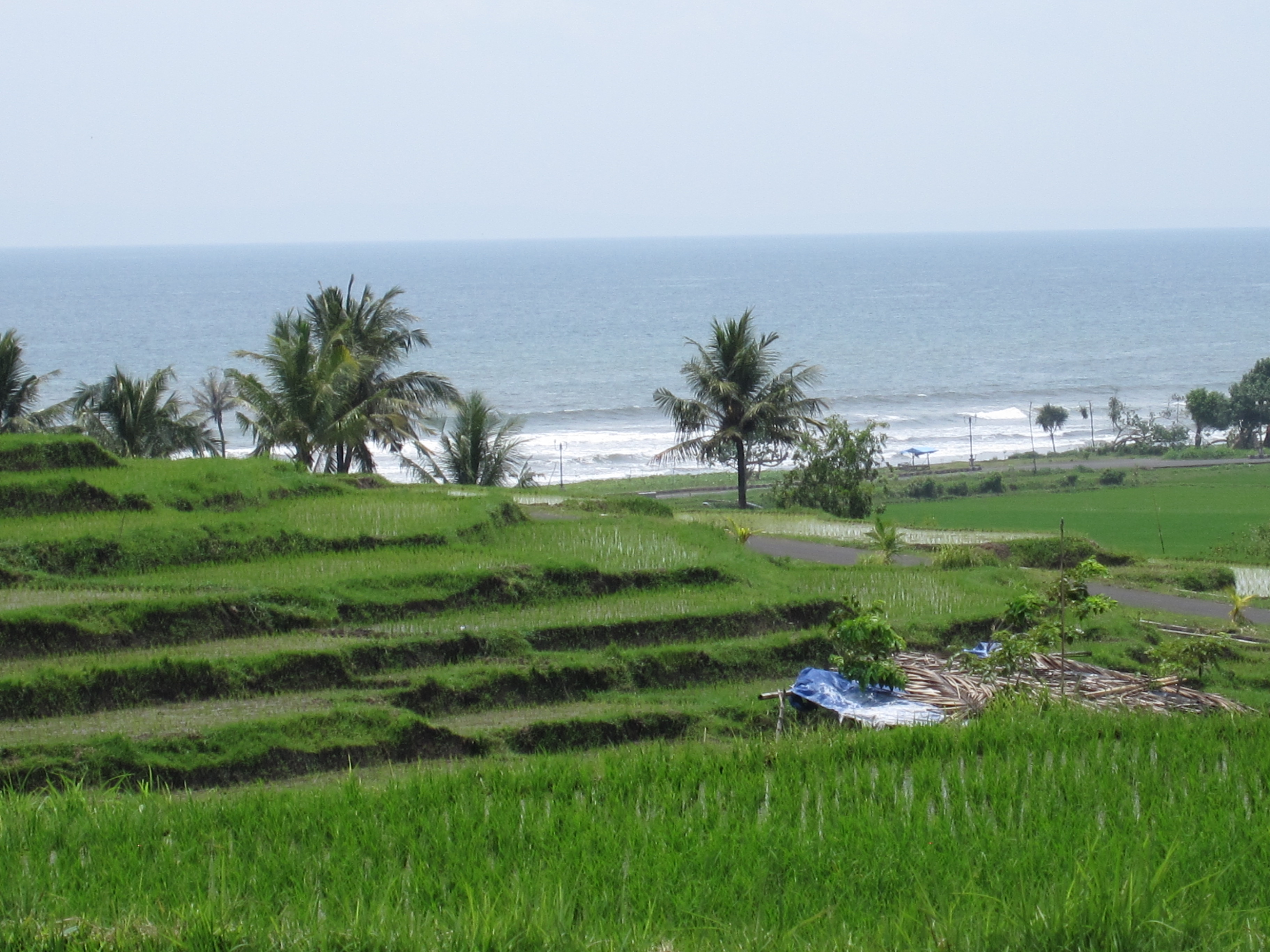 One of the most surprising – yet uplifting and reassuring – lessons the Kiva Fellowship has taught me is something I’d loosely deem “the commonality of the human spirit.” The endless preparation this Fellowship required left me constantly wondering what it would all be like. What would I feel when I met my first client? Would they want to talk to me? Would I be able to connect with them and then, perched over my laptop hours later, could I possibly justify their life story with a 200 word journal entry?

You tell yourself “Expectations” (yes, capital “E”) are a waste of time – and they probably are – but they are unavoidable and natural. I applaud anyone who can avoid making assumptions before doing something new. Coming to Bali I knew that most of the borrowers I would meet lived on less than a couple dollars per day. To be honest, I assumed some of the clients I would meet would be despondent, reluctant to talk about their lives, desperate, even suffering – out of pride.

Even before I got to Indonesia I knew these feelings were my “western expectations” but I feel particularly foolish now that I’ve experienced the reality. These borrowers I meet are perfectly happy and content. Furthermore, I see that they greet each day the same as everyone else in the world, wealthy or impoverished: they wake up in the morning, face the day, and go to work. Of course they are thankful for the loans they receive – which truly can and do change their lives – but there is no tinge of the “anguish” I admittedly prepared myself for.

Many times the pig breeders I meet (you really never forget the smell of your first visit to a pig sty) live in the same community and very often are related or are close friends. To make the whole interview process most efficient for the field officers a number of the borrowers will congregate at a pre-determined home. Every pig breeder I’ve met so far has been a woman and the vast majority took a loan because they decided they wanted to help supplement their husbands’ income.

As the woman wait patiently, the children playing in the background, they gossip and laugh just as the same group of women thousands of miles might do at a the post office or local beauty salon. This is what I mean by the commonality of humans. People are people, no matter where you are or where you come from. They deal with same everyday struggles: making sure there is food on the table, ensuring suitable education for their children, putting some money away for savings (although often for the first time in their lives), even getting the gossip on the neighbors. Perhaps these everyday concerns vary in scale throughout the developed and developing world but I believe the core issues are the same. 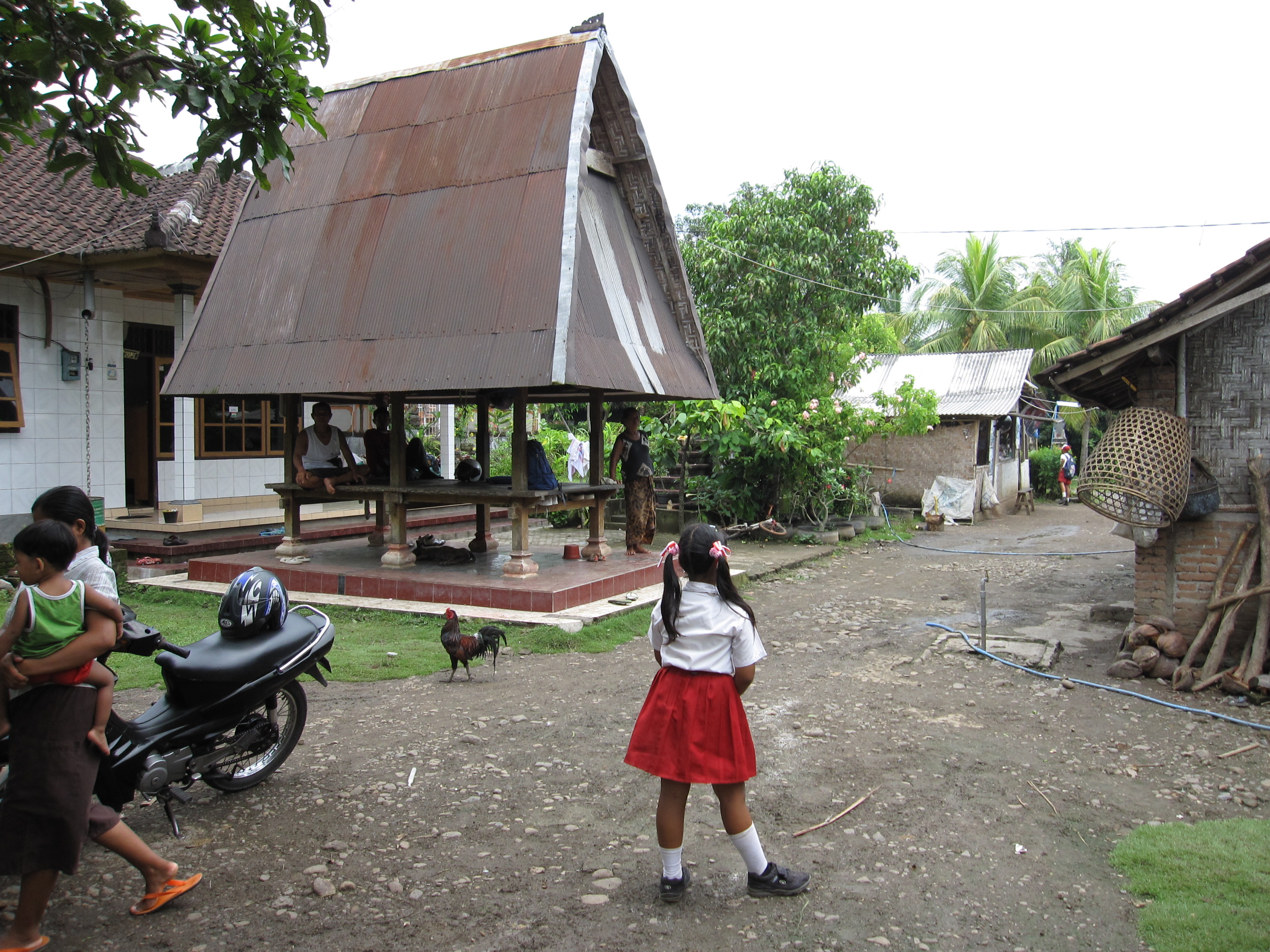 Not only that but the borrowers I met were engaging and for the most part delighted that someone drive out to visit them and ask about their lives. With the interview over and Zeruya politely winds down the conversation, I will ask the borrowers if they would mind if I took a photo. Most happily consent and several have taken me by the hand to lead me out to their pig sty. Embarrassed and slightly incredulous, I’ll anxiously look around for the husband who usually hangs around the periphery during the interviews, and with his tacit nod of approval I’ll let myself be led by these women wherever they were taking me.

It’s been a welcome dose of reality, perhaps even an affirmative slap in the face, for me to see and realize this. My first experiences in Melaya have shown me that the incredibly unjust realities and maddening inconsistencies of poverty do not always negatively affect a person’s outlook on the world. Although I feel in no place to make such sweeping comments, all I can offer is my perspective on what I’ve seen in this one part of the world. I feel a sense of relief in what I’ve witnessed so far and I can say that microfinance does work and truly changes lives. I am embarrassed to admit these were my Expectations – but if I can’t be honest about what I prepared myself for, how can I accurately and objectively evaluate and comment on how very wrong I was?