I first went to Belimbingsari Village for a funeral. The father of two of DINARI Foundation’s staff, Gede Mustika and his sister Yulia, had suffered a stroke and died shortly thereafter. A rented van transported the staff from DINARI’s headquarters, and the mood seemed surprisingly cheerful during the three-hour trip to West Bali. I was reminded of school field trips as people passed around puffed-corn snacks and jokingly reclined their seats into their neighbors’ laps.

At the Christian service, Gede Mustika and Yulia wore white shirts, colorful sarongs and kains, sashes tied at the waist. At times, Yulia wept silently, but Gede Mustika remained solemn and composed. DINARI’s staff referred to him as Pak Gede, a title of respect given when he became manager of DINARI’s branch office in Melaya, the town just south of Belimbingsari.

Pak Gede and Yulia grew up in Belimbingsari, as had three quarters of DINARI’s staff. For many, the funeral trip had been a homecoming. 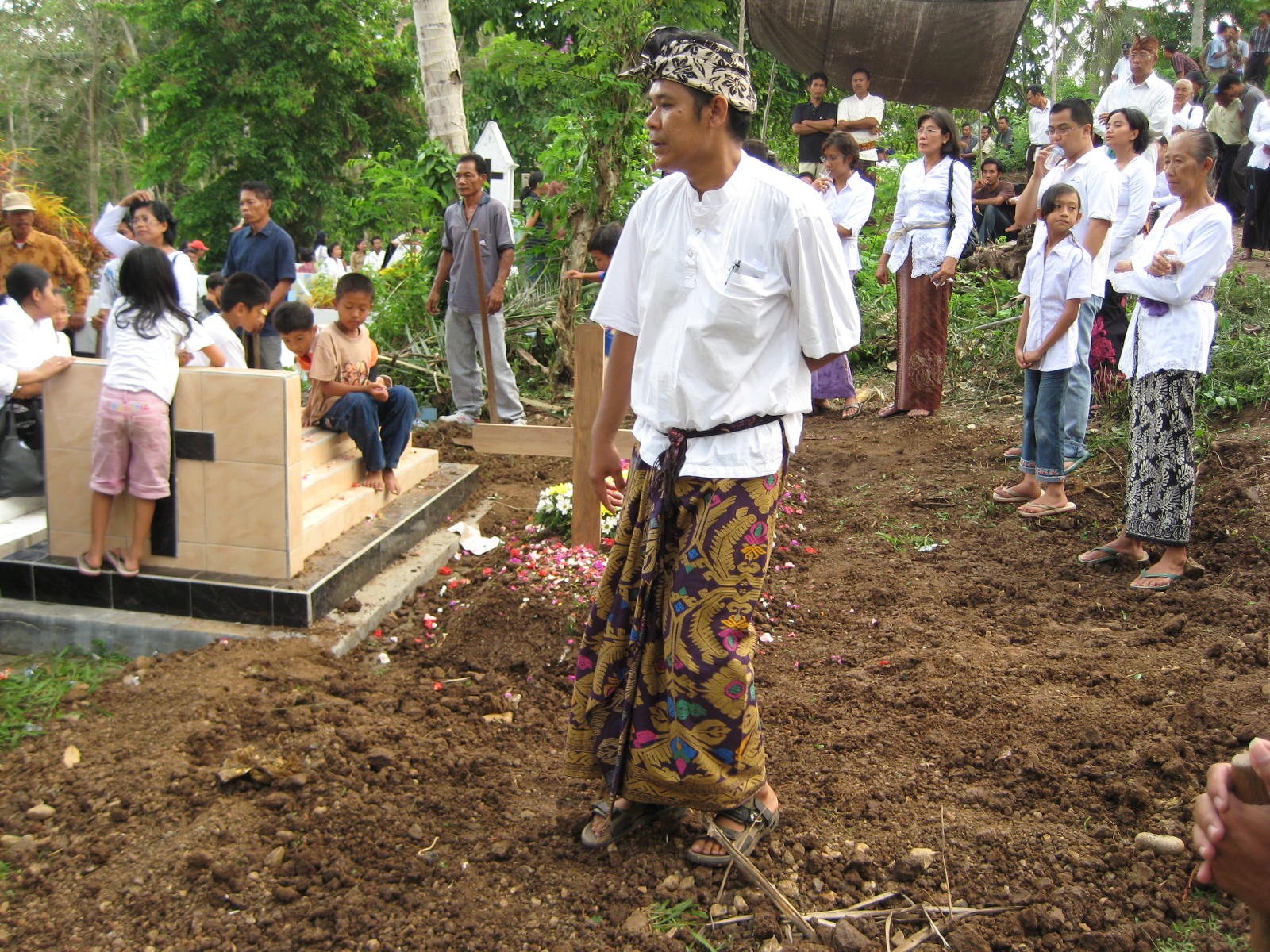 Pak Gede at his father's burial

Belimbingsari is the only exclusively Christian village in Bali. A narrow paved street runs through the community with dirt roads branching off of it. The three hundred inhabitants live in small, well-maintained houses with close-cropped grass lawns in front. The homes are separated by groves of tall coconut trees. People’s dogs roam the street and lie listlessly on the warm asphalt. Seventy years ago, Belimbingsari was a jungle.

In 1939, the Hindu majority in Bali’s capital of Denpasar banished newly converted Christians to the remote wilderness of West Bali. I was told that tigers inhabited the jungle, and it was assumed that the exiles would not survive.

Fifty people settled in Belimbingsari. They cut down trees to make roads and farmland, and they harvested coconuts. They built homes, and the tigers did not attack.

Their children inherited the land and prospered, becoming successful farmers and opening hotels and other businesses around Melaya. This second generation could afford to send their children, including many of DINARI’s staff, to universities in Denpasar and Jakarta. Pak Alit, DINARI’s executive director, told me that his father sent him and all his siblings to university with the income from selling coconuts.

Pak Alit did not return to Belimbingsari after earning his degree as an agricultural engineer. He settled outside of Denpasar where DINARI was founded in 1992. Seven years later, he hired four new employees, including Pak Gede, and opened the Melaya branch to begin offering agricultural loans and technical training to cow and pig breeders.

Before joining DINARI, Pak Gede and many others from Belimbingsari had worked in the tourism industry. Several lost their jobs after the 2002 bombings. Zeruya, now one of the supervisors for DINARI’s loan officers, sold crackers to food stalls from his motorbike before Pak Gede offered him a job in 2005. DINARI’s work in West Bali steadily increased, and the staff grew to twenty as the client base ballooned into the thousands.

Zeruya told me it had been difficult for him when he left his village previously to find work. He was happy to again be close to his parents, and he thought Belimbingsari was a good place to raise his two daughters.

“They can run everywhere,” he said. “Not like in Denpasar.”

But there is no university in Melaya, and he expects his children will obtain their higher education in Bali’s capital.

“There is no choice,” he said. 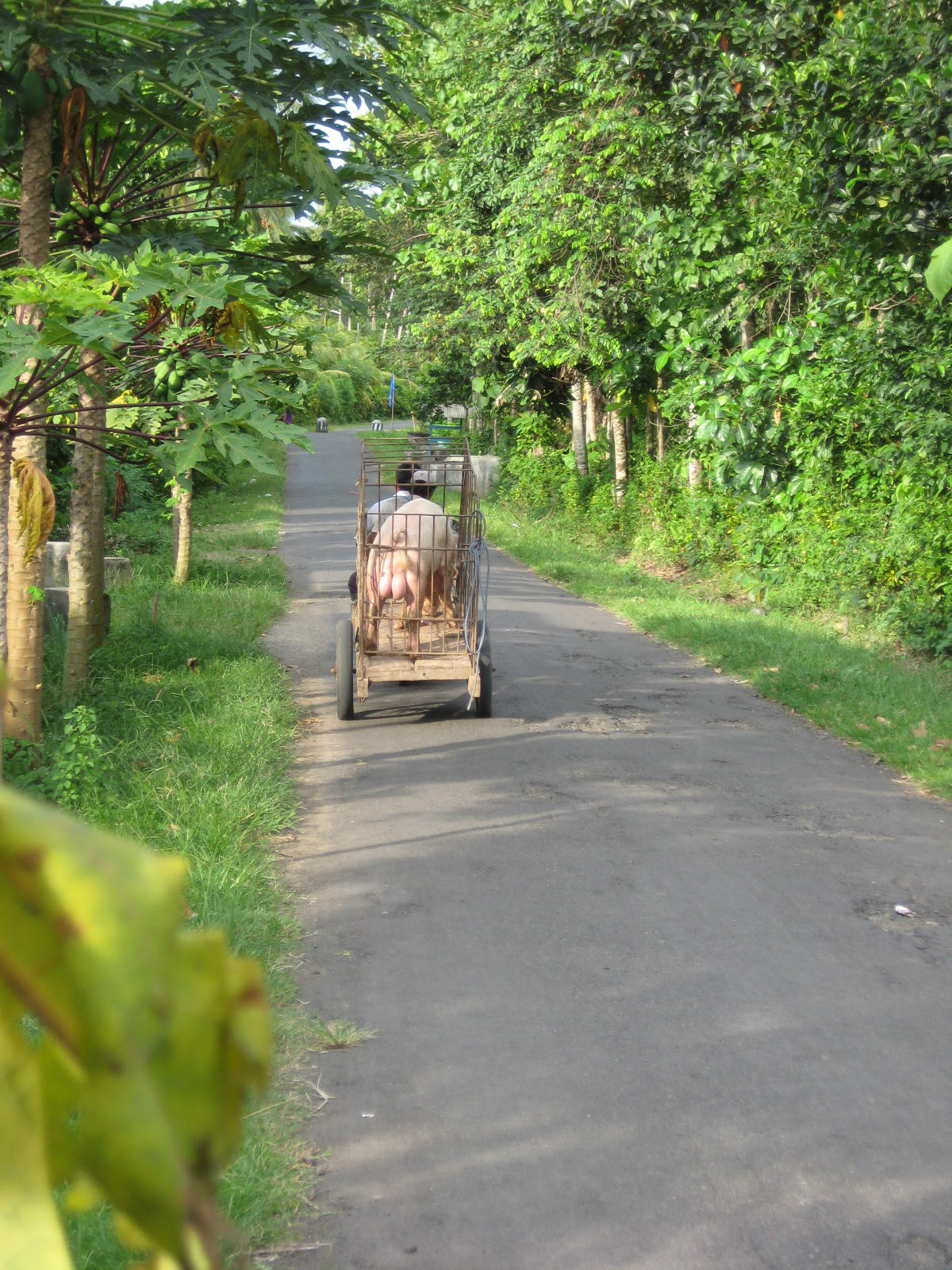 Nearly two months after the funeral, I returned to West Bali to interview DINARI’s clients. In Belimbingsari, I stayed in the guesthouse at DINARI’s Business Development Services Center, where clients received training about animal husbandry and furniture making.

I ate my dinner in Melaya as there were no food stalls in Belimbingsari, and one night I chatted with the couple who ran a restaurant. The husband had grown up in Belimbingsari and initially opened his establishment in the village, but he moved to Melaya to attract more customers.

“There are only old people living there,” he said. “And dogs.” He laughed. “Watch out for the dogs!”

Many of DINARI’s staff in Melaya asked me if I minded staying alone in the guesthouse. Zeruya teased me that he saw strangers lurking there. To me, Belimbingsari felt a bit like a retirement community, but people spoke about it as if it were a ghost town.

I told everyone, sincerely, that I really liked Belimbingsari. The pace was slower. With no other motorbikes in sight, I found myself singing Walking in Memphis during my morning commute. People smiled and waved to me from their lawns. At the guesthouse, mango trees bore fruit as big as footballs. A convenience store owner delighted when I told her my name was Lander, not landung, the Balinese word for “tall.” She invited me to stay at her house for my (theoretical) honeymoon. 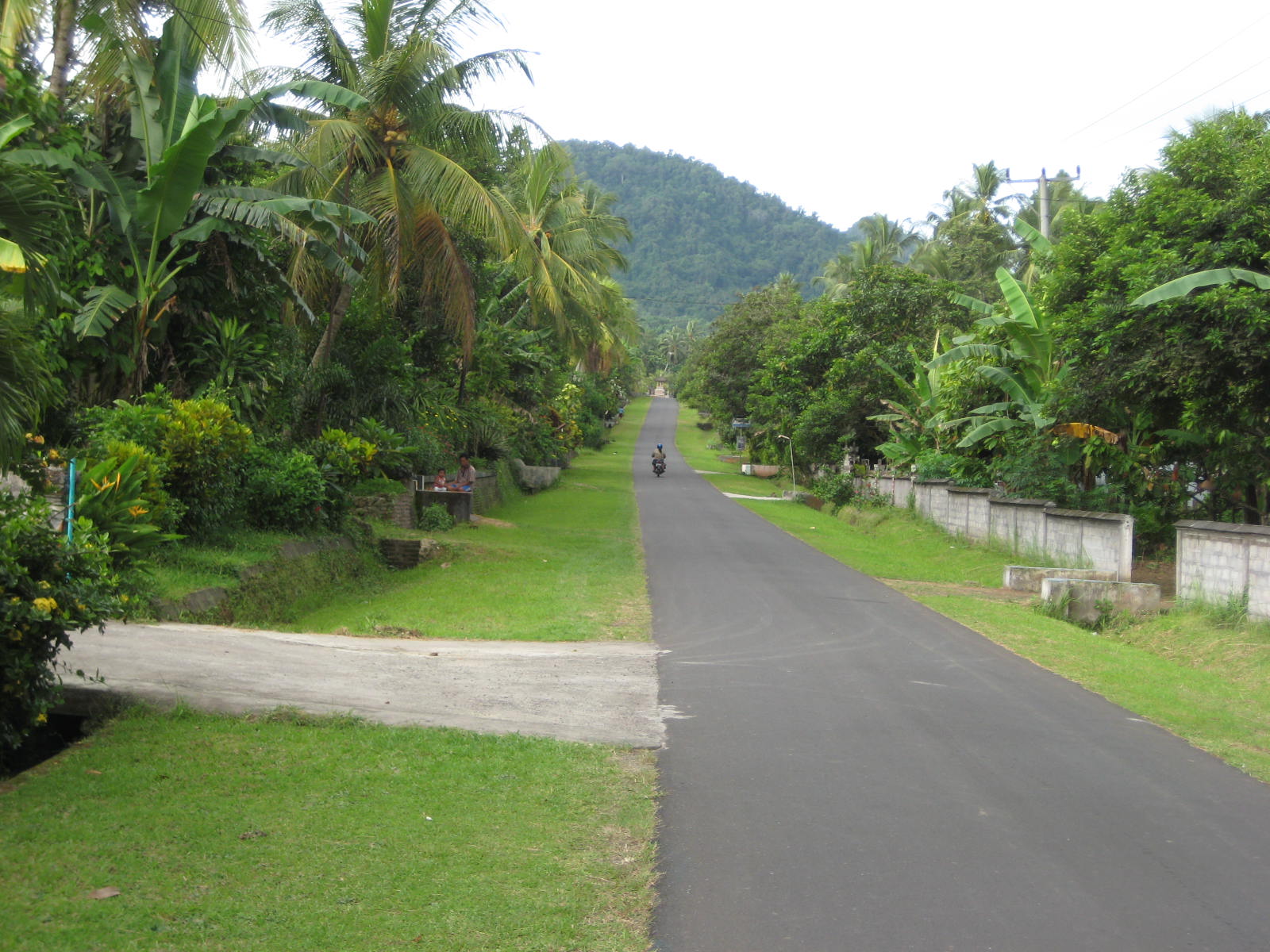 I admittedly did get a little spooked driving back at night. The coconut trees loomed over the road and threw big shadows from the street lights, making me feel like I was in tiger territory. My chest tightened as I passed under the imposing gate being built at the village entrance. 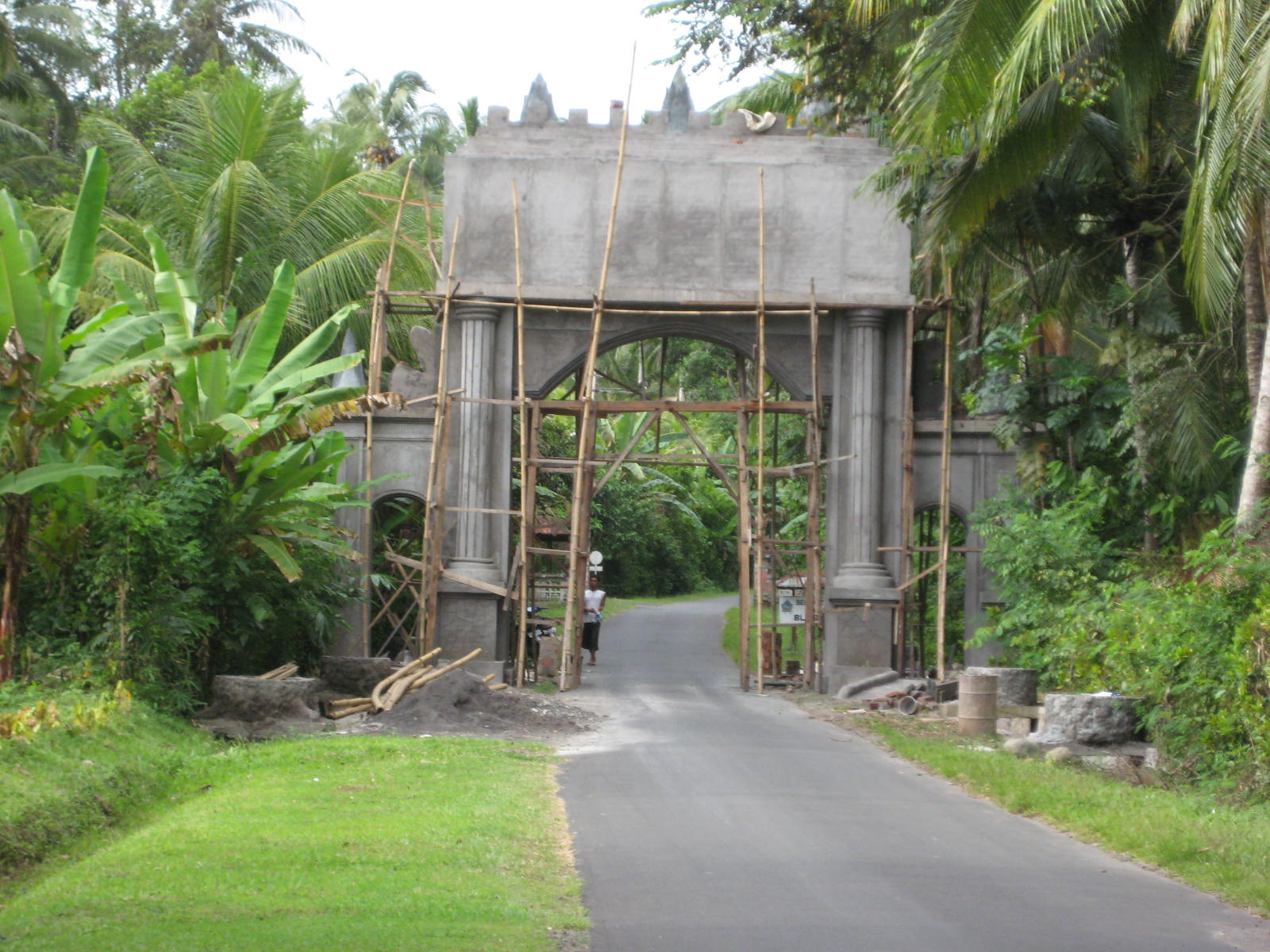 According to Zeruya, all Balinese villages with sufficient funds erected gates to welcome visitors. But this gate appeared to have been lifted from a medieval fortress. In 2000, when riots on the nearby island of Lombok targeted Chinese-Christians, a mob of Muslims gathered outside Belimbingsari, threatening to attack the community. A rice farmer from the village cut down trees to make a blockade near the location of the gate. He then crouched behind another felled log further back, a hundred Molotov cocktails at the ready.

Although Islam is a minority religion in Bali, half of Melaya’s population practiced it. Most came from the island of Java hoping to find work. They boarded ferries and crossed the narrow Bali Strait to the port of Gilimanuk, fifteen kilometers northwest of Melaya. According to the rice farmer, some Muslims resented Christians for their business successes.

The mob at the gate eventually dispersed after Hindus came to protect the villagers. Despite Belimbingsari’s origin, I was told that Hindi people and Christians were now on good terms.

Many of DINARI’s clients were Muslim. They chatted amicably with Zeruya and the other staff members and did not appear resentful in any way. One store owner did seem bitter, but her animosity was directed at her estranged husband, not DINARI. The man had run off with another woman and Rp. 10 million from a government bank loan.

I asked this store owner and other clients about their dreams for the future. When I had posed the same question to borrowers from Denpasar, many of whom were also Muslim, they told me they hoped to move back to Java where they had family and owned land and homes.

The clients in Melaya hesitated at first to answer, but when Zeruya persisted, they responded that they wanted to improve their living situation. If they rented, they hoped to buy a house. If they were already home owners, they wanted to renovate the kitchen, tile the floor or plaster the walls. They had no intention of leaving Bali.

Recently, DINARI entered a partnership with the Indonesian branch of Habitat for Humanity. The two organizations set the ambitious goal of constructing five thousand homes in West Bali over the next five years. 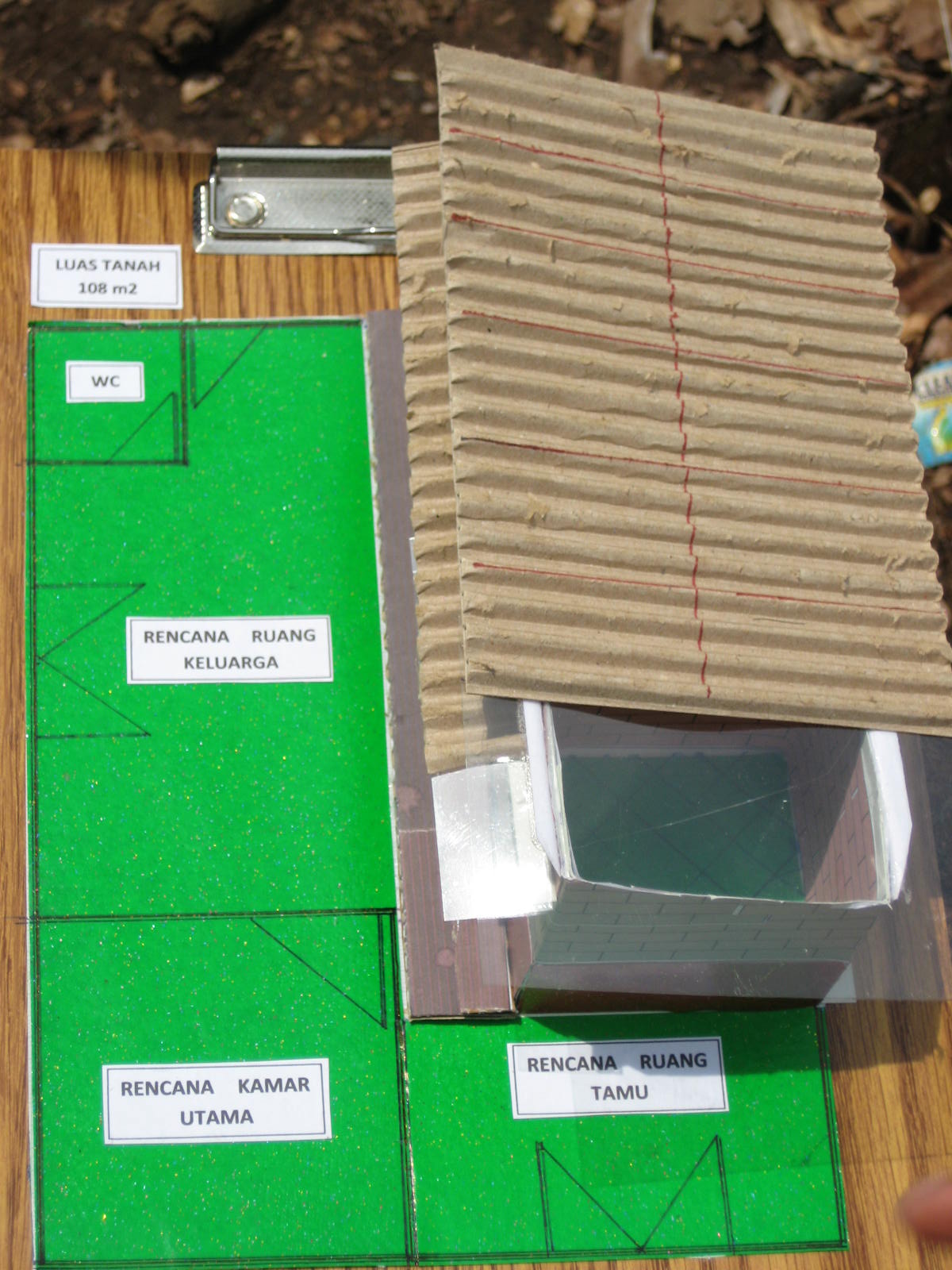 A mockup of the "Growing Home" project

The project is called Rumah Tumbuh, or “Growing Home.” Habitat for Humanity provides no-interest loans to DINARI, which then offers construction financing to existing clients. Initially, borrowers in a community each receive Rp. three million ($250). Using local materials, the people help each other to build “core homes” approximately thirty square meters in size and new outhouses. If a homeowner saves money in the future and qualifies for additional loans, he or she can build out additional rooms. It is hoped that each home will “grow” to 108 square meters, at which point the house can connect to the bathroom. 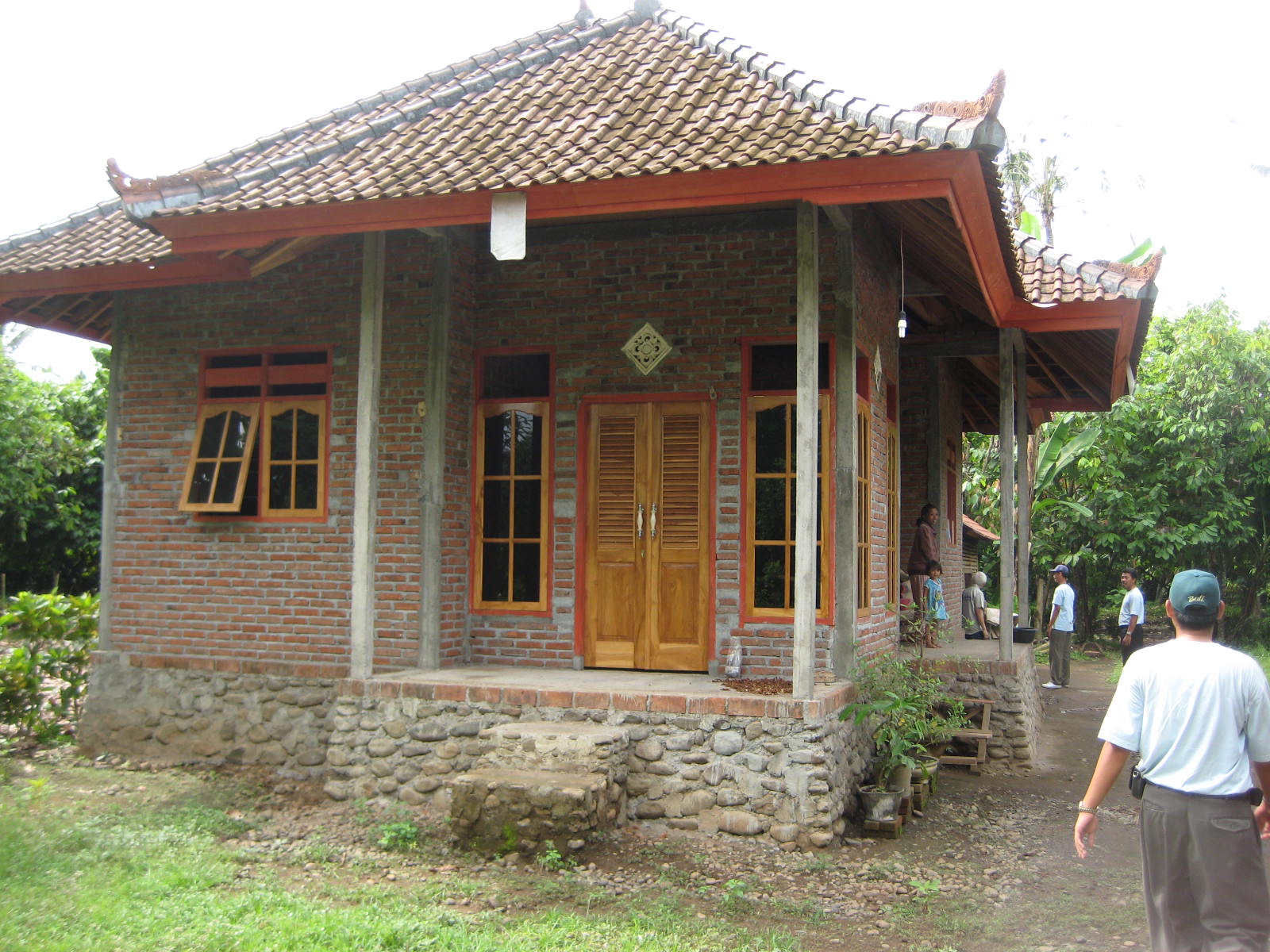 As DINARI helped its clients around Melaya put down roots in their communities, I wondered about the future of Belimbingsari. Zeruya did not seem overly concerned. Many of the staff already owned land in the village and planned to retire there. I was told that the place got hopping during Easter and Christmas, and I was invited to come back for the Christmas Day service.

I plan to tour Bali by motorbike for a few weeks after my Kiva tenure, and hopefully I can plan my route to be in West Bali on Christmas Day. If I arrive the night before and no one is stirring, I plan to gun my Yamahawg under the new gate until the engine growls like a big cat.

Ferdinand, DINARI’s Kiva coordinator and my friend and shepherd in Bali

This is my last post as an active Kiva Fellow. Writing about my experiences has proven one of the most rewarding and enjoyable aspects of my tenure, and I am sincerely grateful to those of you who have read my posts and offered such thoughtful comments. My future is presently unsettled, but I hope that I can continue to have world adventures, find inspiring stories and share them with people like you. I encourage you one more time to watch for new loans from the DINARI Foundation: http://www.kiva.org/app.php?page=businesses&partner_id=82&status=fundRaising&sortBy=New+to+Old&_tpg=fb