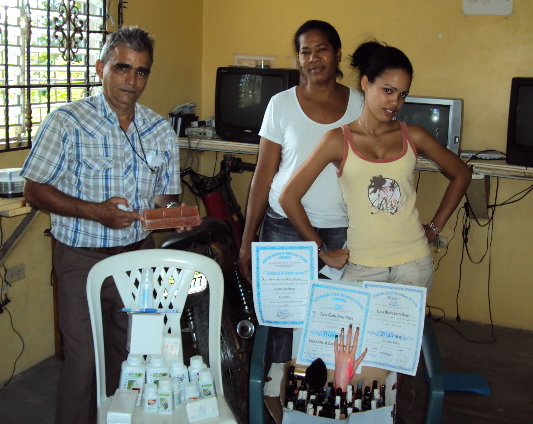 Having spent a lot of time speaking with borrowers during the week, I decided to spend Friday in the office. Kiva Fellows are required to complete an extensive list of ‘deliverables’ and I was aware that I still had a lot to deliver. I had just begun editing a short film when I was approached by Noberto, Esperanza International’s Kiva Coordinator.

“Fancy observing one of Esperanza’s health workers in the field? It’s one of the services we provide and you haven’t seen it yet. I thought you might want to go.”

“Err, yes please. That would be great,” I answered reluctantly, knowing I’d be losing another day of office work to the field. Saturday had just taken Friday’s place.

I jumped into the truck and we set off for a small community about 30km east of Santo Domingo. There I observed the health worker’s opening address but didn’t actually witness any check-ups. Naturally, these were conducted behind closed doors. While I was waiting I got chatting to Luisa, one of the members of the Solidarity Bank.

Luisa had been elected President of the Bank and it wasn’t hard to see why. She came across as smart, driven, proud and ebullient; passionate about her own progress but attentive to the welfare of others. As I quizzed her about life before microloans Luisa answered my questions with a sparkle in her eye, evidently grateful for the benefits that the loans have afforded her community.

“The loans have helped a lot. Before, many people had nothing to do. Now they run their own businesses.”

“The loans have given women a practical way of earning money. We can now run businesses out of our homes.”

Luisa was anxious to talk about what makes her tick – business. She has taken out 3 loans and invested each into a different venture. One run by her, one by her husband and a third by her daughter. I found this pretty impressive, especially considering that she received her first loan less than 18 months earlier.

While the ladies at the Bank were receiving their check-ups, Luisa led me to her house to show me her businesses. When I arrived I was greeted at the door by her husband, Martín, a jovial man who led me in, sat me down and handed me a cup of coffee with a beaming grin. We were then joined by their daughter, Luisa María, a pretty girl of 19 who appeared quiet at first but soon opened up with a radiant smile when we began discussing her business. I knew I was going to like this family.

The photo above portrays Luisa, Martín and Luisa María standing next to their respective businesses.

Luisa’s first loan was used to purchase a computer, modem, printer and photocopier. She noticed that this was something that didn’t exist in her community and that people – especially youngsters – were having to travel a long way to use the internet or print something off. Luisa asked her son to teach her the basics of using a computer and connecting to the internet, and off she went. I enjoyed listening to Luisa talk about how this has helped the community:

“True, people can now chat to their friends over the internet, but it also really helps the children to complete their schoolwork.”

What’s not shown in this photograph is the extent to which this enterprise has grown. Luisa now has two PC’s connected to the internet and four television monitors hooked up to games consoles. An enormous painting of Super Mario on the wall outside beckons children in to play on the Nintendo GameCube. The business has grown significantly over a short period of time but Luisa admits that the profits of the other two businesses have played their part.

The second loan was used to invest in Martín’s business, the resale of Amway (health and beauty) products. A few of these are positioned on the chair in front of Martín in the photo. As Martín described the relative benefits of his product suite in fine detail, I was impressed by how much he had learnt. He really knew his stuff. I was quite surprised that people would pay the hefty asking price but, as he showed me his ample client list, I understood either that Martín was a very good salesman or that his customers saw great benefit in the products on offer. After speaking to a couple of Martín’s customers, I actually think it was a bit of both.

Luisa’s third loan was used to set up her daughter’s fingernail design business. This comprised of manicure, faux fingernails and nail polish design. Luisa María brimmed with pride and passion as she spoke about her art, and art it was. I could not believe the elaborate intricacy of the designs on offer. I was so impressed that I asked (as a joke!) whether she’d add me to her waiting list. “Ha ha, can you imagine! That would just be embarrassing!” was her laconic reply. Luisa María had to complete a 4-month course to become qualified in fingernail design, and her certificates can be seen behind the nail varnishes in the photograph.

So what of the future? Well, the family were enthusiastic about continuing to expand their businesses and Luisa said she would be taking out a fourth loan to pay for repairs on their roof. I asked Luisa about her long-term aspirations. Her reply was one that I hadn’t yet heard from any of the borrowers I’d met previously:

“I want to buy a vehicle so that we can travel around the country. There’s so much I want to see.”

“And do you think that you’ll achieve this dream?” I asked.

“Of course!” she responded confidently. I don’t doubt it one bit.

So far, my experience in the DR has shown me that microfinance has its limitations. It’s not always a perfect solution and I often see cases where microloans simply help people to sustain, as opposed to grow, their businesses (which is much better than having no business at all!). But Luisa’s story is one of unbridled success. The loans have allowed her family to found and grow not one but three businesses at a startling rate. And what’s more,  Luisa, Luisa María and Martín all love what they do. They talk about their businesses with an infectious pride. I too left their house feeling very proud, proud to be working for an organisation that can effect such positive change.

After a couple of hours we headed back to the office in San Pedro. As we motored along through the dusty sun I sat gazing out of the window, brimming with a smile that remained painted on my face throughout the weekend.

By Nick Hamilton, KF13. Nick is serving as a Kiva Fellow with Esperanza International in the Dominican Republic and Haiti

Want to become a member of ‘Team Esperanza – DR and Haiti’? Click here.