A Ride with Robin Hood: portrait of a loan officer

Ebert is waiting for me at 7 am as promised, crouched by his motorbike, his hoodie cinched, looking like a benevolent bandit.  He hands me a helmet, I mount the bike behind him, and we're off to visit Avelino Perez, coffee farmer, way outside Pucará, Peru, as part of my borrower verification.  We stop once for gas and again when the bike stalls three times and won't start.
"I told the boss this bike had problems," he grumbles, shaking his head.  He has a singsong way of talking that makes even complaints sound cheerful. 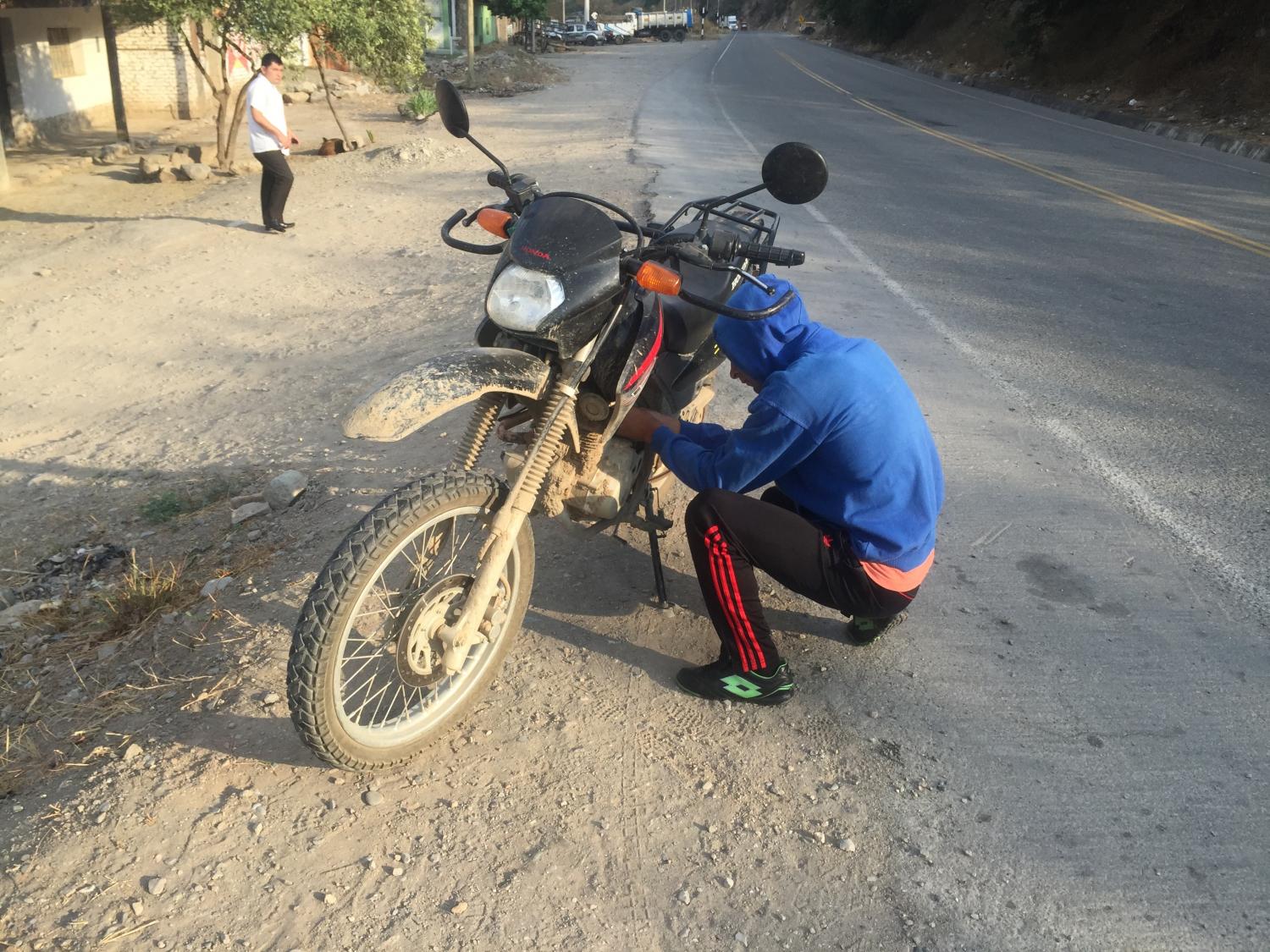 A little engine trouble won't stop us
A wiry guy of 28, with pinched grey eyes, a mess of short hair, and so close-shaven I get razor burn looking at him, Ebert is a man of quick and constant movements.  In less than a minute he's breaking off a piece of wire from a sign to fix the bike with, and soon he's contorted it to prop the choke open.  Amazingly, the bike starts.
After twenty minutes we turn off the highway onto dirt roads that get steeper, windier, narrower, and rougher for the next three hours.
We ride through a series of villages where people wave as if we're celebrities, and we have to stop repeatedly so someone can rush up and ask Ebert for advice, or offer a gift.
"Faster?" he asks as we get into the really steep stuff.
"No!" I shout over the engine.  "This is a good pace."  At some points we're so close to the edge of the mountain I get a little dizzy, and we're dodging and bouncing over rocks so hard it's all I can do not to fall off.  Ebert rides like he's on the run.
We power through a couple streams, but eventually one is too big, and I have to dismount while Ebert walks the bike across.  I notice him clenching and unclenching his fists, and I'm embarrassed to realize I've been thinking only of my own discomfort.
"Tired?" I ask.
"Just the hands," he smiles through clenched teeth. 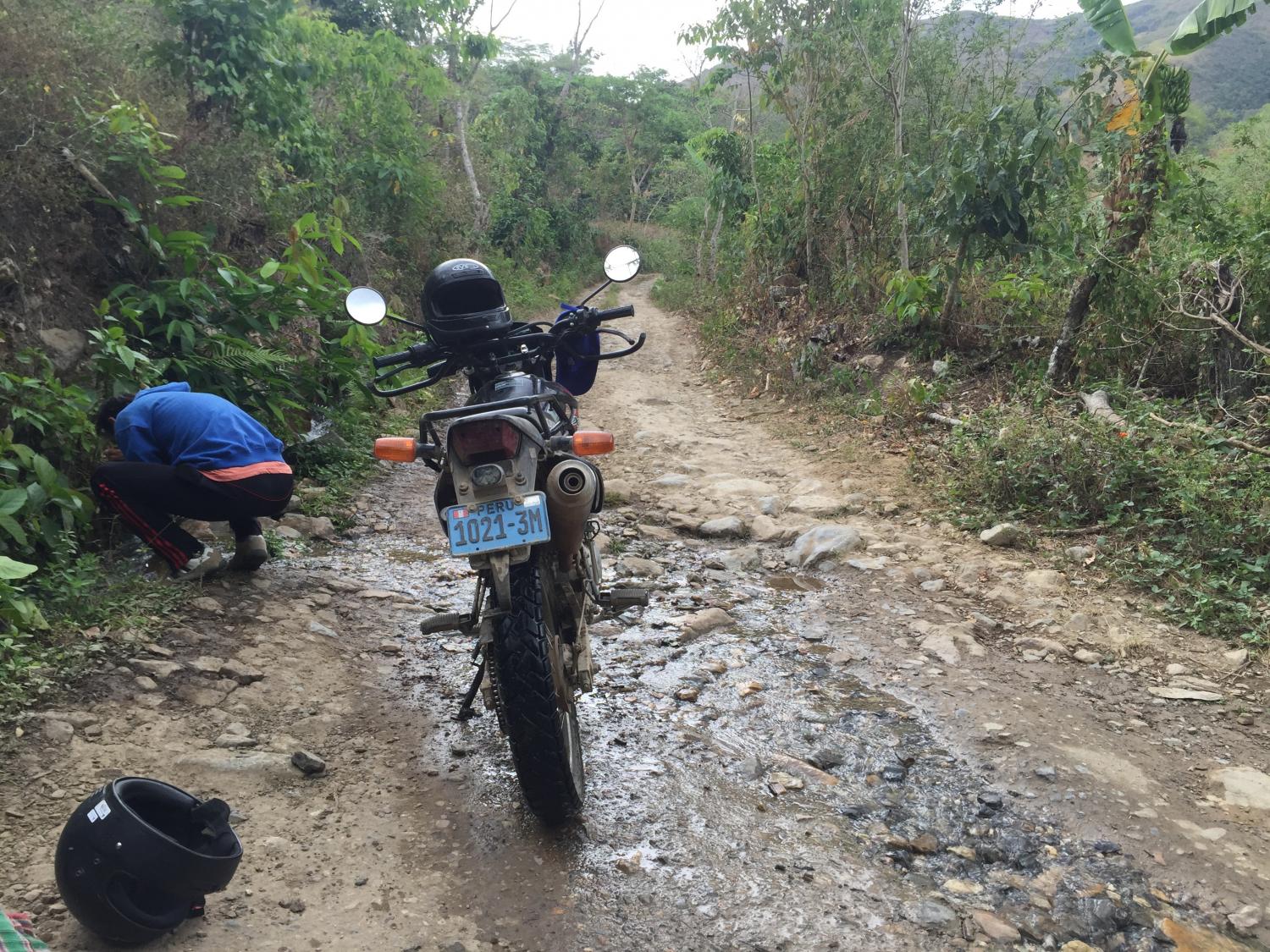 Water break
As we get close to Avelino's house the road all but disappears, and the going gets so steep the bike can barely make it.  Before I know what's happened I'm pinned underneath the bike and Ebert is sprawled on the ground in front of me.  He's beside himself, grabbing and pulling me up before checking himself or the bike, which has a broken mirror.
"I've hurt you!" he says, stricken, as if I'm royalty.
"No, I think it's all right.  I'm not even bleeding."
"Are you sure?"
"Yeah, just a bruised elbow.  What about you?"
"My knee…." he says, pulling up his pant leg to reveal more than a little bleeding, and dirt in the wound.
"Here, use this," I say, handing him some toilet paper.  "But make sure you wash that with water when we get to another stream."
"I've never fallen before," he says, shaken. 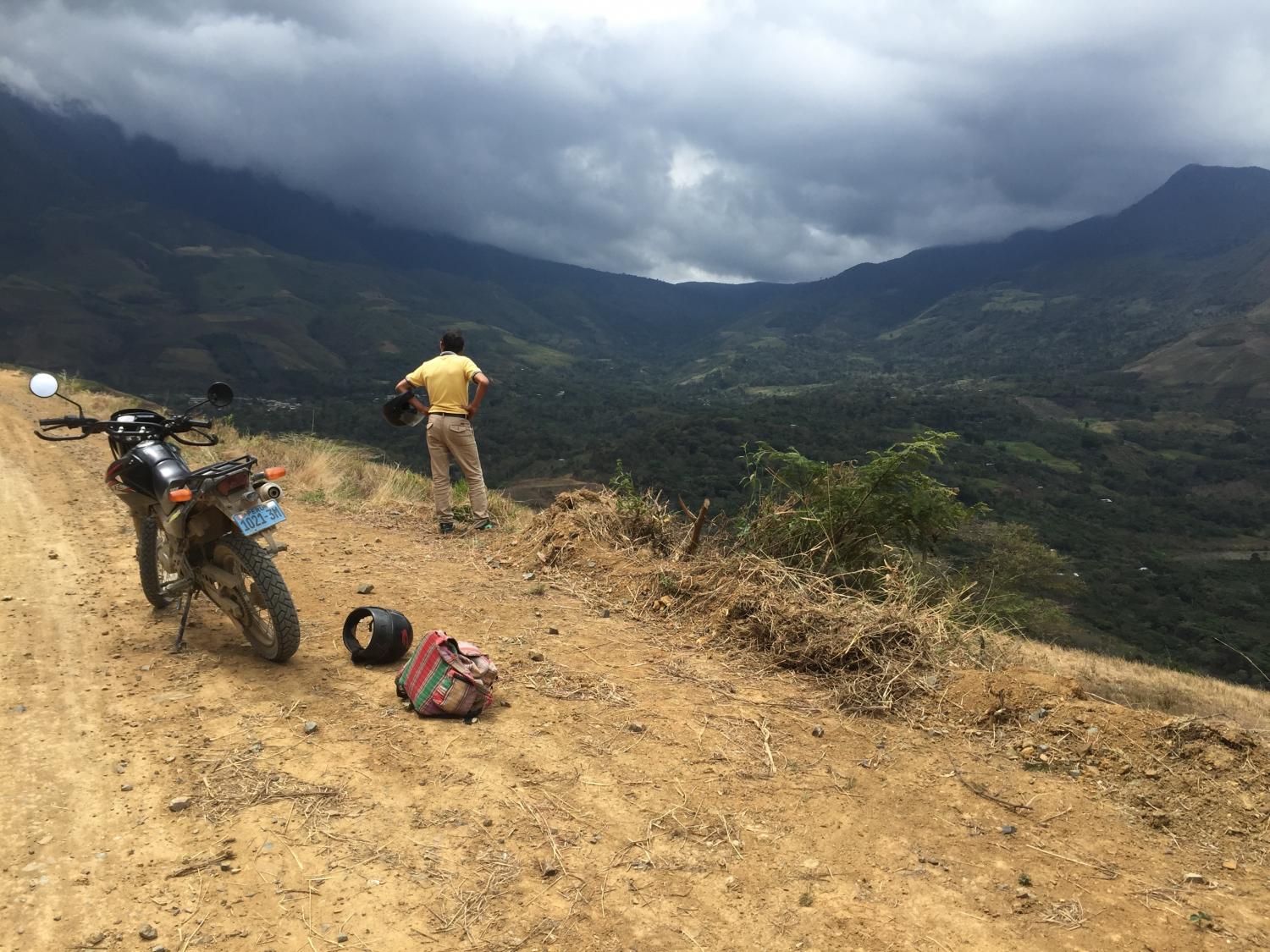 Chasing poverty to the ends of the earth
Ebert studied agricultural engineering, so he's even more eager than Avelino to explain the workings of the coffee farm, prompting a lively discussion about heritage vs. hybrid strains of plants, the benefits of mulch, the productivity of old plants vs. young, why hired workers don't harvest properly, and the importance of optimal seedling spacing. 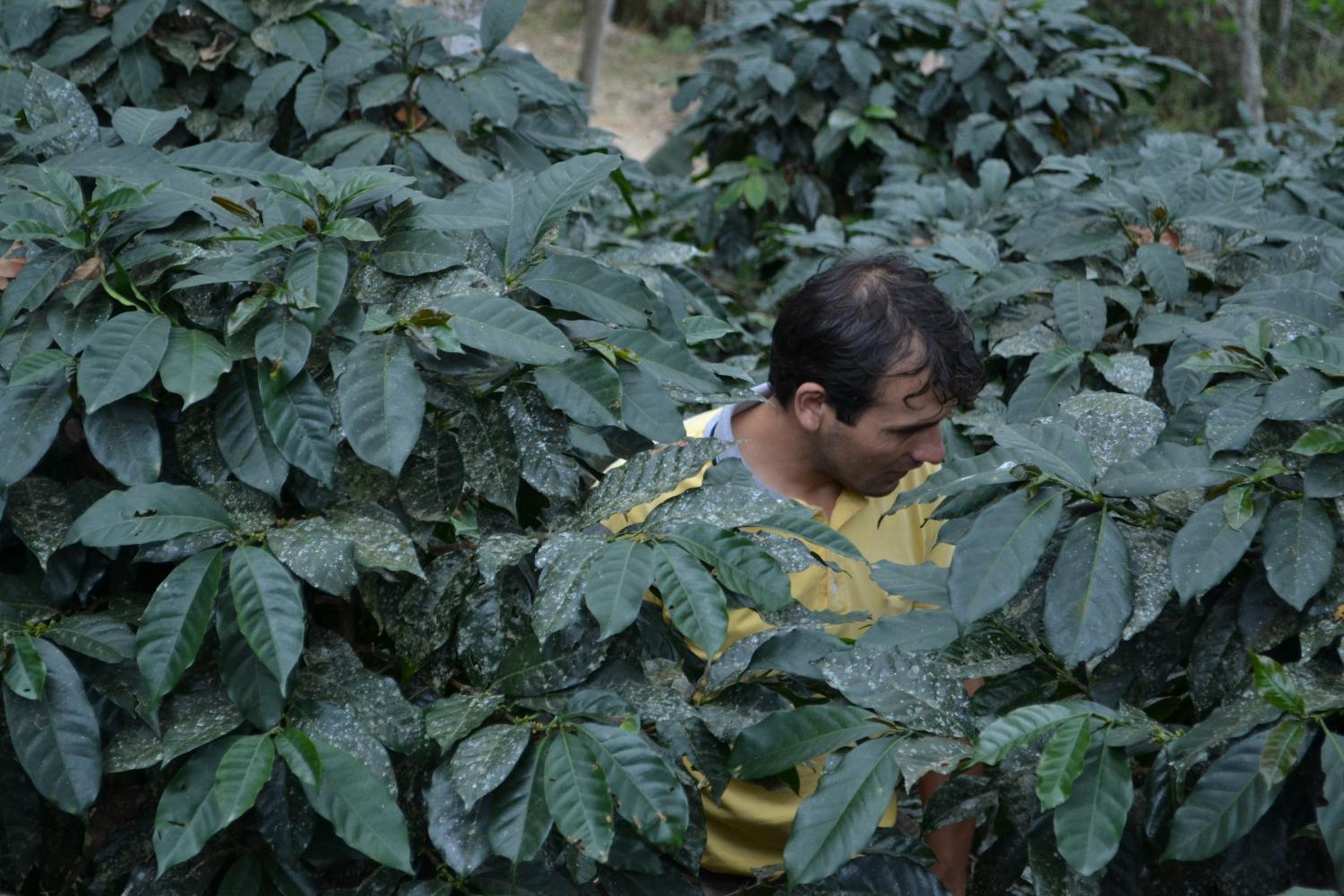 Sherwood Forest?
When I pose the standard question about how the borrower would rate the local partner, Avelino waxes rhapsodic.
"This guy does a great job.  I never really thought about what to do with a loan, but he came out to visit, and he was so polite, and he explained all the benefits, and I saw that this is how we Peruvians can advance.  'How can you improve your farm without capital?' he asked, and he was right.  Now my plants are doing so well all my neighbors want loans too." 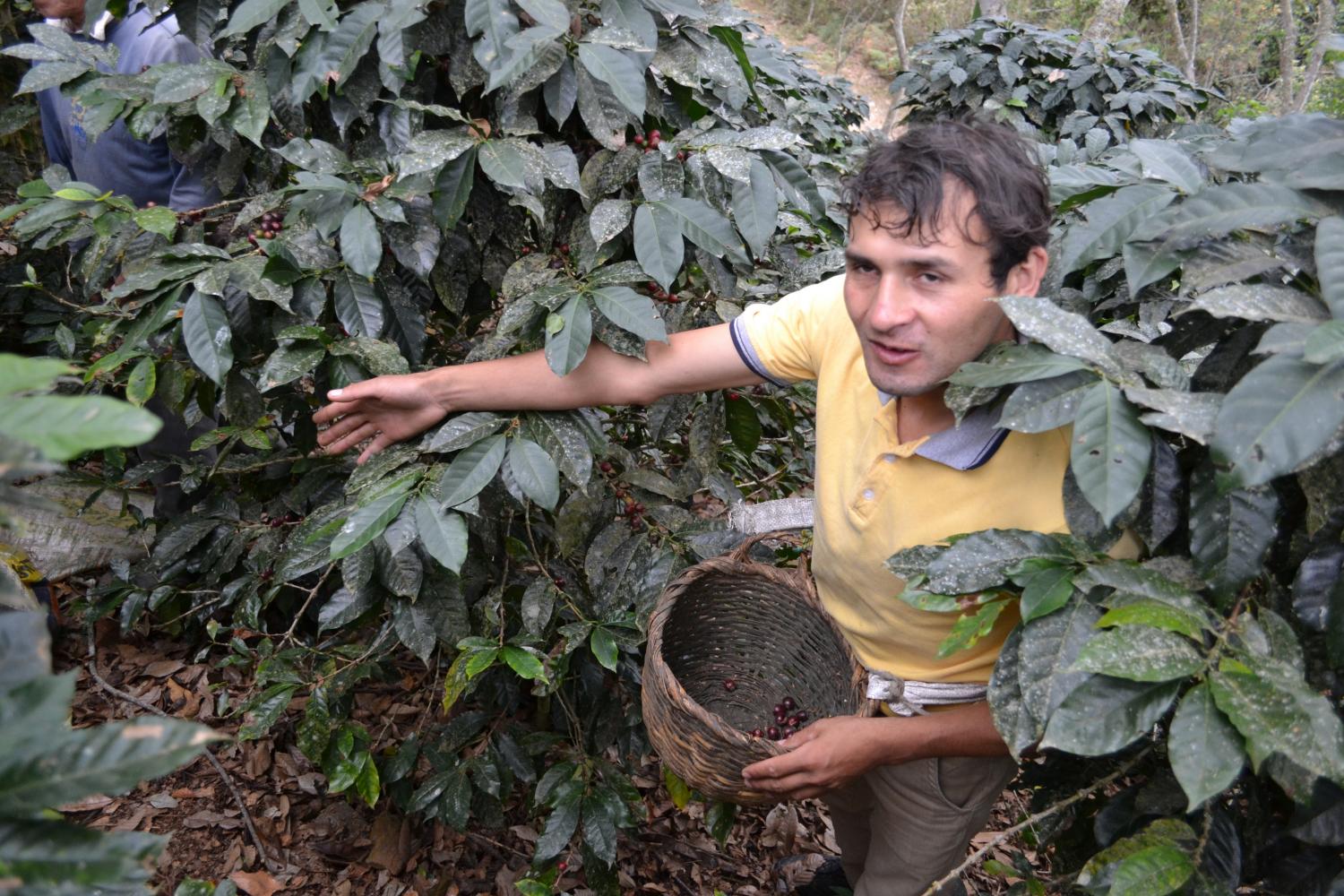 Ebert demonstrating optimal harvesting technique
"What if the borrower defaults?" I ask Ebert after we bid farewell to Avelino.
He shakes his head, smiling.  "They never default."
"How can that be?"
"I take care of my borrowers.  If I hear one's in trouble, I call him, or visit him, and we work something out.  Maybe he needs more time, or a different payment schedule, or a smaller loan.  Or maybe someone in the family is sick, and I can help them get to a doctor."
"But surely there must be impossible cases. . ."
He shakes his head again.  "I don't let a client take out a loan unless I know it's right for him.  I talk to him, talk to his neighbors, get to know his whole situation."

Photo break
On the way home Ebert regains his fearlessness.  Riding downhill is worse, because we go faster, and I keep sliding forward and getting horrendous wedgies.  Near the bottom we stop for crackers and Cokes at a tiny shop where the old lady can't believe our refusal of chairs.  Ebert is hobbling, almost as stiff as me.  He chats with the lady about cable TV service, the route back to the highway, the weather, the state of her business and the world.
"Is she your client?" I ask as we're getting back on the bike.
"No," he says.  "Just a good person."
Macadam feels so luxurious after hours of dirt that I dare to let go of the bike and snap some photos. 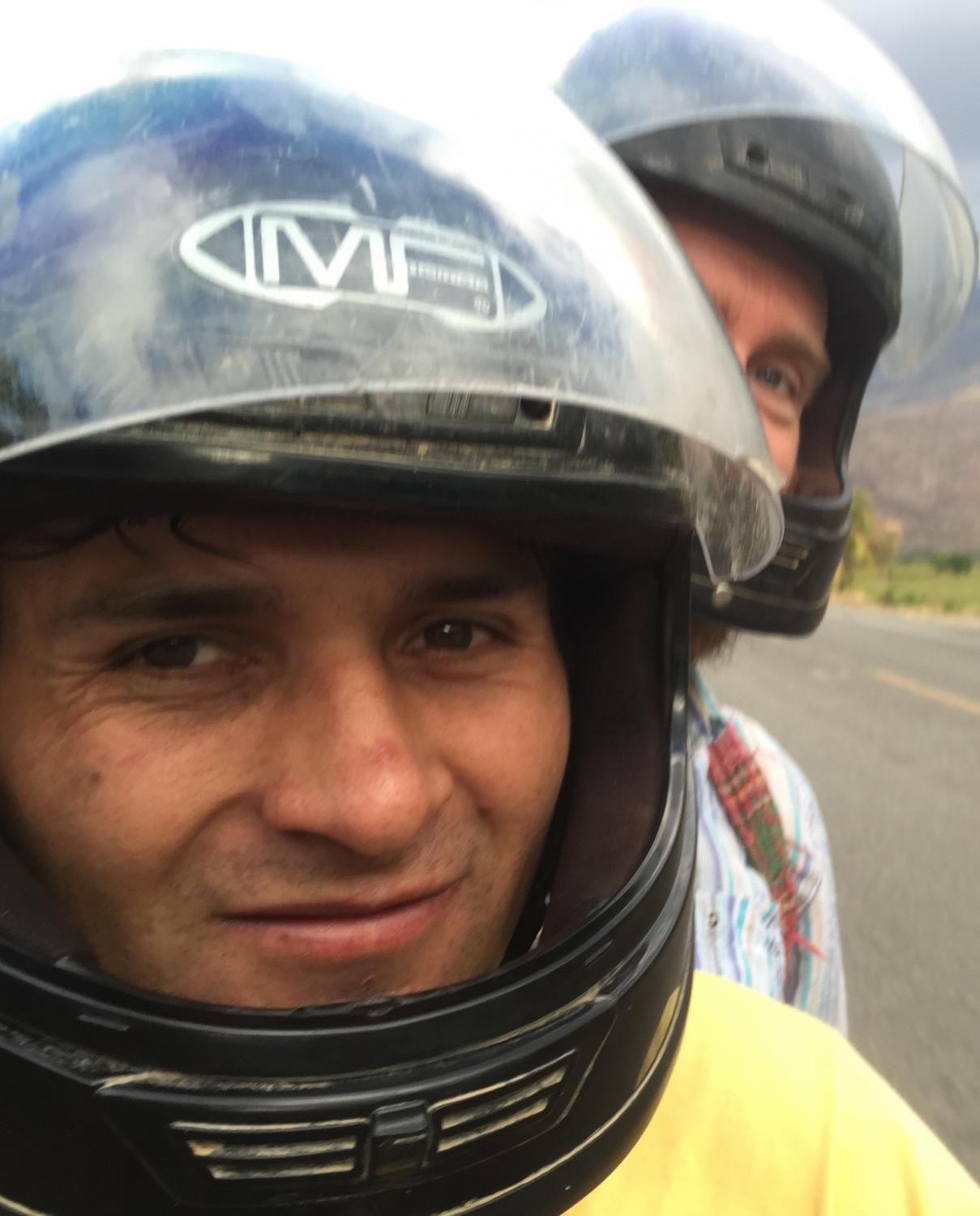 Merry Men
It's getting dark by the time we reach Pucará, and Ebert drives straight to his favorite restaurant--someone's house, really--where a jug of iced barley water and two plates of chicken and rice seem like the best things in the world.
My butt is numb, my left ankle has locked up, my fingers are blistered from gripping the luggage rack, I'm walking like a cowboy, and I have to lean on the arms of the chair to sit down.
"Long ride, eh?" Ebert says, as I lower myself, wincing, into the chair.
"You do this every day?" I marvel.
"Usually I'm in the office in the morning, visiting clients in the afternoon.  It's the same for all the loan officers."
"I admire you guys.  I don't think I could do this every day."
"I love this job--especially visiting clients.  Sure, the rides get a little long sometimes, and it's not so fun in the rainy season, but it's always good to get out and talk to people, learn more about them, see if you can help them somehow."
"You're like Robin Hood, riding around on a motorcycle handing out money to poor people."
"Like this?" he says, pulling his hood up and darting his eyes around. 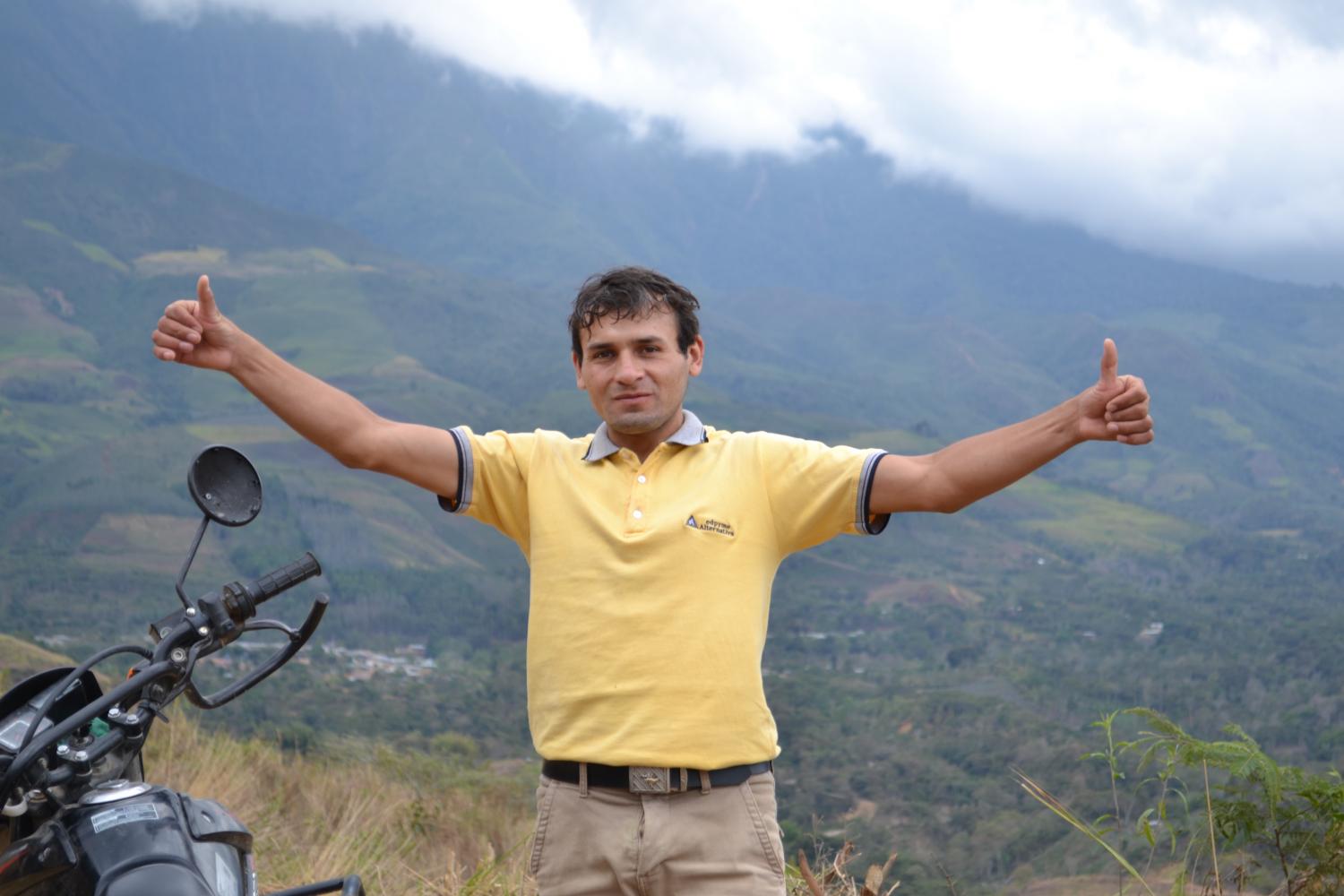 We wolf down the food, and as I'm debating whether or not I should offer to buy Ebert a beer, he lays down his knife and fork, wipes his mouth, and says, "Same time tomorrow, then?"
"Can we make it 8:00?" I suggest timidly.
"As you say, friend," he smiles, and stands up, hand extended.  "Until then."
In a flash of the roaring motor he's gone.

You can say "thanks" to Ebert and other hard-working loan officers, the unsung heroes of microfinance, by making a Kiva loan of your own at http://www.kiva.org.
To support the microfinance organization where Ebert and I are working (Edpyme Alternativa, Chiclayo, Peru), click here. 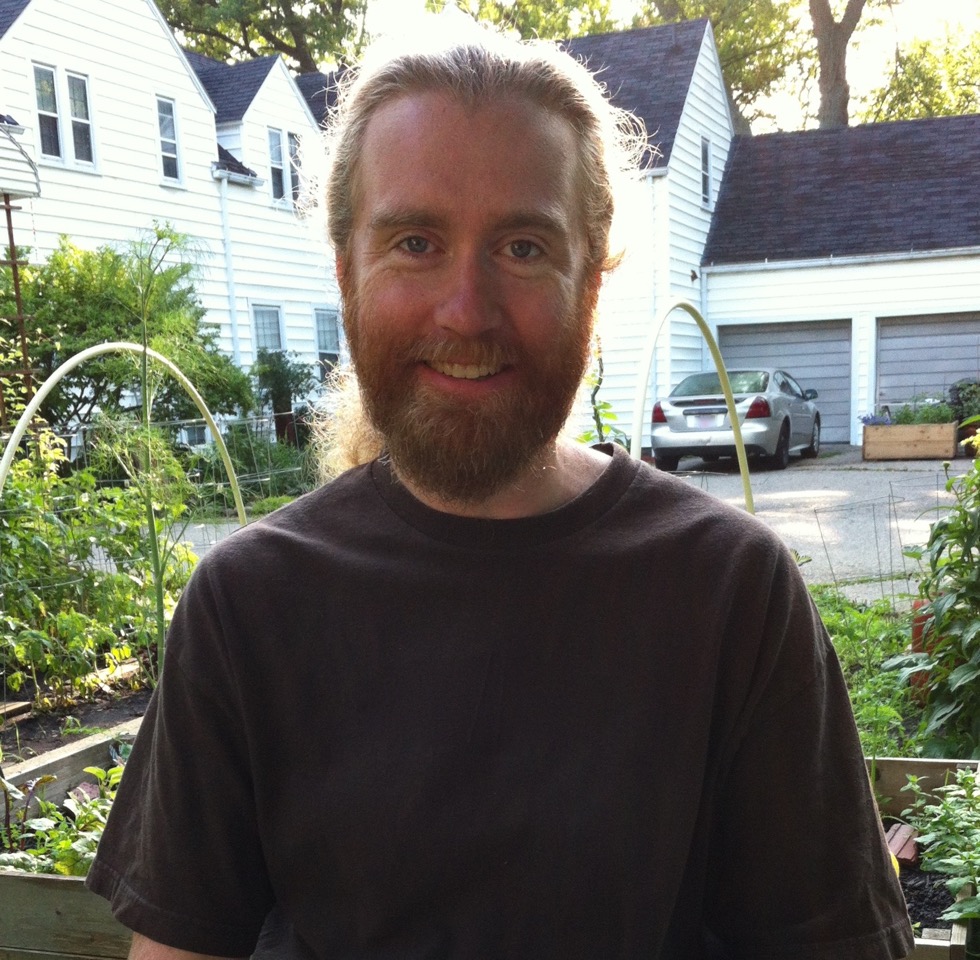 Originally from New Jersey, Gordon earned a BA in English and Music from Swarthmore College. During two summers with the Forest Service, neither Latin nor French helped him communicate with Mexican sheepherders. Over the next several years he learned Spanish by traveling and studying in Latin America while completing an MFA in creative writing from the University of Florida. After teaching in Chile, he landed at Cranbrook, a boarding school outside Detroit, where he has taught English, led wilderness expeditions, coached Forensics, advised the literary magazine, and worked in the dorm. Thanks to summer vacations, he's visited more than 50 countries, including volunteering at ASSET The Gambia and the Tshume school, South Africa. A Kiva lender almost from day one, he's thrilled to get deeper into microfinance.