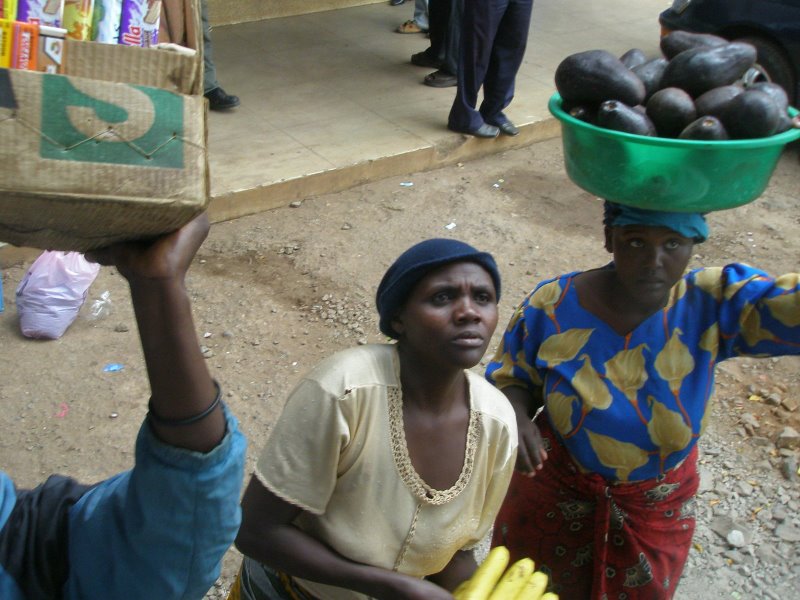 After my first day interacting with Kiva borrowers I was exhausted but exhilarated. It was slow work, waiting while the money for the loans was counted out and matched with each client’s loan record booklet, paperwork was filled out, treasurer and secretary books were gathered. Outside the Tujijenge branch office in the heart of Dar es Salaam, Tanzania, members of loan groups languished in the sun, clothes bright against the dusty ground. I glanced out of the window from time to time to watch them and try to guess what each group had named itself.

At Tujijenge Tanzania, most of the loans are given to groups. Each group consists of 15-40 members, who are split into sub-groups of 5-7, whose members act as guarantors of each others loans. For many poor borrowers, the group’s guarantee is the only collateral they can offer. The social pressure from the group is a major deterrent to delinquency and default, along with the hope for future loans. After a group is approved by Tujijenge, they have one month of business and microfinance training by loan officers. At this time, their information and photos are collected, they elect group leaders, a secretary, and treasurer, and they get to choose a name. Many of them convey a sense of national pride (like “Kilimanjaro” or “Mungu Ibariki Tanzania”–God bless Tanzania), but as you can imagine, these names go fast. So there are also groups like “red rose,” “lion,” and “peace.” Soon, even names like these are gone. So groups pop up named “flag” or “Bob Marley” or “Ferarri”. One of my favorite groups was called “Parachichi,” which means “avocado” in Kiswahili. I loved this little bit of trivia so much that I included it in the business profile for the group on Kiva.org. The other group we worked with that day called itself “Sigara.” I didn’t have time to ask what this meant, but leaving work that day I asked a friend. “Ah, yes, sigara! It means ‘cigarette.’” I recalled my interview with the elected leader of Sigara group, a tall and slender woman with large eyes who held her child in the lap of her green dress as she told me about her shop, her monthly profits, her hours, and saving for her children’s education. I wondered if it was her idea to name the group ‘Cigarette.’

I remember laughing the first time I heard a pop song on the radio with the refrain “Malaria, malaria, ohhh, malaria.” The grim, the dirty, the ordinary, seemed out of place in a hit song, just as the name “cigarette” seems such an odd choice for a group of entrepreneurs using enterprise as a way out of poverty. But what I am learning daily is that it is in our greatest pursuits that the rough-and-tumble of daily life is most relevant. The abstractions I want to paint in broad strokes across life and work in Tanzania would whitewash away the raw, rich, bursting colors, textures, smells, and truths of this place. The ordinary avocado, the cigarette… why should I disdain them? And why should I laugh to hear a pop song about Malaria?

For the first week of my time here in Dar es Salaam, I went through culture-shock lite. At first, I felt like I had finally come home. Back to the country that had carved a place in my heart when I volunteered in Bagamoyo, Tanzania in 2007 as an undergraduate. Then came the ache and pang of realizing that Dar es Salaam is not Bagamoyo, a sleepy historical beach town with one paved road. It is not where I will spend days with children curled in my lap or twisting my hair. It is not where I will go to the beach every day for two hours of swimming. It is where I will work and study and jam myself into buses and choke on dust and smoke, and sweat it out with no ocean breeze. I began to notice faces in the crowds around me that looked familiar. That one looks like Omari. That one looks like Sophie. That one looks like Abduri, Yona, Warda… The beauties of Bagamoyo, my students, my children, but grown up and hardened, selling water for 20 cents a bottle between speeding buses that have no regard for life or trudging down the highway with one hundred pounds of grain on his shoulders, or digging a ditch, or even waiting outside at Tujijenge for 2 hours to receive a 50 dollar loan to buy some more cassava for a small vegetable stand. Even this was not the dream I had for those children. And I saw their faces everywhere.

I didn’t want to admit it, I don’t want to still, but I wasn’t prepared for the sadness that settled around my shoulders and in the pit of my stomach like a stone. I know microfinance is only one tool out of many to alleviate poverty. I know it is a slow-rolling stone. I know development itself is incremental and unwieldy. But isn’t it easy to desire passionately a better world right now? Who suffers from a fever and relaxes knowing it will break eventually? Who looks at an open wound and doesn’t want it closed immediately? But not only did I balk at the idea of slow change… I looked around and didn’t see potential for any change at all. And it had to get worse before it could get any better.

After my third day at work, I came down with an extremely high fever. The next day I went to the small clinic near our house and it was confirmed. Malaria. And not just one malaria, they told me. “Two Malaria”. “I don’t understand.” “You have two malaria. Two parasites.” I struggled to understand. Finally, I got it. Not one, but two strains of malaria. At once. Just my luck. Last week passed in a haze of fevers and chills, exhaustion, tears, rants, swallowing pills, rejecting food, and, most of all, sleeping. I have never felt so completely incapable of movement. Every muscle in my body refused to move. I would stare at a glass of water a foot away and not be able to convince my hand to reach for it. I am ashamed, but I wanted to give up. I wanted to pack my things, take a taxi to the airport, and just go home.

But I didn’t. And now I’m better. I wake up to the sound of the dawn call to prayer. I ride the buses to work with children going to school in their uniforms, and people going to work. Today, a little boy asked to wear my red sunglasses. He put them on, grinned sheepishly, then gave them back to me quickly, his laugh so bright and pure and sweet. Jimmy Kunjombe, the director of the school in Bagamoyo, visited me when I was sick and he was in town for a medical treatment. He told me about everyone there… his wife and son, the neighbors, the kids at school. Most of the students I worked with have graduated primary school and are now off in first or second grade. He reports that they are doing well in school and making good grades. When I greet the borrowers at Tujijenge, I say, “Shikamoni,” my respects… They accept them and grin at the strange visitor in front of them, always delighted that I know a little Kiswahili. They joke among themselves, “Ah, this Chinese person knows Kiswahili! Why? Why would she come here and talk to us?” Then their thoughts leave me, and they become business people again. They concentrate on their loans, counting the money to make sure it is all there, signing papers, reading the loan contract aloud to one another. Sometimes I draw a spot of ink onto a client’s thumb so she can “sign” for his money. I want to answer their question: Why would I come here to talk to them? Because their bravery is of the most noble and humble sort. They work and endure, without expecting an instant fix. “Get-rich-quick” is not an option. They know tomorrow and the next day and the next may not be any easier than today, but they persevere. They battle through Malaria, and worse. They are business people, entrepreneurs, innovators. They are working for their children, for all children to come.