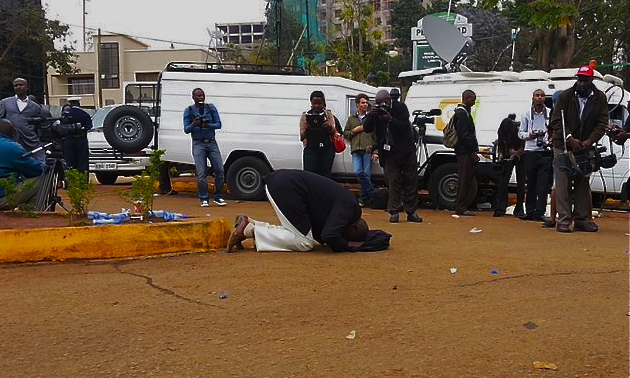 The media hype may be winding down but many of us here in Kenya are still shaken by the Westgate terrorist attack. While my own experience may not be as compelling as those in the news, it has left me with a deeper compassion for those who live in constant fear.

Early afternoon Saturday, September 21st, I was sitting in a seminar at the Storymoja Literature Festival at the National Museum of Kenya in Nairobi when my friend leaned over to show me a text message she just received from our new roommate, Julia.

At first we didn’t think much of it.  Armed robberies happen from time to time in Nairobi and we figured this would pass and Julia would get out safely. Plus, there’s no real 911 in Kenya, so what could we do? We texted back that she should come to the museum for the next lecture.

Had we known what was really going on, that armed gunmen from the Somali terrorist group Al-Shabaab had stormed the mall, I’m sure we would have reacted differently. But we had no idea and continued listening to the speaker on stage.

Soon, however, we got a sense that things were worse than a robbery. Our cell phones buzzed with messages asking us if we were okay, and telling us to stay away from Westgate. As with many people in the seminar, a mix of upper class Kenyans and expats like me, Westgate was our go-to spot for household items, free wi-fi, happy hour and frozen yogurt. I had even planned to meet a friend there that morning before going to the museum, but he got stuck in traffic and I went to the festival early instead.

An hour later, we still didn’t know the extent of the chaos unfolding at Westgate. At a poetry panel, an MC announced the absence of one of the speakers, a famous Ghanaian poet named Kofi Awoonor. In the coming days, we’d learn that Awoonor was shot dead in the mall.

By the end of the panel, word of the massacre had spread. I had messages from Kiva staff in San Francisco, where it wasn’t yet 8 a.m; they were doing a roll call. The event’s organizers told everyone to go home and stay inside. The remainder of the festival was canceled.

But we were hesitant to head back. Westgate was only a kilometer from our apartment. Our usual taxi driver came to get us. He is based at Westgate and was there when the gunman arrived. He was able to escape right away, but two of his colleagues were killed. I couldn’t believe he was working.

Fortunately, Julia texted us that she had also gotten out and was already safe at home. On the way to meet her, we picked up provisions for the rest of the weekend, just in case. At home, we found her sitting on the couch, shell shocked. We surrounded her with hugs, snacks and whiskey until she was ready to recount the details of a terrifying afternoon.

“I was about to go to Nakumatt to find bedsheets,” Julia said flatly, “but I didn’t want to carry them around, so on second thought I took a look at some other shops.”

That second thought may have saved her life. Nakumatt is where Al-Shabaab supposedly set up camp and killed many, but when the shooting started, Julia was across the mall. She ducked into another store and the owner pulled down the security gate. They stayed there for five hours, listening to screaming and gunfire, until a security team rescued her. 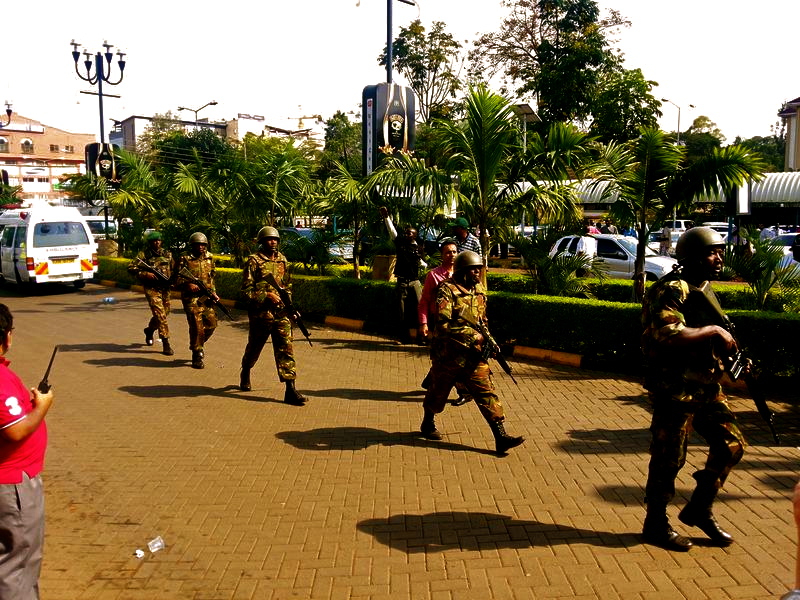 Soldiers about to storm the mall

By 8pm, after calling everyone we knew to make sure they were okay, all six of us roommates plus a friend visiting from upcountry were together. We stayed up late into the night squeezed on the living room couch. We just sat there, watching the death count climb on Twitter. In the background we heard occasional gunfire, and later, explosions, the whole time haunted by the thought that it could have easily been us.

On Sunday, we were shocked the siege was still going on. All day, military helicopters and drones circled the neighborhood.  We debated if it was safe to go out for food. Eventually, some of us ventured down the street to buy vegetables

That night, we opened bottles of wine, cooked a big meal and played endless games of Taboo, managing to distract ourselves a bit. But even seven peoples’ laughter was interrupted every so often by the battle sounds outside.

On Monday morning I woke up before daylight to a roommate sobbing. That’s when the reality of this nightmare really hit me. Her ex-boyfriend, who had been missing since Saturday, was confirmed dead in the middle of the night. The last time anyone had heard from him was an hour after the shooting began. He was in Nakumatt’s meat aisle and had called a friend to tell him where he was hiding.

“There are people killing people in here,” he said.

That afternoon we went up to the top floor of our apartment building. From there we could see a tornado-like plume of black smoke coming from Westgate. I got the same tight-chested, falling-fast feeling that I did on 9/11. 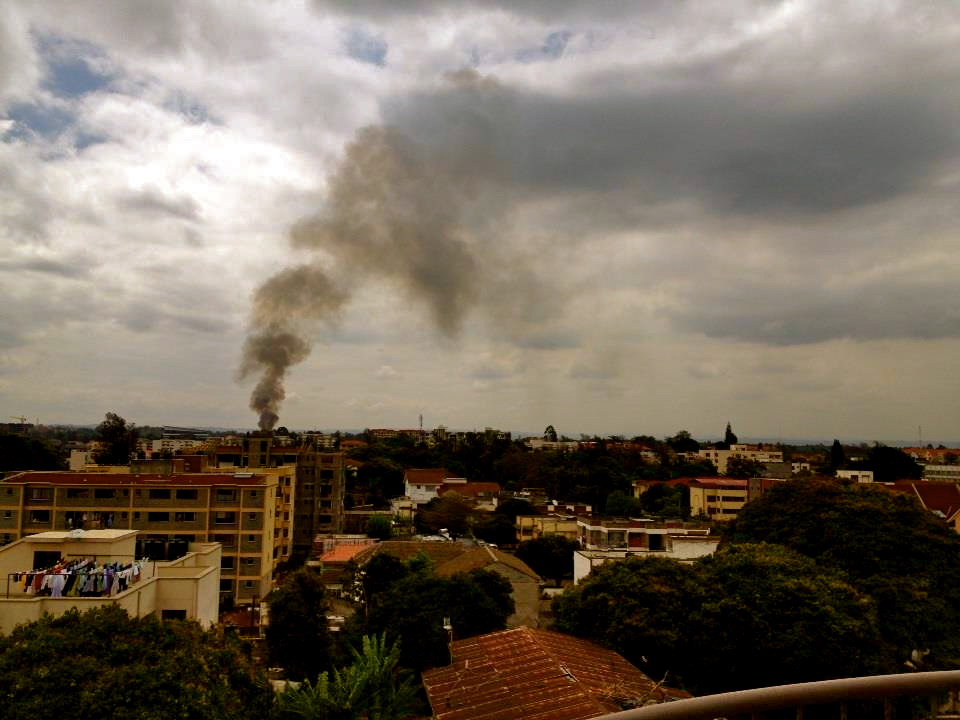 View from my apartment

The streets of our neighborhood were empty. We took a taxi to a popular outdoor Indian food court nearby where we were the only customers. I talked to an ice cream shop owner I know and asked if he had any business that day.

I went back to my apartment. The helicopters kept coming. I didn’t leave again until Thursday. I tried to work but was too distracted by the crying and the blasts and the drones. I became obsessed with the news and didn’t feel like talking to anyone back home. I wondered how life would be after this.

It ended suddenly, as if it never happened. The death count officially capped at 62, though from what we heard on the ground it was actually more in the hundreds. The media switched stories. The emergency blood drives and free counseling in Uhuru Park packed up. I went back to work, but no one else seemed sad. Now, weeks later, traffic has returned to the main roads, but every time a car backfires my heart jumps.

I’ve always known that violence like this happens in places like Somalia, Iraq, Pakistan, or Sudan. But until Westgate, I never knew what it actually feels like to live in that environment, to think that I might die on the way to lunch. To hear these sounds and think, are they coming for me? 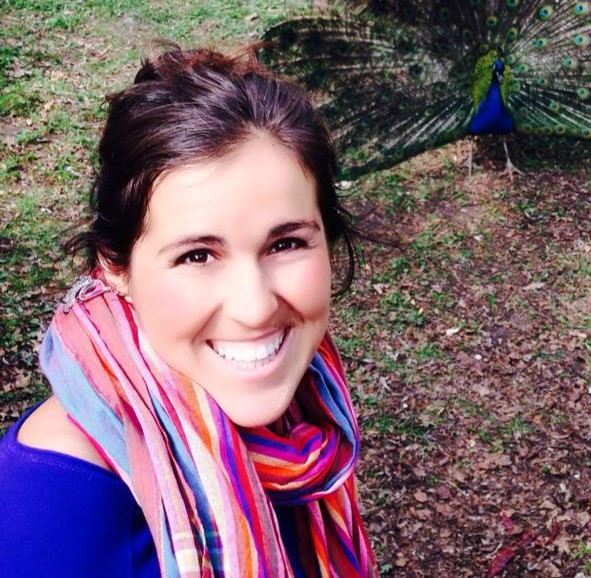