A walk through Osh Bazaar 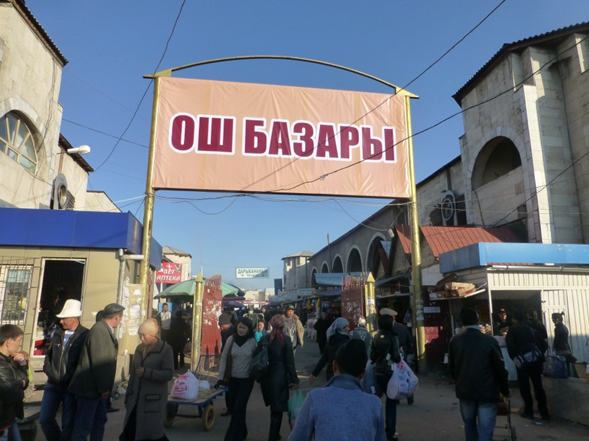 It’s crowded, overwhelming, loud, and cheap. And you can find almost anything you need here. Osh Bazaar is a huge marketplace near the center of Bishkek. People from all over Bishkek and the surrounding areas come here to buy and sell.

I entered this country with just the bare essentials. I squeezed everything in my traveler’s backpack and a small daypack. So when I first rented my place in Bishkek after a long apartment hunt, I needed to buy more “stuff”: everything from sheets and pillows, to winter boots and jackets. Word on the street was that “Osh Bazaar” was the place to find everything I needed.

So one early Saturday morning, I headed in the direction of Osh Bazaar all by myself. I was excited to be venturing out on my own since very few people in Kyrgyzstan speak English, and this would be a great way to improve my Russian. 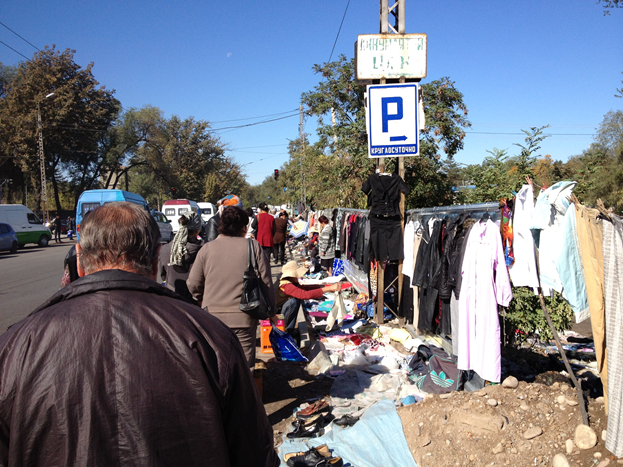 Selling on a sidewalk

As I got closer, I saw people selling right on the sidewalks of busy streets. And a lot of them were selling used goods. This went on for a few blocks, and I thought this must be the entirety of Osh Bazaar. In reality, the market was just getting started. I realized that when I finally saw a huge banner welcoming me to Osh Bazaar. 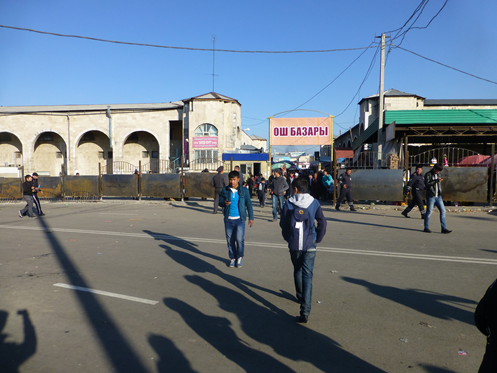 The Main Entrance to Osh Bazaar

Although I had a long list of things I to buy, bedding was on the top of my list. So I started striking up conversations with random people. 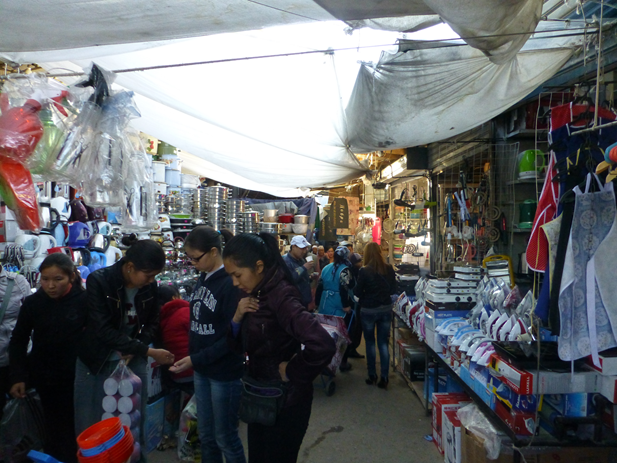 Everybody seemed eager to help me, but they all pointed me in different directions. The place felt like a maze, and I quickly lost sense of direction. I was enjoying getting lost however, and I just kept walking and taking pictures. You can find pretty much anything you want in Osh Bazaar. Everything form groceries to winter clothes, TV sets to beauty products. 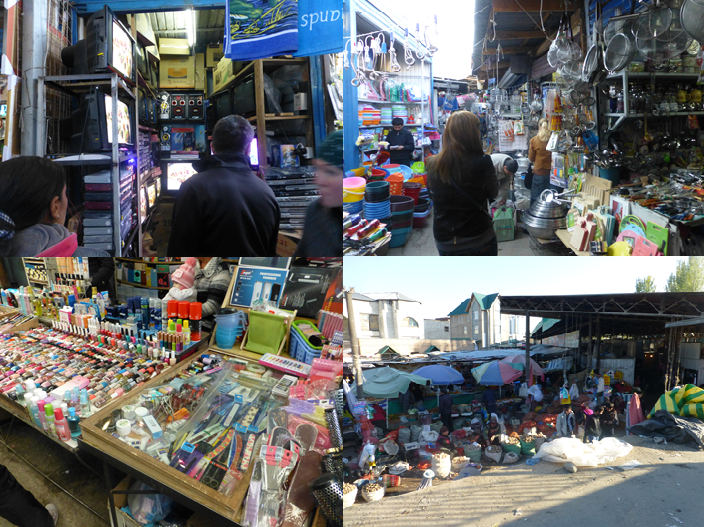 Different sections of the market

After walking for about an hour, I finally reached a bridge that connected to another section of the market. 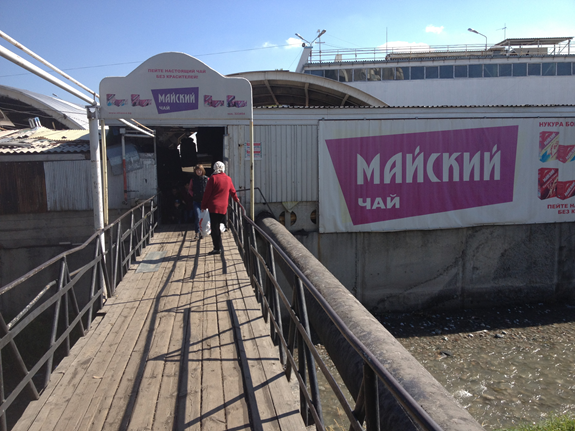 A bridge connecting two sections of the market

Right after I crossed the bridge, I finally found what I wanted. I saw sheets and pillows and blankets and comforters, lots of them. And there were about ten different vendors selling the exact same things side by side. 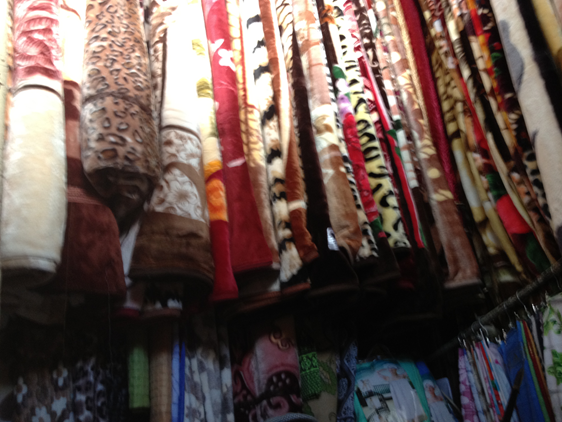 I approached one of them and pointed to a blanket.

Shopkeeper: Pyat sot……….. (With my basic Russian, I just couldn’t catch everything when he spoke so fast.)

In an attempt to calm down the situation, I went to the neighboring stall and inquired about the prices. They were the exact same as the first stall. Even though the items were relatively cheap, I knew that you always had to bargain in these markets.

Me: Skolka skidki  (How much discount are you going to give me?)

He pulled down the blanket and started telling me all its great features. But when I started walking to the next stall, he quickly offered me a 10 percent discount. I asked him to make it 20 percent and offered to buy pillows and sheets in addition to the blanket. He hesitated, but then went up to 12 percent. I increased it to 15 percent, and extended my arm to make a deal. He shook my hand, and the deal was done! Having bought more stuff than I could carry, I decided to call it a day. 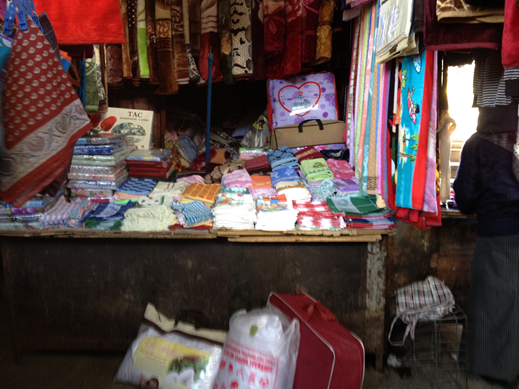 Items that I bought

When I first came to Kyrgyzstan, I noticed that the country didn’t have a website like craigslist. I thought it could be a great business idea to open something similar here. But when you go to Osh Bazaar and see the wide variety of goods being exchanged there, you start to realize why there isn’t much demand here for such a website. It’s because Osh Bazaar already acts like a “Craigslist” in Bishkek. 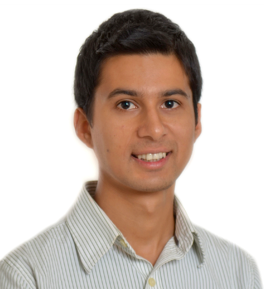 Abhi is interested in leveraging technology to empower local communities with financial literacy and economic development. He completed his undergraduate studies from Carleton College with a degree in Physics and Computer Science. After graduating from college, he has been working at an investment management firm in New York, focusing on portfolio risk analysis. Having lived in and experienced completely different cultures of Nepal, rural Midwest, and New York City, he also really appreciates the importance of experiencing new cultures. Having finished his first fellowship in Kyrgyzstan, he is excited to be continue with partners in the Ukraine.