As a Kiva Fellow in Ghana, the most rewarding aspect of my fellowship has been meeting people like Khadija, whom I met while visiting microloan clients in a “zogo” (Muslim neighborhood) in Hohoe, in the eastern region of Ghana.  Because she touched me deeply, I’d like to share the little I know of her story with you. 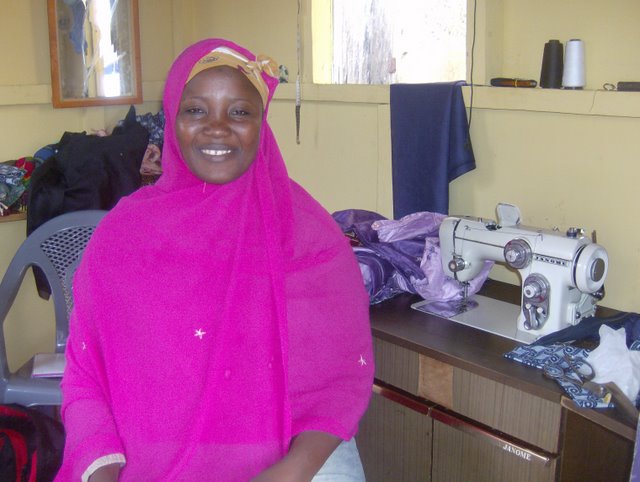 Khadija is a beautiful woman who has seen more than her share of hard times.  In this photo, you can see her lovely smile, which I had to coax from her after we had quietly chatted for some time.  She has had one leg amputated, and must use crutches to move about.  She is a single parent of two boys, ages ten and seven, and lives with her mother and a sister in the eastern region of Ghana.  As a single parent and an amputee, Khadija almost certainly faces untold prejudices in this cultural context.  These facts alone speak of her strength and perseverance in the face of adversity, which have surely aided her in her entrepreneurial efforts.  Khadija is a seamstress, and has been for the last 16 years.  She just opened her own shop four years ago, however, and this is the major source of income for her household.

With this loan funded by Kiva lenders, and Khadija’s first loan ever, she bought the fabric, lining, zippers and thread that she needs to make the skirts, blouses and dresses for the clients she serves.  She tells me that business is slow right now.  The local economy is sluggish, and many women don’t have extra money to have dresses made right now.  She expects it to get better with the coming festival season, when many people buy new clothes.  For now, she is focusing on teaching her apprentice the trade.  In Ghana, an apprentice pays for the privilege to learn from a teacher.  It is a small amount, but this also helps Khadija during this slow time of year, when farmers are waiting for the crops to harvest and when they will have a little extra money in their pockets to spend on new clothes.  Khadija’s income has increased since she borrowed this loan, and she told me she is better able to care for her family.  After paying all her household expenses and the school fees for her children, she has even been able to save three cedis per week.  When I ask what she is saving for, she tells me, “A brighter future.”

Khadija hopes that in that brighter future, she can expand her business and buy some of the tools that will make her job easier, such as a button-holer.  She is grateful to Kiva’s partner organization in this region, and to her Kiva lenders.  Of her Kiva lenders, Khadija says, “Allah should reward them for their kind gesture.  Allah should give them strength.”  My interpreter and I walked away from Khadija’s business in complete silence.  Her countenance moved and touched us.  We later agreed that there is a sadness that cannot be described which emanates from this woman.  Khadija’s story is largely left untold here.  She is not a woman to share her hardships with the world.  But as we walked away, I thought to myself how Allah has rewarded me in having met Khadija, and how generously He has rewarded her with amazing endurance through the difficulties in her life, accompanied by a humble, kind nature, and a kind of quiet strength that should not be underestimated.