Following The No Pago Movement in Nicaragua

As some of you may have noticed, this week a notification was placed underneath the borrower profiles on all loans to Nicaraguan borrowers on Kiva.org. It reads, in part:

In mid 2008, a movement began in Nicaragua called “Movimiento No Pago” (a movement for non-payment of loans). This movement, supported mostly by farmers of the north of Nicaragua with ties to the left-wing party in Nicaragua, has been organizing protests (some violent) and forcing microfinance institution branches to close…This group has submitted a law to the government to create a moratorium on debt repayment. The group contends it will not make payments on their loans until such law is passed. If passed, the law could have a crippling effect on the microfinance industry and banking sector in Nicaragua. The network of microfinance institutions in Nicaragua (ASOMIF) has been negotiating with the government in support of an alternative proposal.

During our training two weeks ago in San Francisco, I learned for the first time about the “No Pago” movement, known formally as “el Movimiento de Productores, Comerciantes, Microempresarios y Asalariados del Norte,” or the Movement of Farmers, Merchants, Microentrepreneurs, and Wage-workers of the North (among other similar names). Giovanna, Kiva’s Microfinance Parternships Manager for the Americas, wanted me and the other two KF9ers going to Nicaragua to know about the situation in advance.

I could write pages and pages about what’s going on, but I’ll give just a brief summary. The movement, led by Omar González Vílchez, began by protesting in front of the government. Last July, President Daniel Ortega told the group to go protest outside the offices of MFIs instead. With many borrowers finding themselves unable to pay their debts in part because of the global economic crisis, No Pago focused its ire on what it deemed to be usurious interest rates being charged by MFIs. No Pago’s most violent moment came on July 22, 2008, when the movement attempted to burn down the offices of La Fundación para el Desarrollo de Nueva Segovia, an MFI in Ocotal. Last year, the movement introduced a bill to the National Assembly that would install a moratorium on debt repayment. The MFIs were eventually able to reach a compromise with the government by which they agreed to restructure delinquent debts instead. All was quiet on the No Pago front until this year, when the movement decided to reintroduce the motion for a moratorium. Currently, the MFIs are again working with the government in search of a compromise.

Earlier this year, the Nicaraguan newspaper La Prensa wrote that according to economists and businesspeople, if the movement was to achieve its aims, it would cause economic chaos in the country.

25 investors, banks, foundations, and other funders of microfinance in Nicaragua – including Kiva – published an open letter in La Prensa last month, reproduced below [via], expressing their worry over the continued deterioration of the microfinance climate in Nicaragua and imploring the government to redouble efforts to safeguard the legal order, the employees of MFIs, and their work. 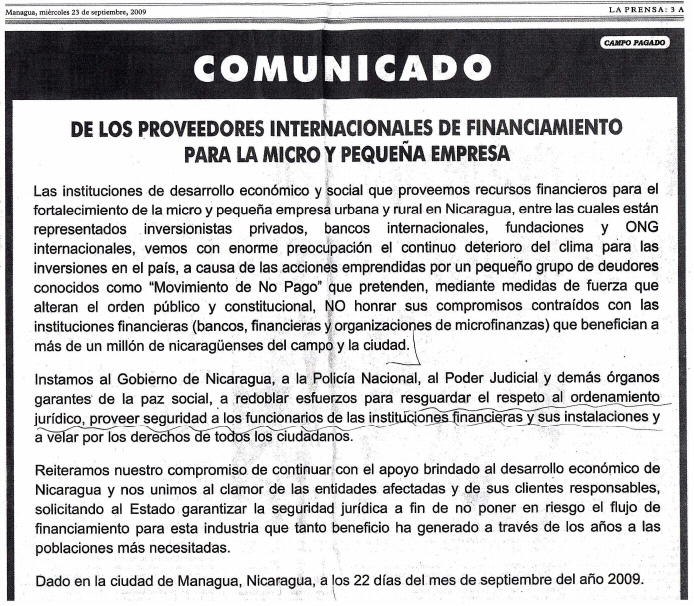 Full-page letter in the Nicaraguan newspaper La Prensa, 9/23/09, co-signed by Kiva and 24 other groups around the globe.

Fortunately, Kiva’s partner MFIs in Nicaragua – including my MFI, AFODENIC – have been largely untouched by the situation, at least directly, as it is mostly concentrated in the north of the country. On Monday, my first day at AFODENIC, my supervisor brought it up, but it might have been because she saw that I’d written it down in my list of things to ask her. Still, when we caught the tail end of a news report about No Pago on television while we were buying lunch yesterday, it quickly drew everyone’s attention.

At the moment, I don’t have personl experience with how No Pago is impacting the work of microfinance institutions here–since, as I mentioned, Kiva MFIs have been largely sheltered from it. But now that you know the background, I’ll try to keep you updated as I watch this situation continue to unfold from the ground.

In the meantime, AFODENIC borrowers need your support more than ever! You can loan to them here.