Four days to make a difference?

If you are a lender on Kiva then you may have an inkling of how I’m feeling as I write this blog.   Elated and…well…wondrous.

You know that feeling.  The one you get when you’ve gone online and put in your $25 towards a loan of $850.  Then, a few hours later you receive “the update” from Kiva; an email to say 33 other people have done the same thing.  The loan has been fully funded.

It’s a beautiful moment, where elegant software design harnesses people power.  There is something wondrous about it. It restores my faith in the world, in humanity.

So perhaps you can imagine how I’m feeling now.  One of the MFIs I’m working with, Vision Finance Company, rallied together, overcoming considerable technical hurdles, to hit their loan posting targets for December – three days ahead of schedule. 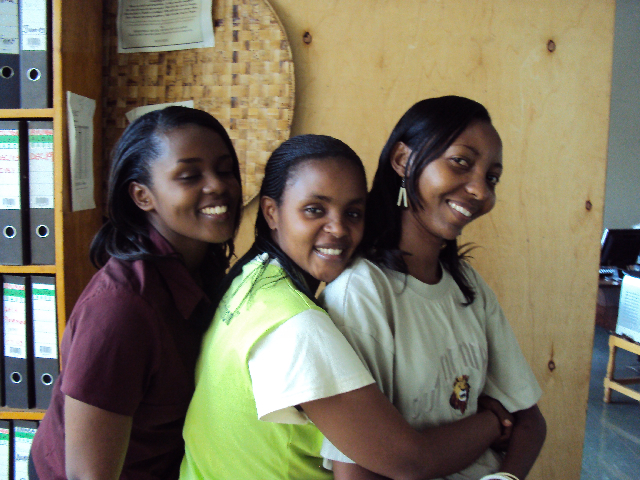 Fiona, Bright & Solange. The new VFC Kiva Coordinators and their supervisor. Pulled out all the stops for December.

As I write this, 53 have been fully funded and I know by sunrise in Rwanda tomorrow morning, the remaining 20 are likely to have been funded by upwards of 2000 social lenders from all over the world.

Let me give you some idea of the scope of human involvement required to make this happen. And perhaps most inspiring, the speed at which it was possible.

Every month, every single loan you see on Kiva’s website has been reviewed by volunteer editors and translators.  In December, many editors take holidays and field partners are advised to have all loans for December posted in the first two weeks of the month – or they may miss out on reaching their fundraising target.

No editors, no approved loans.  Its one of Kiva’s many checks and balances, and driven by hundreds of volunteers.

The crunch was on.  First week into December I sent a worried email to the VFC Kiva Supervisor asking how many loans had been received from the field.  “Will we hit out target?” I said, “I’m worried”.

You see, for some MFIs, not hitting the monthly target set by Kiva can mean they lose precious interest free capital with very real effects on liquidity and the ability to disburse future loans.

On Friday 10 December, we had a total of 5 loans in the office. We needed closer to 75 posted in under a week.  Loan officers had met, interviewed and signed up plenty of Kiva borrowers, but they were waiting for cash to disburse the loans.

Without a definite date of disbursement, accurate repayment schedules cannot be created and no loans can be posted to Kiva.

An impressive flurry of activity ensued.  A directive had been issued to all branches.  Kiva loans were an absolute priority.  And disbursement for all loans must take place by Wednesday 15 December.  No exceptions.

This was no mean feat.  Head office effectively mobilised the entire organisation from admin and finance staff to loan officers to branch managers and even borrowers.

5pm on Tuesday 14 December loan officers rolled in from various districts in Rwanda to patiently deliver Kiva profiles and photographs.  The paperwork was piling up.

The two Kiva Coordinators worked until 10pm that night to have profiles drafted and ready for review in the morning.  By midday on Wednesday 15 December, I had played my role (admittedly unglamorous) by editing and publishing all prepared drafts – ready for final approval.

24 hours later, countless editors across the globe had  logged in and done their bit…we were rocking and rolling.  48 hours in, thanks to thousands of online lenders, almost all of VFCs December loans were funded.

What a team!  From MFI loan officers to branch managers, upper management, supervisors, Kiva Coordinators to Kiva editors and finally to you the Kiva lender.

Thousands of individuals, sophisticated software, the internet and collective human will managed to pull this off in just four days.

Yep, wondrous is definitely the word!

Michelle Curtis is a Kiva Fellow working with Urwego Opportunity Bank and Vision Finance Company in Kigali, Rwanda.  She is currently in the business of building lasting connections between entrepreneurs and lenders across the world.

Get that feeling!  Be a Kiva Fellow, apply today.