This past Monday, October 20th, I celebrated with tens of thousands of Indonesians in Jakarta to welcome their 7th President, Joko Widodo, or Jokowi, as he’s affectionately called. Jokowi is the first directly-elected Indonesian president who is not tied to the political or military elite dated back to the Suharto era. He rose to success from poor family background by building a furniture export business in his hometown Solo. He had to borrow money (just like a Kiva borrower!) to start his business and failed several times before he found success. He later became the Mayor of Solo in 2005 and after that the Governor of Jakarta.

Jokowi is known for his anti-corruption campaign and his push for transparency in the public sector. While serving as the Governor of Jakarta, the bass player Robert Trujillo of Metallica, which is one of his favorite bands, gifted his guitar to Jokowi. Jokowi then handed the guitar over to the Corruption Eradication Commission (KPK) as a token to avoid any potential violations of the Corruption Law. Unusual for Indonesian politicians, Jokowi often made unannounced visits to the poor in the villages or small businesses in the markets and spoke with them personally about the day-to-day challenges that they face. As president, he pledged to increase financial inclusion and strengthen the microfinance sector. It is this down to earth, personal connection style that galvanized many in the country to vote for him.

On Monday, my Indonesian friends and I waited for about 3 hours in the heart of Jakarta for Jokowi to arrive. It was, as usual, extremely humid and hot, thousands of people were jostling for a good position. People were waiting on the top of buildings, climbed onto trees and bridges to get a good look. The excitement in the air was contagious; everyone wanted to see their new president. 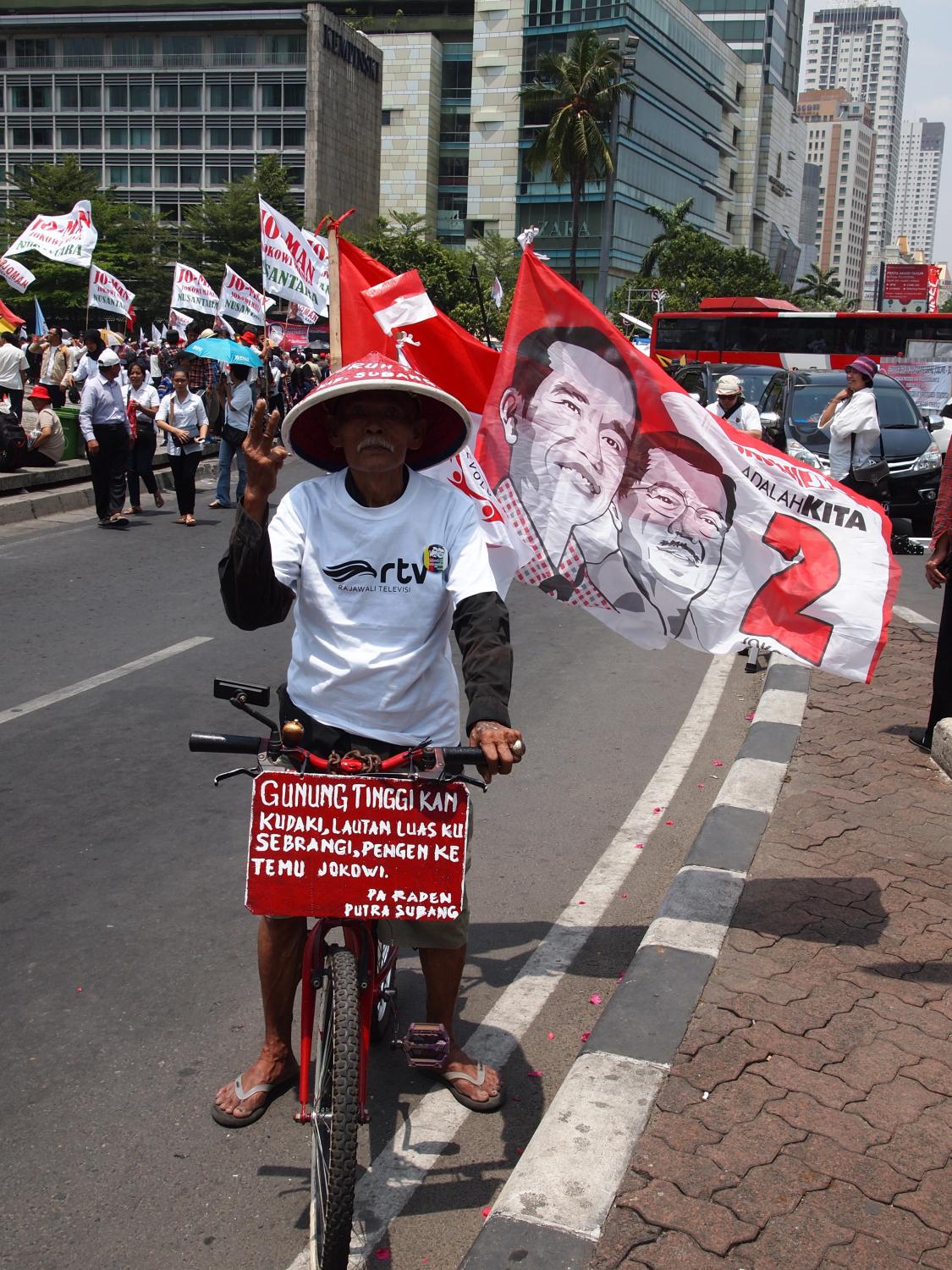 An old man from West Java with a painted sign: "I climbed the high mountain and crossed the vast sea because I want to meet Jokowi 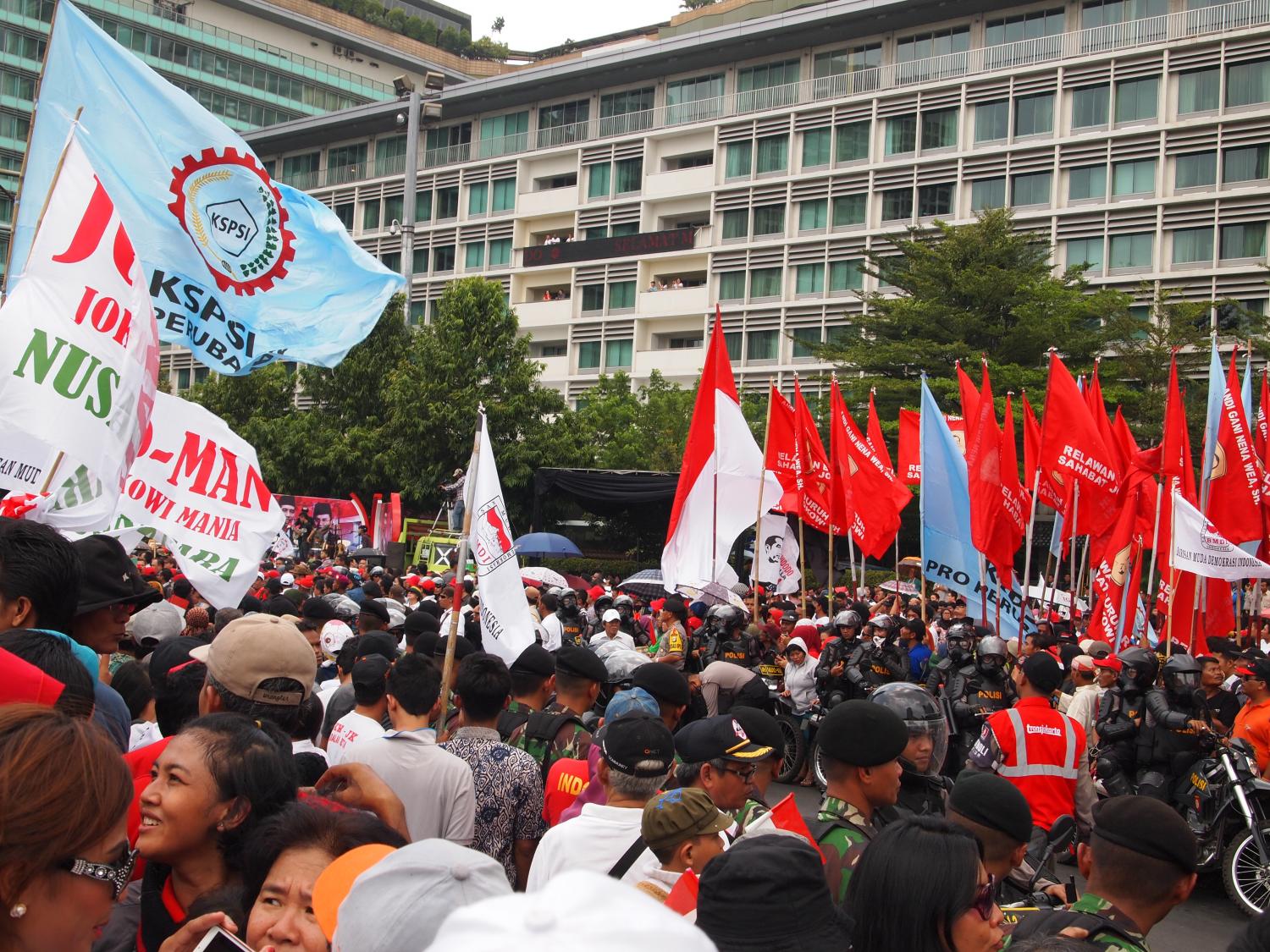 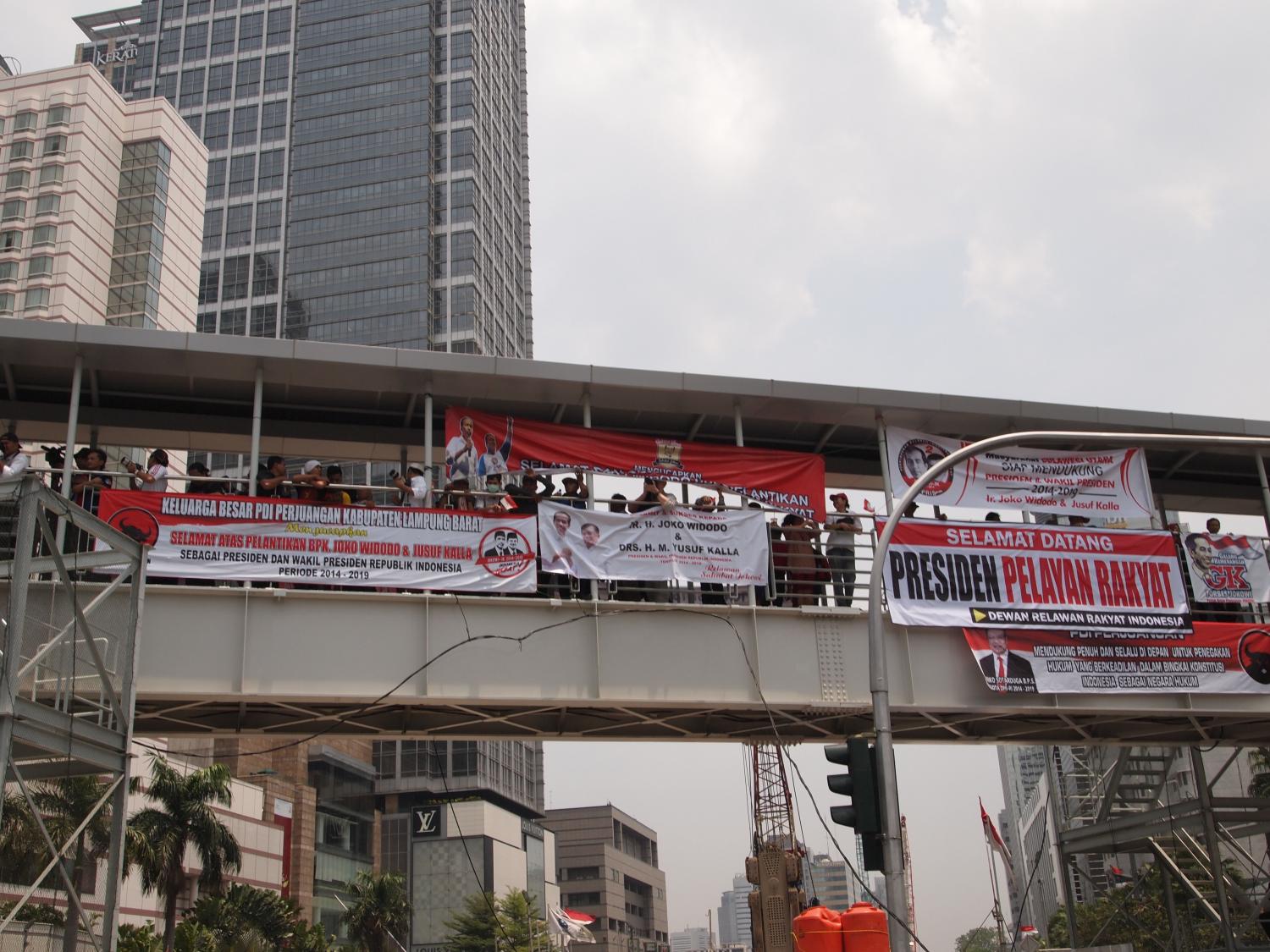 People crowding onto the bridge to get a good view 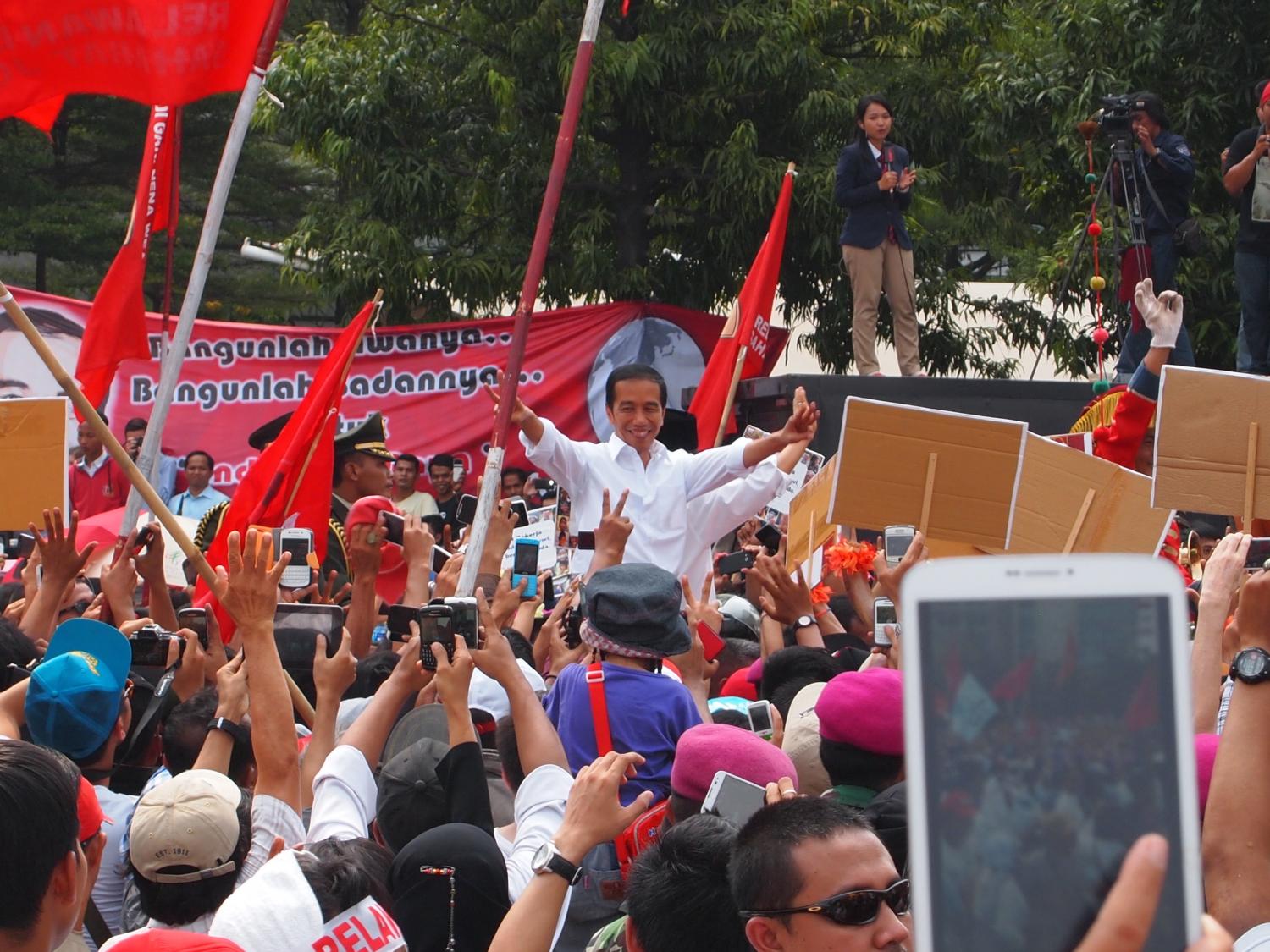 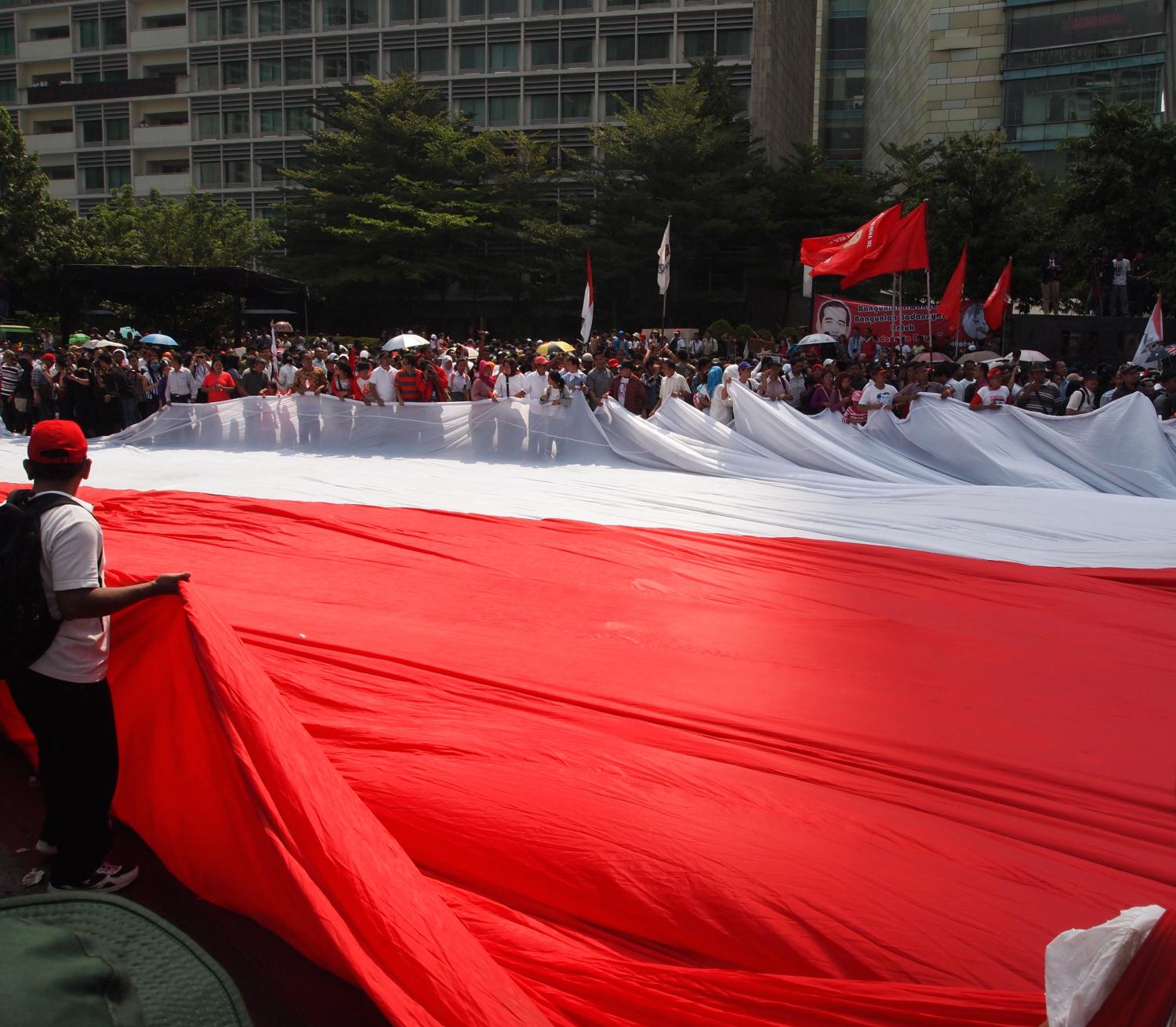 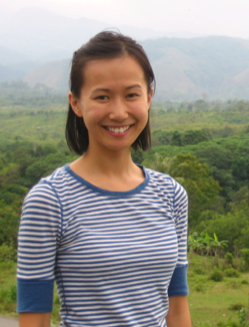 Originally from Hong Kong, Irene grew up in Los Angeles, California. She has worked with several non-profit organizations that provide financial services to vulnerable groups and she is committed to building economically equitable and sustainable communities. She is especially interested in financial inclusion issues to the most marginalized. Irene received a master's degree in Urban Planning from the University of Southern California and a bachelor's degree in Economics from the University of California, San Diego. Irene has studied and lived in China, Indonesia, and England and is excited to be adding India to the list. She served with KF19 in India and will be working with two partners in Indonesia.