Karibu Kenya! My first month as a Kiva Fellow in Nairobi

Exactly one month has passed since I arrived in Nairobi, Kenya. As a complete newbie in Africa, I had no idea what to expect when I first landed at Jomo Kenyatta International Airport.

Before my arrival, I had done some research about the country that was going to be my home for the coming months. A quick google search on Nairobi informed me that Kenya’s capital is the 12th largest one in Africa, the name Nairobi is a Maasai phrase that translates to “cold water” and it’s located 1,800 meters above sea level. My internet search also informed me that the capital is commonly known as Nairobbery, due to the high level of crime, particularly armed robbery in the city. When I asked around amongst friends and acquaintances who had visited Nairobi, they described it as a dirty and boring city that should be avoided. For tourists, it is mostly used as a transit point for safaris in Maasai Mara, or beach holidays along the Indian Ocean coast. With this in mind, I did not have particularly high expectations of Nairobi when I first arrived on the African continent.

After four weeks in this city, I have now formed my own opinion. Nairobi has more to offer than I could ever have imagined. It is definitely a city of contrasts. Within a 15 minute drive you get from the modern city center, to the beautiful leafy suburbs to East Africa’s largest slum.

The colorful Maasai Market in down town Nairobi

The leafy suburb of Kilimani

There is only a well trafficked road that separates the two neighborhoods Kilimani and Kibera. Kilimani is one of the wealthiest areas in the country and is home to Mwai Kibaki, the president of Kenya. On the other side of the road you’ll find Kibera, one of the largest slums in Africa, where people live in unbearable conditions.

Kibera is one of the most densely populated places on the planet. Exactly how many people live here is impossible to say, but estimates range from 500,000 to 1.2 million. Only 20% of residents have electricity, and even fewer have access to clean water. Education is scarce, which traps the vast majority of people in a spiral of poverty. One in five children will not live to experience their fifth birthday. 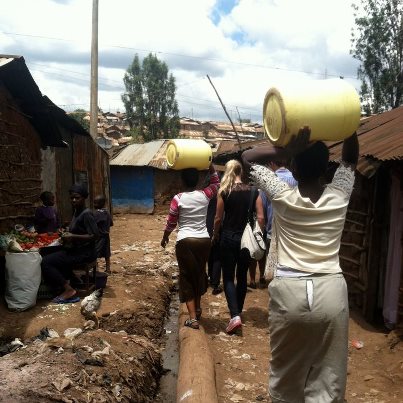 During my visit to Kibera, I visited the organization “Shining Hope for communities”. Shining Hope founded “The Kibera School for girls”, where they give young, at-risk girls a brighter future through education. It’s an amazing organization that works to create a better life for the people of Kibera. Read more about them here.

Kids playing at “The Kibera School for Girls”

Pascalia from Kiva giving a presentation in Kibera about Kiva Zip

As I already stated, Nairobi is a city of contrasts. Just outside of the city center, not far from modern skyscrapers or Kilimani and Kibera, you will find Nairobi National Park. Here you can see giraffes, elephants, black rhinos, zebras and other wildlife attractions with the capital’s skyline in the background.

Nairobi has definitely given me a new perspective on life, and I would recommend anyone that has the possibility to visit this city. After spending a few weeks here I have learned that the city is not only know as Nairobbery, but also as “The green city in the sun”, which I think is a better description.

Lend money to a low-income entrepreneur in Kenya here