Kiva in Liberia – What a Fascinating Country!

This place is like no country I’ve ever seen, and I’ve been fortunate to see over 130 in my 20+ years of adventure travel.

The history of Liberia is unique in Africa because of its relationship with the United States. It is one of the few countries in Africa without roots in  European colonialism.   Liberia did not exist as a country until it was colonized by freed American slaves in 1847, forming a government based on the US system.  The capital city is named after President James Monroe and the monetary currency is the Liberian Dollar.

This government was overthrown by a military coup in 1980, which marked the beginning of 25 years of brutal civil war that left an estimated half a million people dead (out of a total population of just 3.5M)   A CNN report concluded that 90% of the female population was a victim of sexual violence during the war, and the UN listed Monrovia as the most dangerous city in the world.

Charles Taylor, the worst of the dictators is currently on trial here for war crimes but all you have to do is walk around town to see his legacy:   land-mine victim amputees who are homeless after being forced to murder their own parents/families in a drug-induced haze and become child-soldiers in the blood-diamonds-for-guns war with Sierra Leone.  It’s truly heart-breaking.

On the other hand, it’s a great proving ground for Microfinance as a solution to world poverty.  If it can enable this country, the world’s poorest, to incubate small business entrepreneurs then what more proof do 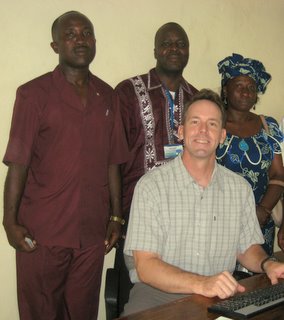 we need?  And microloans are perfect since Liberia’s economy is based heavily on agriculture and simple manufacturing, both of which are capital non-intensive.   In the 1960’s Liberia was the fastest growing economy in Africa; can Kiva and its lenders help the country recover from 25 years of brutality and return it to those glory days of past?  Stay tuned…

(sources: wikipedia, CNN, CIA_factbook, and me walking around town…)