Three years ago, the streets I drive on today in downtown Lomé were ablaze with burning tires and barricades, as civilians protested the contested results of the presidential election. Gnassingbé Eyadéma, the longest ruling leader in Africa (second in the world only to Fidel Castro) had died on February 5, 2005. Two months later, an election pronounced his son, Faure Gnassingbé, the winner, defeating an opposition coalition of six parties.

More than 100 people were wounded in the violence after Faure Gnassingbé was declared the victor of Togo's presidential elections in 2005. (Photo: NYT)

Though the elections were monitored by an outside organization and proclaimed legitimate, some “abnormalities” were cited. According to the New York Times: “In one discrepancy, in the northern prefecture of Kozah, 218,786 people were shown to have voted for Mr. Gnassingbé. Government statistics show the entire population of Kozah as being 156,000.” 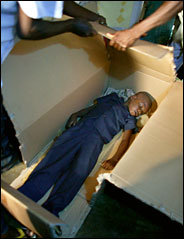 Protesters were shot by the military, innocent bystanders were caught in the crossfire, and nothing ever changed with the election results.

Now, almost four years later, aside from the occasional garbage fire and petty crime, the streets are generally peaceful. The evidence of the period of human rights violations has been reduced to the occasional passing remark, and international sanctions have recently been lifted.

Due to my living situation, however, I personally have a constant, subtle, and morally unsettling reminder of the atrocities.

Before coming to Togo, I met a nice Togolese guy who was volunteering at a soup kitchen with me in New York. We became friends, and when I found out that Kiva was sending me to Togo, he offered to let me stay with his family in Lomé.

I didn’t know that living with his family would make my time in Togo the most rewarding, comfortable and fulfilling travel experience I’ve ever had.

I also didn’t know that his father was the head of the branch of the Togolese military that protects President Gnassingbé.

This is the same President Gnassingbé who is accused of rigging elections, brazenly disrespecting the sanctity of democracy, and commanding a military that allegedly murdered opposition supporters in their own homes in one of the worst human rights violations in modern West African history.

“Le Colonel,” as everyone calls my homestay father, is a strong, serious and often stern man, yet it is clear that the universal respect that the entire household (and neighborhood) has for him goes deeper than his rank. He is strict with his two teenage daughters – they are never allowed to go out, except to go to school or buy something in the neighborhood – but he has explained to me that it is because he wants them to finish their education successfully, without distractions.

His niece, Brenam, lives with us as well. She is 24 (like me), and she has a one-year-old daughter that is the cutest child alive. When she found out she was pregnant two years ago, her father kicked her out of the house. With nowhere to go, she turned to the Colonel, and he took her in. He now pays for Brenam’s continuing education – she is studying finance – for her food and shelter, and for a maid to look after her daughter. Without the Colonel’s generosity, what could Brenam have done as a single mother with no family support? I shudder to think.

It was not easy to decide to write this blog post. With everything the Colonel has done for me, and all the time I have spent in his household, I must admit that I feel an allegiance to him and his family. I love them, and I feel as though I am betraying them in some way by writing this post. However, in the end I have more of an allegiance to the truth, to the dissemination of information and cross-cultural understanding, than to most other things.

I don’t know what the Colonel’s role was in the violence of 2005. Perhaps he was a leading perpetrator, confidently and without hesitation ordering the deaths of innocent people in the same way he orders another bottle of water from the boys who work at the house. But maybe he was a rock that kept the waves of violence from washing away the entire country. Maybe he felt the same compassion for the victims of the clash, the children killed by stray bullets, as he did for his young pregnant niece, and maybe he did his best to protect them amidst extreme political pressure and military commitments.

In the spirit of the American justice system, I ask you all please to reserve judgment on the Colonel. The generosity he has shown me and the way his family has welcomed me as one of their own has allowed me to focus my energy and attention on my work for Kiva, knowing that I have a safe, comfortable place to come home to at night.

I will never know what kind of man the Colonel was in the tragedy of 2005. All I can know for sure is that he loves his daughters enough to be strict with them, he loved Brenam enough to take her in when she had nothing, and he was kind enough to share his home and his family with a helpless American stranger. And for those things he has earned my respect and gratitude.

I am a Kiva Fellow, Class of KF6/7, serving three months in Lome, Togo, and three more in Thies, Senegal. Please check out my current MFI, IMCEC, and see all of their fundraising loans here!