Loans In The Time Of Cholera, In Haiti

Please note that I am living in Northern Haiti, which wasn’t hit by by the January 2010 earthquake, and not in Port-au-Prince.

As I waited for a bus to take me to Trou du Nord, Northern Haiti, I was struck by a curious sight. I was surrounded by hoards of impeccably dressed schoolchildren. Their clothes were perfectly ironed, shoes spotless, shirts tucked in and socks pulled up. They portrayed an elegance of military ilk, if it weren’t for the spectacular collection of hairstyles and bows displayed on the heads of the giddy schoolgirls.

But as the children jostled, they also paid close attention to their feet, for Haiti suffers from a very serious litter problem. They don’t do bins here. Litter is simply discarded on the street. Eventually, when the piles become unmanageable, they are set on fire. It’s a pretty unpleasant substitute for garbage collection.

This juxtaposition fascinated me. Immaculate appearance with a backdrop of grotty disorder. But Haiti is an intriguing country, probably very misunderstood, and full of loud, lovely, wonderful people with an admirable sense of joie de vivre.

Haitians are one of a kind: passionate; energetic; hospitable; generous; bold; funny. There is never a dull moment here. I’m surrounded by a cacophony of shouting, joking, laughter and song; in the street, on a bus, in the office, at church. I was nervous before I arrived, but warm hospitality soon settled my fears. I remain cautious though, as Haiti’s still not safe. I’m very wary of bringing out a camera. I’m careful about discussing the presidential election. I don’t go out at night. I feel very fortunate that my housemate, a keen weightlifter, happens to be twice the size of everyone else. I’m very careful about what I eat. I ensure that I apply hand sanitizer before every meal.

Life in Haiti is tough. I crossed the border from the Dominican Republic and immediately saw a stark difference between the standard of living of both countries: Haitians are seven times poorer than their island cohabitants. For the overwhelming majority there is no access to simple amenities. No electricity. No running water. No gas line. Homes are fragile and overcrowded. It’s no surprise that a cholera epidemic was able to spread so venomously in such a short time. Roads are often atrocious. There are no ATMs. The latter may not seem essential, but it brings its challenges.

Food stall in Haiti - not all that common

One thing that has shocked me about Haiti is how hard it is to find food. I’ve visited a lot of developing countries, some of which are poorer than Haiti (in terms of GDP per capita), but I’ve never been to a country where finding a meal is such a challenge. Apart from in Cap Haitien (Haiti’s second largest city), permanent food stalls hardly exist. Cafeterias don’t exist. In rural areas, finding food that you haven’t grown or raised yourself often coincides with an extremely long journey, especially if you’re making that trip by foot, a necessity when many Haitians struggle to pay for public transport.

Life was hard enough before Haiti’s capital lost up to 320,000 people to the earthquake of January 2010. Now, over 150,000 of Haiti’s population have been infected by a cholera epidemic from which nearly 4,000 have died.

There’s a strong chance that these recent catastrophes are why Haiti is the most searched word on Kiva. It may also be because Haiti is the poorest country in the western hemisphere. Perhaps its proximity to the USA, home to the vast majority of Kiva lenders, has something to do with it. Whatever the reason, Kiva lenders have been crying out for Haiti loans for a long time. 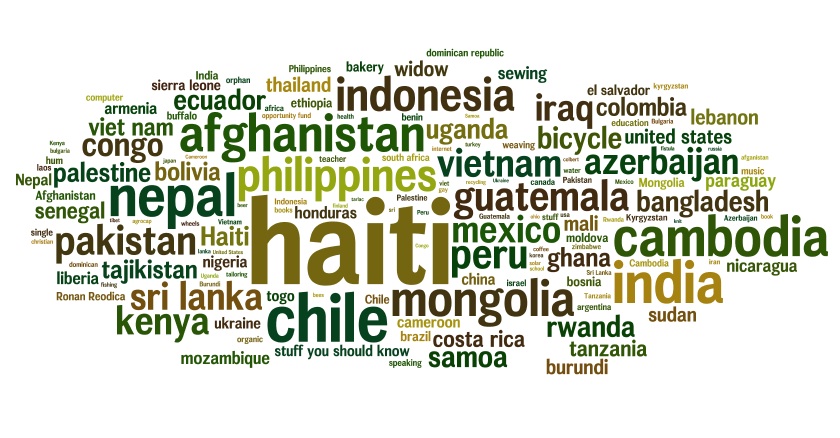 Graphic depicting word searches on Kiva. The bigger the word, the more the searches

Haiti loans on Kiva have been very scarce. There has never been an established process set up at the Haitian branch of Esperanza International, Kiva’s Field Partner in Hispaniola, for uploading loans on to Kiva. This is predominantly because there is no-one responsible for Kiva in Haiti. The DR-Haiti language barrier has also made things difficult.

Esperanza’s loans have predominantly come from the Dominican Republic, though it’s worth noting that many of Esperanza’s DR loans go to Haitian immigrants. The odd Haiti loan has found its way onto Kiva thanks to the help of a Hope International employee, but these were inevitably funded so quickly that most Kiva lenders probably never knew they were there.

Loan officer fixing his chain on the way to a Bank meeting. Time to enjoy the view.

I was tasked with coming to Haiti to set up this process. This has been easier said than done. What with the cholera outbreak, protracted presidential elections and the subsequent unrest, my arrival was delayed from early December to the beginning of January. I would have liked at least 6 weeks here. As it happens, I’ve just over 3. Still, when I leave Haiti next weekend I’m pretty confident that we’ll have a system in place which will mean that Haiti loans will finally be a regular feature on Kiva. I’m crossing my fingers as I write, quite tricky on a QWERTY keyboard.

We’ve kept the process simple. I’ve been training loan officers to explain Kiva at loan disbursal meetings, implement a client waiver, interview borrowers, take a decent photo and then write up their story. I haven’t needed to train them on Kiva’s systems because Esperanza International already has a Kiva Coordinator in the Dominican Republic who will upload the loans.

My challenge has been a lack of loan disbursal meetings to practise the process for real, as Esperanza International historically disburses very few loans in January and February. There have only been two so far, and there will be three this week. Still, we’ve been able to practise at loan repayment meetings and the loan officers here seem like fast learners. I’m also lucky to have a country director who’s passionate about Kiva and Obed, the aforementioned Hope International employee, to lend a hand when I’m gone.

Loan officer interviewing a Kiva borrower for the first time

I’d like to set some expectations about the amount of Haiti loans you should expect to see on Kiva. While Esperanza International has 9 branches around the Dominican Republic, there is currently only one in Haiti (not including a ‘complimentary services’ office in Port-au-Prince). This means that, even at peak lending time, there will only be around 3 to 5 loan disbursals a week. Still, that’s far more than currently appear on Kiva. Hopefully, if Esperanza International continues to grow in Haiti, more branches will open and this figure will rise.

There’s so much more to say about Haiti, but I’ll save that for another time. As I head back to the DR at the end of the week, memories of this country will stay with me for a long time. Truth be told, I really don’t want to leave. I love it here. As international news stations broadcast Haiti’s misery, my own picture will be one of a fun-loving, joyous nation, albeit often a hungry one. While Haitians are well aware of the struggles that life can bring, they could never be accused of not making the most of it.

Nick is coming to the end of his placement with Esperanza International. He’s looking forward to starting a new one with Interactuar in Colombia.