2016 can officially be crowned the Year of Nostalgia.

The evidence is clear. This year, 20 years after opening their first case, Scully and Mulder have returned to help us answer the age old question- “Aliens or nah?”. Blink 182 transported us back to the years of our teenage angst with their new album that debuted at number one. And let’s not forget, Clinton is running for president… What year is it again?

Yet, the ‘90s movement that took the cake this year has to be Pokémon Go. Pokémon has swept the nation--no, the world-- with its new mobile game. As Kiva Fellows serving in developing countries, one would think that we were immune to this pervasive trend, but just as globalization brought us trade agreements and Coca-Cola, it too has turned us into inspiring Pokémasters.

We thought we would share some of our Pokémon catches with the Kiva family as it brings up an interesting dichotomy of two worlds, the digital and the physical.  This is especially true when bringing that digital world into the rural areas of countries like Kenya, India and Kyrgyzstan. It’s an unusual feeling to see a digital Pokémon right in front of you next to dirt roads, a cow, or a burning pile of trash. Most importantly, it has given us a unique view into how technology can rapidly change the world, yet also how much further we need to go to use it for good.

Caught this Pokémon in Mombasa, Kenya, at the site of the old historic port, while traveling with Kiva Fellows, Maelen and Doug. Doug got me into Pokemon Go, and we continued to catch exotic African Pokémons throughout our travels!  --Katie Hoselton, Tanzania 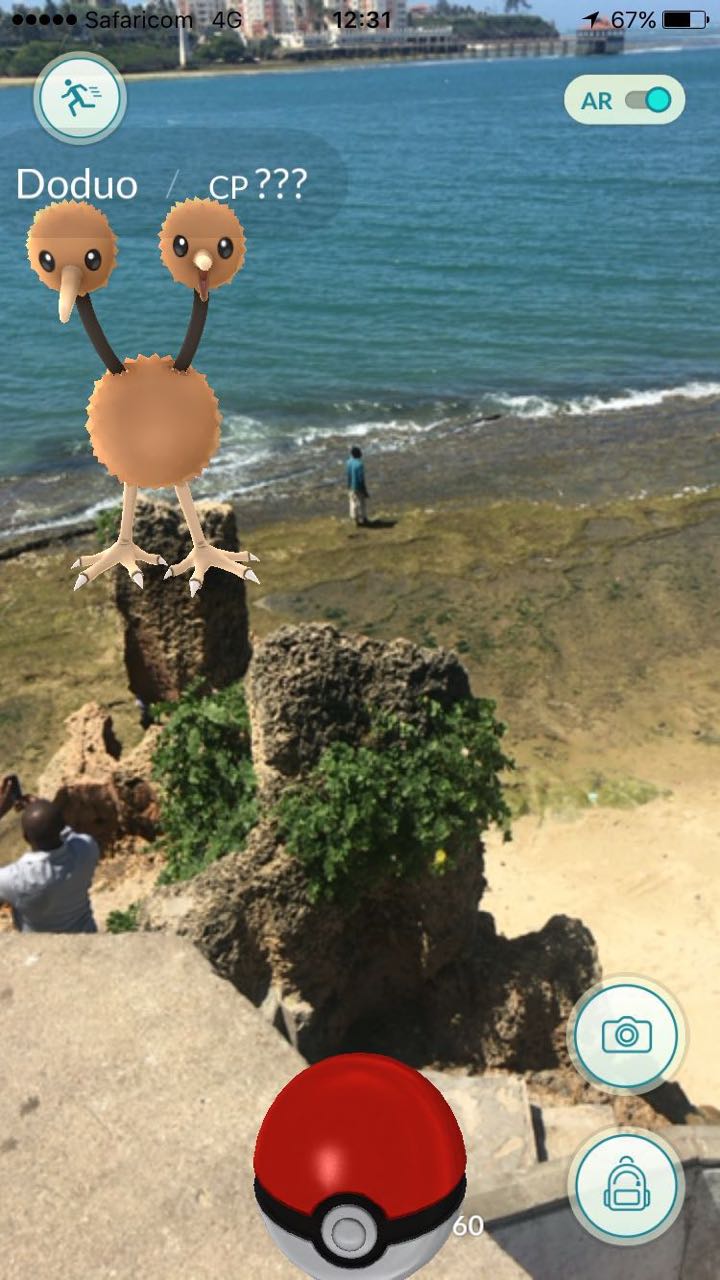 Doduo relaxing on the beach in Kenya.

This picture was from my colleague at our partner office. Many at the Milaap office are part of the Pokémon craze, so this picture is what happens when work clashes with Pokémon. The Pokémon is Ekans, which is a poisonous Pokémon snake. Unfortunately as you can see in the photo, we were out of Poké balls so we had to resort to physically catching it. Reading the local newspaper has become even more enjoyable with this new Pokémon craze, practically every day there is some ridiculous story related to Pokémon Go.  -Trishna Patel, India 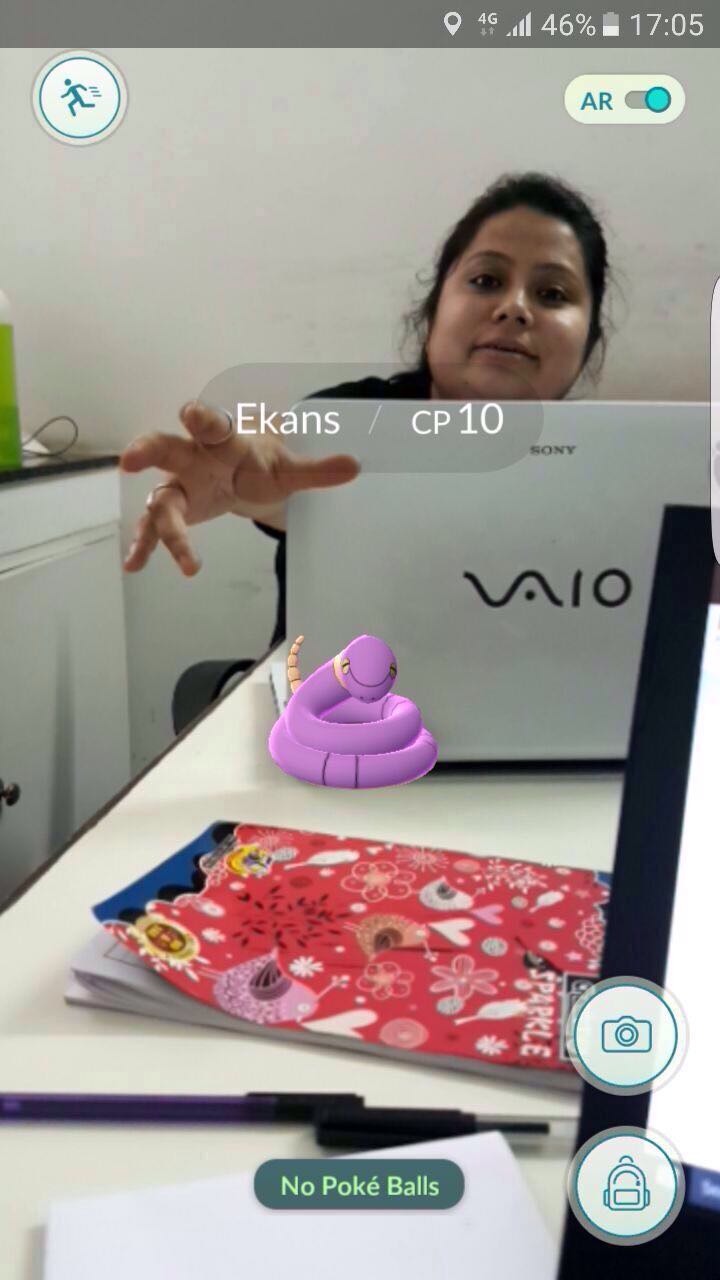 Ekans in the office.

Rattata was outside my apartment in Kisumu near an (arguably likely) situation of a pile of garbage. The second one is of Ponyta, a fire horse during my travels to the Kenyan coast with Katie and Maelen. We ventured out to Mombasa, which is a major port town in Kenya, and while we sat to relax, the Ponyta came to join us. --Doug Brainard, Kenya 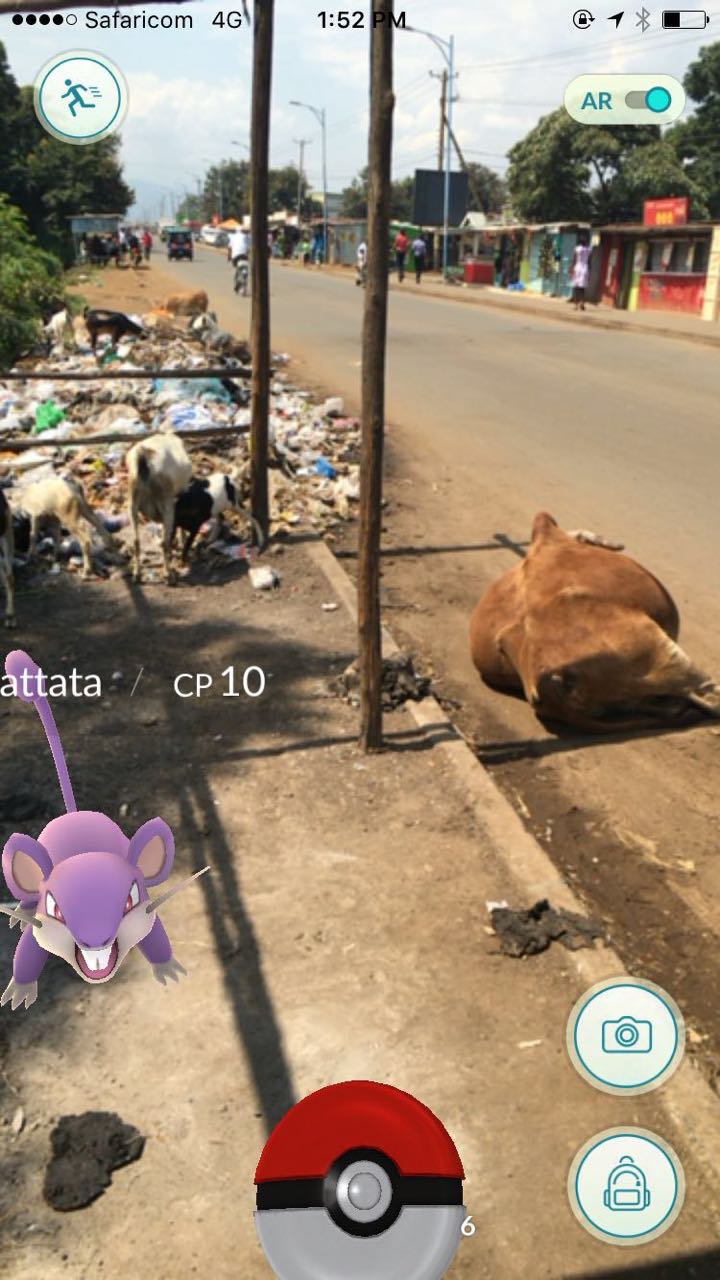 Rattata on the streets of Kisumu. 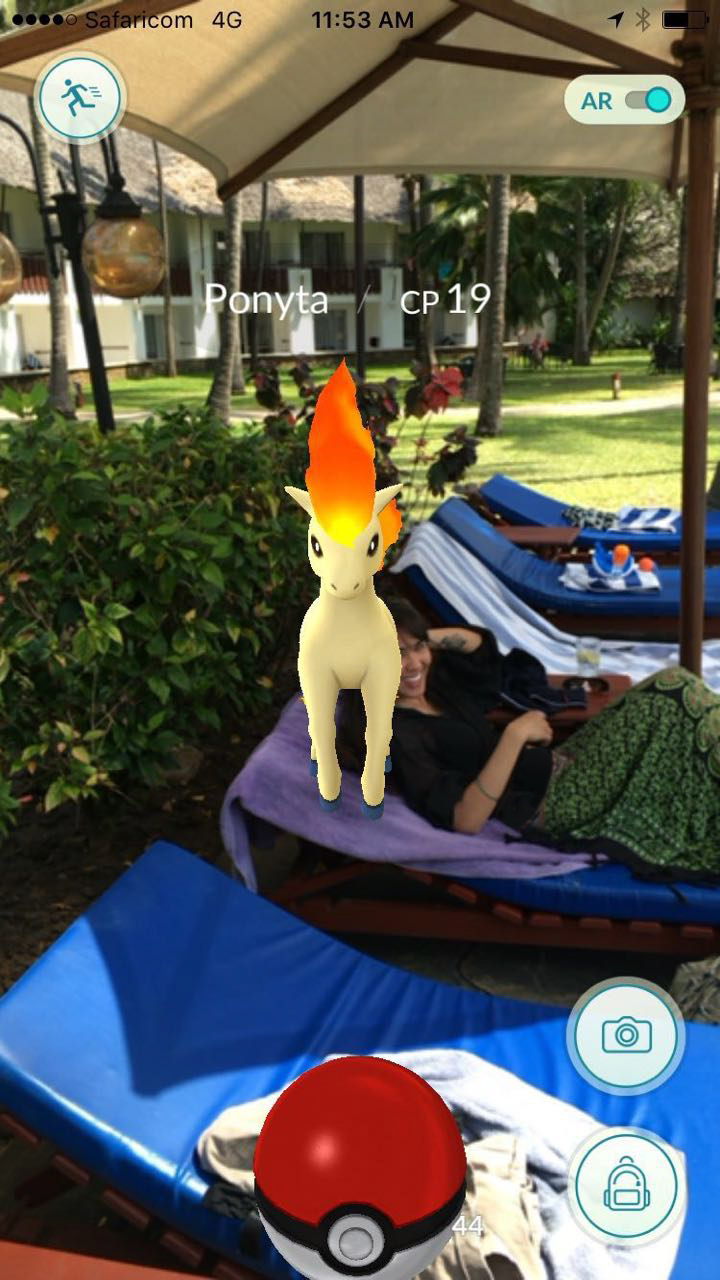 Pontya joining Kiva Fellows poolside.
In Bishkek you can't walk more than 100m without seeing a monument from the Soviet Era. The American University of Central Asia has just moved to a new campus, but ironically, at the entrance of their old campus lies a grand statue of the two great political philosophers and co-authors of the Communist Manifesto, Karl Marx and Friedrich Engels, deep in thought. Lenin and Karl Marx statues are also common sightings in parks, alleys, squares and street corners. Mankey was caught in the Alley of Heroes in Bishkek, Kyrgyzstan (quite appropriate for a fighting Pokemon!). Alley of Heroes was set in 1975 in honour of the 30th anniversary of the Victory in the World War II, which is known here as the Great Patriotic War. There are busts in bronze in the alley: Heroes of the Soviet Union - D. Shopokov, C. Tuleberdiev, G. Konkin, G. Petrenko, I. Moskalenko, N. Ananiev. This alley ends in granite stelae with inscribed names of 72 heroes of Kyrgyzstan, who received high title of Hero of the Great Patriotic War. --Priya Singh, Kyrgyzstan 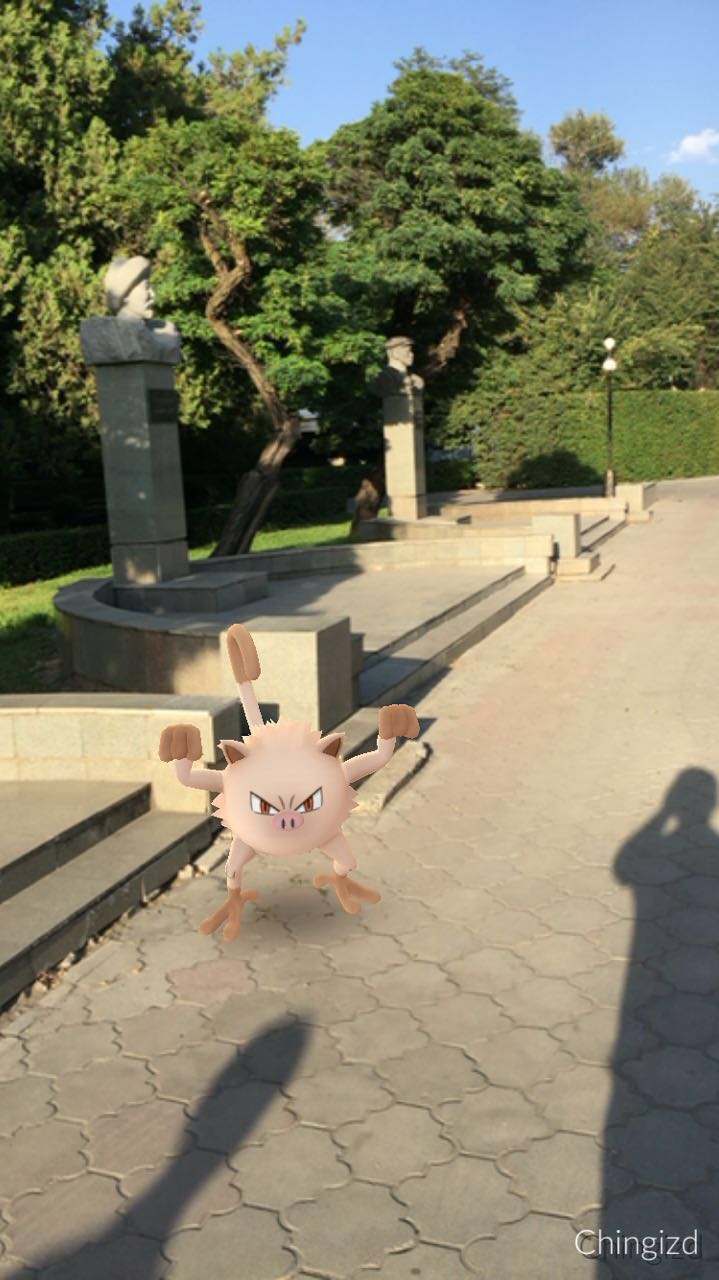 Mankey in a Kyrgyzstan alley.

My Pokémon catch photo is really blurry as I was trying my best to be super stealth so that the taxi driver in the car behind Bellsprout would not think I was taking a photo of him. One risky thing about catching Pokémon is that as you aim your phone at a garbage can, a bush or a bathroom, you are bound to get strange looks from people, which you do not need more of when you are a foreigner! In this picture you can see essential elements of life in Nairobi. A taxi, which besides motorbikes and buses, is one of the main means of transportation. Also, behind the driver is one of Nairobi's many malls. Malls are a big deal here, there are 27 malls in the Nairobi metropolitan region alone. Leading up to any one of the malls, you may pass unpaved roads and local street vendors, but once inside you feel as if you were transported to a high-end area of the western world. However, the development of so many malls has caused some critics to say that the market will soon cannibalize itself. --Maelen Haugen, Kenya 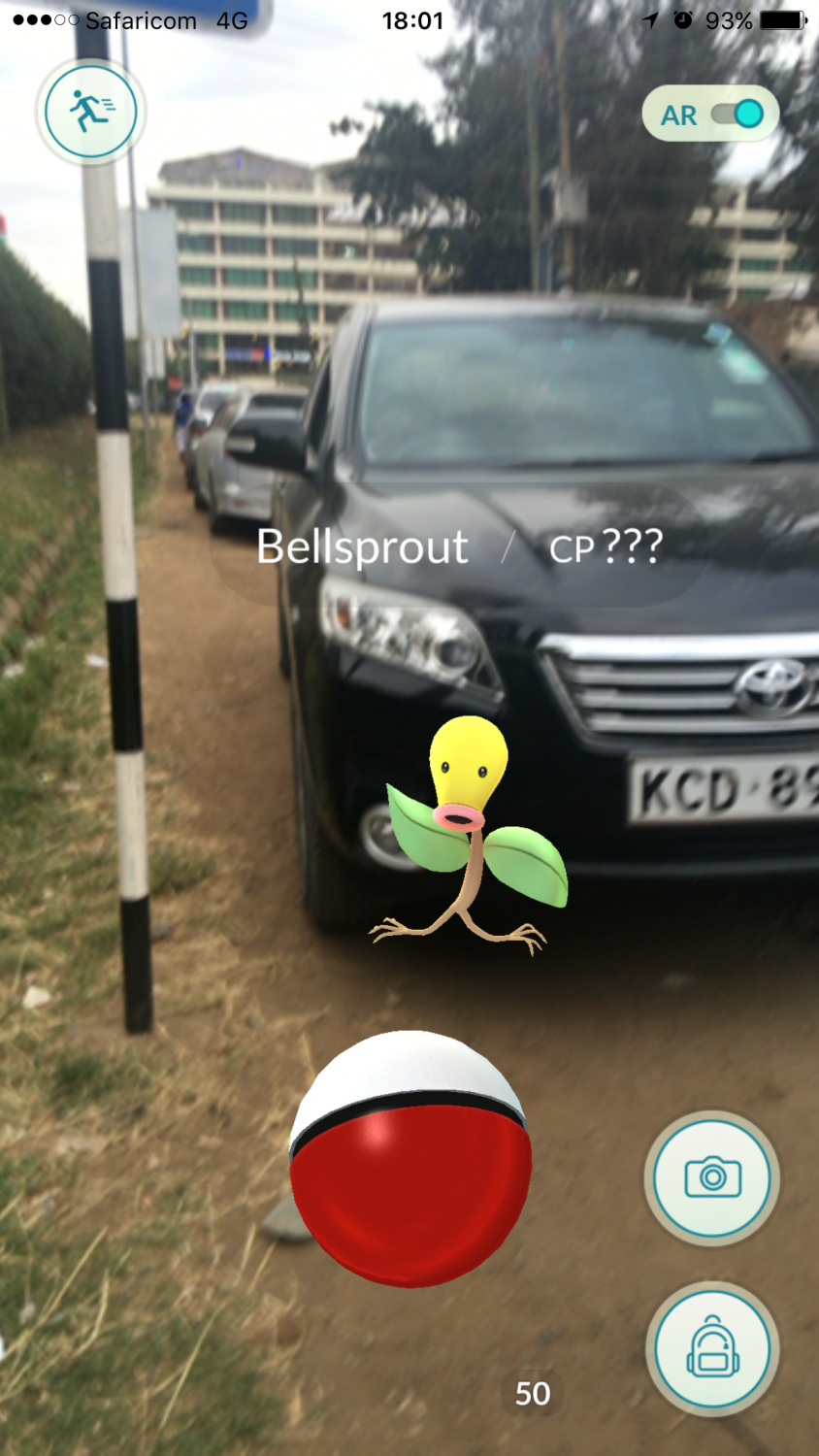 Bellsprout hailing a taxi in Nairobi. 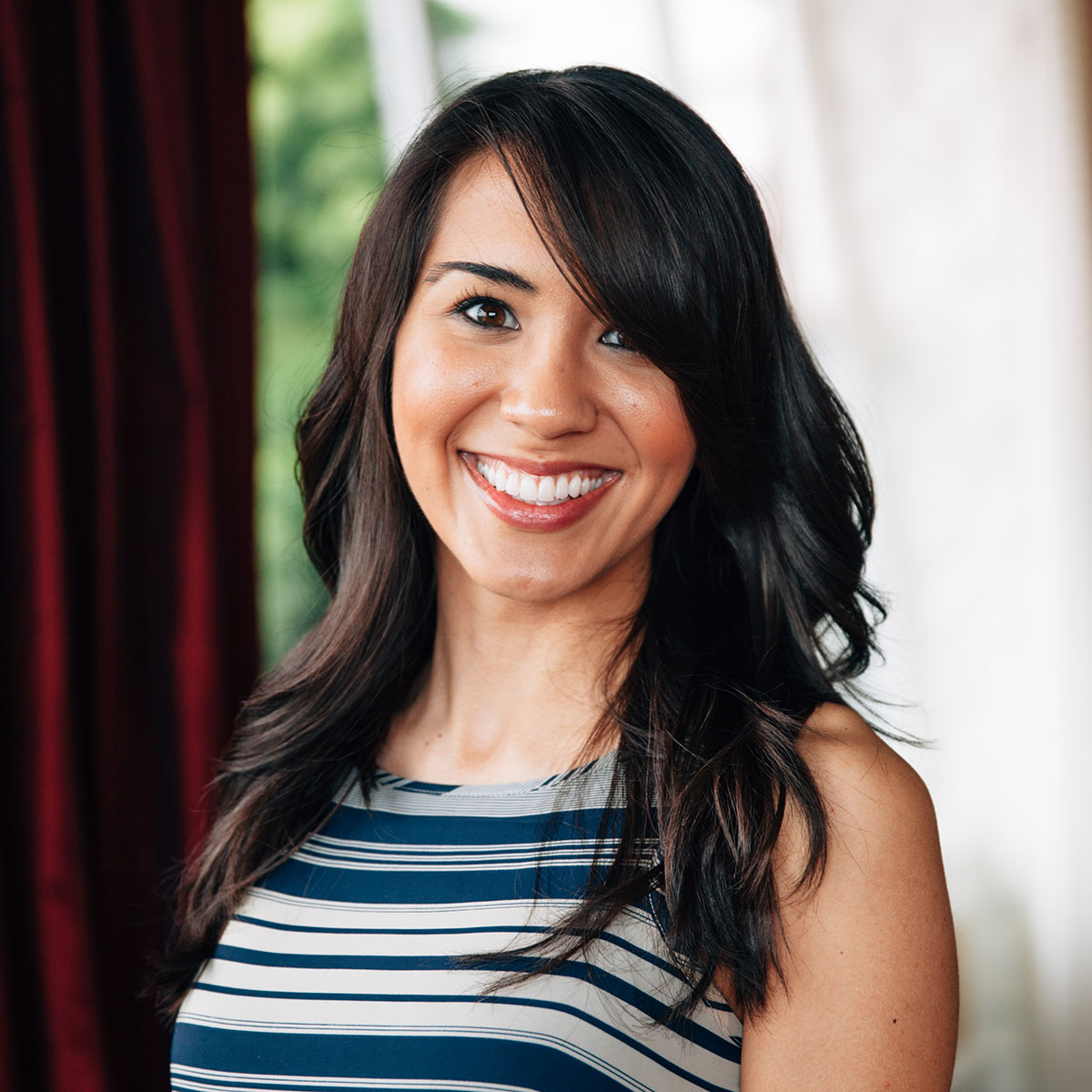 Maelen was born and raised in the beautiful state of California. Studying International Economics at the University of California in San Diego sparked her passion for development. She still remembers the day in class when she learned about the different approaches to international development, particularly Muhammad Yunus’ pioneering work in microfinance. It quickly became clear that she wanted to be a part of it. After graduation, Maelen used her marketing chops to lead brand marketing at the largest youth development nonprofit in Silicon Valley, the Boys & Girls Clubs of the Peninsula. Curiosity then struck to see how nonprofits could drive greater impact by leveraging best practices from the private sector. Eager to learn more, Maelen switched gears and moved to Cisco to manage social media advertising, product placement, and major media partnerships. She is excited to blend her nonprofit and corporate experience to support social businesses that create economic growth and fulfill human needs.