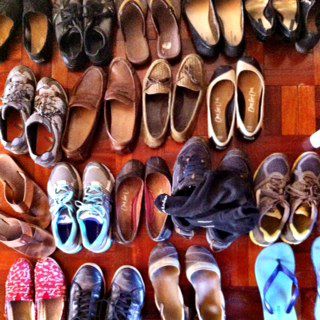 Six people, picked to be Kiva fellows. NOT picked to all live in the same house. But doing it anyways because apparently it’s harder than one thinks to find a four bedroom apartment in Nairobi!

Nairobi is overrun with Kiva fellows. Lucky for us, Katrina, who has extended from KF19, has been kind enough to let us crash with her and her new roommate Rachel, also from KF19. We have overrun their house - Felipe on the couch, Amy and Katrina in twin beds an arms length away, and Jada and Duda sharing in the master bedroom. We refer to this as the gateway to the only shower that works.  It will get truly interesting if we do not find an apartment before Eileen, also a KF19 extender, shows up tomorrow evening.

We hail from New York, Columbia, Colorado, North Carolina, Brazil and San Francisco. We are working with Kiva Zip, Traditional MFIs like Kadet and new Non-Traditional Kiva Partners like Saner.gy and Honey Care Africa. All of us can’t wait to get started on what we hope will be impactful work... but first, I’ll reflect on the pros and cons of six people living in a house together:


Pros:
Knowledge Share: Kiva fellows training part deux exists in the living room, where we help each other with zip trustee trainings, borrow verification and how to get to work on a matatu.
Economy of Scale: TP, swahili lessons and water is cheaper in bulk.
Group Dinners: Fun way to pass the evening, except when Amy doesn’t realize how hot the chili peppers are and sets our mouths on fire.

Cons:
Bathroom Lines: Six people, one working shower. We are talking strategic moves like you’ve never seen. Waking up at 6am to take a shower, then a nap...
Privacy: Pretty sure Felipes girlfriend does not think that its romantic when he skypes her at night... surrounded by five other women.
Keys: Two sets of keys. Six people heading to every corner of Nairobi.

Amy was born in Washington DC where she was taught growing up that travel was the best form of education and fell in love with exploring the world and learning about new cultures at an early age. She got her BA in Psychology and Religious Studies from Wesleyan University and spent the year following college teaching Special Ed Kindergarten. Feeling the need to do something more tangible after the 2004 Tsunami, she went to Thailand to volunteer and then explored other parts of S.E. Asia. A one way ticket landed her in San Francisco, where she has lived for the last seven years spending weekends rock climbing and camping, and fitting in trips to dive or explore new countries. She has been working at Google since 2006 on various start-up products. She's spent the last three years on the Politics and Issue Advocacy team, an exciting role that has allowed her to glimpse the inner working of a presidential campaign, attend a convention, and fly to DC every few weeks which makes her family endlessly happy. Her intentions have always been to work internationally in the social enterprise space, so she is incredibly excited to head to Nairobi, Kenya on a Kiva Fellowship and can't wait for whatever the next chapter holds!