Remembering Rizky: VisionFund Indonesia Loses One of Their Own

Monday, October 31st marked the end of Rizky’s three-month probationary period as a loan officer in VisionFund Indonesia’s (VFI) Cilincing office.  This means on November 1st he would have become an employee of VFI with full benefits.  Sadly, he was not able to celebrate this milestone because on the evening of Friday, October 28th, he tragically passed away in a traffic accident while riding home on his motorbike from a soccer game with friends.   He was 20 years old. 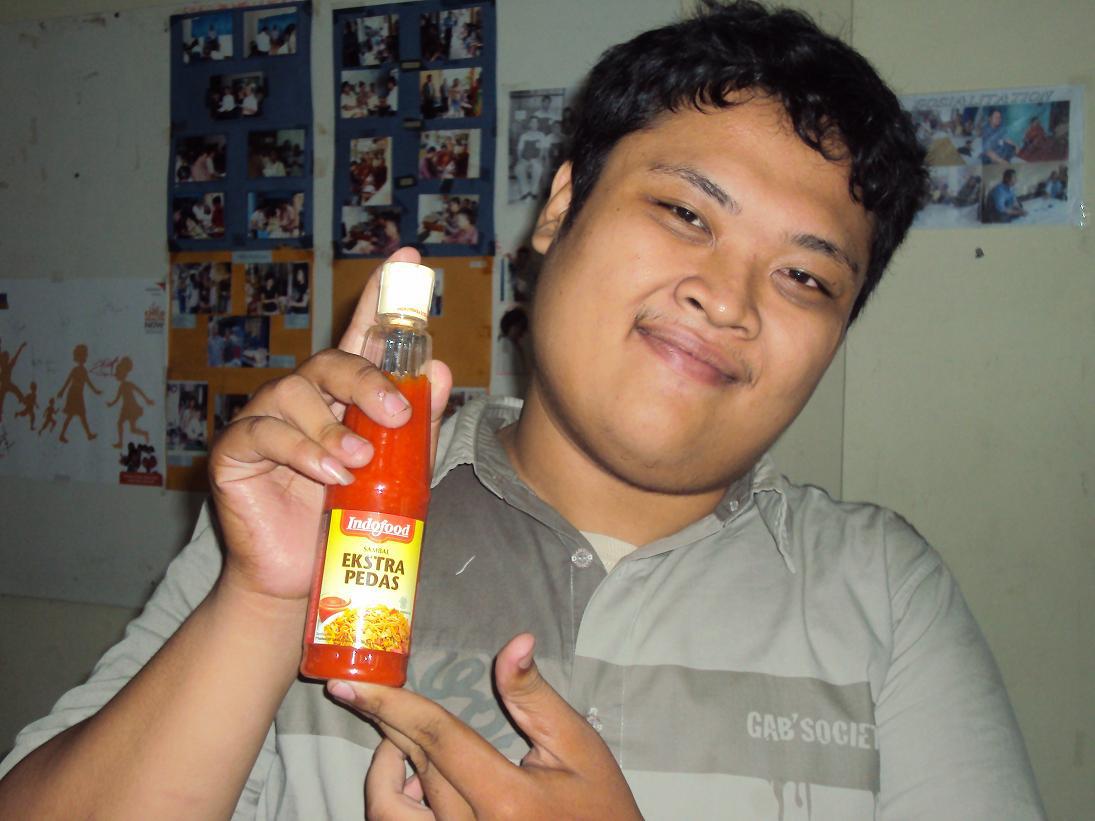 Coworkers and his family describe him as a caring young man whose joking and fun loving attitude made you realize that he had a passion for his faith, his community, and his family.  Rizky still lived at home with his parents and siblings, and he was the main provider for the family.  Every pay day he would buy sweets on the way home to give to the neighborhood children and then hand the remaining amount to his mother to pay for food and other daily needs of the family.  His mother has a small business baking cakes and cookies, but it was Rizky who used to help her sometimes with the baking and also help deliver the treats for sale.   His parents were surprised at Rizky’s devotion to his Christian faith when two separate church organizations took part in prayer for Rizky and his family on the night of the accident.  Apparently Rizky had decided to join two different parishes without either knowing.

Although I didn’t get to know Rizky beyond brief encounters during my visits to the branch office, I felt his story should be shared with you.   Often times, as Kiva lenders, we feel such a connection to the borrowers we choose to lend to through the photos and stories that we neglect to think about all of the people who spend their days traveling by motorbike, foot, or public buses around places like Jakarta to make Kiva a reality.  Without the tireless work of the Loan Officers and Kiva Coordinators at our Field Partners, it’s hard to imagine how Kiva would have become such a successful and sustainable venture.    Based on the modest salary, loan officers don’t typically take this job just for the paycheck.  They become loan officers because they enjoy being in the field and helping others less fortunate.  Though Rizky didn’t pass away while traveling specifically for his job, his death highlights the risks that many Indonesians face each day because motorbikes are their only economical source of personal transportation.  According to a 2009 article in the Jakarta Post, traffic accidents are the third largest killer in Indonesia after heart attack and stroke.  It’s estimated that 1,000 people die each in year in Jakarta alone; another source cites that a majority of these are drivers of motorbikes.  All loan officers here spend a majority of their days riding motorbikes to visit clients.

Each hired VFI employee starts off with a probationary period which means they aren’t able to receive employment benefits and 100% salary until their first three months are completed.  Therefore, unless they purchase supplemental insurance, which is rare, they are in the category of around the 90% of Indonesians without any sort of insurance coverage.   With Rizky’s untimely death, his family won’t receive life insurance benefits to help cover funeral costs or provide additional financial support.  His story highlights the overall problem of a lack of access to financial service products in Indonesia for those who are not in the middle to upper-class, products such as insurance (this is something I’ve been researching and will be posting about in the upcoming weeks if you are interested).  In situations like this, where he was currently the breadwinner, the family will surely feel not only the emotional strain, but also a huge financial shock from this devastating event. 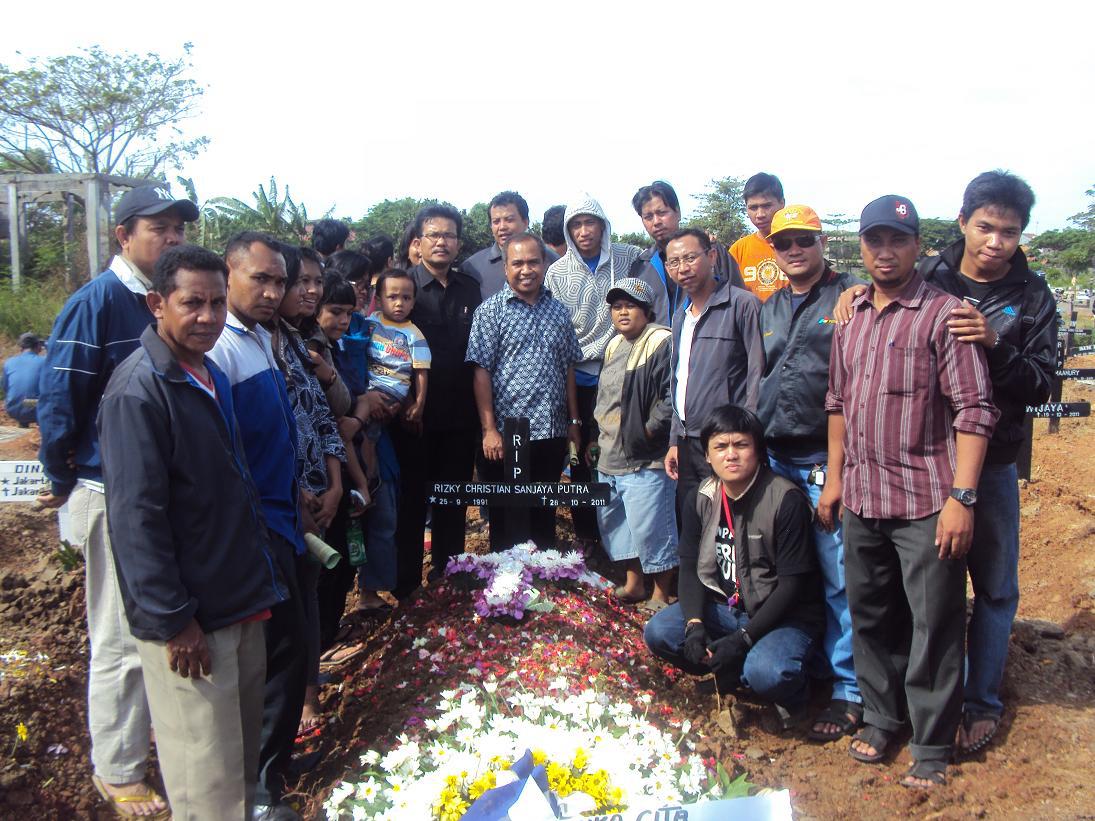 VisionFund Family and others at the funeral. Photo courtesy of Branch Manager, Pak Jacko.

Many members from VFI attended funeral services on Saturday to offer condolences to the family.  The head office is also providing financial assistance to help ease the burden for the family during this tragic time because they know the family will not be receiving any insurance payments.  I was invited to visit the family a few days after the accident with some of the staff from the head office and the branch manager to bring monetary support and to pay our respects.  Though my poor comprehension of Bahasa limited my understanding the words of the family, the image of Rizky’s father breaking down at one point and hugging his son’s batik shirt amidst short bursts of sobs needed no translation.  There sat a heartbroken family trying only to make it through the day.  Rizky’s mother appeared to be strong in the wake of this tragedy, trying to hold the family together.  Throughout our visit she was the first to share moments of laughter and tearful smiles as family members and the branch manager recounted stories about Rizky’s ability to bring joy to others’ lives.

As we sat in the main room of their home I couldn’t help but look around; it appeared that most of the construction had never been finished. The walls were merely cinder blocks cemented together and the floor was gravel left from the construction.  I peered towards the back of the house and saw that there seemed to be one or two bedrooms that had solid flooring and smooth cement partially covering the cinder block walls.  Knowing that they also live in the northern part of Jakarta (which is built on a floodplain, parts of which are a few meters below sea level) made me concerned as the impending rainy season approaches. Already, on the walk through the narrow road to the house, I could see that the stagnant, open sewers lining both sides of the street were only a few centimeters from overflowing.  One heavy, long rain and the street, and most likely their house, would be flooded.

So what will become of the family?  Right now, the oldest brother who has a wife and children of his own will try to help contribute financially, but this will be difficult on his meager salary.  Rizky’s mother will continue baking to try and provide supplemental income to help as well.  They, like many in Jakarta’s outer neighborhoods, can only face one day at a time and pray that there is enough food for the table, fees to pay for schooling, and good health for all of their family.

Through your loans to VFI borrowers, you have supported an inspiring organization that has made the difference in the lives of countless borrowers; today that also includes a family that is still struggling with the question, “Why Rizky?”