Social Gardening a.k.a. 77 is never too old to start a business.

“Poor people are like bonsai trees”, analogises Professor Mohammad Yunus, “Even choosing the best seed of the tallest tree, if you plant it in a small flower pot it cannot grow big. Society is the flower pot, the system we have built that keeps poor people from growing. The seed of the person is as good as the tallest tree, but we must change the system to let each person grow to their potential.”

Whilst Professor Yunus failed to mention that bonsai trees look totally hip on most coffee tables, this is still my all time favourite microfinance analogy.

I was reminded of it today, when I met a good seed.

Mr Zakarias Rassi is a seventy-seven year old Kiva entrepreneur from Baun village, West Timor. He is the group leader of the Cemara C group. I was visiting to do a journal on this group’s progress with their cattle fattening loan, and this was my second meeting with Zakarias. This time, while we were waiting for someone to find his log book, myself and Shanty, the Kiva coordinator, had a nice chat with this talkative and highly entertaining gentleman. 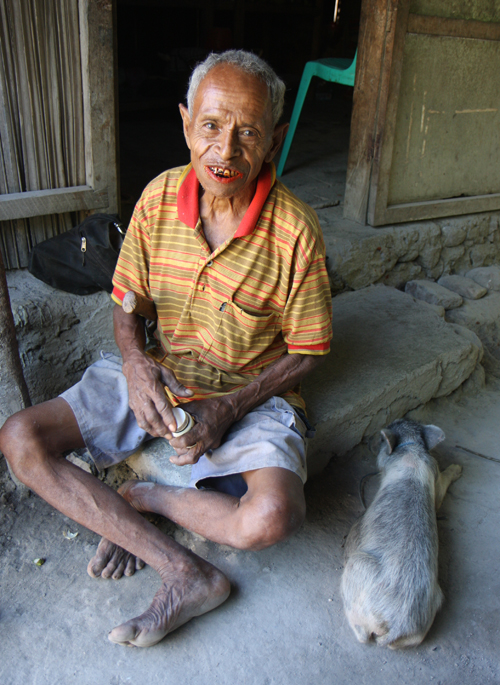 Zakarias stands a modest five-and-a-bit feet above the ground he has spent most of his life earning a living from. His mouth is constantly bright red from chewing on betelnuts (I tried one this week, the most bitter thing I’ve ever tasted) and his sun-beaten leathery brown skin does not do justice to his still clearly nimble and strong body.

We started out with regular journal questions – how is the cow doing, is it getting fat, has it improved your life. He told us that he is a farmer by trade, but that this is his fourth cattle loan from TLM because it is a good way of supplementing his income. With the profit from selling his cows he has been able to buy a pig, send his remaining dependent children to school, and buy new clothes and shoes (no sign of these).

He says that he is able to get loans from TLM because they know he is diligent and intelligent. Of that I have no doubt. After seventy-seven years in a country where life expectancy for men is sixty-six, and still going strong, I guessed old Zakarias had more tricks up his sleeve than just a couple of cattle loans. I asked what they were.

Zakarias told us that he had been a farmer in the same village since he was very young, but that on the side he has had several other business ventures to keep him going. In 1976, when he was in his forties, he started playing the stock market. The livestock market that is! (Sorry Kristy for stealing this excellent pun). He was buying and selling cows and pigs and abiding by the golden rule of trading: buy thin and sell fat. 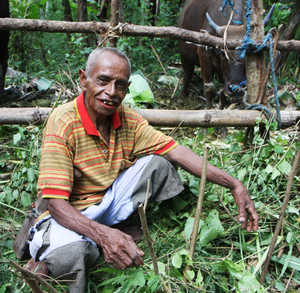 Zakarias with his latest investment

By saving his profits he managed to purchase three houses in his village. He also bought four motorcycles which he lends to his sons who are motor-taxi drivers. I asked if he charges them for the use of the bikes. With a glint in his eye he told us that all revenues are returned to him, and if his sons need to buy anything for themselves, he decides whether to give them the money for it.

Before this he sold rice, vegetables, and fruit. With the proceeds of his current cattle loan, he plans to set up a kiosk and diversify his skill set further. It’s never to late to start something new.

If Zakarias lived in the UK he would probably be a wheeler dealer named Del Boy, a true rags-to-riches tale of hard work and shrewd decisions. But in a village in West Timor, owning three small wooden houses doesn’t equate to holidays in Florida and golf course membership. In fact, Zakarias and his wife still work every day in the fields tending to their crops and livestock, and his house is a tiny dark shack with none of the creature comforts you’d associate with a triple home owner.

Perhaps if Zakarias had lived on the other side of the small mountain range, in Kupang city, he would have several successful businesses and bigger, more luxurious houses by now. Perhaps if he had grown up in the USA, he’d be spending his later years relaxing on his yacht in the Bahamas rather than working in a field.

To expand on Yunus’ analogy, microfinance cannot change where your seed is planted. But it can give you a bigger pot to grow in. And get rid of some of those little ties that stop your branches from sprouting. Kiva and Kiva lenders are helping to make the pots bigger and better, and removing the ties – social gardeners working towards a larger global forest of entrepreneurs.

I now see why Professor Yunus did not expand on his analogy.

Zakarias is an example of how microfinance can reach individuals who really value the opportunity, but also a reminder not to expect miracles. Despite four consecutive loans, a good level of intelligence and diligence – even if he does say so himself – and a lifetime of hard work and saving, Zakarias still works long days in the field and lives in a wooden hut. Mind you, he has supported twelve children.

The real benefits will probably come generations down the line when his children who were able to go to school because of his cattle loans can get better jobs and send their children to university. I wonder if they will realise that it was all down to Great-Grandad Zakarias, the savvy entrepreneur and hard-working farmer from Baun village.

Zakarias is a client of TLM, one of Kiva’s newest field partners in West Timor, Indonesia. To view all TLM clients that are currently fundraising, go here.