We are Kiva Fellows. This is the stuff we like. Here is an insider (often critical, or satirical but always true!) view of what it means to be a Kiva Fellow and promote access to financial services around the world. From party crashing to bazaars to street food, these are the things we like and thrive on. Check out Stuff Kiva Fellows Like (SKFL) #1-9!

I’m not really sure why, but there is something inherently appealing to a Kiva Fellow’s being about food that is prepared, cooked, and sold on the streets. Perhaps it’s the dubiously hygienic food preparation, the alternative cooking apparatus used to bring food to fire, or it’s ready availability and our relative laziness…wait, no, it’s actually our need to literally ‘taste’ the local culture. In our fits of street food deliriousness we are open and ready to taste all that our surroundings have to offer, however, we often find that the local fare may not quietly find a home in our stomachs. Thankfully, before leaving to our local assignments, our travel nurses reminded us that in times of intestinal woe, Cipro and other like antibiotics will be our best friend. They sometimes are, but because we are well versed in the dangers of overusing antibiotics and are haunted by nightmares of creating giant super bacteria that start kidnapping local women and children, we use them sparingly and wisely.

Nevertheless, a Kiva Fellow is not threatened by the possibility of exposure to parasites, e. coli, or anything of it’s kind, and with unready stomachs we take in all the savory goodness that the streets have to offer. Often we eat things without knowing what they are, and when told what they are, we shrug our shoulders and press on. We seek cultural immersion through food; we are bold culinary pioneers.

Kiva Fellows (KFs) LOVE a good party. Food, music, drinks: what’s not to love? KFs are repeat offenders for obvious reasons. They do not consider their behavior to be ill-mannered or inconsiderate: crashing is merely a survival tactic. It can get very lonely in the field and KFs can’t sit and wait for invites to flood their Facebook wall because well, odds are they won’t. So, KFs crash. Weddings, birthdays, retirement celebrations, grocery store inaugurations, TGIF fun, holiday festivities are all fair game. Sure, the KF may not know Marta from accounting or her husband to be, or Adrian the birthday boy, but KFs firmly believe that nothing brings people together like cake. In the pursuit of brotherly love (read: food, music, drinks), KFs show up and wow coworkers and strangers alike with their witty banter and impressive dance moves (moonwalk anyone?). As (invited) party-goers head for home, they are usually heard saying something along the lines of, “That KF is really something.”

The world’s population has just surpassed 7 billion people. Whether we’re boarding a matatu, dala-dala, or ferry, Kiva Fellows are painfully reminded of this fact each time we set out into the field. Public transportation in the developing world usually involves hoards of people, pushing and shoving, all desperately trying to secure a coveted seat. Hesitate, and you’ll end up standing for most of the bumpy ride. Although buses have legal limits, more people pile in at each stop because “there’s always room for one more.” You’re packed in like sardines and it suddenly occurs to you. What wouldn’t you give for a few more inches of personal space? 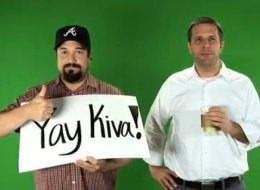 Stuff You Should Know Team howstuffworks.com

You’re living in middle-of-nowhere Perú, or Sierra Leone, or Cambodia. You’re feeling isolated, whether due to your language skills, culture shock, or sheer exhaustion. You’re covered in mosquito bites, your toilet doesn’t work, and you can’t remember the taste of strawberries or what it feels like to not be in 100°F weather. The only English you’ve spoken or heard in three months are your own inane mutterings over PA2‘s most recent tech glitch.

But then, you flip on your iPod. All your troubles slide away as the smooth, calming voice of Ira Glass envelops you. It almost doesn’t matter what Ira is going on about, it just matters that he’s there for you. And it’s not just Ira: it’s the Stuff You Should Know team, the hilarious duo at RadioLab, and maybe a little bit of Prarie Home Companion for posterity’s sake. Meet your new best friends. You’re learning, you’re growing, and you’re keeping yourself sane through the incredible technologies of podcasts. And now that there’s a Stuff You Should Know lending team? Well that’s just gravy.

Kiva Fellows are adventurous, risk taking individuals. They are Xtreme. The natural habitat for the Kiva Fellow is the extreme cold (La Paz), the extreme heat, or the extremely uncomfortable. KFs thrive in new environments, welcome an adventurous BV visit, and like being pushed to the limit physically and mentally. KFs love extreme sports like whitewater rafting in Uganda, volcano boarding, walking around Guayaquil, or canoeing flooded city streets.

Kiva Fellows are extreme but what they like even more is to remind people how extreme they are. They do this by wearing outdoorsy clothes, or accenting their business casual office wardrobe with hardcore Keen gear. KFs also establish their field cred by downplaying how extreme they are. They especially like pretending really shocking things are no big deal. Be it a GIGANTIC earthquake, election violence or sky diving, recounting these harrowing tales always ends in; ‘Oh, but it was really just no big deal…’ 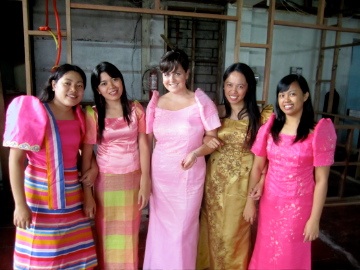 Jill in a Poofy Pink 'Filipiniana'

A Kiva Fellow is lucky if they get an email from their MFI prior to leaving for the field detailing a list of appropriate clothing items to bring. Some fellows get hints like, “at your placement, they are a bit more formal so take a suit” or “you will be visiting agricultural borrowers in remote areas so take durable clothes”. It is not often that you get a “bring a gown because every company event you attend everyone there will be dressed to the nines” so you can imagine my shock when I attended my first work event in the Philippines and everyone is in beautiful gowns called “Filipinianas”.

Every Kiva Fellow knows there is that moment where they can decide to “go native” and we either do as the locals do or we don’t. As fellows we whole heartedly embrace the phrase, “When in Rome…”. With this in mind, I finally traveled to the labrynth of a market to find my own Filipiniana. Initially I had reservations but when I walked into the room in my new bubble gum pink gown, I saw a room full of smiling faces. For this type of reaction, any Kiva fellow would “go native”!

Kiva Fellows like to eat. But not the stuff that made Rob sick, twice! We like good food with weird names such as the Imam fainted, Sultan’s Delight, split belly, angle hair, lady’s thighs, lady’s belly, attractive lady’s lips, priest’s stew, Ali the gentlemen, cigarette pastry, Albanian liver and Lion’s milk (yes too much of it does make you roar!) More than eating strange foods, Kiva Fellows like to take charge and  cook local specialties themselves! Nothing says immersion and cultural understanding more than whipping up a batch of ‘vizier’s fingers’!

The fellow in Turkey is probably the luckiest because of the amazing cuisine available. Turkey has a rich culinary history dating back to the Ottoman Empire. Don’t forget that the Sultan controlled the spice trade crossing his territories so only the best ingredients ended up on his table. Legend says that imperial cooks were rigorously tested for hire solely based on their method of cooking rice, a simple dish. KFs are foodies and have mastered the subtle differences between rice, beans and other simple dishes

As Kiva Fellows, we try to do all we can to support the microentrepreneurs that Kiva has sent us abroad to help. The flip side of that – natural, if you think about it – is that we’re required to feel guilty whenever we shop at an enterprise that is not sufficiently micro. It ruins our field cred. You see, we have been sent out into the world as MICROFINANCE MISSIONARIES!: volunteers who spread the Kiva gospel while leading ascetic lives of self-deprivation that bring us closer to the impoverished societies in which we live. Upscale clothing stores and glitzy shopping malls just don’t square with that self-image.

Luckily, there’s a loophole, and it’s called the bazaar. Vast, labyrinthine, and bursting with local color, the bazaar is packed with every good a Kiva Fellow could need, all sold by hundreds of individual entrepreneurs who are micro enough to earn our attention. The bazaar makes us feel more assimilated just for having stepped inside. Even the word “bazaar” is resonant with exoticism and magic, which means, of course, that it should be dropped into casual conversation as often as possible. “Why yes, I buy all of my shashlyk from the bazaar.” “I found the most amazing Engrish T-shirt at the bazaar yesterday.” “I might be a little late; I need to pick up some apricots from the bazaar after work.” Any one of the above lines is guaranteed to make us at least 20% cooler in the eyes of our developed-world peers.

And of course, as every Kiva Fellow knows, successfully haggling with a microentrepreneur is the number-one way to gain field cred!

Be a part of loans that change lives. Apply to be a Kiva Fellow!

Jim Burke is a Kiva Fellow working with AFODENIC in Nicaragua. When not diligently working on his Kiva deliverables he kills time reading the blog SEAWL. To learn more about Kiva borrowers around the world please visit Kiva.org.