The search for snails and sea cucumbers during low tide at dusk.

As Kiva Fellows, we often make long and arduous journeys to meet borrowers.  During these trips, the discomfort of travel can cause us to lose sight of the uniqueness and beauty of our surroundings.  When crammed into a van, bus, or boat, I’ve often had to crane my neck to check out locations that could serve as the backdrop to a Philippines tourism poster.  While I snap pictures and gape at the postcard-worthy settings here in Bohol, I am not here as a tourist (although there are many tourists here), and the Kiva borrowers who live on the remote Filipino islands I visit are not thinking about jet skis and sundowners.  Therein lies a dichotomy of life in this part of the country:  both a tropical vacation destination and a province that’s in the highest category of poverty incidence in the Philippines.

My most recent business trip was to an archipelago that’s situated a couple of hours off of Bohol’s northern coast.  After taking a public van that would have fit 12 passengers snugly, but was packed with 21 (including a child on the texting driver’s lap), CEVI staff members and I piled into a bangka (outrigger canoe) and set sail into the Camotes Sea. 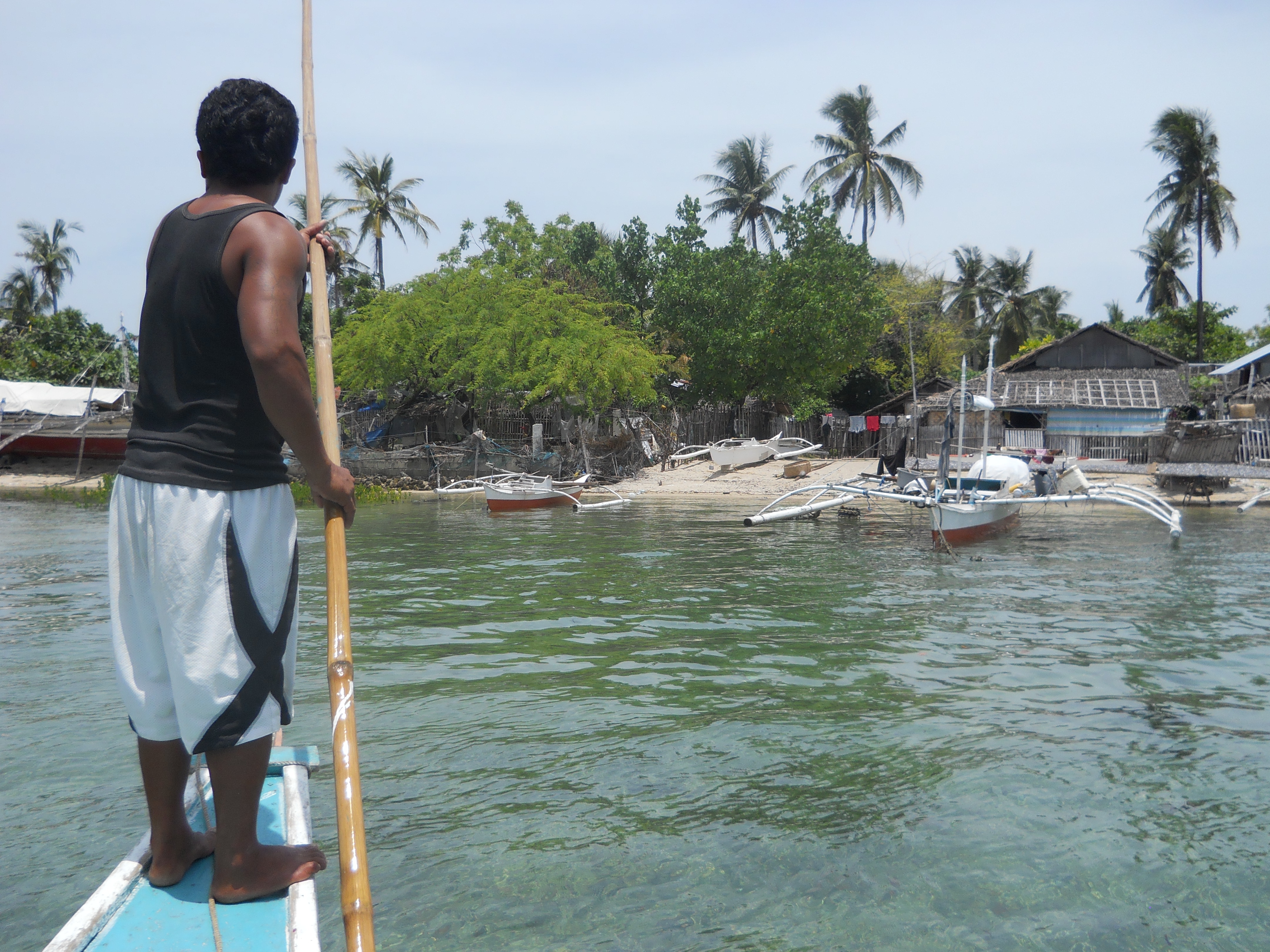 The view from the bangka upon arriving at the islands.

I met Kiva borrowers on three islands in this chain:  Calituban, Guindacpan, and Bilangbilangan Daku.  While on the bangka, I was struck by the serenity of the landscape.  The sea was calm, transparent, and an enchanting turquoise.  At one point a golden sand bar rose out of the water as we neared Calituban.  It looked like a spot where you’d see a Club Med sign and a couple in tropical clothing holding umbrella drinks.  That scene, however, could not have been further from reality.  The residents’ houses were mainly small huts made of bamboo and nipa (a type of palm with long leaves used for thatching) and almost all lacked conveniences we take for granted, including flushable toilets and 24/7 electricity.  The folks who live on these islands must face the economic difficulty that results from geographical isolation and inconsistent access to man-made resources. 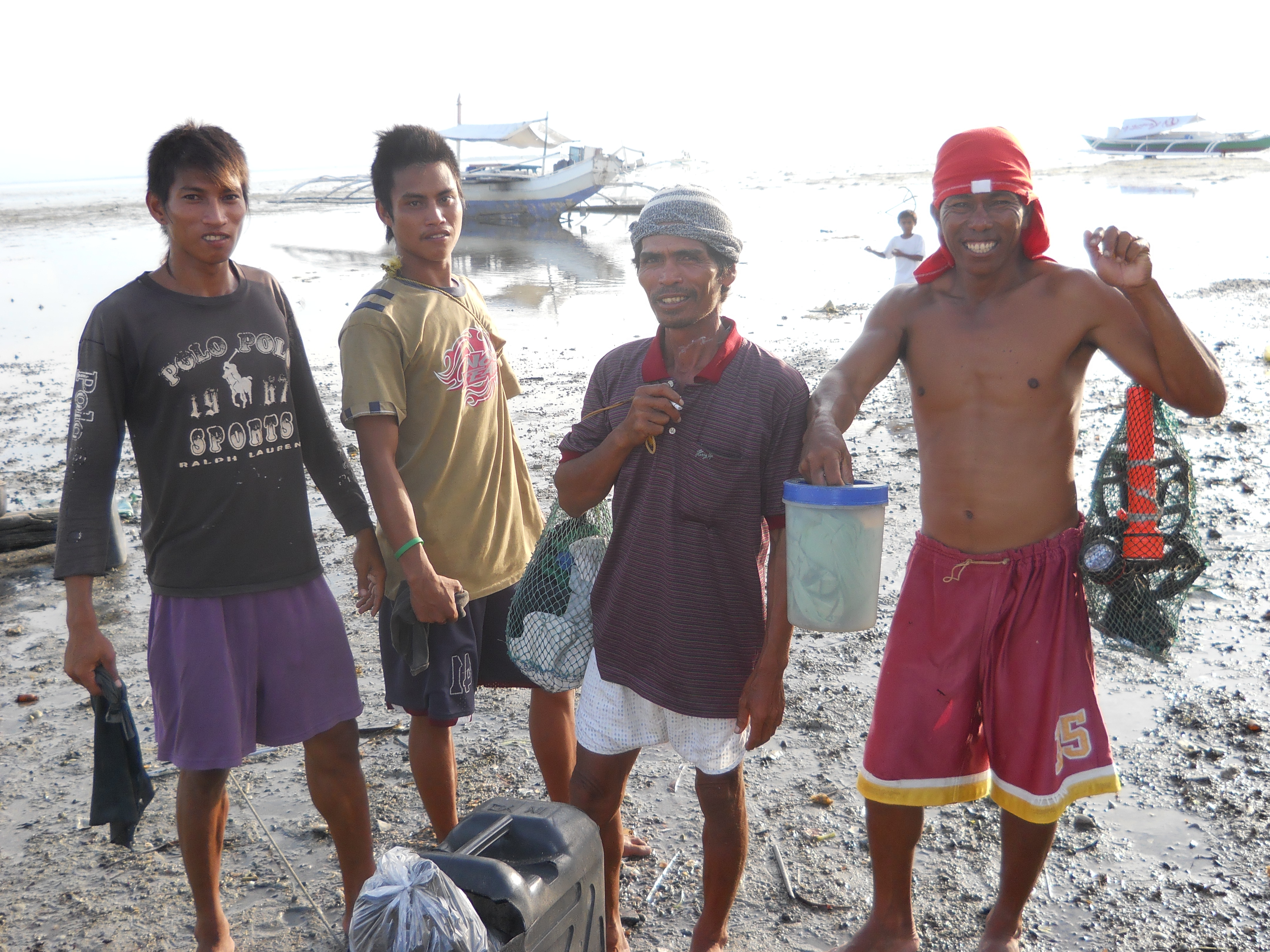 Fishermen getting ready for battle.

The communities in this archipelago subsist off of the resources that the sea provides.  In addition to fishing, seaweed farming is the other primary business here.  The islanders cultivate the seaweed from floating structures, dry it on land, and sell it to middlemen.  The seaweed is ferried to Cebu, where it is exported to countries like Japan.  Interestingly, products such as make-up, medicine, food, and textiles contain seaweed.  I didn’t appreciate the versatility and value of seaweed until visiting Kiva borrowers on these islands.

On Calituban I met Deceluna, who is in the business of buying and selling sea cucumbers.  When we visited her, she was plucking these freshly caught seafloor dwellers out of a bucket and laying them on an open grill for drying.  Other Asian countries, such as South Korea, China, and Japan purchase the sea cucumbers in bulk, where they are a staple in some peoples’ diets and often considered to be an aphrodisiac, which adds to their popularity.  Deceluna told me that she also retains a small quantity for her family to eat.  I was amazed at how she makes a living out of such an exotic animal.  Despite my wonderment, Deceluna took it all in stride.  This is her livelihood, and she does whatever she can to keep it strong, which includes utilizing loans and savings products offered by CEVI.

A fresh batch of sea cucumbers drying over an open fire.

As I met more Kiva borrowers across these beach-fringed, sun-kissed islands, including Antonia, who had just received a fresh batch of barracuda when I arrived, and Alma, a barbequed banana vendor, I realized that my knee-jerk reaction when I arrive in places like this is to be captivated by the beauty, rather than consider the difficulty that often comes with living in such remote locations.  For the people of these islands, the beach stores the fishing boat; it isn’t for tanning.  The sea harvests the food; it isn’t for snorkeling.

A typical backyard in Bilangbilangan Daku.

As a Kiva Fellow, I’ve witnessed what it is really like for those who live in these “exotic” places.  The experience has taught me the importance of not only appreciating where you are, but also who’s there with you.  On your next tropical island vacation, when you’re gazing at a sunset or searching in the sand for shells, please remember to look at what may be right in front of you:  a local community that is being challenged to elevate its standard of living by the very remoteness and beauty that you are enjoying.

The children of Guindacpan were great tour guides.

Jamie Greenthal is a Kiva Fellow working with Community Economic Ventures in Tagbilaran City, Philippines.  Check out the first installment in the “Best Business Trip Ever” series, Part I:  Tagbilaran City to San Roque.