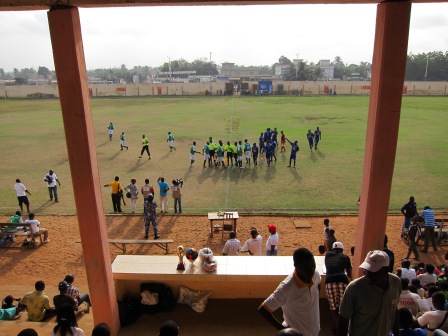 Football: what more needs to be said?

For the past number of weeks I’ve been training with my microfinance institution’s football club, WAGES FC.  Early on in my stay, I found out that most of the male loan officers I was spending my days with were members of the team.  This didn’t surprise me after a certain point: the MFI was interested in placing me with their best agents.  Well-rounded people are generally active in various areas of their lives, and this includes sports.  When I expressed some interest in the team, I was invited out to train with them, for fun, as they said, at 6:30 am, every Saturday.

On record, I don’t play football—or soccer, as it is uniquely called in North America—as a first sport, or second, but maybe fourth, that is after my occasional throwing around a baseball on a lazy summer Sunday.  My first sport, as it were, will always be the martial arts; I then have an unhealthy fascination with basketball, despite my wonky jump shot and little to no hops. 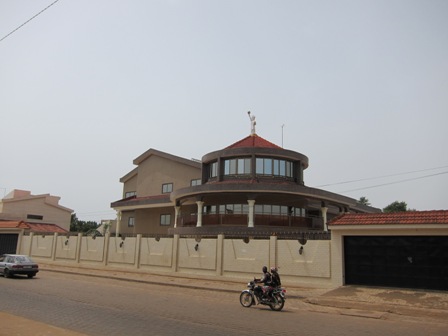 Here is one of the many mansions built by Togolese football star Emmanuel Adebayor, now with the Tottenham Hotspurs in the English Premier League.

WAGES FC is composed of roughly forty active players; the first practice I attended was in a dusty field that lies in the far shadow of Lomé’s Kégué Stadium.  The zemidjan I rode—the name given to the motorcycle taxis here—had a flat en route, and by the time the roadside repair was finished, I was half an hour late for practice. The warmup was ending as I rolled up and as I dismounted I felt eyes flick on and off me.  Too much time has been spent training to know how poorly it is viewed to miss warmup.  Unity is developed through common exercise and in Togo, where morning runs are done in large groups with accompanying drums and whistles, this concept runs deep and wide. 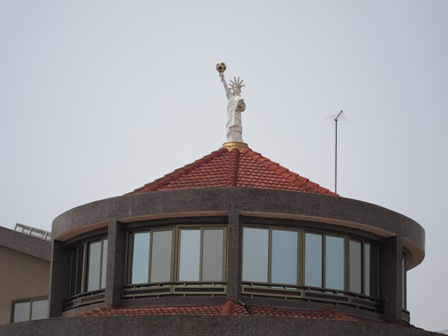 ...and in case no one got the point, the statue drives it home: football has granted him his freedom.

It turns out that WAGES pays for a professional coach to keep the house in order; to this day he barks at me, “yovo!” (white person) to preface his every instruction.  The usual interaction usually goes something along these lines:  “Yovo! The left leg!  The LEFT leg!  Yes!  Well done!”  That’s when he addresses me in French. Otherwise I have to turn to the guy next to me and ask him to reduce a five minute strategy and pep talk given in Ewe to the essential.  I’m also not sure that the coach knows my name; for that matter, I’m not sure that I remember his.  Not that it matters: he’s Coach; I’m Yovo; and that’s about it for the breadth of our relationship. 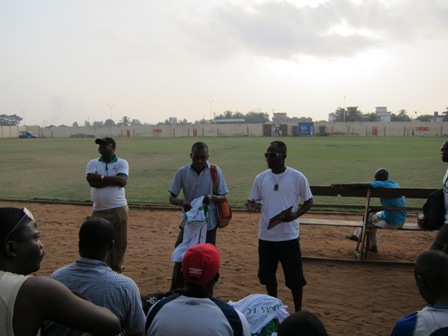 Coach, in style, rallies the team.

At first practice I was asked what position I normally play, and I said defense.  In honesty I don’t have a position; knowing my footwork is laughable and that I hadn’t kicked a football in a few years, defense would allow me exploit my length and bumbling skill set. Everyone around me, meanwhile, has been playing the game continually since they could walk, and the burning I felt on my cheeks had less to do with the fast rising sun than with my nervousness. Coach put me in accordingly as a striker on the left flank and I was duly beaten on each play that I touched the ball.  It didn’t help that the jogging shoes I was wearing had no tread; but excuses don’t really fly. 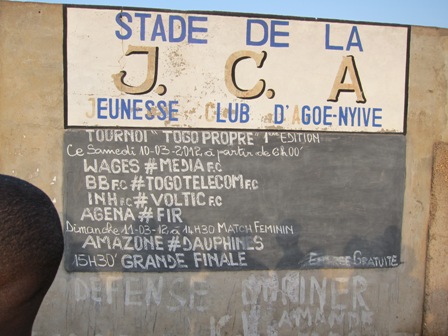 The tournament: some of the other teams, like Media FC, are a collection of players from the newspaper, radio, and television industry; others, like AGENA and FIR, are respectively the national police force and the military's rapid intervention force.

At the end of practice the team lined up into two groups and each player took a penalty shot on goal.  I was instructed to be dead last, and before it was my shot, Coach said something to the team, heads sank and a chorus of groans rippled through them all.  It seems that he had told them that should I not score the team would have to run a lap; if I scored then practice was over.  I fluked a shot that bounced weakly underneath the diving goaltender, and I felt redeemed, if not just plain lucky. 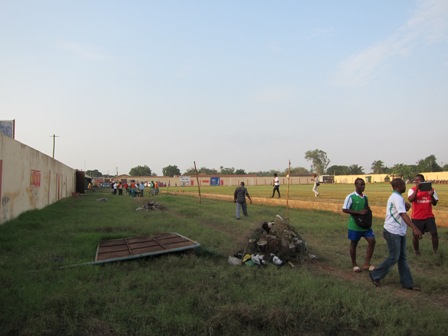 Before the tournament could begin, the teams cleared the field perimeter of litter. It would be interesting to know if development in African nations could be pegged to the amount of plastic waste and polysterene packaging there is by the side of roads. The plastic is in almost all circumstances an imported product and reflects a level of foreign trade and local consumption patterns.

The following Saturday there was a friendly game against the Togolese Army.  It turns out that WAGES FC is well considered on the Lomé football circuit; in 2009, they won their league championship, and the more I learned the more I thought I should stop drinking beer during the week and start waking up at six am and run on the beach before work. I attended the friendly with my new-used bright golden cleats, bought after a decent haggling session in Le Grand Marché, and spent my time warming the far end of the bench.  The match took place at the Islamic Cultural Centre, a beautiful madrasa and mosque set on expansive grounds funded by the late Qadafi, located just west of the even more grand and impressive new Presidential Palace. 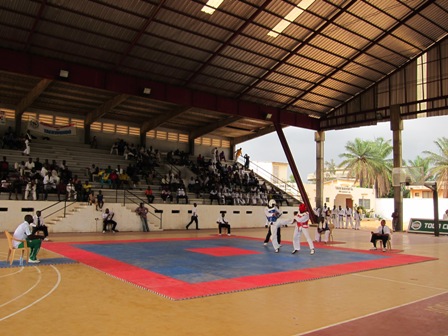 The game was tightly contested, and the Army led by one late in the second half.  WAGES FC had an opportunity to tie things up with a corner kick, which they converted neatly with a bicycle kick executed from deep within the pack in front of the net.  A few minutes later, WAGES FC’s captain was knocked to the ground by an accidental blow to the head that gashed his eyebrow wide open and the game ended soon thereafter. 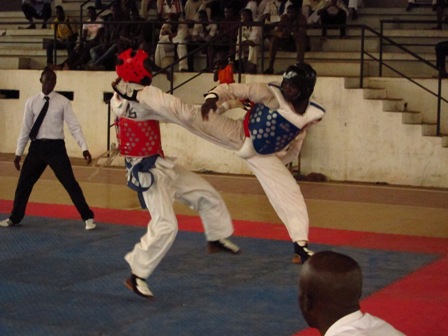 The eventual winner of this fight executes a jump spinning hook kick, an appropriate response to an opponent who led his attack with his head and kept his hands down low.

A month later, I have yet to play in one game; Coach still barks at me with good humoured vim, but I pant less in practice.  Last weekend’s training took place at the beach, and it was a dedicated few that showed up following a disappointing second-round exit in an eight-team tournament the weekend before.  I was sleep deprived and unhappy with life.  As the sun rose we scrimmaged for three rounds; sand got into my shoes forcing blisters on my already beaten feet and I swore that I would never go out again on a Friday night and drink and talk until two am in this forsaken country of beautiful yet capricious women (I blamed the French influence) and cheap high-percentage beer (I blamed the German influence).  Sweat pored off my body; blood ran down one leg from some forgotten clash of limbs; my movements were leaden.

Practice ended and as I limped to the sidelines empty of thought and energy, I was called by my teammates to the ocean, and there we cooled down, struggling to remain standing in the heavy surf of the Gulf of Guinea.  Ultimately, fitness and friendship are all that I’m in it for.  Sport transcends nationalities and cultures, and proves a way to understand more of where I work and who I work with.

Michael Slattery (KF17) is serving as a Kiva Fellow with WAGES in Lomé, Togo. Find a borrower and lend today!