My first work trip with Kiva started early at 4AM on a Sunday and ended with me flying back to Dar es Salaam 5 days later checking a bucket of fresh fish on the airplane.

The goal - train 2 of Tujijenge's branches in the Lake Zone on the Kiva process. 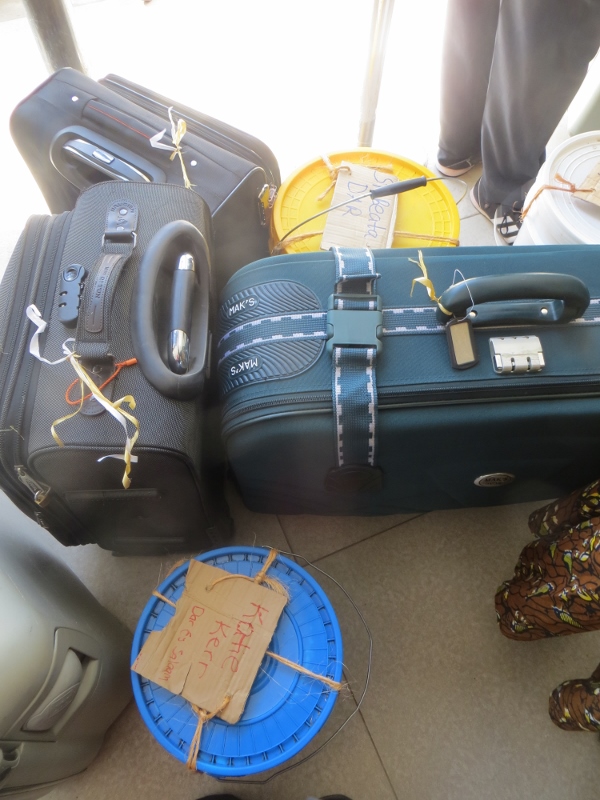 My bucket of fish with other luggage

The taxi picked me up and 4 AM and I was headed to the Lake Zone for 5 days to train 2 branches on the Kiva process with my co-worker Yessya.  Lake Victoria is Africa’s largest lake and the world’s 2nd largest freshwater lake by surface area after Lake Superior.   The lake is shared by Tanzania, Kenya, and Uganda with 49% of it being in Tanzania.  It is inhabited by some of the world’s largest Tilapia.

Tujijenge has 5 branches, but only the 3 branches in Dar Es Salaam were uploading loans to Kiva.   Sometimes as lenders we do not think about how the loans actually get onto Kiva.org.  There are so many loans to choose from and countries and industries that all our thoughts as lenders go to deciding who to loan to, but there is actually a lot of work that goes into posting a loan on Kiva. So it was Yessaya and my task to go to Musoma and Muanza and train the staff on Kiva and the Kiva process.

We landed in Mwanza around 7AM and took a small bus to the main bus station.  We stopped for a quick tea and snack and then boarded a bus to Musoma.  The catch was there is not an offical departing time or schedule.  You basically sit in the bus and wait until it fills up.  Since it was an early Sunday morning we waited about an hour before the bus pulled out of the station to begin our 3 hour journey north.  If you have read my other blogs, you might remember stories of bus rides in Tanzania.  This was a bigger bus in length but it was still very small and my legs barely fit as my co-worker and I almost sat on top of each other.  Although I was squished and hot, the scenery was worth it.  Along the way we passed the Serengeti and even saw a few zebra and wildebeest.  We passed small villages and farms and at each bus stop women would come up to the windows to sell fresh bananas and mangos.  A bunch of bananas was only $0.60 and an entire bag of fresh mangos was going for $1.20. 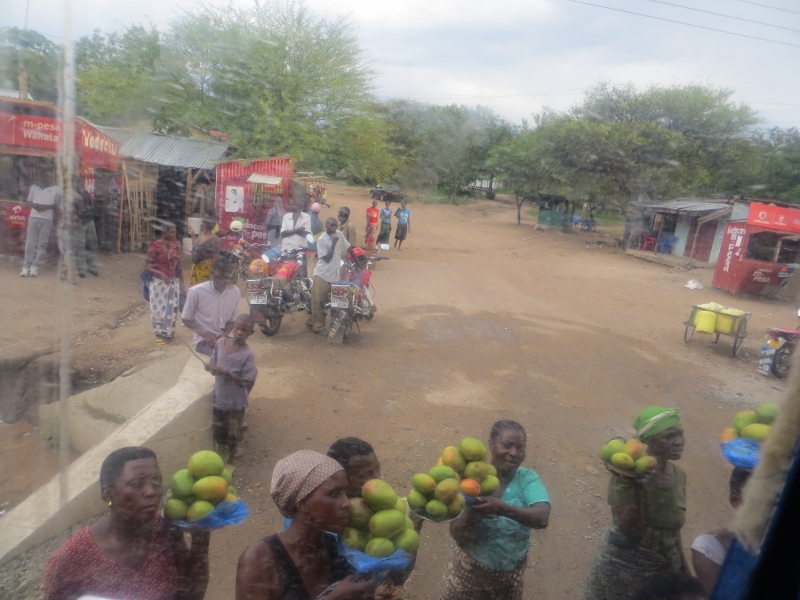 Women with fresh mangos outside the bus 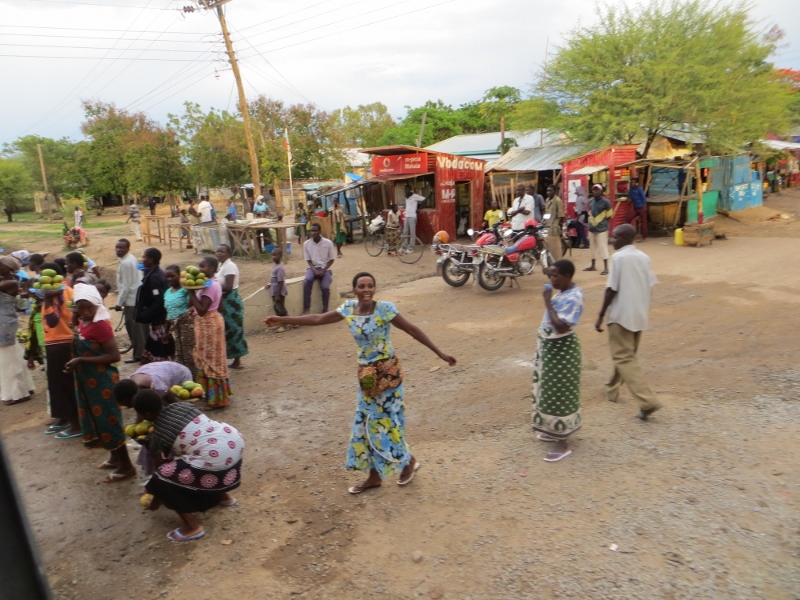 People selling fruit as the bus pulls up

When we arrived in Musoma a member of Tujijenge’s staff, John,  meet us and took us to our hotel.  Musoma is a great little town, the type of place where people smile and say hello as you pass along the street.   I don’t think they see many light skin people because all the kids would shout mzungu  (someone with white skin)  as I walked passed.    It was like they had spotted an exotic created and were excited and had to shout the spotting to others. The excitement at my spotting reminded me of when I saw my first zebra, elephant, or giraffe on a safari.   Everyone came to greet us with a smile.  Kids in the street came up and asked me to take thier photo and then found great joy in seeing the result, asking for me to take photos again and again. 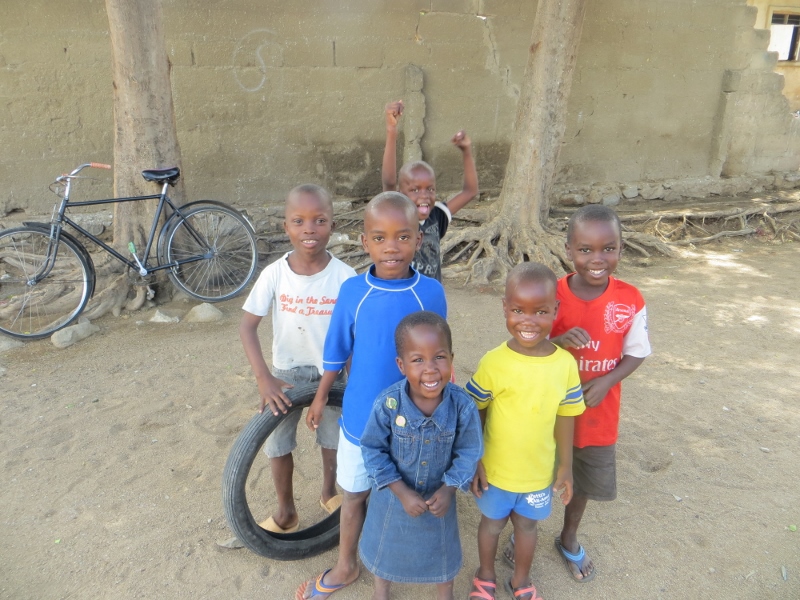 Kids in Musoma asking me to take their photo

Musoma is the capital of the Mara region and the population is approximately 130,000.   Most people make a living from the lake either by selling small fish called dagaa, talipia, or huge fish called nile perch.  Some people even make a living by transporting the fish to Dar es Salaam in cars with specially built freezers.  We spent 2 days in Musoma training the staff and then working with real groups in Musoma that were recieving loans.  I am happy to say we can now see some of the loans on Kiva.org.  Please check them out and loan to a group in Musoma. 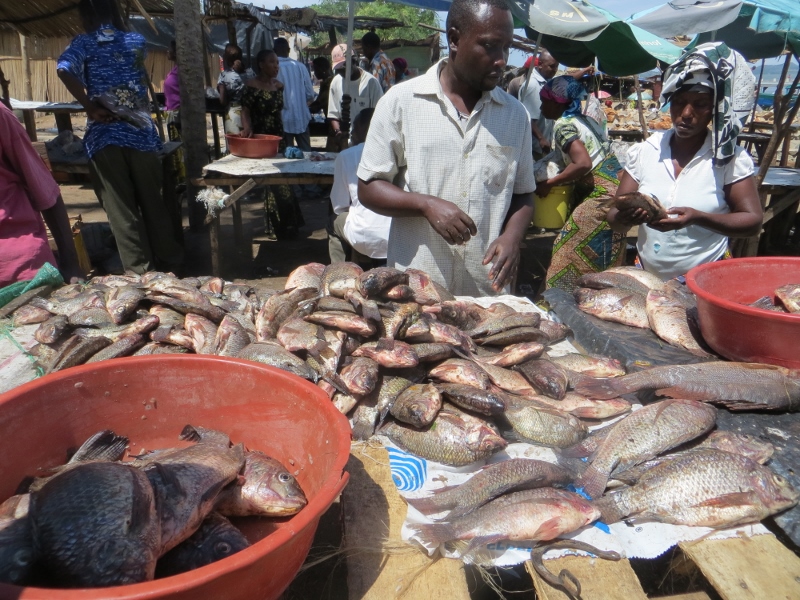 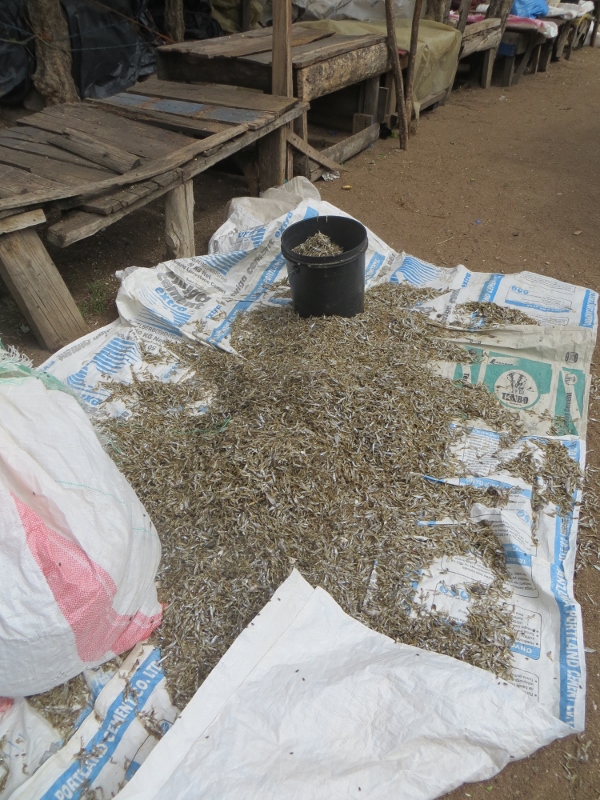 Our next stop was Mwanza.  Mwanza is a medium-sized port city in northwestern Tanzania on the southern shores of Lake Victoria.  Mwanza is the 2nd largest city in Tanzania with a population of 700,000 and it is the capital of the Mwanza region.   The residents mostly make their living by fishing, agriculture, and running small retail shops.   Mwanza felt like a big city compared to Musoma.   There are 2 famous sites in Mwanza – a fish in the middle of the roundabout and some bolders piled high in the lake.  We did as all tourist do and stopped to take photos at both sights. 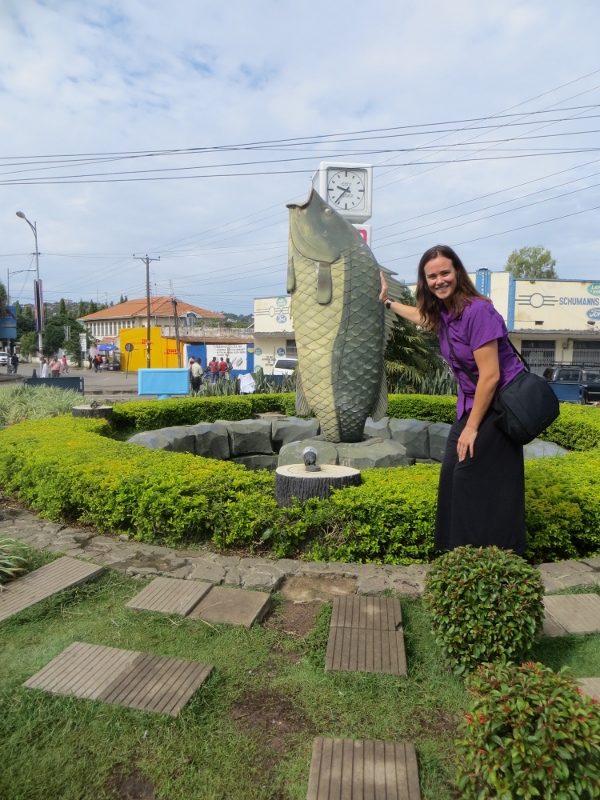 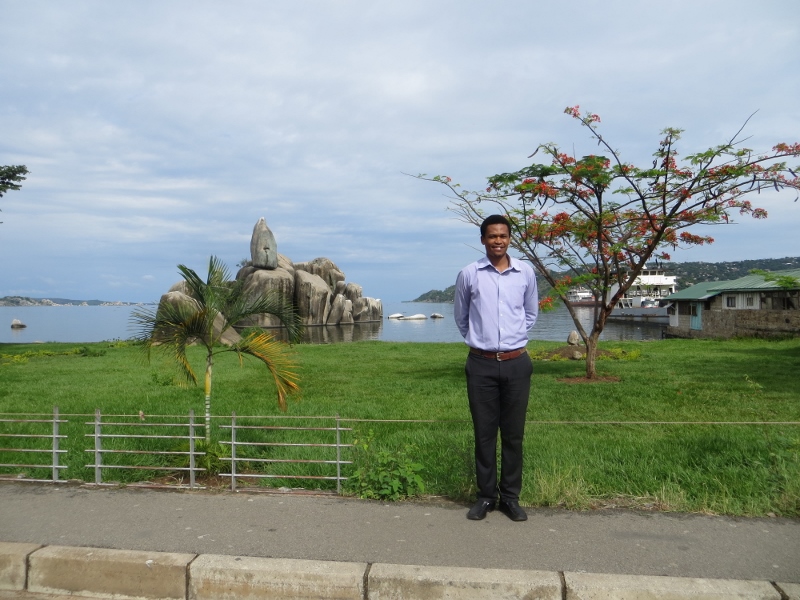 Yessaya with the famous Mwanza rocks

The market in Mwanza is filled with fish and fruits and vegetables.   The fish are caught in the morning and then laid out on tarps in the market to be sold. 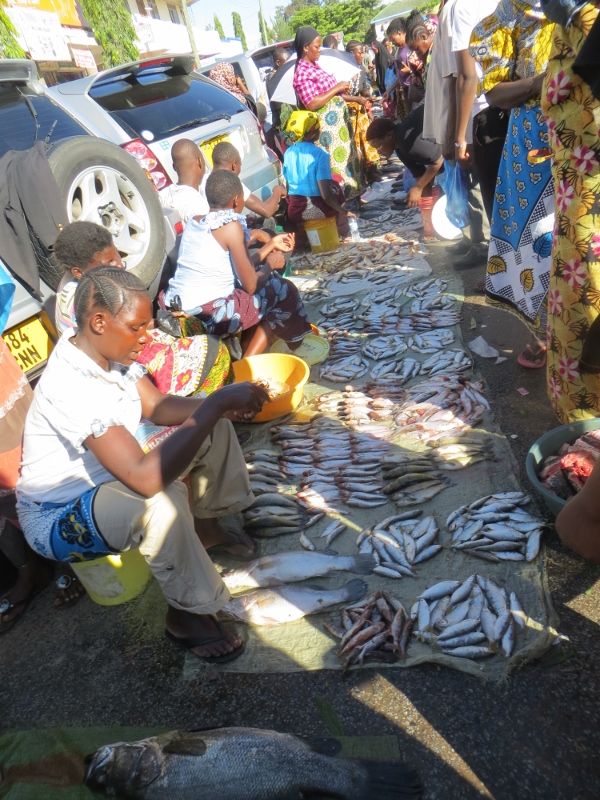 Fish at market in Mwanza 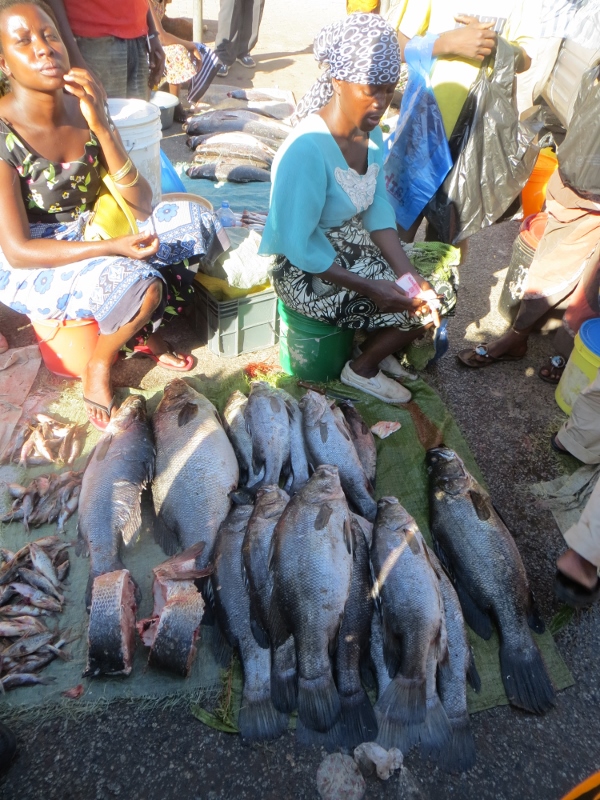 After 2 days of training in Mwanza, it was time to head back to Dar.  The office helped me buy a bucket of fresh fish to take back with me.   Yes that is right,  I checked a bucket of fresh fish just like it was suitcase.   The fish is gutted and cleaned, but the scales are left on to help keep it fresh.  The fish is packed in a bucket with ice.  It is then wrapped in plastic at the airport and tagged like a normal bag.  My bucket was just one among many.  When I landed in Dar es Salaam,  I picked up my bucket of fish from the baggage claim, put it on the push cart, and went to find my taxi driver.    When I opened it at home, we had 10 fish. 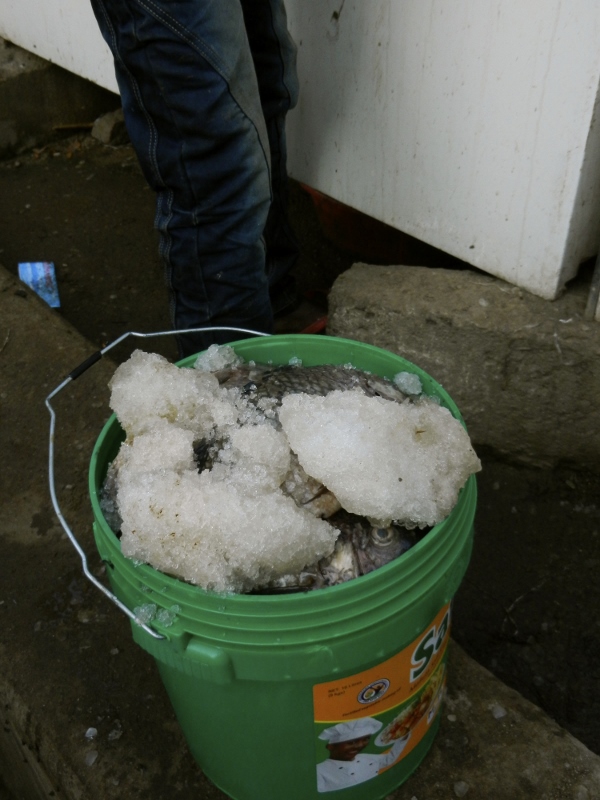 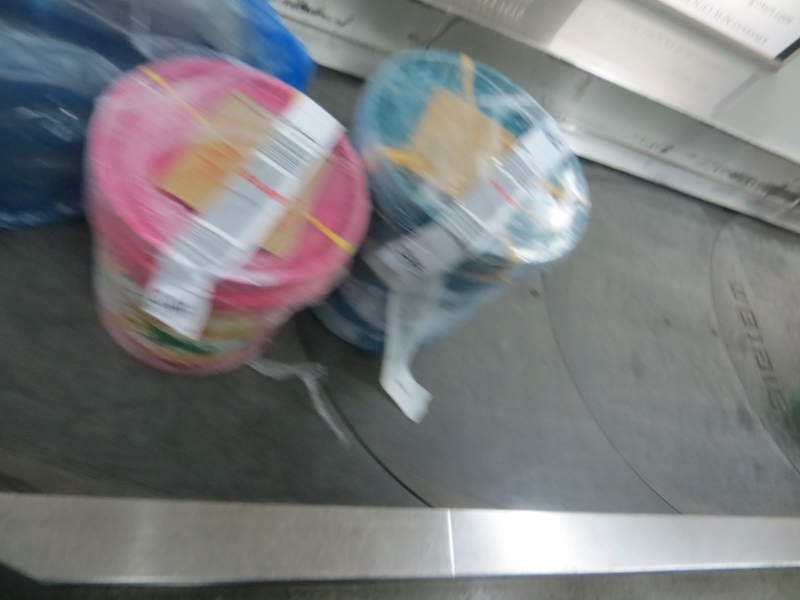 Buckets of fish on baggage carosel 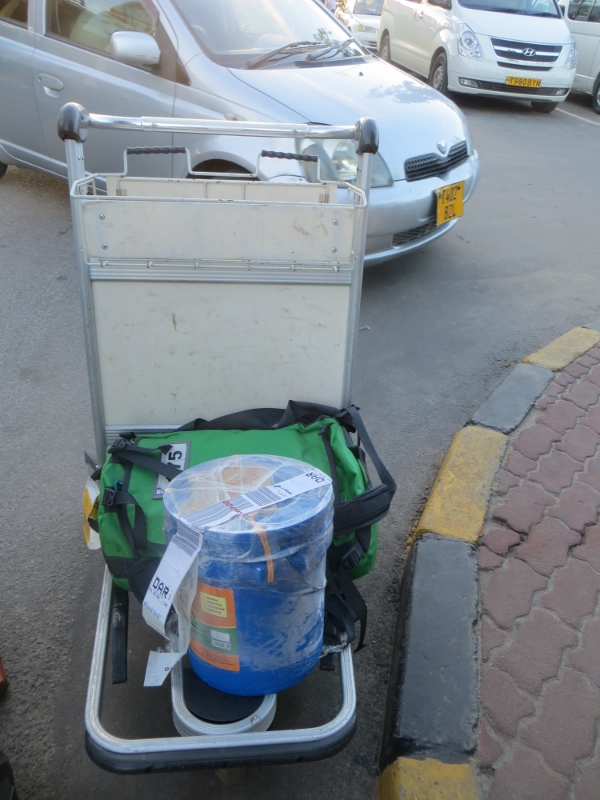 My luggage cart - a bag and my bucket of fish

The highlights of the trip were meeting the other staff at Tujijenge, visting new areas of Tanzania, seeing the work we did go live on Kiva.org, and eating a lot of talipia.   The fish is boiled or fried, served whole or in parts, and in stews or on sticks.  We ate it for lunch and dinner every day and it was delicious.

Overall it was a successul and great trip.  I am happy I had to opportunity to travel to the Lake Zone and work with other branches of Tujijenge. 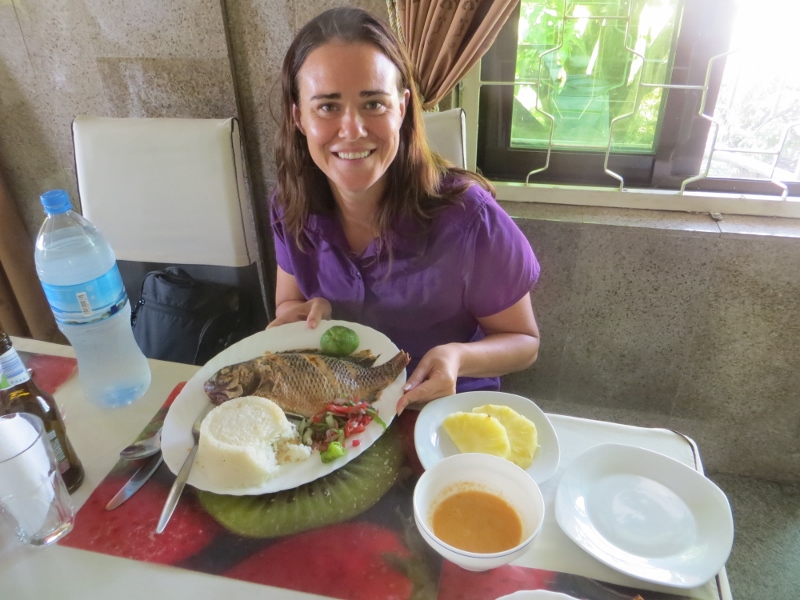 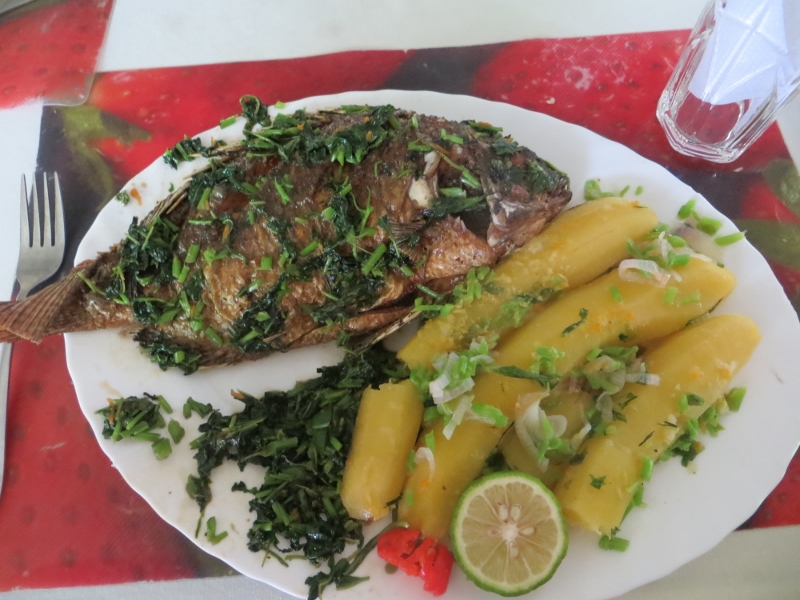 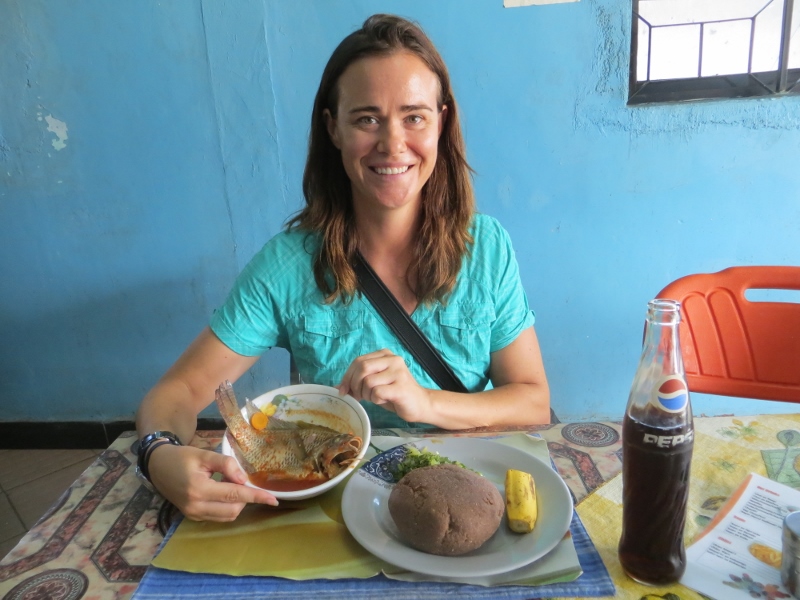 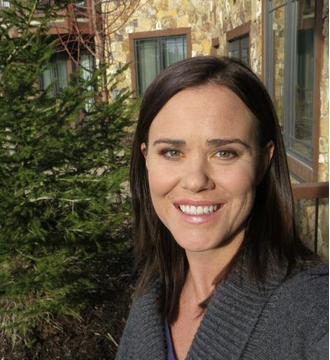 Katie is from Lexington, Kentucky and currently lives in New York City. She is passionate about travelling and is always planning her next adventure. After completing a bachelor’s degree in Business, Katie worked in London and Australia and led outdoor adventure trips for teenagers around the globe. Before moving to NYC, she worked at the 2006 Olympics, volunteered in Guatemala on a sustainable development project, and spent a year in France during graduate school. While in graduate school, as part of her dual MBA / Diplomacy degree, she was introduced to microfinance and has been searching for ways to stay involved and learn more. KF22 is the perfect answer! Katie currently participates in the LEADers program with Women’s World Banking and had the opportunity to travel to Ghana in 2011 to meet with the central bank, local regulators, and clients of WWB network institutions. For the last 6 years, Katie has worked at Bank of America focusing the last 3 years on Liquidity Risk. Katie has been to over 50 countries and is excited for a new adventure in Tanzania. She is looking forward to the opportunity to apply her experience to help alleviate poverty.