A cool two-hour drive downriver from the still-entombed (yet unstable) Chernobyl nuclear disaster site stands Ukraine's capital city Kyiv (Kiev). As with most cities at this latitude, it's sweltering during the summer and many residents don't have air conditioning. Those who live outside the city, however, are able to endure the heat more easily.

For the last two months I've been living at a dacha, or cottage, where my parents-in-law live. 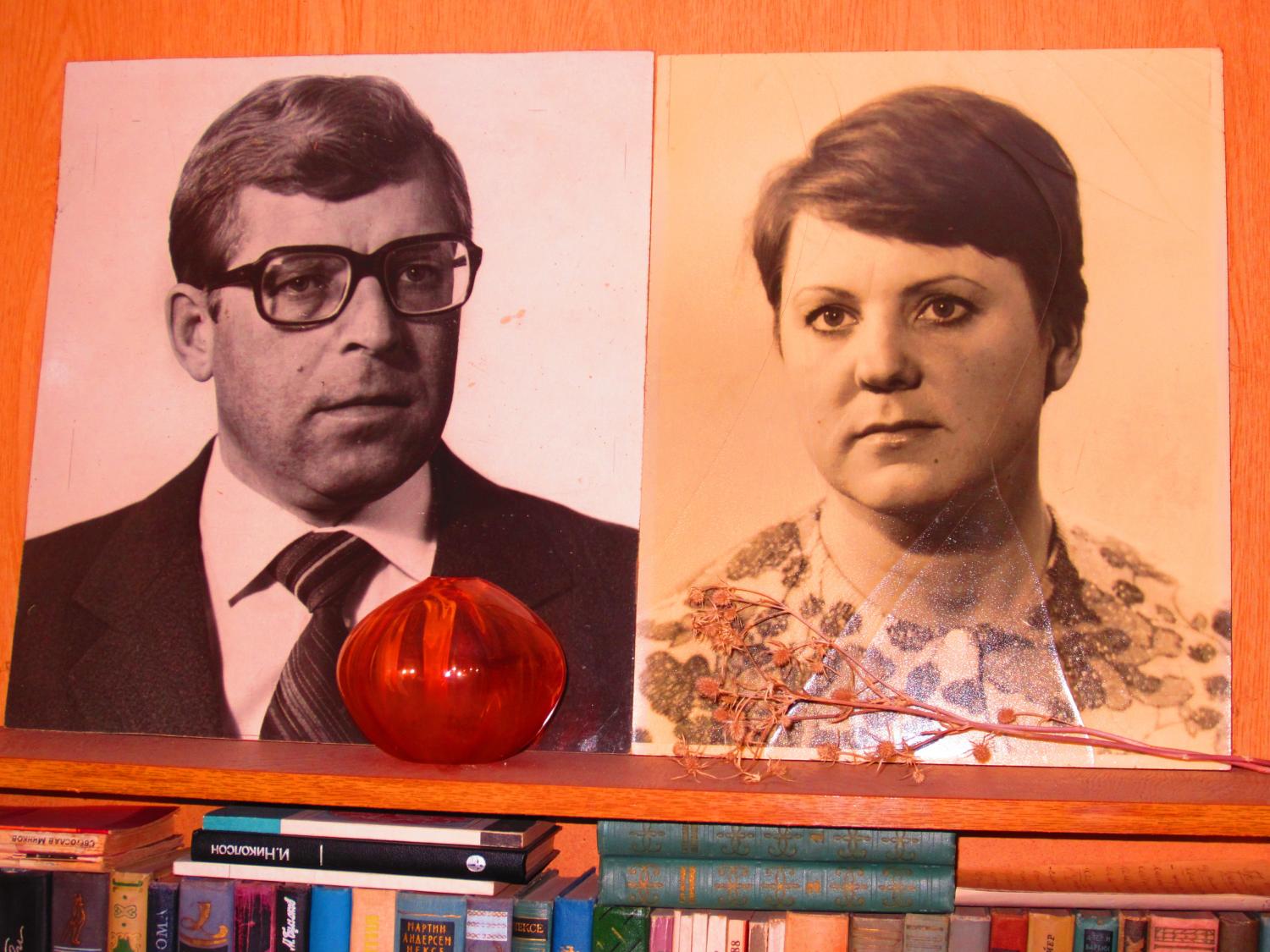 My parents-in-law, Vasiliy and Nina, in their younger years.

Vasiliy and Nina are part of a very small group of Ukrainians that did moderately well for themselves during the Soviet period. They now fall into the narrow category of middle class, by Ukrainian standards. Along with the upper crust of Ukrainian society, they use their dachas as an escape from the heat of city apartments in the summer. For most Ukrainians, however, houses like this dacha are a year-round home. 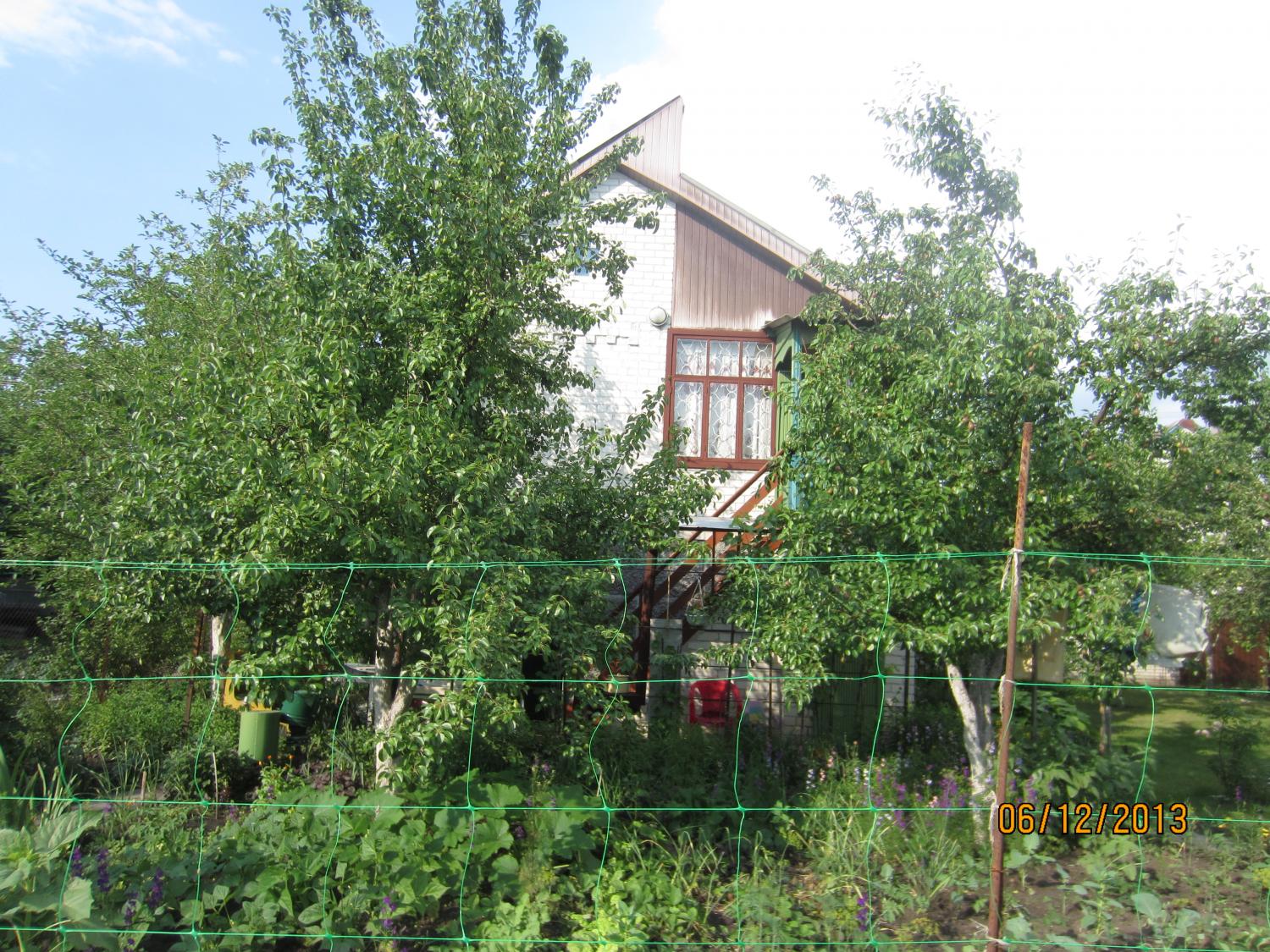 Here is a list of the most important things to know if you want to live at a dacha and experience the closest thing possible to traveling back in time.

1. Many dachas, including this one, don’t have indoor plumbing...or heating.

It’s strange living in a building with no sinks or bathrooms. I feel like I’ve been transported back to the days of Downton Abbey, except that there aren’t any servants and everyone speaks Russian or Ukrainian. As for cooking, we use hot plates when there’s electricity, and an outdoor woodstove when there isn’t.

When it’s cold outside, you need to use the old cast-iron stove built into the center of the house:

We use an outhouse during the day and a bucket at night for water-closet needs. 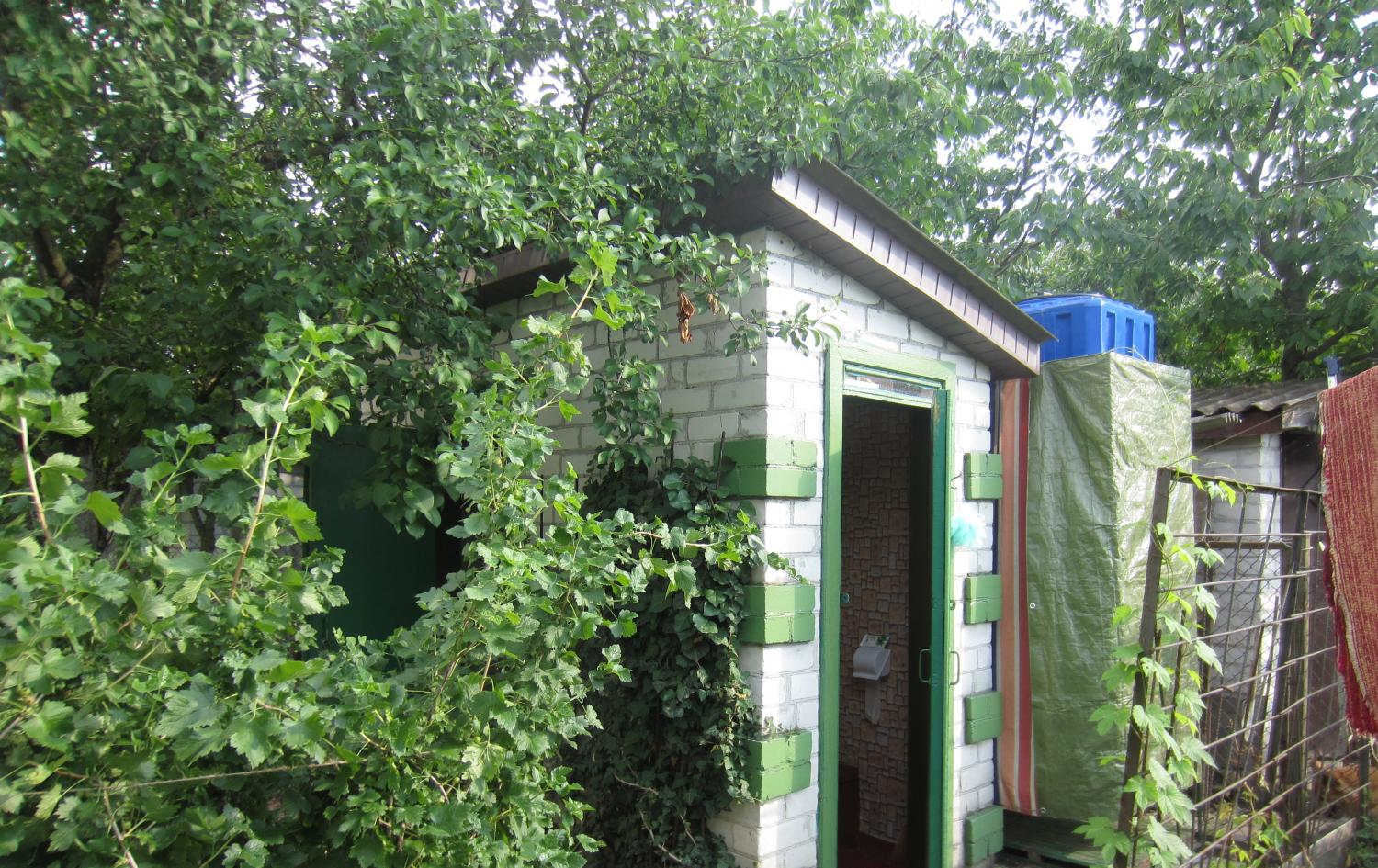 As for hand-washing and dishwashing, we use a hand-pumped well on their land to fill up buckets, which are then used to fill up a small tank they built above an outdoor sink. 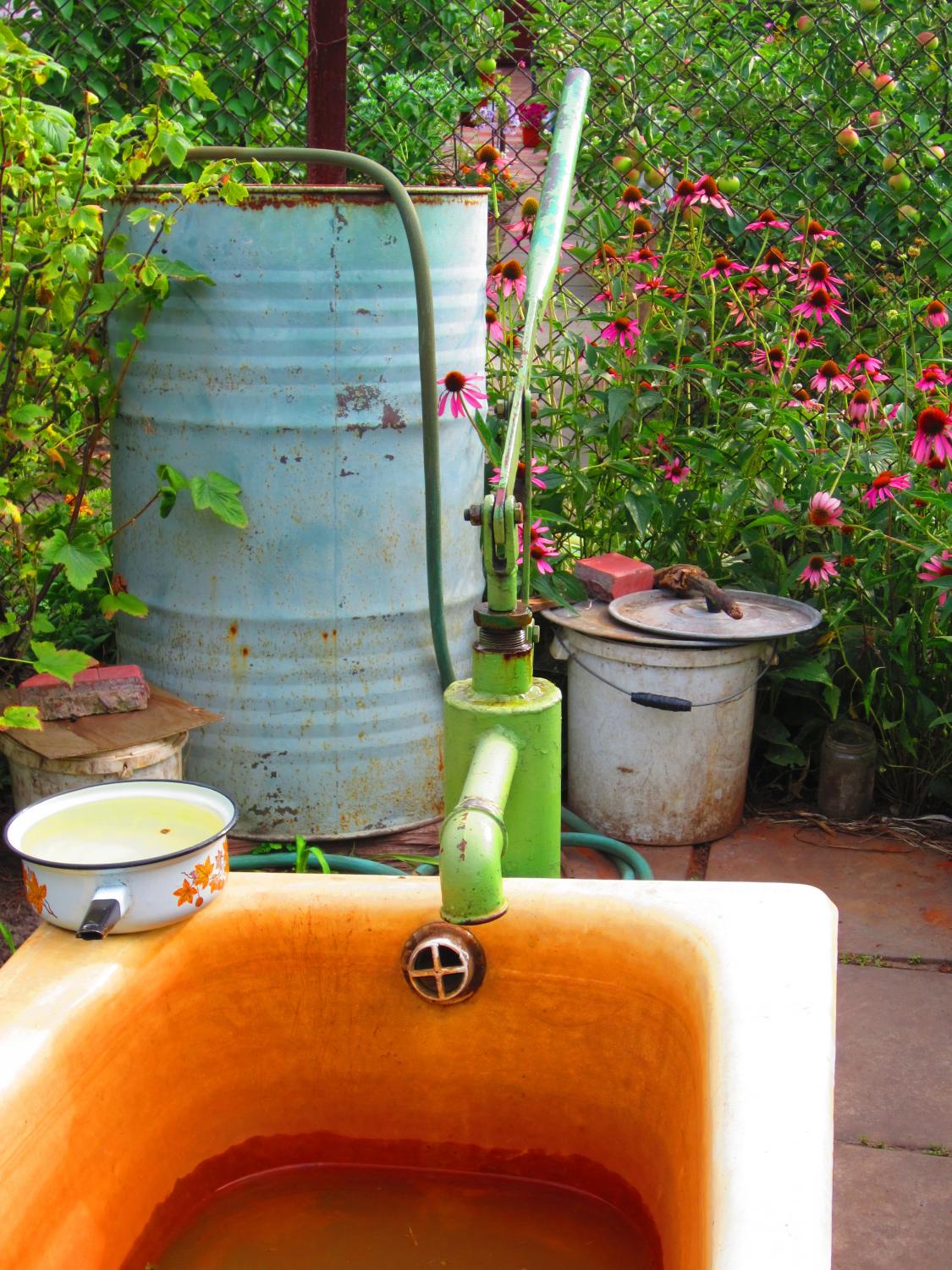 The well feeds excess water into an old bathtub they repurposed. 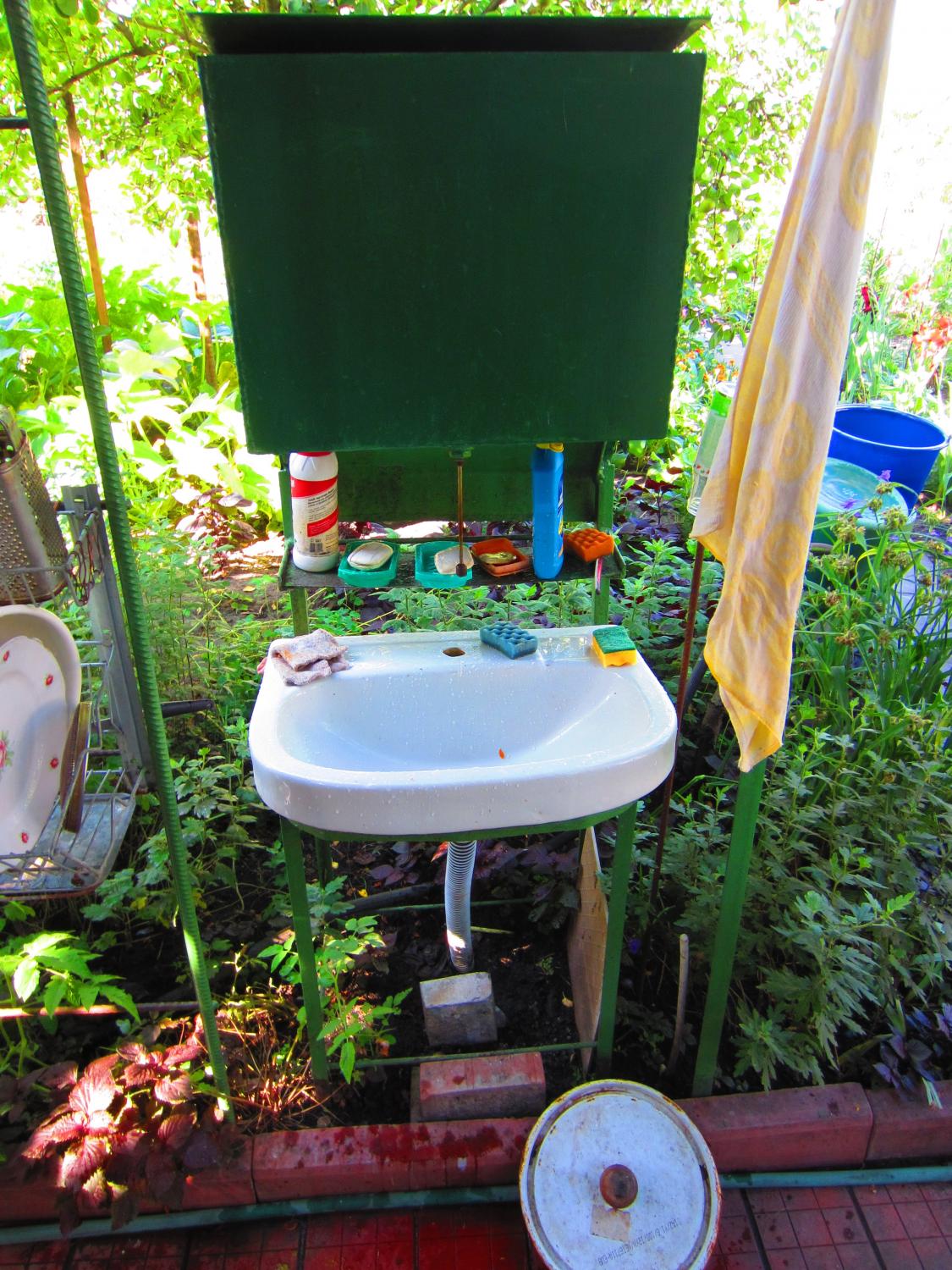 The outdoor sink on a makeshift metal frame with a metal tank above. It's pretty ingenius. You need to push up on the rod hanging down from the tank to release water.

This well doesn't run deep enough to be able to consume the water, however, so they have to collect water at another well about half a mile away, once a day, for cooking and drinking.

An example of pumping well water: My wife gave this well in the city her best shot (she's no weakling) and it took her a couple minutes to fill the bucket. Yes, even city dwellers have to pump their own water. Drinking straight from the faucet is a luxury not possible in Ukraine.

During the last outage this week, which lasted for a day, Vasiliy pulled out this old kerosene lamp, with a glass cover, for me to use. The whole room smelled like kerosene all night, but it was an amazing experience to feel like the time travel experience was finally complete. 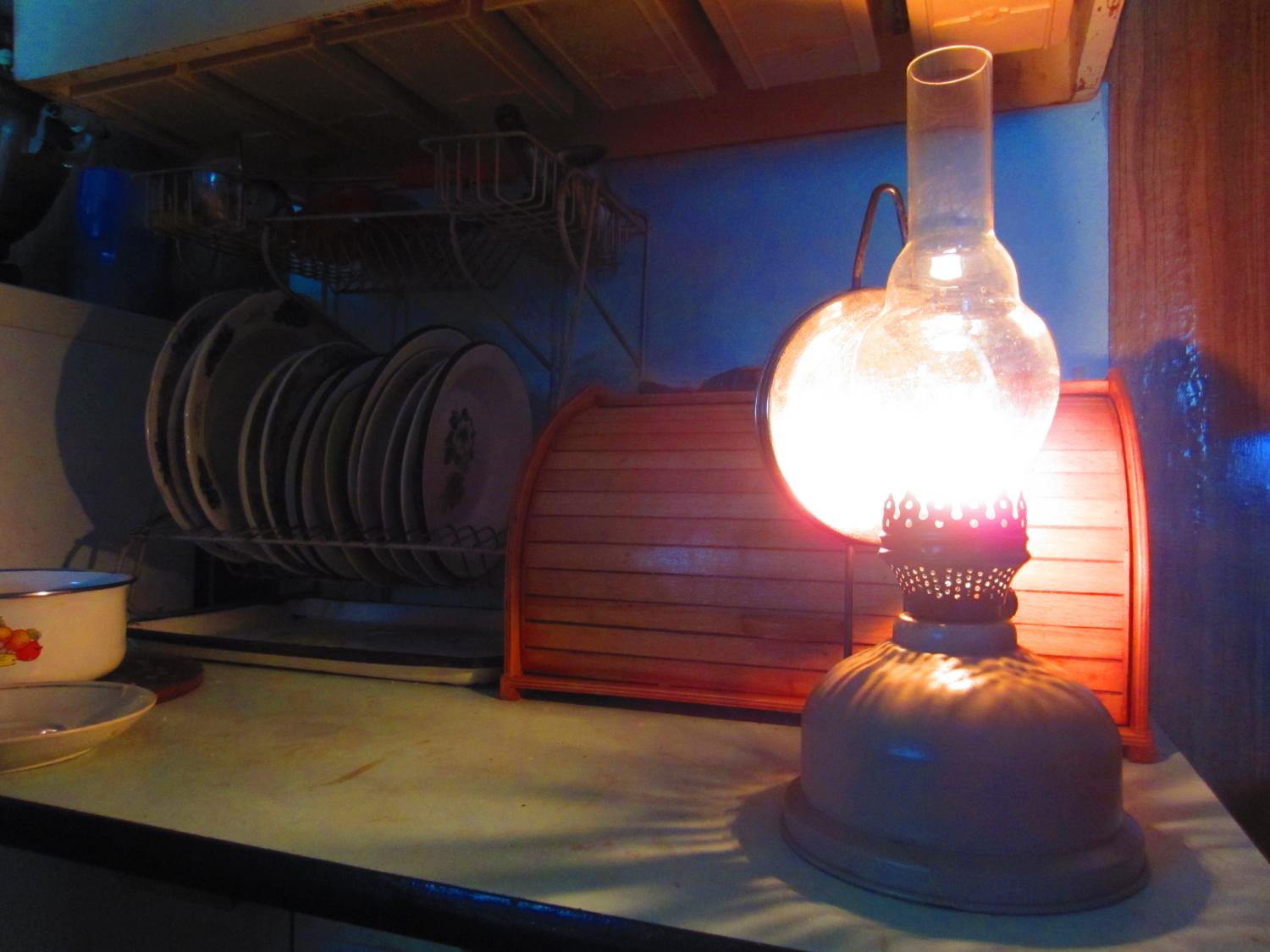 A sampling of breakfasts I've had at the dacha thus far: 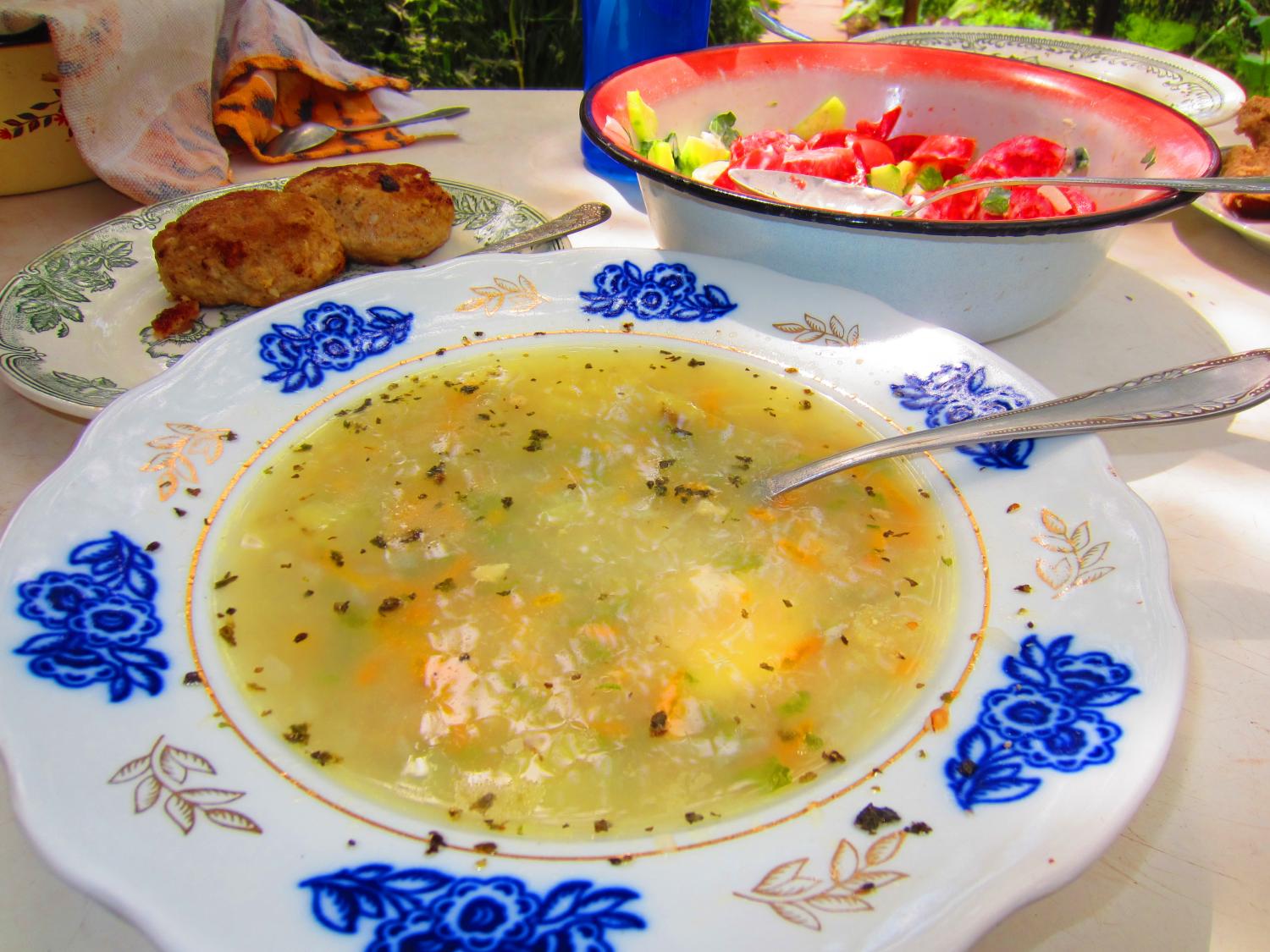 Potato soup with buckwheat, "cutlets" (fried hamburger mixed with bread), and a tomato and cucumber salad. 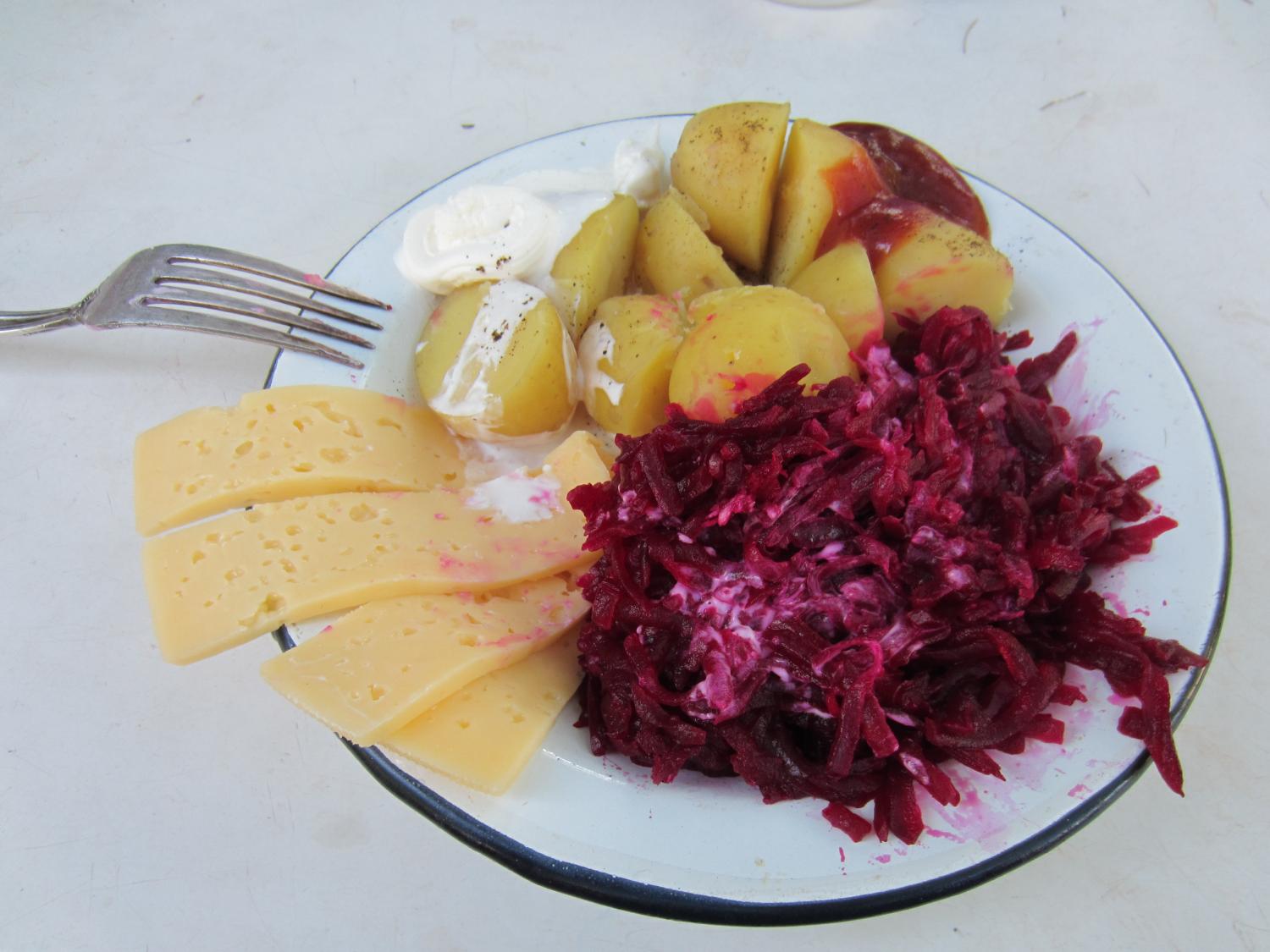 4. Forget everything you thought you knew about taking a shower.

Vasiliy and Nina made an outdoor shower last year, for visitors only. You might think that this would make the whole process of bathing much easier than sponge bathing, but you'd be mistaken. 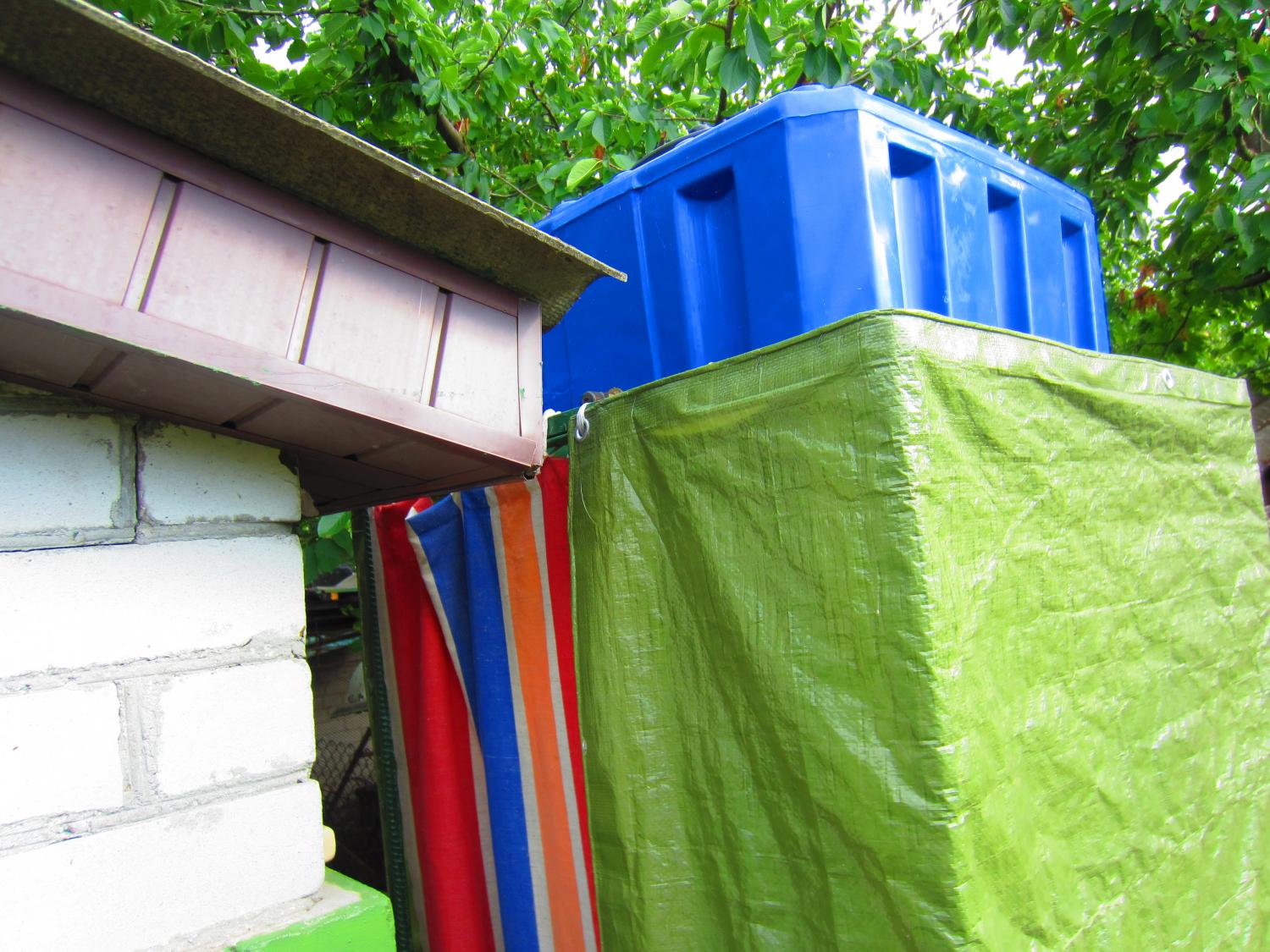 Shower on the right, next to the outhouse.

The shower is a metal frame wrapped in a tarp with a 25 gallon drum of water on top that's semi-warmed by the sun during the day. In order to fill up the drum, I have to use the hand-pumped well to fill up a bucket, walk to the other side of the garden, climb a ladder, and carefully pour it into the top of the drum. It takes about 15 buckets to fill the drum, and it takes about 20 pumps on the well to fill up each bucket, so each shower requires about 300 pumps on the well and 15 trips up the ladder, which takes about half an hour or more. This does not include the time and effort needed to heat up a pot of water on the outdoor woodstove, needed to make the shower warm. Without it, the well water pouring down on you is cold enough to make you shiver in the summer. 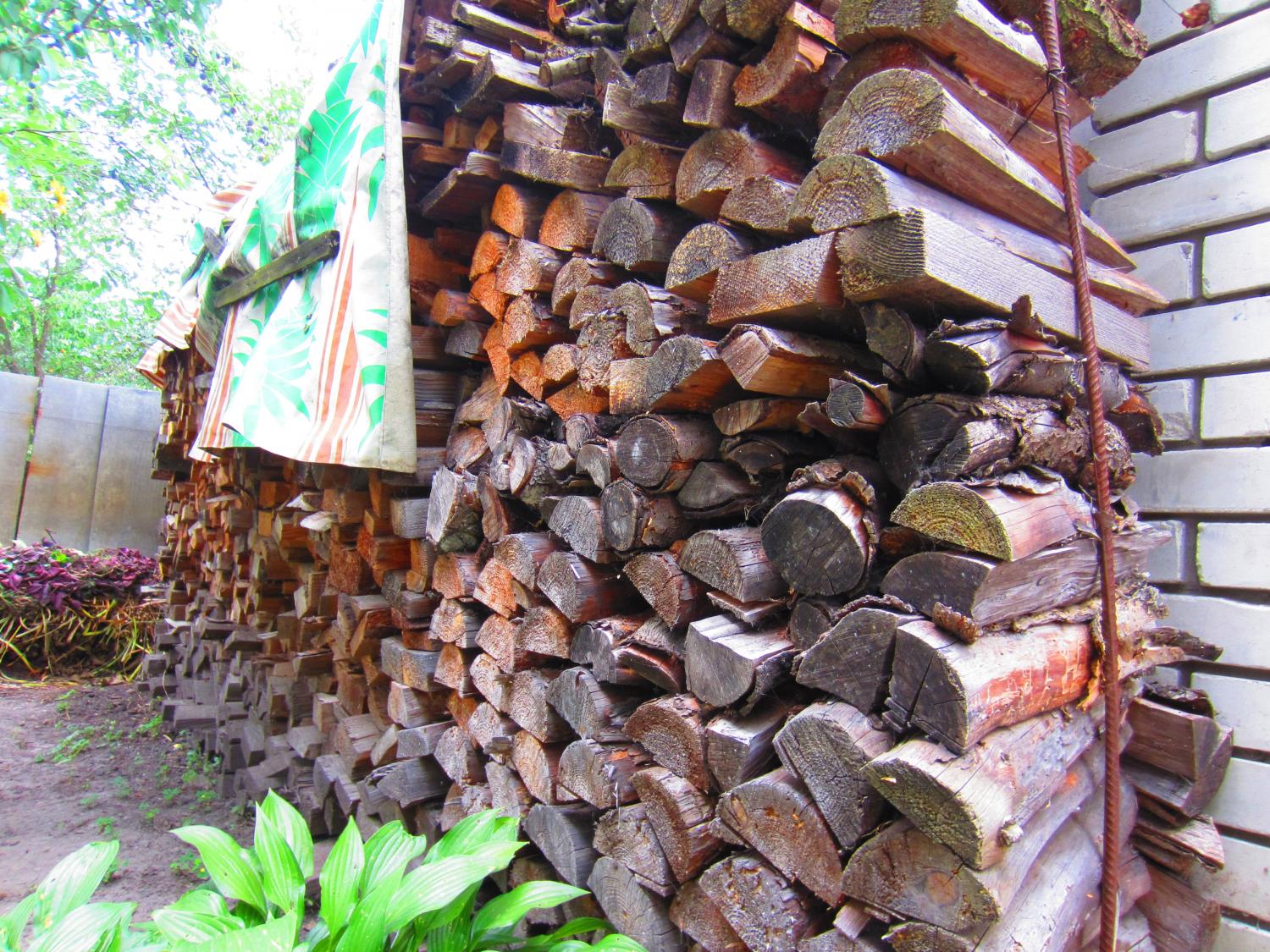 Vasiliy collected and cut this massive pile of firewood himself about 20 years ago and it's still going strong.

Needless to say, after the first shower and tank-refilling ritual, I was even sweatier than before I showered. I was tempted to go out and buy 30 cans of deodorant spray and give up on bathing altogether.

I now understand a bit more why so many people around the world don't (or can't) bathe every day. This is just one of many (seemingly) little conveniences that I take for granted back home, and which makes my fast-paced, efficient American lifestyle possible. If you don't have running water, your bathing, cooking, and cleaning take at least twice as long. This same logic holds true for larger problems, affecting entire regions, as well. For example, the roads are bad, the entire economy suffers.


5. There’s nothing better than a meal made from freshly picked fruits and vegetables. 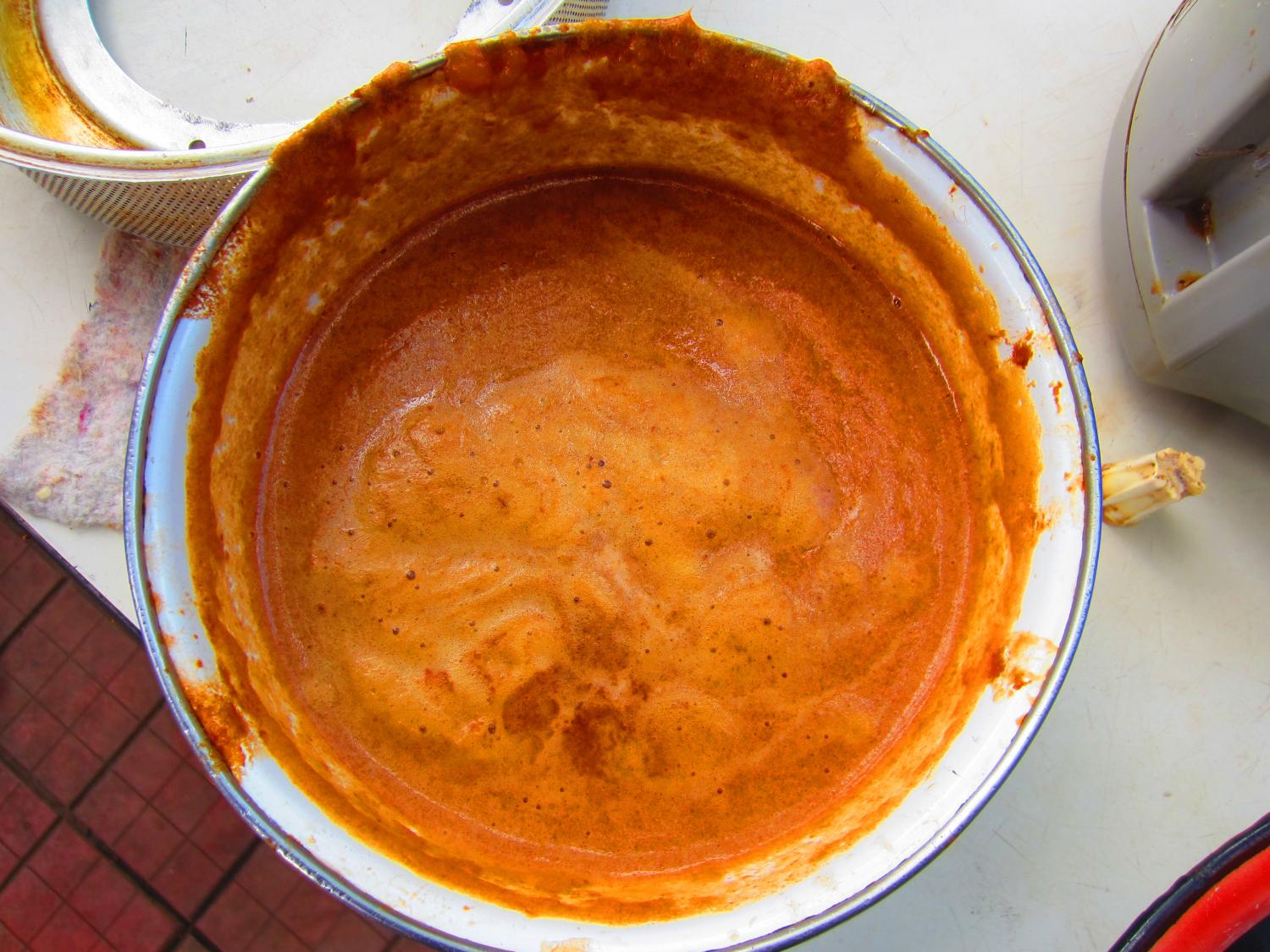 The area around this dacha is near the Dnepr river (Ukraine's main waterway). My parents-in-law, Vasiliy (the Russian version of the name Basil, as in St. Basil’s Cathedral) and Nina have a beautiful little garden here, as well as fruit trees and a small lawn. I’ve already eaten some delicious strawberries, black currant berries, radishes, dill, mint, plums, apricots, and other things, all freshly picked from their garden. 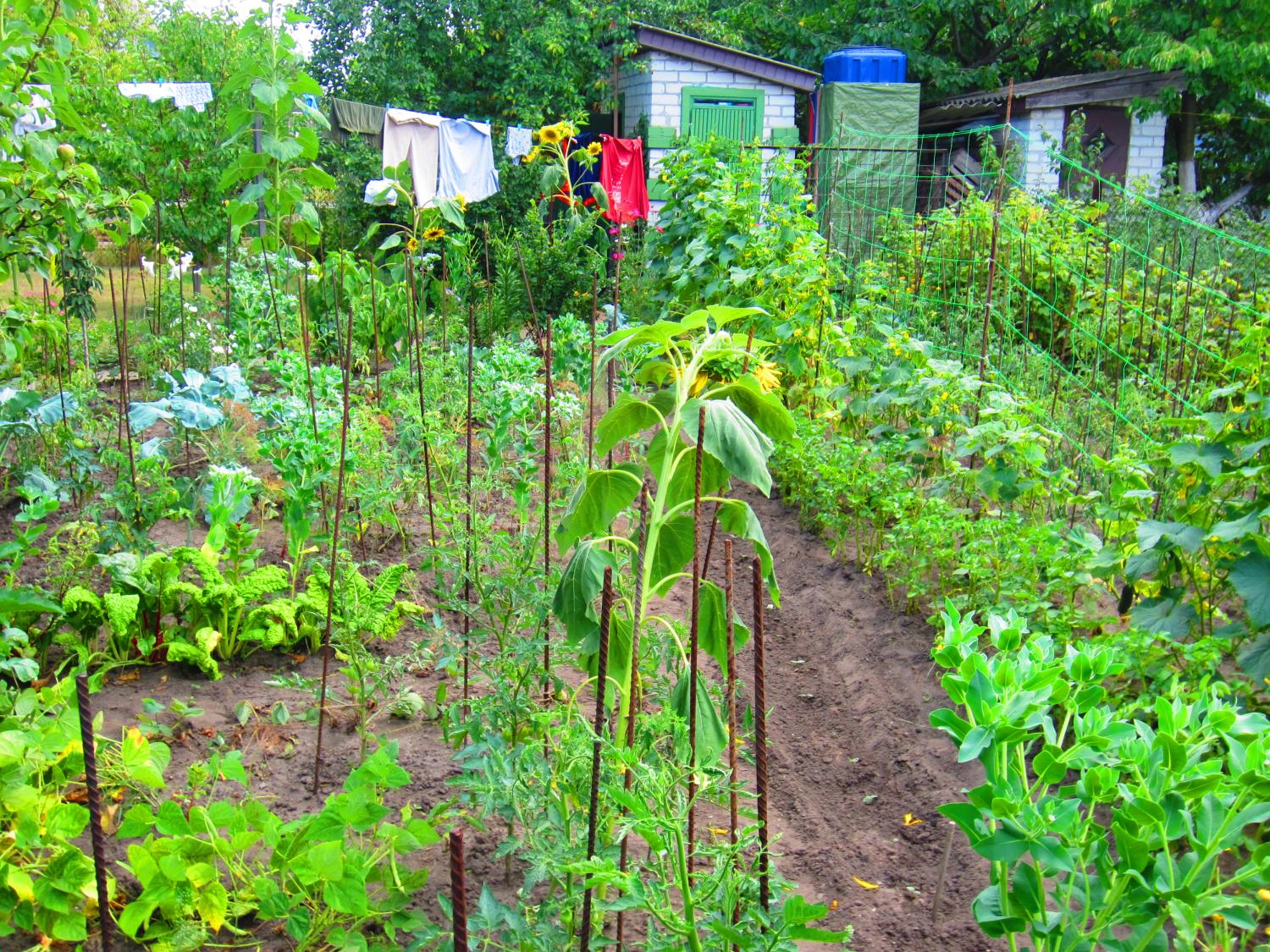 Part of the garden

Their agricultural success is even more impressive because they have very little good soil here. Although generally Ukraine has some of the best soil in the world, known universally in geography textbooks by its Ukrainian name, chernozem (black earth), Vasiliy and Nina were afforded only this small patch of former swamp—about 1/5 of an acre total. They had to bring in several truckloads of topsoil in order to grow anything.

Nina makes us a minimum of three courses for every meal and we eat to our heart’s content. She is a true Ukrainian woman: she does the work of 10 people every day, can lift more with one arm than Arnold Schwarzenegger, never shows fatigue, and entertains the whole family with jokes. She also tells fascinating stories about growing up after the Great War (WWII) and being so poor that her family couldn't even afford underwear. They almost starved to death when she was young. Vasiliy's childhood wasn't much easier, and I see everyday how a deeply instilled sense of frugality and industriousness has penetrated her and Vasiliy's lives from this period.

Nina makes everything by hand, even starch. Before I saw her make it, I had no idea what it even looked like. I only knew that it was in potatoes and used to press shirts. I was absolutely fascinated as she collected potatoes that were too old to eat, ground them up, mixed them with water, collected the stuff at the bottom, put it on a tray and let it dry for a week. She uses it to make jello-like drinks and to mix into other foods. 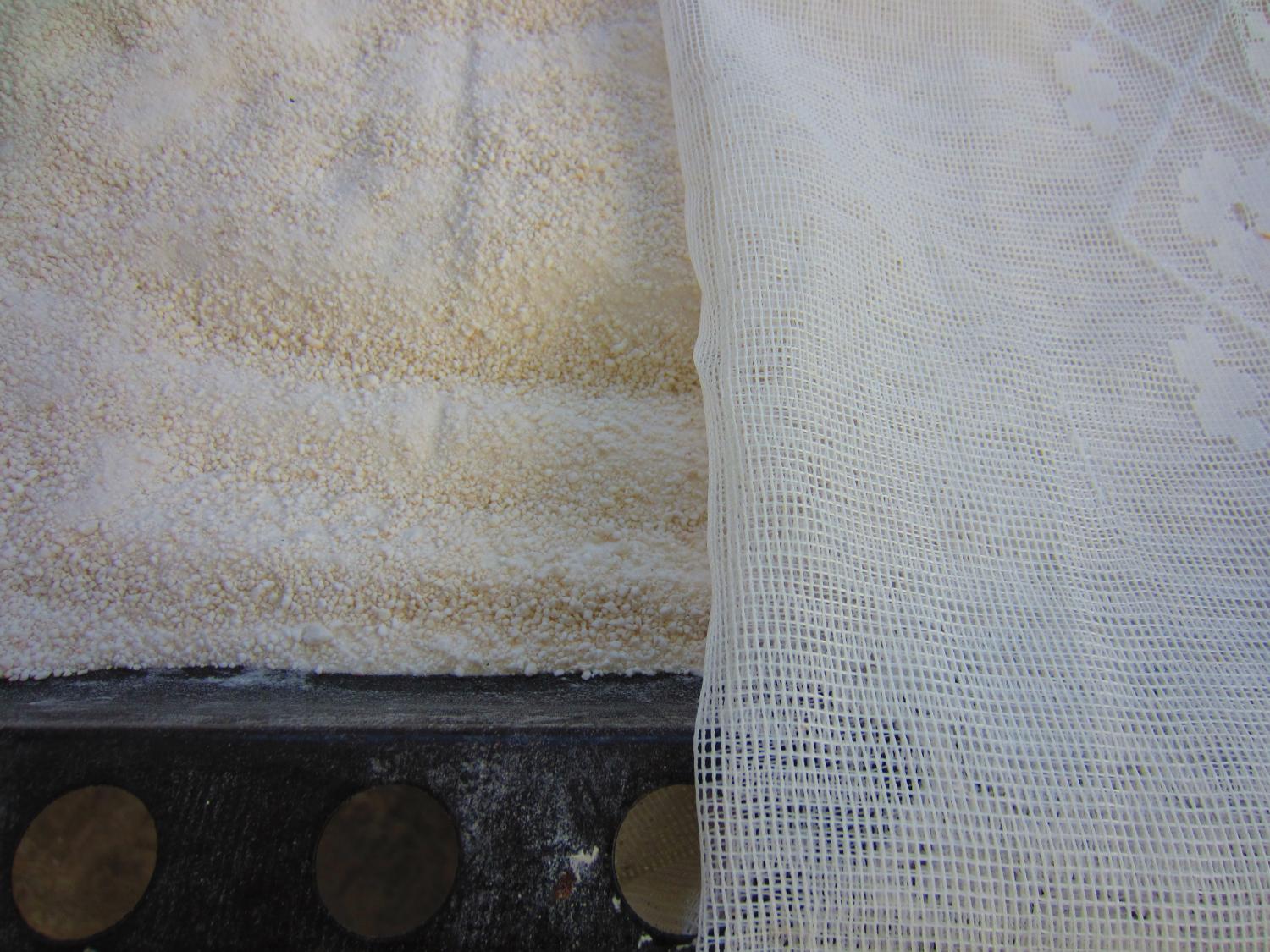 Vasiliy and Nina lived their lives under the Soviet regime, and they still have pictures of Lenin on the walls. But Nina is also somewhat religious and has Russian Orthodox paintings of Christ as well. This may seem ironic, as Lenin was fiercely and militantly anti-religion, but this common occurrence is emblematic of Ukraine’s current struggle to create a national identity. Is it part of the West or the East? Is it atheist or Christian? 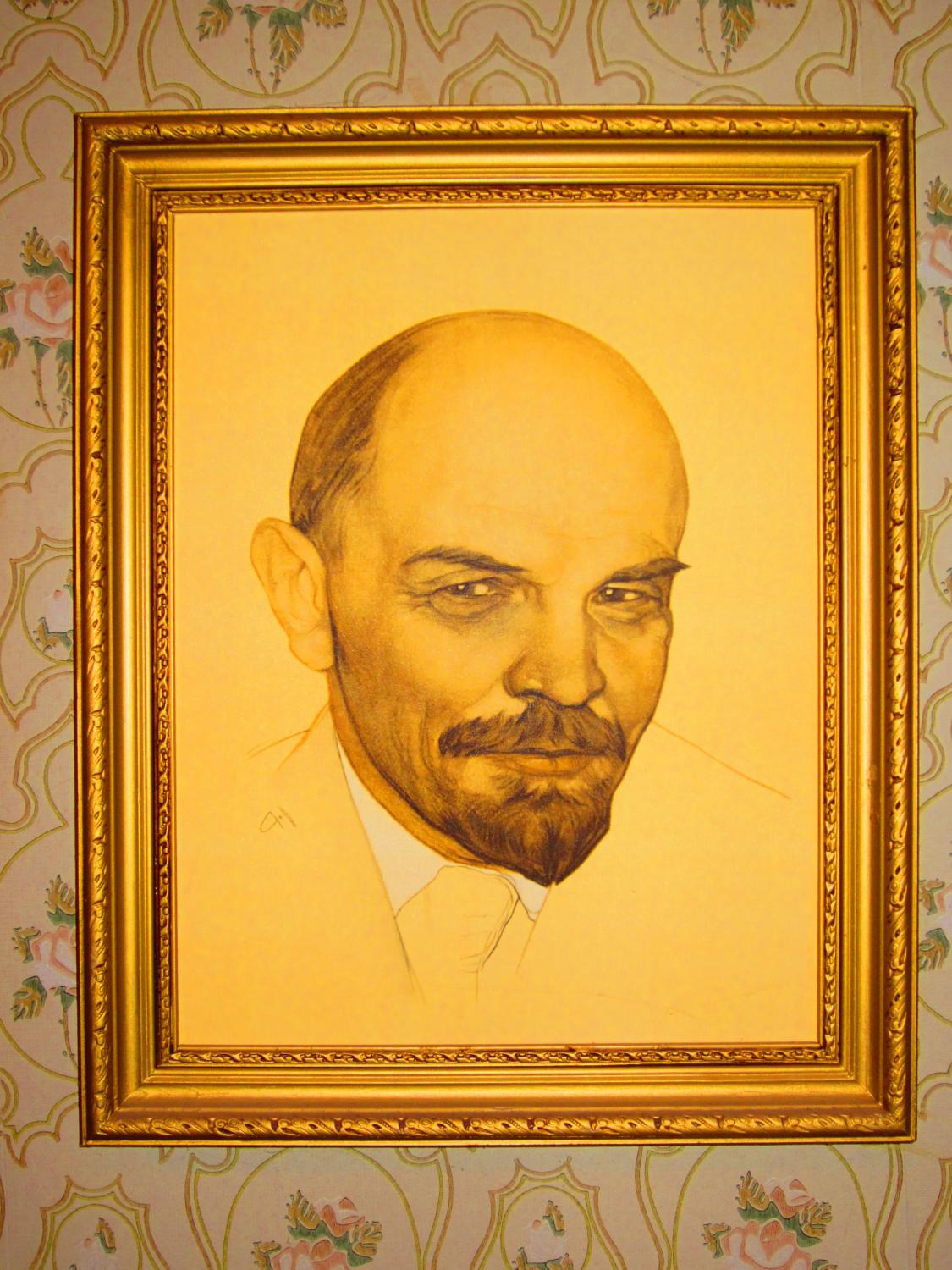 "Father Lenin." They also have a tapestry of his head on the opposite wall. 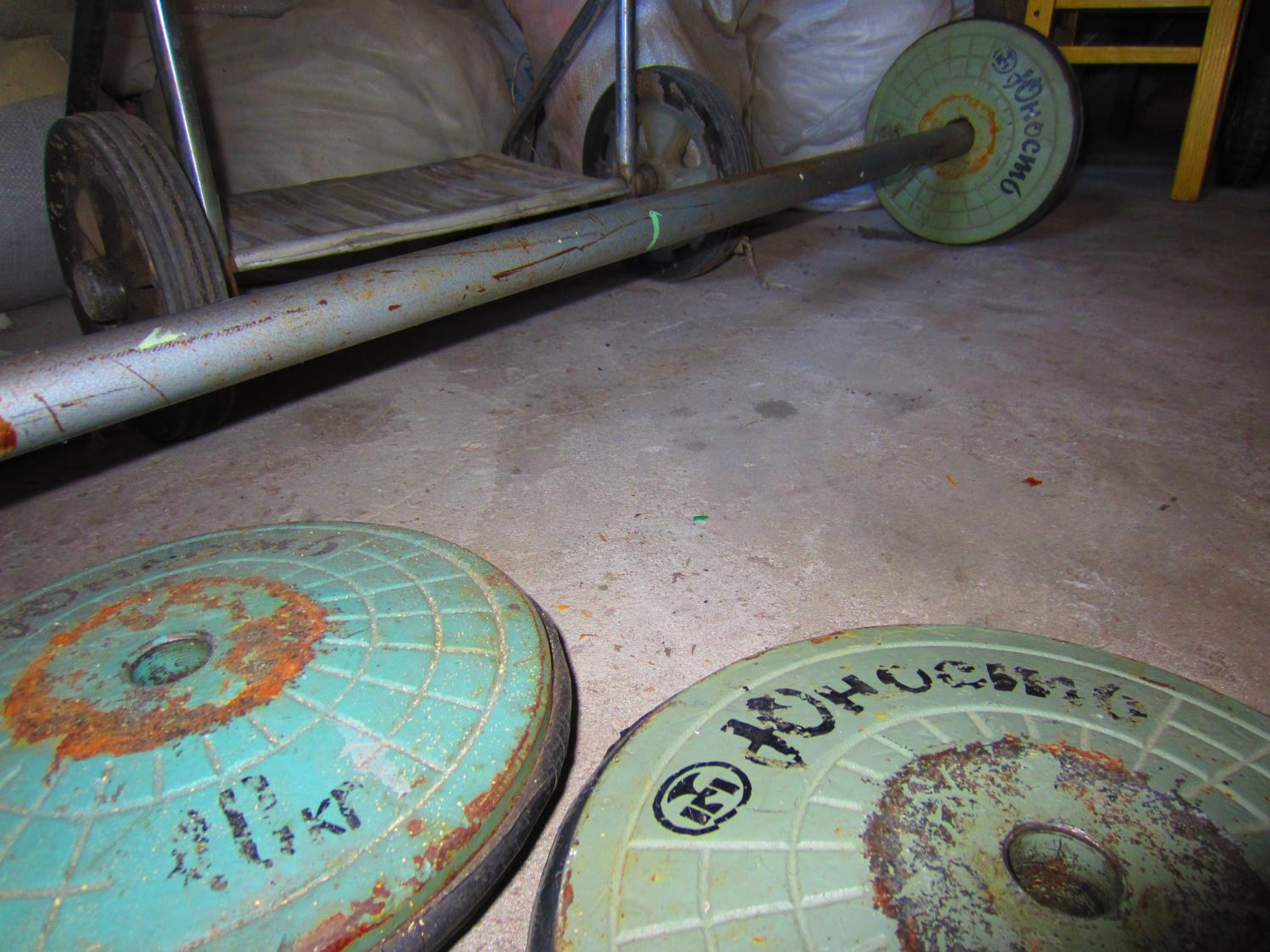 Old Soviet weights that Vasiliy used to use. After a few days working out with these babies, I felt like Ivan Drago from Rocky IV. 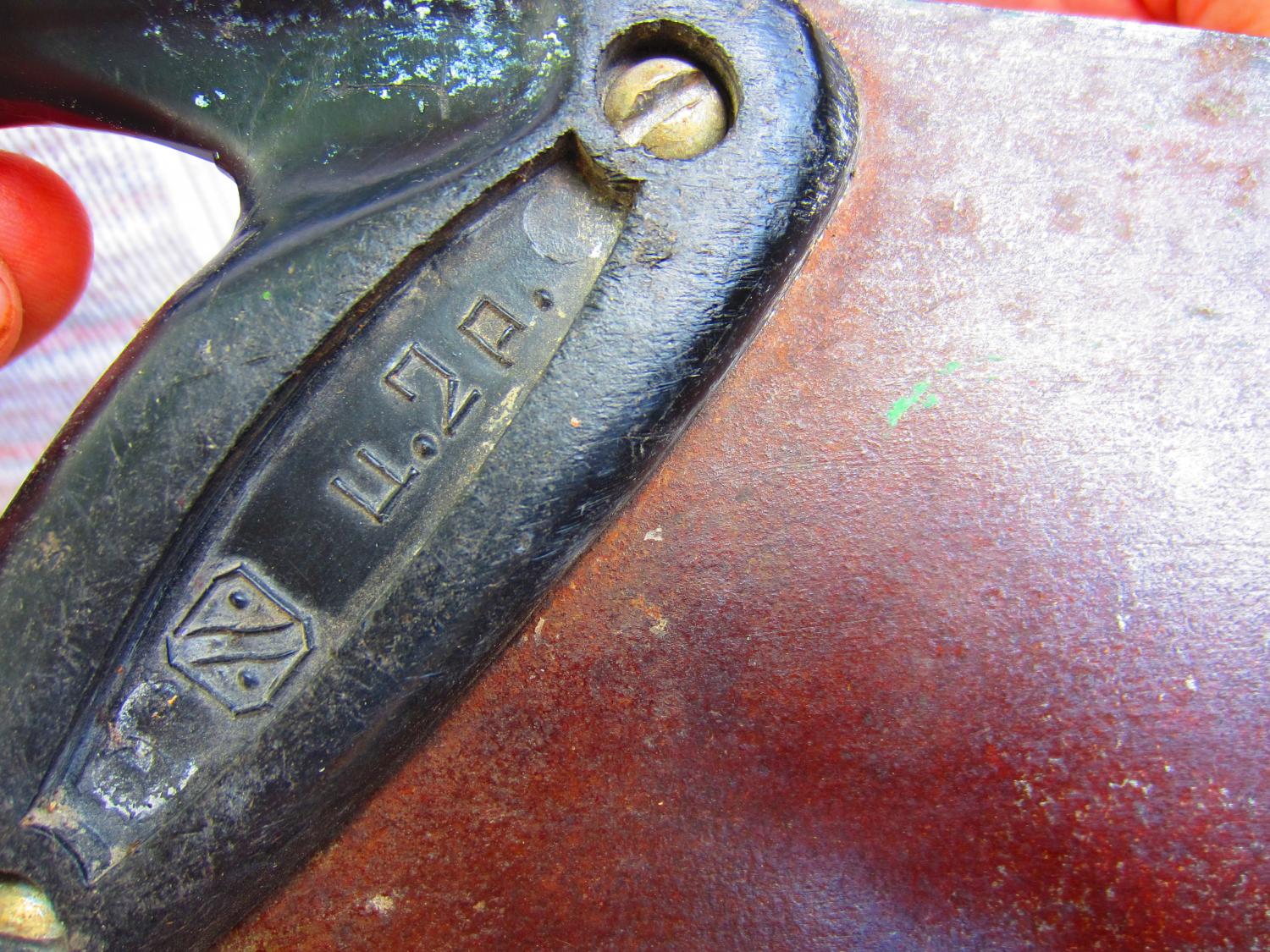 Everything from the Soviet period seems to have the price permanently imprinted on it. You can see from the handle that this saw was only 2 rubles.

The dacha itself is a symbol of how things worked during communist times. Before the Soviet Union fell, purchasing private property was unheard of. Vasiliy was given this land by his (state-owned) company, which awarded these small “throw away” plots of swampland to its very best workers. They built this dacha, had the topsoil trucked in, and made it their summer home. Even then, (especially then) you had to be entrepreneurial and proactive in order to have success.

7. Morning exercise? Please… I commute from a dacha.

From the office of Kiva's local field partner based in Kyiv, HOPE Ukraine, it takes me about 1.5 hours with four different types of transportation, none of which have air conditioning, to get here: tram, metro, minibus, and a mile walk. Most of the roads are paved, though often full of potholes. The neighborhood around the dacha, however, is a bit more rustic. It's a difficult life in many ways, but the beauty of this place is powerful and profound. For those who have to struggle daily to find their next meal, however, the beauty must be hard to see. Kiva and its field partners give people like Vasiliy and Nina a chance to find stability. Many Kiva borrowers rely on the land to produce everything they need for their agricultural business. A sense of stability and growth, I have witnessed, gives them the chance to breathe deeply and, perhaps for the first time, enjoy the beauty that this land has to offer. 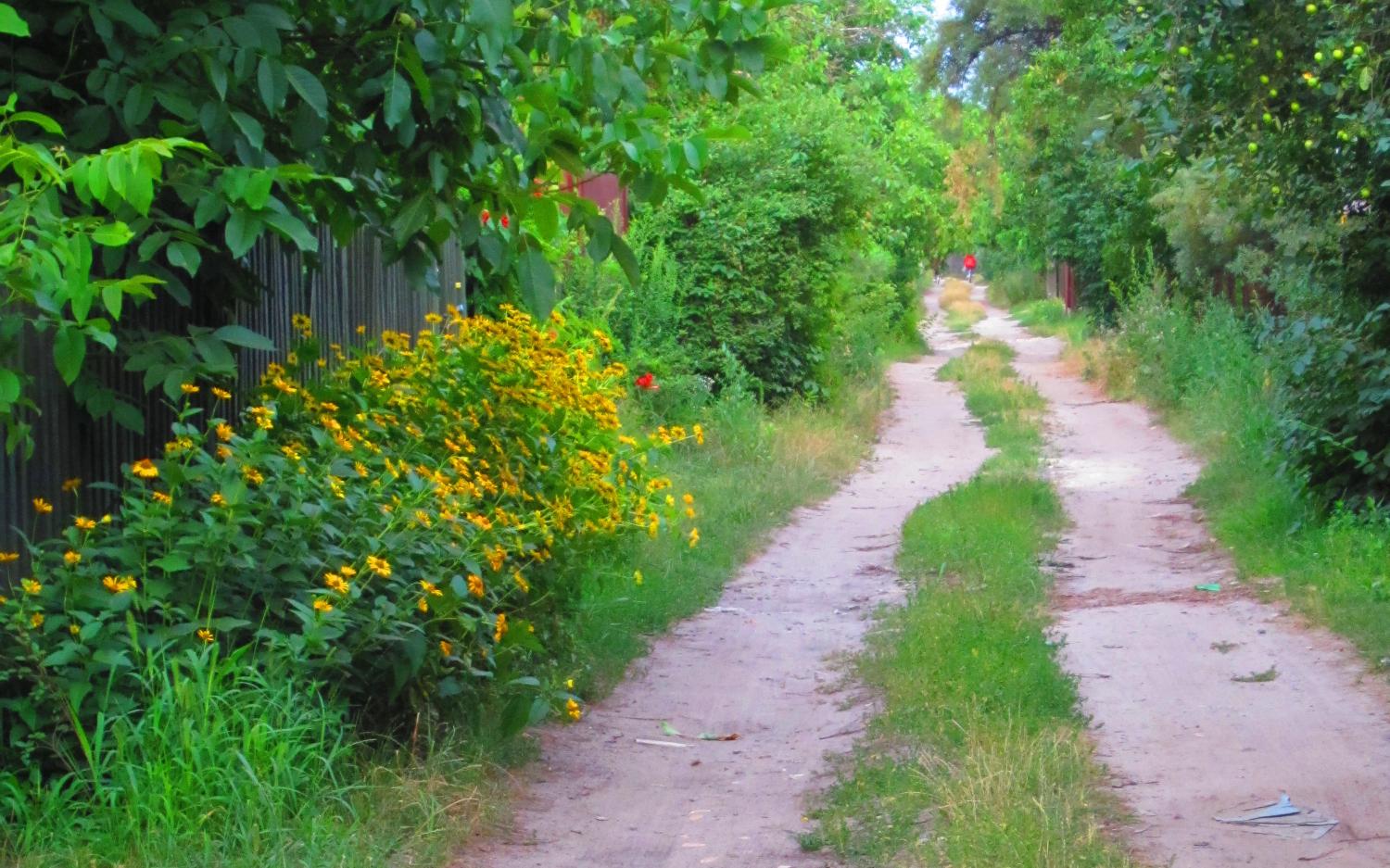 The road to the dacha. 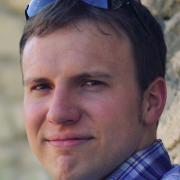 Jason Stout grew up in Utah and the Netherlands and has spent nearly a quarter of his life living abroad. He is currently getting his Master’s of International Affairs, studying international finance and economic policy at Columbia University and works as an Analyst at Emerging Market Economics. In his spare time Jason helps manage a website and podcast he co-founded, which is dedicated to advocating service and poverty elimination (NoPoorAmongThem.org). Jason’s enduring passion is economic development and human rights. He served as a Peace Corps volunteer in South Africa, volunteered in Russia with a UN-affiliated refugee NGO and volunteered in Ukraine for two years with the LDS Church. Here he managed public health projects for over 25,000 youth and provided free English education. Jason has worked extensively with refugees and victims of human trafficking in the US with Catholic Charities and Child Rescue of North America. He is excited to return to Ukraine as a Kiva Fellow. Jason is a proud husband and father of a one-year-old. They currently live in New York City, where they enjoy Ethiopian food and old Russian movies.