Watership Down and the World Happiness Report 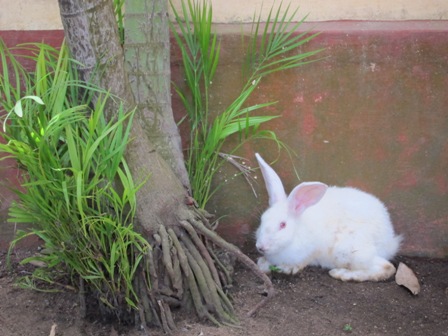 “The does, who had never dug in their lives before, enjoyed the work. Both Hyzenthlay and Thethuthinnang told Hazel that they had no idea how much of their frustration and unhappiness in Efrafa had been due simply to not being allowed to dig.” (Watership Down, Chapter 41)

This past week, a paper called the World Happiness Report came out.  According to the report, Togo came in dead last in happiness among all the countries of the world.  By no means a wealthy country, the Togolese seem for all intents and purposes like an outwardly happy people, much more if not more so than the average Canadian.  Perhaps it’s because I hail from Toronto, whose denizens purportedly live only to work, that makes me say that the Togolese I’ve met and see day to day are happier.  Despite anecdotal evidence, Canadians have it far better than those here in Togo according to accepted economic indicators.

The Happiness Report isn’t about happiness per se; rather, it’s about including factors beyond the usual economic measures to evaluate a nation’s relative progress.

Here indeed people smile and laugh through the best of times and the worst of times, which may have to do with the tropical climate, and certainly there is little to commend supposedly smile-inducing Canadian winters by comparison.  But like the sad clown, smiling doesn’t always reflect happiness; it may just be the surface expression of a cultural trait.  Likewise, happiness in the Report is just a way of saying social-economic indicator. 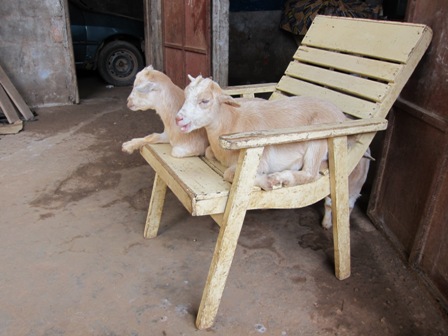 Are these goats any more or less happy than if they were at rest on the ground, or on some hay, or in a grass field in the verdant Swiss mountains? For the author, he was happier the moment they got off the chair and he was able to sit down. Then he thought about having goat for lunch.

The broad strokes of what marks a developed society over a developing one is a growing and diverse economy,  universally accessible education and health care, financial and personal security, a protected natural environment, a safe water supply, a stable food supply, good physical infrastructure, and a government and judiciary that reflects and defends the interests of all citizens. These elements also describe the general work plan of the international development industry.

My difficulty with international development—or development in short—is that it all too often does the work of a national government.  It is a parallel system that advises, consults, and implements projects that ultimately try to improve a country’s standard of living according to what makes any given developed nation what it is. Crucially, as a taxpayer of a democratic state, you are entitled to hold your government accountable for the activities it undertakes with your money; so goes the principle of no taxation without representation.  For a citizen of a developing nation, however, the development agencies who operate in their country are not theirs to influence in this manner, since it’s not their tax dollars that are being spent. 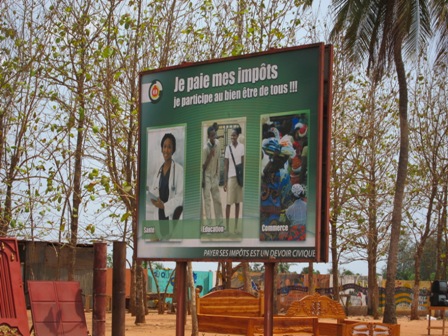 Translated, the headline states "I pay my taxes - I contribute to the well-being of all!!!" The final statement along the bottom edge notes that "Paying your taxes is a civic obligation". How quaint; how pat; and how nonetheless true.

Or aren’t they? At present, development agencies rarely operate independently: they tend to work side-by-side with the local government and hire local people, in what is known as bilateral development or development co-operation. In the private sector, this is the equivalent to when a consultant is brought in by a business to improve its operations.  While apropos, the analogy is problematic since a government has a more complex and diverse set of objectives than a private enterprise. Government can’t be boiled down to a balance sheet.  Certainly, a country’s expenditures shouldn’t exceed its tax base — but beyond that, how these expenditures impact a society manifests itself in dimensions that are very hard to describe simply by examining net outflows of capital.

A company that opens itself to external consultation also willingly undertakes restructuring to improve; a nation run by a dictator is less motivated to encourage political opposition, though they would dearly like to have some help improving their industry and access to the global marketplace.  The weighty question, as posed by critics of development, is whether it is better for a development agency to withdraw from a nation led by a dictatorship or remain present and mitigate the impact of authoritarian rule. 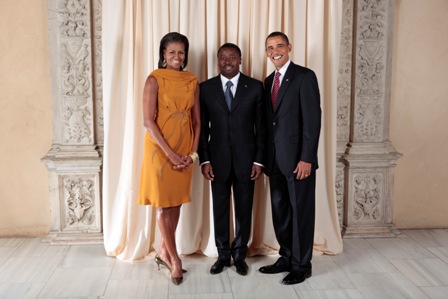 President Barack Obama and First Lady Michelle Obama pose for a photo during a reception at the Metropolitan Museum in New York with H.E. Faure Gnassingbé President of the Togolese Republic, Wednesday, Sept. 23, 2009. (Official White House Photo by Lawrence Jackson) In 2005, President Faure Gnassingbé electorally succeeded his father, Eyadéma Gnassingbé, President of Togo from 1967 until 2005.

With development, there is also a quid pro quo to the arrangement: it’s not all about good will.  The nation providing development services often asks for the deck to be stacked in their favor with regards to trade relations.  Is it unusual that German and French products are essentially the only manufactured goods available in Togo other than those produced in China?  Not really, given Togo’s colonial past and the strong presence of German and French development agencies in the country. But if trade relations are indeed patterned by development aid, it too can be called morally reprehensible since development is technically done in the name of altruism.

The complement to this line of thinking is China’s approach to the African continent.  Theirs is one of unadorned capitalism, which alarms many in the development sector.  What China offers to African nations is simple: China will build roads and highways in exchange for rights to raw natural resources.  The roads built, incidentally, allow for improved penetration of Chinese-produced goods to in-land African markets.  Beyond that, China doesn’t want to get involved in the often messy and morally complex business of development. In this same way, China wants to do business with the world without anyone telling it how to take care of its own people.  This is development viewed from another angle: foreign investment construed as foreign interference in domestic policies. 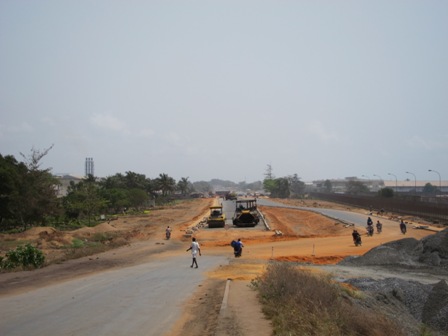 The highway that leads east from Lomé to Benin, Nigeria, and beyond. As it is with most all major roadwork in Africa, this project is being handled by the People`s Republic of China.

So what does any of this have to do with the Happiness Report? The report looks at elements beyond the leading standard of contemporary economic doctrine — that is to say democratic capitalism.  The idea is that democracy most efficiently enables capitalism and, vice versa, capitalism will bring about the most economically efficient form of government: democracy.  I question whether this is true. We return once again to the example of China, which has had tremendous economic success fueled by investment from all the world’s democratic nations while it maintains a vigorous line against alternatives to its Communist Party system. This is its prerogative as a sovereign nation; whether it is right or wrong is not the point.

If the Report is to be believed, China is a far happier — and better — place to live than Togo. On the list between China and Togo are some well-known places where many might not be so happy, such as Afghanistan, the Sudan, and Haiti.  As someone who participates in development as a Kiva fellow, I have a constant interest in knowing how a country has benefited from the activities I participate in.  While not an enthusiastic fan of strictly economic indicators, I realize there is something to be said for raising average incomes; there is also something to be said about happiness, since this is not necessarily achieved by money alone.

The founding fathers of the United States recognized that the pursuit of happiness was as important as life and liberty itself. Crucially, they distinguished that happiness alone is not a right, but the right to pursue it is.  In this light, the report makes more sense, because it looks at people’s relative ability to pursue happiness.  Indicators only reveal their true usefulness over the passage of time as they can accurately track improvement or degradation. For microfinance, a base assumption is that increased access to credit will not only improve incomes of entrepreneurs, but also improve the lives of their families. Given this, it may well be that microloans even contribute to the greater happiness of a society as a whole.

Michael Slattery (KF 17) is serving as a Kiva Fellow with WAGES in Lomé, Togo. Find a borrower and lend today!