“Sustainable” Tourism in the Quirimbas Archipelago: Sustainable for Whom, Exactly?

The Quirimbas Archipelago in Northern Mozambique is a paradisiacal chain of 24 verdant islets blessed with the tropical vacationer’s holy trinity: ivory sands, ubiquitous royal palms, and resplendent turquoise waters . Last weekend, I was fortunate enough to have the privilege of visiting Quirimbas, which – I figured – would be a pleasant respite from the toils of city life. 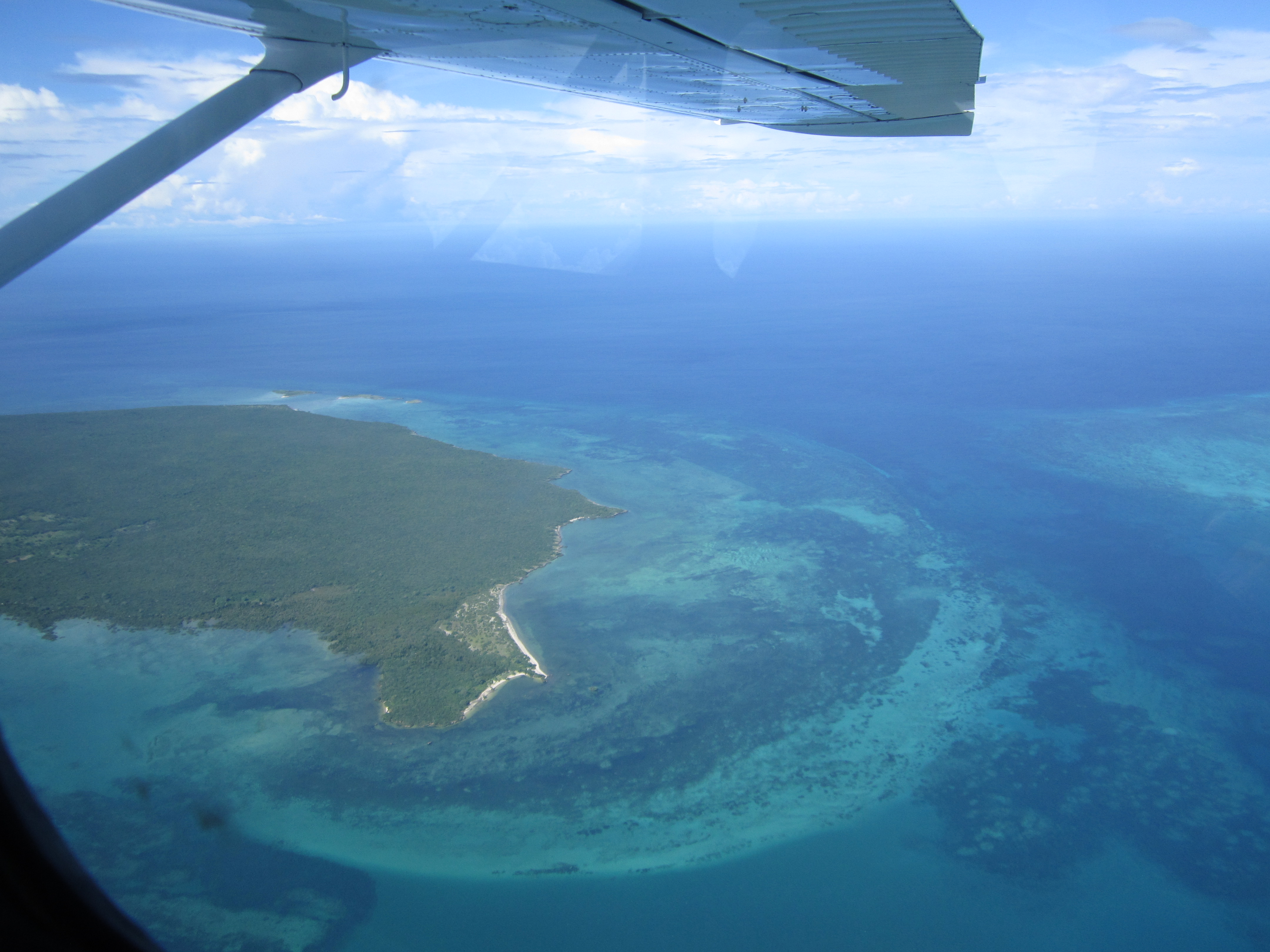 View of the Quirimbas from our somewhat terrifying 4-seater plane.

From what I was able to gauge from my guidebooks and conversations with previous visitors, the economic landscape of the Quirimbas is rapidly evolving. Prior to 2006, the islands were largely neglected. There was no electricity, scant provision of other public goods, zero transportation, and little commercial activity beyond small-scale fishing and agriculture. Now that the archipelago has been “discovered” by the “sustainable” tourism industry, foreigners are buying up property, streets buzz underneath the newly installed power lines, and charter airlines and boats are travelling several times daily to the main island.

Pemba, the jumping-off point for the archipelago

However, from the moment I arrived, I felt inexplicably uncomfortable despite the appealing aesthetics and tranquil maritime ambience. Over the course of the next four days I spent on the archipelago, I struggled to rationalize how my ill-at-ease could persist in the face of such an idyllic setting. I spent much of my time wandering aimlessly through the islands’ faded, shell-strewn avenues , trying to determine if my unrest was rooted in the Quirimbas’ unfortunate notoriety as one of Portugal’s main slave holds, or perhaps its use as a detainment site for political dissidents in the Mozambican civil war. I decided that these explanations were entirely too obvious, and shelved my discomfort in an attempt to enjoy my remaining vacation time.

Then, on my last day on the islands, I finally figured it out.

My fiancé and I had planned to travel from Ibo, the larger main island, to Matemo, a smaller neighboring islet by dhow (a boat left behind by the Arabs characterized by lateen, patchwork sails). After consulting our hotel management and our trusty Lonely Planets, we were dismayed to discover that boat transport would be cost-prohibitive for us. The cost of a daily charter for one of the motorized dhows docked at the harbor would set us back US$ 450 (i.e., one-half of  Mozambique’s GNI per capita). Both the guidebook and our hotel advised that we book travel with captains with names like Pieter, Jaime, and Elizabeth. In other words, probably not Mozambicans.

Watch out for the low tides. Your dhow will be rendered completely useless.

We ended up doing what any cash-strapped traveler would do: we ditched the guidebooks, ignored the advice of our hotel, and decided to bargain with the locals. For the insanely reasonable amount of US $30, “Moussa”, a soft-spoken  Makua fisherman with a somewhat leaky dhow, would sail our broke behinds wherever we pleased.  Although it ended up being more Kon Tiki than Queen Elizabeth II,our trip to and from Matemo was fantastic (minus one rogue squall which almost sent us to Davy Jones’ Locker, but that’s another blog post). Moussa was not only a skilled navigator, he was knowledgeable of the area, humble, and kind.

Back on terra firma, talk turned to business over an ice-cold Laurentina with Moussa. We inquired as to why he didn’t advertise himself as a captain for tourists. After all, with the influx of foreigners clamoring for dhow transportation to and around the islands, surely there was a profit to be had. I will always remember his answer.

It turns out that Moussa had been driven out of the market by the island’s exclusively foreign-owned tourism industry. As someone who speaks limited Portuguese (the local language is a Swahili derivative), and no English, Moussa cannot interact with potential clients in the way that the South African and European captains can. This allows the latter to take advantage of oligopolistic competition and collude to charge exorbitant prices to tourists who would likely prefer – if the opportunity presented itself – to support the local economy, save a couple hundred dollars, and sail with a local.

Our (for the most part) seaworthy dhow in the distance.

On our way back to Maputo, I could not turn my thoughts away from this insidious form of “development”. Essentially, these foreign investors are – hopefully unwittingly – engaging in irresponsible capitalistic ventures which are having ruinous effects on local markets. Perversely, many of these undertakings are operating under the guise of “sustainable” tourism. Sure, the hotels may use solar panels, recycle rain water, and – to their credit – make efforts to employ locals. But, sustainable tourism is not just about environmental preservation. It’s also about providing a living wage for your staff, respecting local markets, and – in the case of Quirimbas – educating travelers on the impact they are making on a population entirely unaccustomed to foreign influence. Unfortunately, it appeared that none of these measures were being implemented while visiting the islands. The more I reflected on what I had seen during our trip, the more disturbed I became.

Ibo island is filled with the remains of decaying Portuguese-style buildings, many of which are being razed to make way for foreign-owned hotels.

I’ll start with the hotels. The first place we stayed in claimed to be devoted to sustainability. Owned by a white South African couple, the property was unreasonably large considering the small size of the hotel itself, spanning a wide swatch of formerly public coastline and, bizarrely, closed in by barbed wire fences (it turns out that the hotel does not exactly have a fantastic reputation among the local population). Besides the disconcerting security measures, the hotel management was similarly disappointing. We fell asleep and awoke to the sounds of the owner barking at her obviously overworked local employees in her broken Portuguese, as they labored away shirtless and shoeless under the punishing equatorial sun. It was clear she had made little effort to learn local languages, or respect the physical limitations of her staff. She also complained constantly about a lack of funds (presumably, her rationale for paying her staff poorly). Despite the fact that my fiancé and I were the only two guests, the establishment kept their anachronous flat-screen TVs, expensive internet connections, and lights blazing 24/7. Clearly, the establishment’s  monetary concerns were not a huge impediment to paying staff a dignified salary. 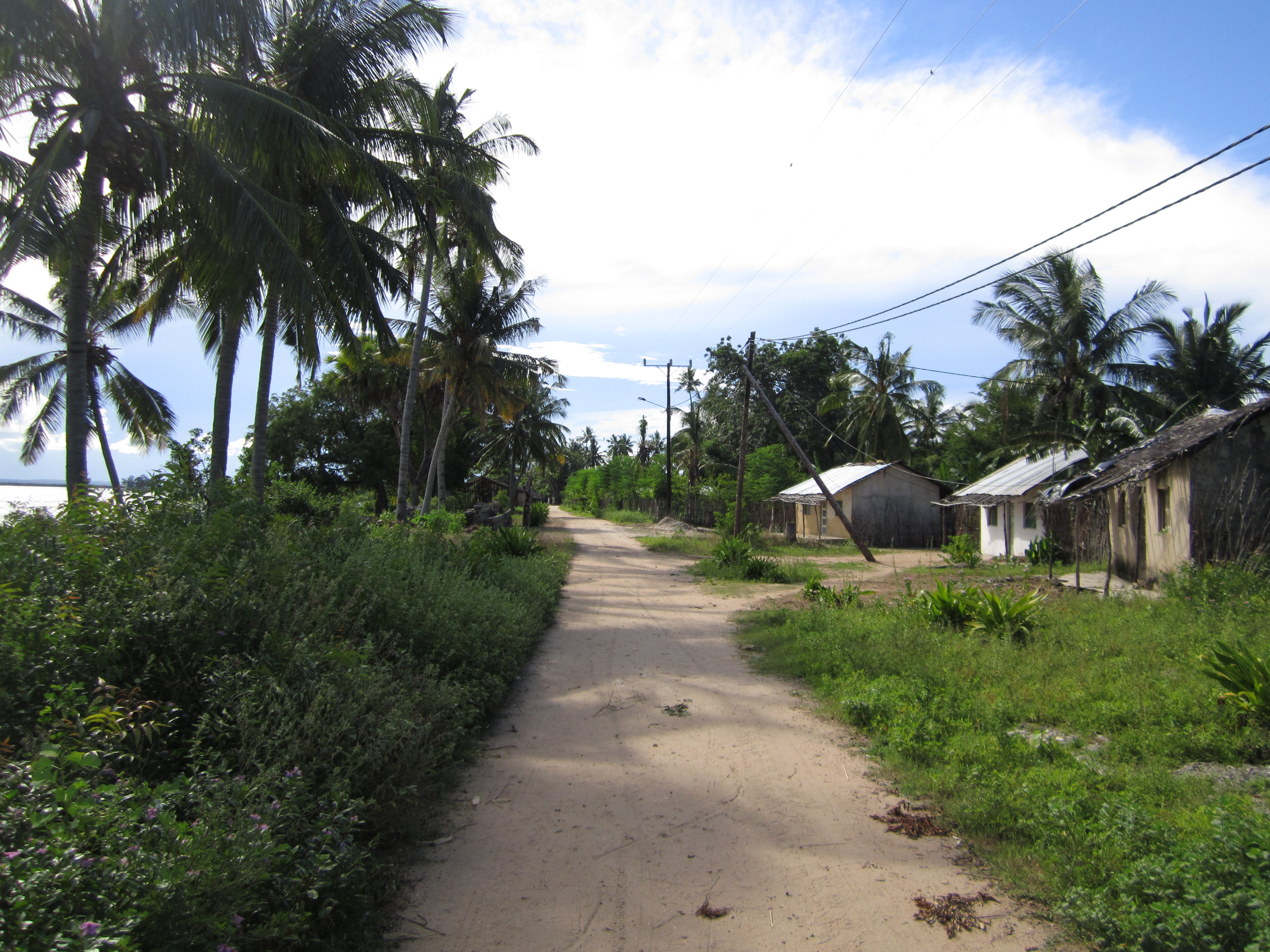 Electricity is new to the islands, as is tourism.

The second problem was the food. I was dismayed to discover that none of the meals offered at foreign-owned restaurants and bed-and-breakfasts were locally sourced, and instead consisted of a medley of imported South African vegetables and meats. In one hotel, we were told that this was because the native fishermen had “overfished” the area, and therefore local seafood consumption was discouraged. Another establishment cited the fact that South African produce is cheaper, and therefore the hotel did not buy from local farmers. However, I had to ask myself which was worse: one less fish in the sea and slightly more spent on produce, or the environmental degradation and economic fallout caused by raising and transporting beef and denying local farmers business.

Well, hello there. Goats are ubiquitous on the islands. They are rarely consumed (unless for a special event).

The final problem, again, lies in the transportation situation. Already comparatively wealthy foreigners have purchased dhows, attached motors, and offered transportation to unwitting tourists for inflated prices in the name of “comfort” and speed of travel (local dhows do not have motors). Add into the mix that the captains are able to converse with prospective passengers in their native language, and you have a perfect recipe for driving local dhow captains out of the market entirely. Don’t want to take a boat? Your other option is flying…via a South African charter company with an all-South African staff.

What I saw of the tourism industry in Quirimbas is not far removed from the rent-seeking behavior of foreign-held companies which profit off of natural resources at the expense of the local population (certain oil companies in the Niger Delta come to mind). The tourism industry in the Quirimbas is similarly able to capitalize upon the richness and splendor of a land that is not theirs, while simultaneously degrading the livelihoods of its inhabitants. Let it also go on the record that not one, not one tourist-oriented business on the island was Mozambican-owned.  I’ll stop short of saying all of this felt colonialist, but it was certainly disturbing.

Getting around on Ibo: What happens when you can't drop $450 on a boat. Shout-out to my fantastic guide (and expert wader), Mando, in the background

Nothing in this post is meant to suggest that foreign investment in Mozambique is inherently predatory. Nor is it meant to imply that foreigners who open tourist-oriented businesses have anything but the best intentions. Much to the contrary, responsible FDI and tourism can have lasting benefits for local economies where investors are sensitive to cultural contexts and socioeconomic realities of the communities in which they operate. For example, on my way to work, I pass an impressive agricultural complex opened by a company from China (the number one source of Mozambique’s FDI). The complex serves an educational center for rural youth to learn modern agricultural production methods and associated technologies. Similarly, KF 17-er Heather Sullivan shared this great example of community-run tourism in Ethiopia. This is the kind of corporate social responsibility and grassroots initiatives that I wanted to see in the Quirimbas. Why not turn off the flat screen TVs, save on utilities, and pay your staff a dignified wage that puts them on a path out of poverty? Why not forgo imports and buy locally? Why devote a portion of the profits from taking tourists out on your dhow, and create a fund to provide language lessons for local captains? After all, a diverse economy is a healthy economy, and the islanders should have the opportunity to run their own businesses, not just work for them.

The ghost of dhows past.

None of the ideas I’ve just put forth are novel in the least. Corporate social responsibility and community-run tourism are no longer new concepts. So, I fail to understand why it is not taking place in a region so rife with opportunities for the development of human capital, and so dominated by purportedly “sustainable” tourism ventures. It’s unclear for whom these ventures are sustainable, but it’s clearly not the local population. A solar panel alone does not a sustainable business make.

The village of Ibo.

What is the point of this lengthy rant? Honestly, I’m not entirely sure, besides the fact that my experience on the Quirimbas has lent me a newfound appreciation for all that microfinance has to offer the working poor. Had there been an effective MFI (or any MFI, for that matter) on the islands, I could imagine Moussa taking an English lesson or financing a motor for his dhow. I could see local farmers microleasing agricultural technologies to allow them to compete with South African produce importers. And, eventually, I could picture an island where locally-run lodging vies for business with foreign-owned hotels.

I believe in the potential of the Mozambican microfinance industry to reduce the sort of economic injustices I saw in Qurimbas, and hope you will as well. If you are interested in making a loan to a Mozambican through my host MFI and combatting financial exclusion , you can do so here.

Sidenote: Should you happen to find yourself on the islands, I highly recommend eschewing foreign guides and captains, and instead asking around for Moussa (captain) and Mando and Messi (tour guides). You’ll be supporting the local economy, and you’ll get a much better insight into the islands’ fascinating history and culture.

Micaela Browning is a Kiva Fellow working with Hluvuku-ADSEMA just outside of Maputo, Mozambique.