Who are these handsome devils? 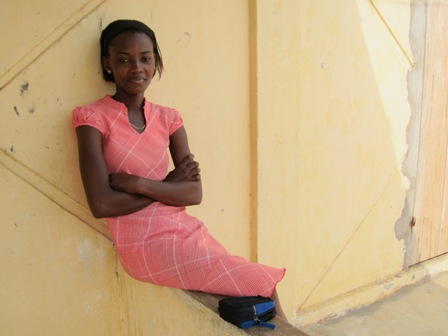 Loan officer AMETEPE Kafui, who waited patiently for the foreigner while he made pretenses to know what he was doing with the camera.

Previous to the Kiva Fellowship, I worked for the Canada Revenue Agency, Canada’s federal tax department.  It was the only job I’ve ever had where I was reluctant to tell people what I did for a living.  While working for the Agency carries with it a certain stigma, the job itself can be described as people management; you learn to understand and quickly read your fellow citizen and how best to communicate with them, all the while recalling that you’re there to serve their best interests.

I make mention of this because the skill set I employed working for the taxman is very similar to that of the microfinance loan officer. 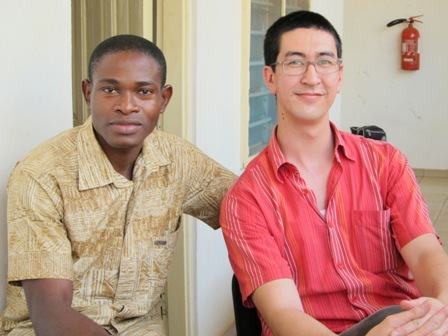 For the past three weeks, I’ve accompanied loan officers from the six branches at WAGES that handle Kiva clients.  The refrain I heard from nearly all of them was that in direct reference to the clients, ‘You have to defend yourself’, (“Il faut se defendre”).  Aha, I thought, this is a position I can relate to.  As a tax service agent, I was accused of causing the death of loved ones, divorce, emotional breakdowns, unhappiness, immorality, and most memorably, birth control.  Whatever the accusation, the actual basis of the affront was that the taxpayer had an outstanding balance and didn’t want to pay it; in these instances my role was to explain why it would be better for them to pay it than not.

In similar fashion, loan officers are the best friend of borrowers—that is until borrowers have trouble paying back the loan. 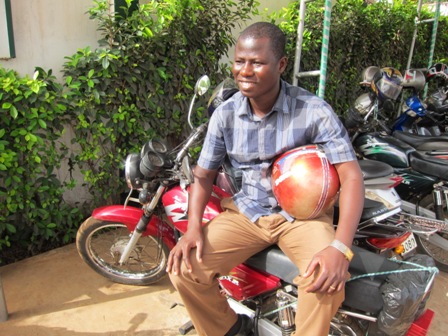 At WAGES loan officers are granted a great deal of discretion, and this discretion dictates where they go, when they work, and how they go about their tasks.  They have first and last word in whether to accept or refuse a client and this relates to the fact that they are ultimately responsible for the money lent to the client.  Professional responsibility aside, their income is deeply affected by commissions pegged to their cumulative portfolio repayments per month, which can mean that if one large repayment is late, they could conceivably see up to a two-thirds reduction in their monthly paycheck. 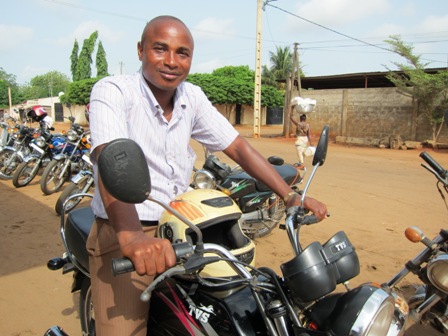 Loan officer SIABI Kodjo Joe, the most congenial fellow you're likely to meet, and a mean midfielder.

Taking on a client is accordingly a seemingly ad hoc affair.   When a client comes to WAGES for a loan and they’ve set up an account, they are directed to the loan officer offices situated beyond the front office of bank tellers and client service personnel.  Four or five loan officers will share a single office and perhaps three desks; the client enters this tight space and by luck of the draw is invited to sit down by one of the loan officers.  Greetings are made—essential preface to any and all discussions here—then the amount is broached and the terms are established.  The loan officer reviews the loan on the basis of several criteria: business potential, business plan, income streams, guarantor or guarantee as necessary, and last, but most importantly, client personality and disposition. 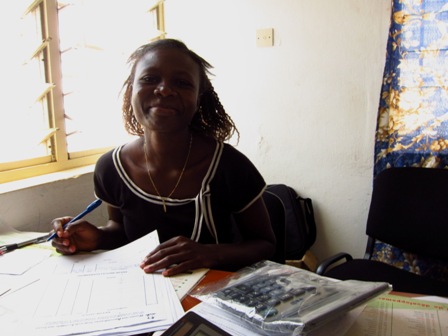 If the loan officer suspects, even for a second, that the client might pose a problem later when repaying, they will refuse the loan.  The client, however, will likely be told instead that the loan officer is too busy at the moment to take on a new loan.

Alternately if it is a returning client, the loan officer naturally bases their approval on past performance.  For example, some clients perform well for several loans, but come the fourth, they play truant with the repayments and the loan officer exhausts themselves chasing down each payment.  In such a case, their loan officer will likely refuse them for another loan, even though the client may, in theory, be good for a larger loan, which would be better for the MFI, and also for the loan officer. 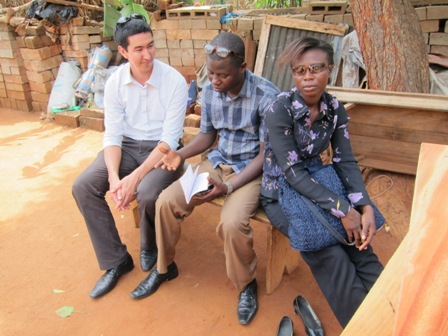 Indeed over the course of two days, at two different branches, I met the same client who was seeking a new loan; she had had several previously without issue, but during the course of the last one had had such problems adhering to her repayment schedule that her loan officer refused her for any subsequent loan.   At the second branch she was at the client service desk, pleading her case with the service personnel, and even me.   When I asked later after her, the alternative presented was that if she were refused at the second branch, she could continue on to next, and so on.  If all refused, there are other reliable microfinance options in Lomé.  The challenge would be that her credit limit would be far lower than she would want. 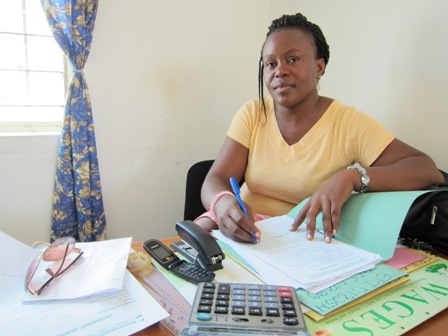 Loan officer OURO-GBELEOU Zoweriatou, big hearted, and not to be messed with.

The reality is that clients in this position are as likely to have been victims of their own actions as they were of external factors.  The loan officers I’ve met are universally what could be called good people, and bring the human touch to their work.  Clients who suffer from deaths in the family, late delivery of goods, and so on are treated fairly.  In this way loan officers are responsible, hard working, often charismatic smooth talkers, and always excellent communicators.  Their position demands this last quality of them while simultaneously forming them. 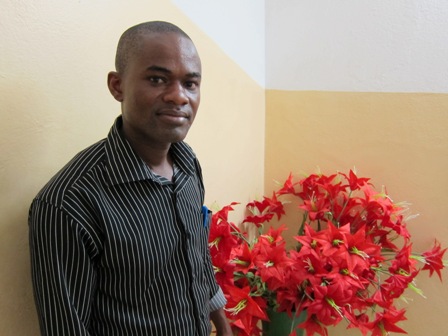 Logistics demand, too, that the loan officers commit themselves to field work, daily: visits to markets, offices, restaurants, carpentry yards, housing developments, and just about anywhere business takes place—that is to say, everywhere.   For anyone who has been on the continent, dust is ubiquitous and the sun’s heat is draining; where most Togolese settle in for a nap around the hottest time of the day, loan officers are out and about, breathing raw diesel fumes and getting stood up. 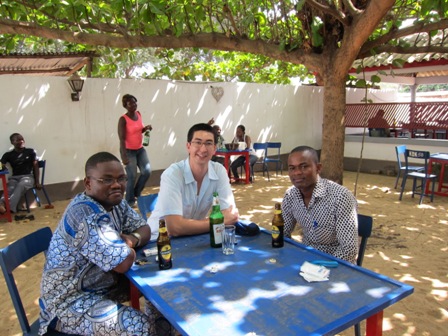 Loan officers AGNILO Kokou Jean-Luc and TONYI Mawuli, at the end of a long week that ended, fortunately, on time.

Clients lead busy lives, they manage inventory, go out of town to pick up raw goods at discount, as well as manage their households, families, and even other business interests.   In regular circumstances, this is good news to any loan officer, since it means income generating activities are underway and loans can be repaid.  When it comes down to late repayments, clients, however, have a convenient way of being unavailable, or at the market, or anywhere they said they would be, repeatedly.  The net result is that loan officers are on the road a great deal, spend inordinate amounts of time calling their clients, and are often at work for twelve hour days. 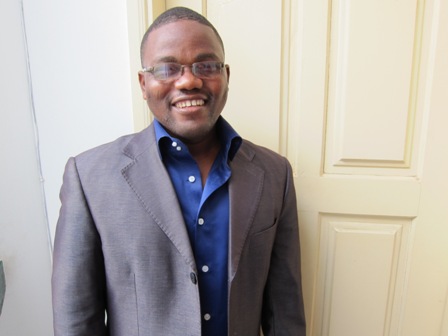 Files are updated in the early evening and it is frequently the case that as loan officers are leaving for home, a client finally calls them, and they must head back out to meet them to settle accounts, even as the sun sets and the rest of the town makes ready to settle into the evening calm. 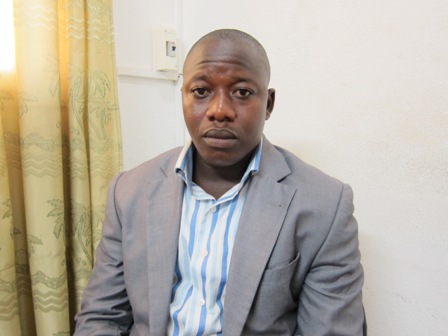 Loan officer AZAMATI Kossi, my first loan officer, and the one who taught me the value in recognizing hot peppers from green beans.

I recognized how onerous it can be to have a six foot four white guy follow you around for two days while you try to get your job done, so I offered my services to the loan officers in exchange for their patience and understanding.  This is how I found myself in a Nigerian restaurant pretending that I was authoring a specific repayment report on the client’s behavior, while being harassed by a group of hungry men whose lunch was being held up by my posturing.  Nigerians in Togo have a mixed reputation, known both to be shrewd and successful businesspeople, but also occasionally unscrupulous in their transactions: their French diminishes in direct relation to how late their repayment are.  The loan officer in question is herself an impressive person, excellent English—unusual in Togo—and fearlessly assertive. 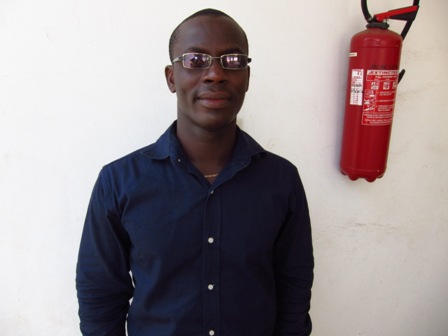 Loan officer YEBOVI Ayi Stéphane, who introduced me to three kinds of food in one amazing day of non-stop eating.

“This is real African food, white man, real African food!” the client said to me, waving a ladle, while I nodded appreciatively and tried my best to seem intimidating.  If anyone here thinks that as a tall Canadian male I can intimidate a Nigerian mama in her kitchen, think again—I was about as effective as a flyswatter against an elephant, or about as intimidating as I am against my mother in her kitchen.  Despite my appearance and the threatening statements made by the loan officer, the client only stated that she would have the money by tomorrow at 11am, an improvement, it must be noted, from her earlier statement that she had no money whatsoever.

Such is the way of the loan officer, an accountant, diplomat, sociologist, collection officer, and psychologist all rolled into one.