Usually when I've been in places that I declare to be "artificial" I am thinking of a Disney theme, or a place like Cabo San Lucas or Cancun - southern California or Florida transported to Mexico - a place which bears little resemblance to what it would be like if it weren't for the tourist dollars it was created to attract. Of course, Las Vegas is the archetype for turning a desert into a sweet water oasis, of sorts.
The Jesus statue from the hills above Dili.

Standing Firmly on the Ground

In western mythology the phoenix, rising from its own ashes, represents cyclical extinction and regeneration; death and re-birth. Human stories lack the mythical qualities of the tales they inspire.

"On 30 August 1999, in a UN-supervised popular referendum, an overwhelming majority (78.5%) of the people of Timor-Leste voted for independence from Indonesia. However, in the next three weeks, anti-independence Timorese militias - organized and supported by the Indonesian military -... 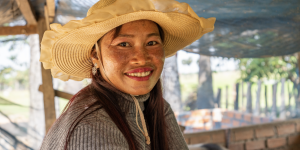